In 1932, the family of the late Episcopal Bishop C.M. Beckwith donated his summer home on the west side of Weeks Bay to the Diocese of Alabama. The buildings on the 40 acres of timbered land had been destroyed by fire in 1927, and the church was forced to immediately take possession of the land in order to stop depredations from occurring to the property.

Under the leadership of Rev. J. Hodge Alves, director, and his brother, Walter Alves, 23 boys spent two weeks camped at the site in the summer of 1933. The group cleared some of the property, drove a well, built a log cabin and developed a deep appreciation for the land. “We who have lived with and worked for Camp Beckwith for two weeks are naturally partial to it, ” wrote camper Herbert West. “We have invested in it a great part of our physical interests and moral and spiritual support and somehow feel that a part of our personality is located on the site.”

It was a long time ago, but I do remember our venture at Camp Beckwith. I believe it was 1933. We were charged with the job of making the old Bishop Beckwith property a functioning entity, so that the Episcopal Diocese could retain it. Certain countrymen of that area had filed squatter’s claims on the property, and the Diocese was about to lose it.

So, under the direction of the Rev. J. Hodge Alves, plans were made to build a cabin and to make a camp at the Beckwith property. I recall quite well that there were some 10 or 15 boys, part of them from Mobile, part of them from other areas, some of them from the church home, who took part in this. 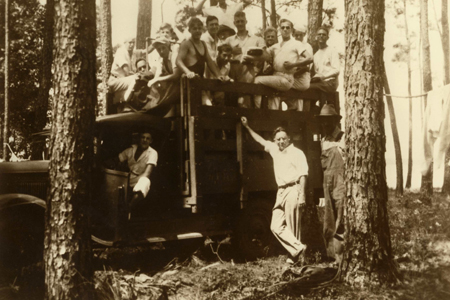 We located the Beckwith property, moved in, and began to clean it up. There was Alves, who was the big honcho, and I guess I might have been considered a straw boss. Marshall Seifert, who was more or less in charge of pictorial history of the venture, took numerous photographs. Chief Walker, a Creek Indian from the reservation at Atmore, I believe, came down with one of his tribesmen and a mule to help us get started building a cabin.

The first thing we did, after setting up camp and getting a kitchen and mess hall area temporarily set up, was to drive a well. That consisted of a piece of pipe with a special point on the end with strainers that you drove down into the sand and then attached a bucket pump to for water. The people of the area more or less understood the depth you had to go. After getting this set up and temporary sleeping quarters, we began cleaning up the grounds. Chief Walker and I selected long-leaf pines of the proper size and length for cabin structure, and we proceeded to build a log cabin.

After things had moved along a ways, we constructed an outdoor altar, where we held evening services. I remember how beautiful it was looking over Weeks Bay at sunset through the palmetto palms and long-leaf pines.

I remember some interesting things about that Beckwith venture. I remember the bottleneck, which was the little narrow place where you 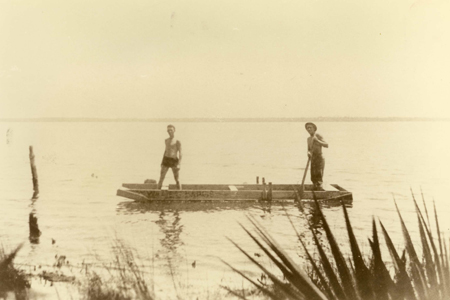 could wade across this area that was not more than waist deep at low tide. Of great interest to all of us was the fact that we received our mail by way of a boat from Magnolia Springs. If you had no mailbox, as we had none, you would go out in a boat or wade out to meet the mailman. Some distance up Weeks Bay, there lived an old gentleman from New York state whom everybody spoke of as the “hermit.” He was fairly friendly, and I remember we thought it was of great interest that this old man read the New York Times daily.

We also had lots of fun swimming and playing in the water. We enjoyed catching flounders, with flambeau as a means of light, and using spears. Oftentimes we were able to get a good mess of crabs. On one particular evening, a bunch of young ladies from the parish and the church home came over and brought a banquet type of picnic, which was enjoyed by everyone.

The work proceeded quite well, in spite of lots of rain.

An Ordinary Day at Camp

After a morning dip, morning prayers in the chapel and breakfast, the boys worked on the property. As a result of their work, there stands finished one rather large log cabin, Pioneer Cabin, and one half completed, to be known as League Cabin.

After dinner, swimming, boating, fishing and other activities occupied the time. An hour after supper was spent around the campfire in conferences, embracing various aspects of church and home life. A great deal of the material and information for the conferences, under the leadership of Rev. Mr. Alves, was taken from the book “Valiant Christians We.” – Adapted from “Alabama Spirit, ” Camp Beckwith archives

Monday, July 9
We left town at 5:12 a.m. with eight boys, luggage and about 500 bricks. Right at the edge of Mr. Johnson’s property, we stuck fast in an old stump hole, slipping and sliding down to the rear axle. We arrived at camp at 8:45, with a second load at a little after 6. Took a swim before hitting the hay.

Tuesday, July 10
Practically all the morning was spent fixing up the campsite and tents. That ole mail boat really travels; she has a new engine. Meals are somewhat different this year — real bread and an indoor table. Still, eating outside had its advantages. No apple butter this year. Went across the Bay in the new boat, the Nothis Ann. Am going to sleep tonight — maybe — if the skeeters take a vacation.

Wednesday, July 11
Walter took a crew out to cut trees and Mr. Barton one to repair the road. For dinner we had more potatoes. Every meal we have had, except breakfast, has been mostly potatoes. Immediately after dinner, we dressed for Fairhope. Counting all, we bought 17 pies and not half of them reached Camp. Forney kissed all the girls goodnight. Major unsuccessfully tried to snitch a pillow. Finally reached Camp. 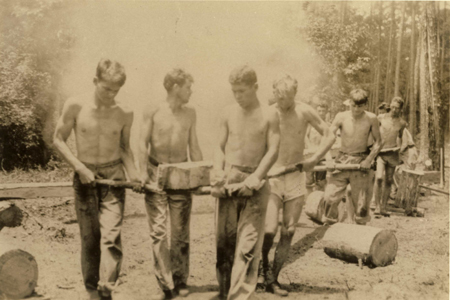 The Parson overslept this morning; we didn’t get up until 6:20. Finished cutting the trees today — 74 in all. No potatoes at dinner today. Believe it or not, I really found a piece of meat in the beans. Narrowly escaped being dumped into the Bay, when asleep on the beach this afternoon. The Parson and several others went to Turkey Branch. Watermelons — plenty of them — given by Mr. Bishop. Wyly and Octave are continually at each other’s throats. Mosquitoes are worse tonight.

Friday, July 13
Thousands of them swarmed from the skies seeking happy landings, and maybe they didn’t disturb our slumber. The entire camp was up by 4:30 a.m. It is the first time the mosquitoes have really bothered us. Wyly and Austin got the mules today — Jennie and Babe. Skinned logs all morning; received several letters today; snaked a few logs this afternoon. And, has Babe got a razorback? Rather not talk about it. Major and Arthur broke Hallock’s Bridge coming back from Atmore this evening.

Saturday, July 14
Slept under two mosquito nets last night. Had a good dinner today. Major and the Parson bid us adieu after dinner. It was a beautiful night. The crescent moon was low in the west, shining across the meadows and through the pines, which were swaying in the gentle breeze. And there were Austin and myself riding through the swamps on the mules.

Sunday, July 15
Slept much later this morning. Dinner was really a good meal. The meals have really been good lately. Fifteen of us spent the afternoon at Fairhope and saw several girlfriends while there. As usual, the Parson was late; we waited for him at Klumps exactly an hour and 45 minutes. Practically everyone is sleeping on the beach tonight. 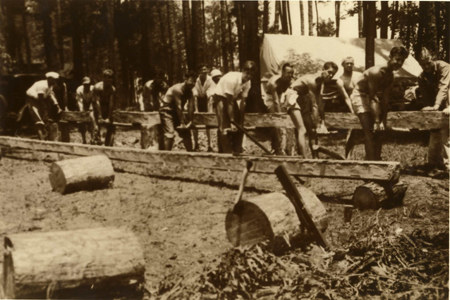 Monday, July 16
Eight days and not a drop of rain! They started the foundation of the cabin today. I was on K.P. and consequently didn’t do much. All of us went to the Gulf this afternoon – dressed in the bushes, dug for sand crabs, wrote all the gossip in the sands and stopped at Turkey Branch on the way home.

Tuesday, July 17
Had conference immediately after dinner since some of the boys wanted to go fishing tonight; it later developed that “some of the boys” were the Parson. Seven of us went to Fairhope.

Wednesday, July 18
The lumber from Turkey Branch arrived a little after 6 this morning. Had a swell flounder breakfast this morning provided by the Parson. Worked on Hallock’s Bridge.

Thursday, July 19
Major slept on the beach last night and woke to find himself in the water because the tide rose. Went to Turkey Branch at 4 this morning. Helped Mr. Hume survey and had visitors today from town.

Friday, July 20
Hauled lumber all day. After supper we had the motorboat. Rode all over the Bay and finally tied up at a channel stake and went swimming. Parson sat on us for keeping the boat so long.

Saturday, July 21 – Last day
Got up at 4 this morning — everyone did — in order to get an early start for home, but we didn’t finally leave until 3 p.m. Had a blowout on the Bay bridge. Finally reached home about 9:30 p.m. 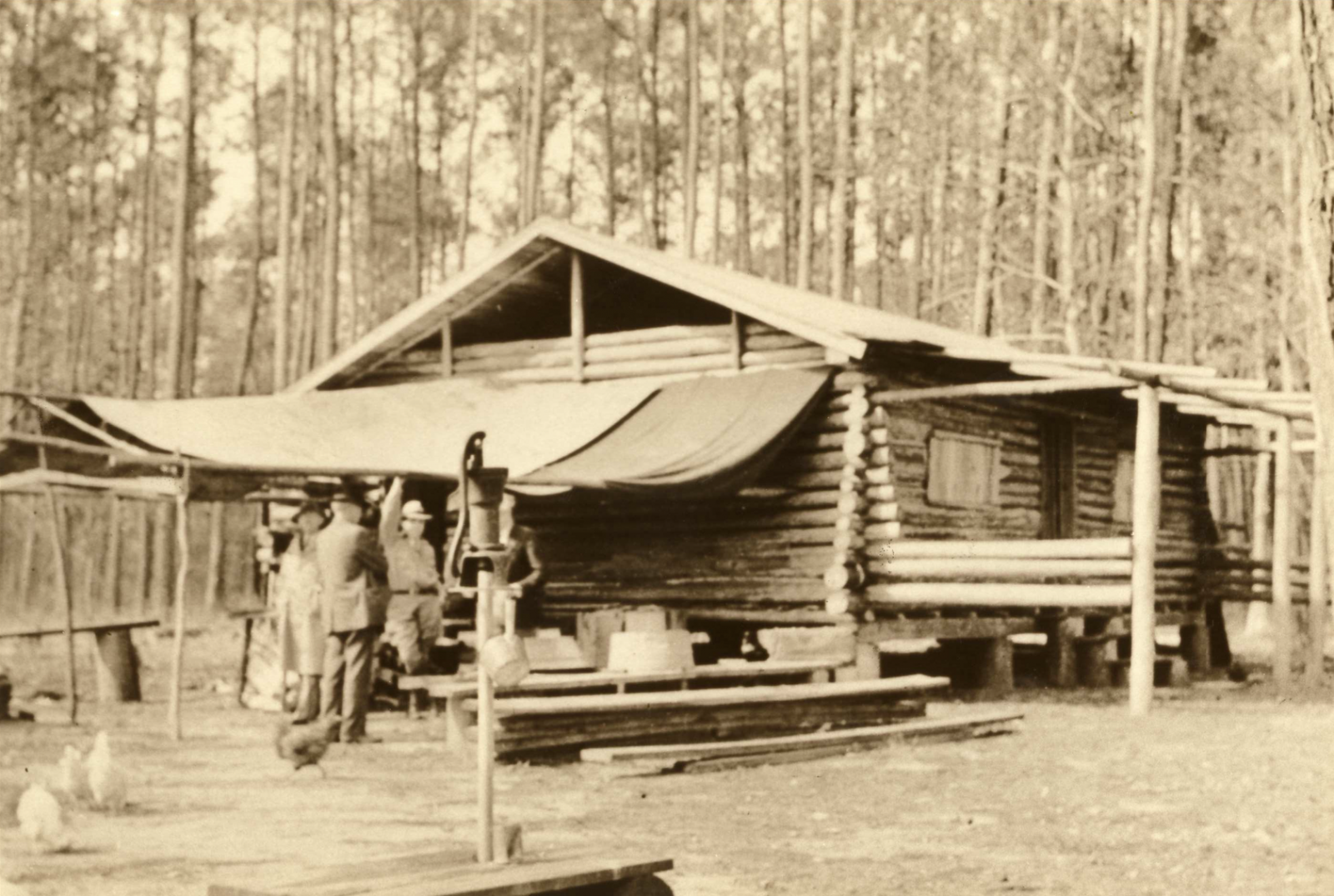 Letter from a Camp Steward

Well, the boys checked out yesterday at 2:45 p.m., all happy but reluctant to leave. And, after they left, I took inventory and lined off the ridge route into the property as the boys stuck hard in the palmetto bog. I did not have to cut any trees and shortened the route. It is all high and dry.

It was a real day of rest today, but I miss all of you and hope you and the rest of the crowd come over often. I have written the Bishop a letter asking his permission to stay on here as you asked me to. I saw a Mr. Dorgan, one of our neighbors, this morning, and he said we could have one of his cows in a fair day to milk so that will help. I hope Mr. Edward can get the Indians down to finish the cabin real soon. I want to get busy on a garden also. The well water is still good.

We like it fine here and really want to stay and hope you can come over real often. Will close with best wishes to you and yours.