I’m not sure what you expected to find if you recently pulled up your Kentucky bluegrass roots and moved to the Gulf Coast. But you can forget everything you knew about growing lawns deep in Michigan, Ohio, New England or Tennessee. You drove past the last strand of familiar ol’ Kentucky blue 400 miles ago, and you’ll never see another reel-cut Colonial bent-grass lawn for the rest of your Southern sojourn.

The land of Southern lawn grasses is a brave new world.

Don’t despair: When it comes to managing lawns, newcomers have some advantages. Many native Gulf Coast lawn owners know far less about their own grasses than they think they do. Trying to break them of their hard-headed habits proves a lot tougher than helping you newcomers start fresh, so there’s a good chance you’ll end up with the best-looking lawn in the neighborhood.

Let’s get started with the basics: The bluegrass lawn baggage you should leave behind when starting your new Gulf Coast lawn.

No Bluegrass, No Bent Grass, No Fescue, No Cool-season Grasses!

All Northern grasses are cool-season grasses – ones that need a cool rest period every evening and that grow best when night temperatures stay in the low 60s. None of these grasses stand a prayer during a long Gulf Coast summer.

Our grasses, by contrast, are all warm-season grasses and grow best when night temperatures remain in the 70s. Practically speaking, you have only two choices for lawn grass: St. Augustine or centipede. Some new (and quite expensive) zoysias are going through trials, but your choices are basically the two mentioned above.

That’s right: You cannot establish a permanent, attractive lawn in Mobile from seed. Period. All quality Southern lawns must be established from sod or by sprigging.

Many cool-season grasses are annuals, and of course, that means they have to be started over from seed every year. Even perennial versions of cool-season grasses – the ones that return year after year without reseeding – traditionally start out by seed.

There’s one overriding reason you never want to sow Southern grasses from seed: Unsightly and annoying seed heads all summer will just drive you insane.

So thank goodness most warm- season grasses are cloned from genetic freaks that, for one reason or another, rarely produce seed heads. Some varieties of centipede are available by seed, but I’ve never known anyone who had much success getting them established.

Starting from turf is more expensive than starting from seed, but it’s much quicker and much more reliable. Sprigging is a lot less expensive, but it requires more patience and vigilance than most lawn owners can give.

You’re used to cutting your bluegrass and bent-grass lawns down to an inch high. Get over it – and quickly. Healthy Southern lawns are thick and lush. St. Augustine, during summer, should be cut no lower than three inches high, and preferably closer to four inches high.

Now don’t get the impression that Southern lawns are shaggy. They’re just thick, thicker than a plush pile carpet. There are many advantages to that. You’ll have vigorous grass that more quickly repairs and hides minor damage, along with greatly increased resistance to pests, diseases and weeds. And the extra height of St. Augustine is one of the reasons it tolerates a little shade better than most grasses do.

No Rest for the Mower

Welcome to our nearly frost-free paradise, where the lawn gets little sleep and the roar of the lawnmower can be heard every month of the year.

In a normal year, from April through October, you may find yourself mowing every five to seven days just to keep up with the growth. And from November through March, you’d best count on cutting at least once or twice a month: Even if the grass slows down, the weeds won’t. The best way of managing spring weeds is occasional winter mowing.

Some gardeners here can’t seem to get enough of mowing, and in October end up oversowing their warm-season grasses with winter rye, an annual cool-season grass. As long as you don’t mind mowing, it’s not harmful to your warm-season grass. The annual grass will disappear when night temperatures climb in April, just in time for the warm-season grass to green up and start growing. 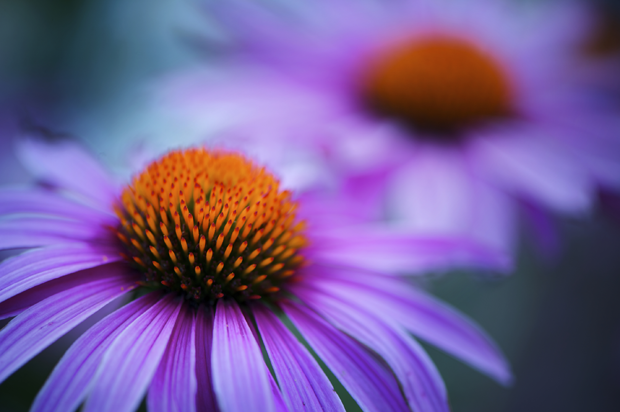 Bloom of the Month
Purple coneflowers and similar composite flowers – Mexican hat coneflowers, black-eyed Susans, sunflowers – love the heat and drought of May on the Gulf Coast. Some call them summer flowers, but for us, that means American summer, from mid-April through mid-June. They’ll bloom their best now, then quietly leave the stage to tropical flowers in late June and July.

Signs of the Season
It is now Huck Finn summer, the summer of Missouri and Michigan: Hot and green and more than a little dry. There’s no sign now of the bulbs of spring; in their place, long dormant gingers emerge. Hummers disappear to make their nests deep in the woods, but look closely for the first glimpse of the tanager.

Planting
You are planting for July. Don’t bother with any plant that can’t stand the hottest, wettest days of summer. Think hibiscus, mandevillas, allemandas and tropical salvias. Forget petunias, marigolds, sunflowers and other dry-weather crops.

Mowing
Most lawns tolerate low mowing in spring, and many benefit from it. But spring is long past. Raise your mower over the next few weeks, until it stands 2 1/2 to 3 inches tall for centipede and 3 1/2 to 4 1/2 inches high for St. Augustine. It will make a dramatic difference in the health of your lawn.