Searching by the Sea Shore

Growing up on Dog River with a fisherman and former biology teacher for a dad, I spent my summers learning how to bait a hook, cast a line, drive a boat and ski, even though I would have much rather been playing with my Barbies. Out of love for my dad, I tried to be a good sport. Alongside my pink ballet shoes and dress-up clothes were tackle boxes and fishing tournament trophies. Through the years, I mastered the skills and wore them with honor, like hard-earned Girl Scout badges. I became accustomed to the looks of shock on people’s faces when I confessed that I, a self-proclaimed girly girl, am truly a river girl at heart. But, aside from a 12th-grade marine biology experiment, there was one tried-and-true Bay tradition that I had yet to try — crabbing, or more specifically — soft-shelling. There are about a million things I would rather do than stand knee-deep in water in pitch-black dark to chase after soft-shells, along with eels and whatever else might be after them. But, I set out to prove to everyone, including myself, that I could do it.

Oprah once said that luck happens when preparation and opportunity meet. The same can be said for soft-shelling. So, my dad Steve, opposite, and I prep ourselves with a net, a floundering light, a bucket and most importantly, old tennis shoes, and head out a quarter after dark looking for opportunity. 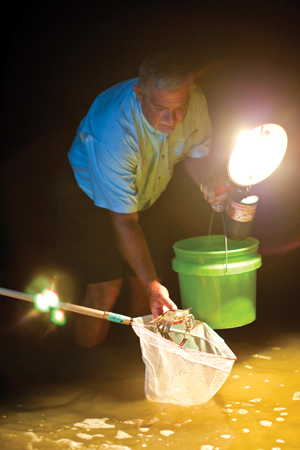 Crabs are only in their tender state for 72 hours, so you have to strike when the fates align and the conditions are right. With soft-shelling, there are several variables that determine your luck: the tide, the moon, the wind and the location. Soft-shelling is best during a full moon, about an hour before low tide, on a calm night on a sandy bottom. “The crabs come out of deep water, looking for something to hide under while they’re molting, ” my dad says. Grass, rocks or limbs act as their shields to hide them from predators.

Our first stop is the old Nan Seas on Dauphin Island Parkway. I hop out of the truck ready to get my feet wet, but the water is too muddy, so we head a little further down Dauphin Island Parkway to a friend’s bay house. Still no dice. Then, we venture on to Alabama Port in hopes that the third spot will be the charm. Here, the water is still a little murky, but it’s clear enough. Net in hand, I take a deep breath and creep into the lukewarm Bay waters. I keep close to my dad, who is holding the floundering light, so that I’m able to see the crabs — but mainly so I can keep an eye on all of the other critters swimming around me. The thought of walking around in eel territory still sends shivers up my spine! When we finally see our first tender crustacean, I gently scoop him up into my net with bursting pride. The good fortune continues, and my confidence grows. We eventually call it a night with a decent amount of decapods ready for the eating, and thankfully, no eel sightings.

If you aren’t blessed to have Bayfront property or know someone who does, here are a few Western Shore musts.

Old Nan Seas
Be careful. This DIP hotspot is full of big rocks and limbs — great for soft-shells, not for bare feet or flip-flops.

Alabama Port
Soft-shells frequent this other DIP location, especially near the piers and pilings.

Coden Beach
This is one of the more easily accessible sandy bottom spots to catch crabs.

Port of Pines
A grassy habitat and clear water makes this one of my dad’s favorite places to soft-shell.

Soft-Shell Farms
If you don’t have luck catching them on your own, you can always buy them.

How to Shell a Soft-Shell

Hands down, the best part about soft-shelling is the meal that comes afterward. When we return from our excursion, my dad and I prep our catch for spider sandwiches for the next day. When cooking soft-shells, some people leave their exoskeletons on, but not us. To de-shell a soft-shell, first, if it’s a female, remove the abdomen flap, or apron (this is where their eggs are carried). Male or female, then slowly ease off one corner of the shell at a time. Scrape off the “dead man’s fingers, ” or gills. Then, do the same to the other corner, and don’t forget to remove the intestines. For the Boykin family’s spider sandwich recipe, see right. 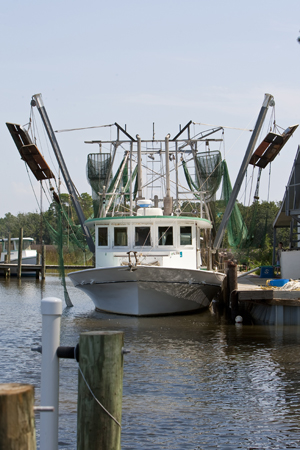 After our big adventure, Dad and I tote our catch home to make a mouthwatering meal with Mom.

1. Clean and peel soft-shells. Set aside.
2. Heat oil to 360 degrees in an iron skillet on the stovetop.
3. In a bowl, mix eggs, salt and pepper, milk and Tabasco.
4. In a separate bowl, combine flour, corn meal and Lawry’s Seasoning Salt.
5. Dredge crabs in egg mixture.
6. Toss crabs in flour mixture. Coat both sides well.
7. Fry in oil for 5 – 10 minutes until well browned. Drain on paper.
8. Serve on toasted bread with desired sandwich toppings. Makes 3 – 4 sandwiches depending on the size of the soft-shells.

Blue crabs are just as tasty in the hard-shell form. Older crabs’ exteriors last for about 30 to 50 days until molting starts. Since they aren’t as vulnerable to predators during this phase, they don’t go into hiding, which makes them a little bit easier to catch. Some people lure them in using traps or baskets baited with chicken or pogies; others tie bait onto a rope and slowly pull it up when there’s a bite.

Tucked away off a back road on Fowl River near Dauphin Island, Zirlott’s Gulf Products has the science of crabbing down to an art. Victor Zirlott, wife Patricia and their children have been selling some of the cleanest picked crabmeat for more than 20 years. As I pull into the drive, I’m right on time. The boat has just come back loaded with crabs — and children. The Zirlotts were practically born with their sea legs. “Mama would send a diaper and a bottle with us on the boat, ” daughter Becky Cornelius says. The family sets out anywhere from 200 to 500 traps full of pogies every day, she says. At daylight, her brother-in-law Jeromy Brinkman heads out on the boat, setting out and checking traps until sometimes 2 or 3 p.m. Along with the crabs, the crew often brings back flounder and other sea creatures. The unexpected catch of today is a stingray.

After the traps are set, Becky says it only takes about 24 hours for them to fill up. Crabs are boiled for roughly 15 minutes; then their backs are popped off, their claws and legs are

snapped off (and reserved for their meat), and their intestines and gills are removed. Overnight cooling makes the meat firm and easier to harvest the next day. Family matriarch Patricia and five other women pick up to 900 pounds of the crabmeat in 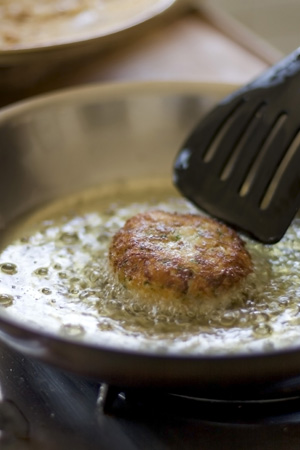 a day. Culling crabmeat is in Patricia’s blood. She’s been doing it off and on for 45 years. Her mother, grandmother and other female relatives taught her everything she knows. She says there’s no secret to perfect, shell-less crabmeat, except for “experience, experience, experience.”