Although our founding fathers were French, the Bay area boasts a rich Celtic culture dating back hundreds of years. While it wasn’t always celebrated, the Bay area never lost its Scotch-Irish roots, and many of the traditions of those cultures linger here today. Neighborhood eateries, such as Lucky’s Irish Pub and Grill, on Airport Boulevard, serve up authentic feasts, like corned beef and cabbage with frothy and potent Irish coffee beignets for dessert. Not to mention the stellar local St. Patty’s Day soirees around town. We have the Irish Potato Famine to thank for that.

Many locals’ ancestors were Scottish and Irish immigrants who set sail for “greener pastures” in America to escape poverty, mass starvation and religious persecution. Like New Orleans or Charleston, Mobile, a popular port of entry, was a natural spot for these newcomers to put down roots. Some of these original Scottish and Irish immigrants served in the Civil War, and the Battle of Mobile Bay still holds the record for most Medal of Honor awards given to Irishmen for a single action. Scottish-born Kate Cumming moved to the Port City years before she became a celebrated Confederate nurse while most women were barred from hospital work. After the war, Kate returned here and published her wartime diary “A Journal of Hospital Life in the Confederate Army of Tennessee.” 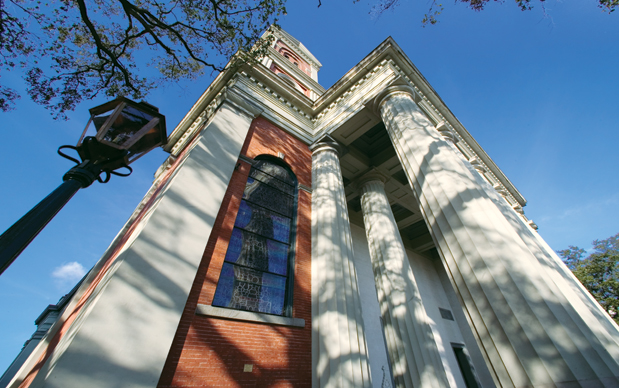 Irish-born Bishop John Quinlan spearheaded the building of the portico of the Cathedral Basilica of the Immaculate Conception.

As many Irish settled here in their search for religious freedom, Mobile became home to one of the highest concentrations of Catholics in the U.S. During the post-Civil War era, Irish immigrant priest Father Abram Bryan, known as the “Poet of the Confederacy, ” ministered to Mobilians and penned many of his famous Confederate-inspired poems. Although founded by French Jesuits in 1830, Spring Hill College, the first Catholic college in the South, has a longstanding history of Irish presidents and current leader, President Father Gregory Lucey, S.J., is of Irish descent. In 1859 antebellum Mobile, Irish-born John Quinlan was named the second Bishop of Mobile. Ten years later, when the college burned during Reconstruction, he spearheaded efforts to rebuild. He also founded St. Patrick’s and St. Mary’s churches and built the portico of the Cathedral Basilica of the Immaculate Conception. After a succession of Irish bishops, a first generation Irish American became the sixth Bishop of the Diocese of Mobile: Bishop Thomas Toolen. He went on to found Bishop Toolen High School which would evolve into what is now McGill-Toolen Catholic High School.

Given the richness of Catholic schools, churches and its accessibility as a port city, it’s no wonder that by 1900, Mobile had the largest concentration of Irish immigrants in Alabama. The legacy prevails. According to filmmaker Cee Cee Redmond, Country Club Estates is still one of the largest neighborhood concentrations of Scotch-Irish descent in the country. After noticing a strong presence across the Gulf Coast, Redmond set out to create her first documentary on the subject. Formerly a Mobile Press-Register photojournalist, she began research after returning from a trip to Ireland. “I felt very at home there, ” she explains. Then she realized that although there had been documentaries on Irish descendants in Appalachia, Chicago and across the Eastern seaboard, there were no depictions of the Gulf Coast’s own Celtic roots. “Were they here? Yes. Did anyone ever say that? No.” Redmond hopes her upcoming film, “Gulf Coast Irish Fusion: Food, Music, Traditions and Culture, ” set to release in March 2016, will show Southerners with Celtic heritage that they’re not alone. “They think it’s a small number, but it’s really not.” 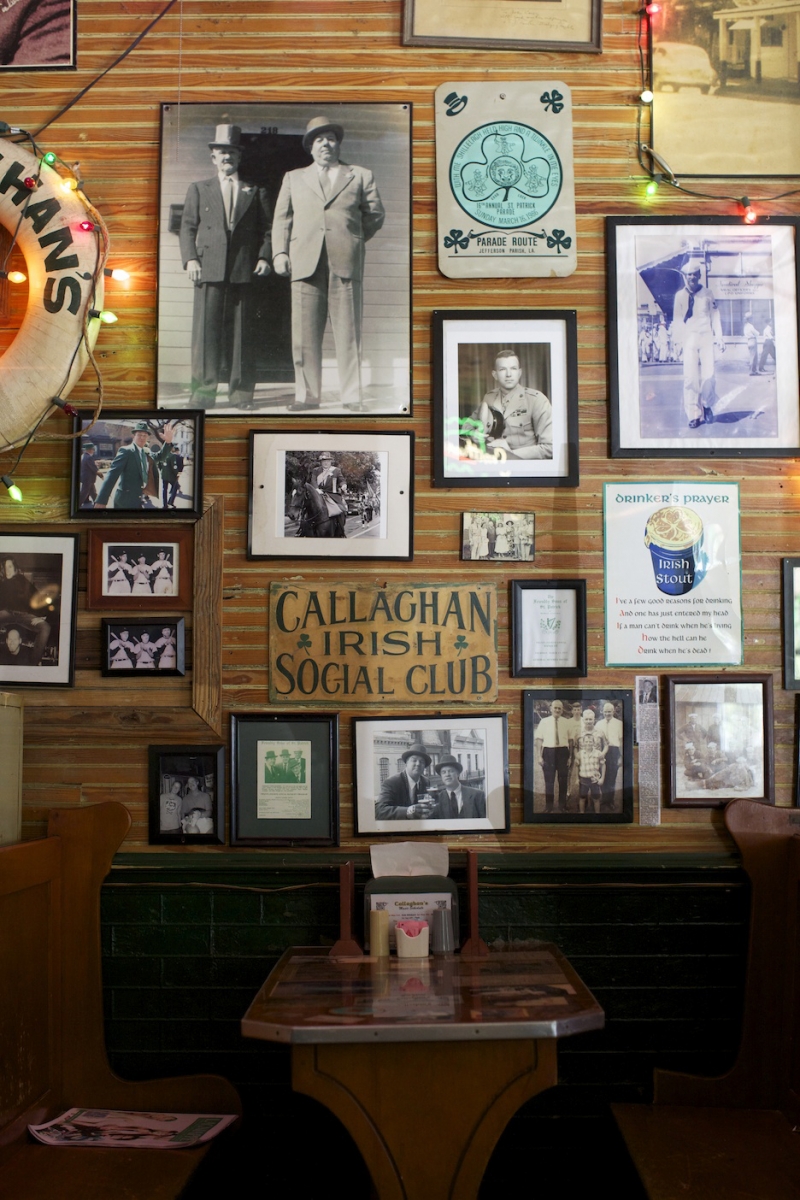 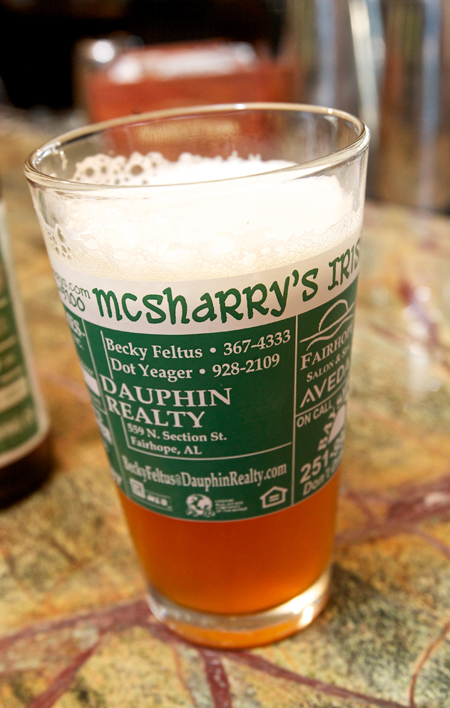 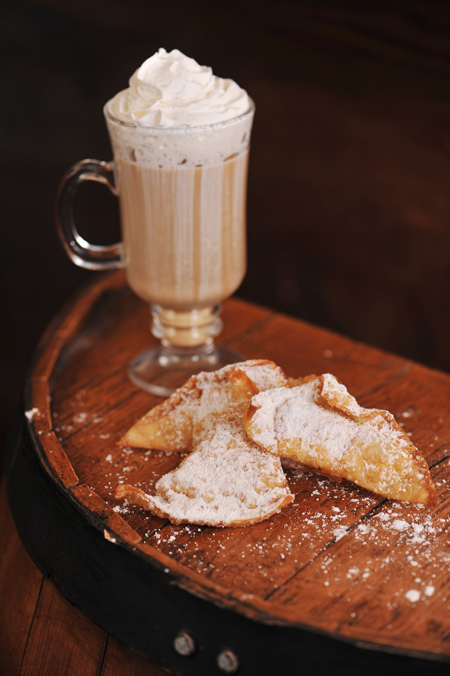 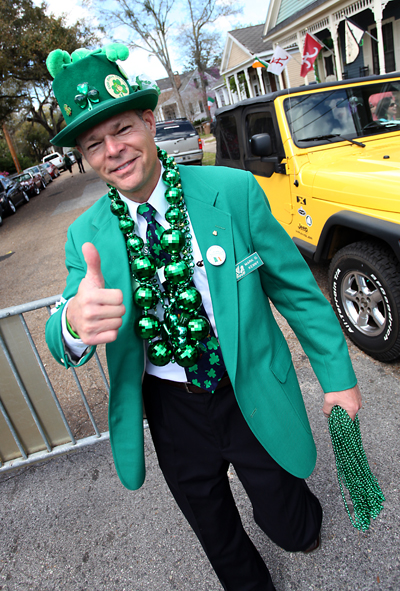 ABOVE RIGHT The Friendly Sons of St. Patrick welcome thousands to their parade. The streets become a virtual Emerald City as jolly parading members, including Mark O. Kenny, assemble to celebrate. Photo by Lyle Ratliff

Redmond isn’t the only Mobilian chasing down her roots. Groups such as the Friendly Sons of St. Patrick and the Scottish Society of Mobile seek to celebrate their own ancestry. “It’s in the blood, ” former Scottish Society president Randy Seale says. Most of the organization’s members can trace their bloodlines back to Scotland, although you don’t have to boast Scottish lineage to be a part. The society hosts events including regular Scotch tastings, such as Scotchtoberfest, a blind taste test held every October and a Robert Burns dinner to honor the nation’s most famous poet.

Albert Hunter, another former president, says he was once the “one-man Burns dinner.” “I would make the haggis. I would play the bagpipe in, bless the haggis and pipe myself out.” That’s because Hunter was at one time the only bagpiper in Mobile and Baldwin counties. “Once you start playing, no one else forgets it.” he says. He was inspired by a miniature bagpipe his great-aunt brought back from Scotland. The bagpipe is passed down from generation to generation, and he decided to learn how to play the instrument after he inherited it.

The Friendly Sons of St. Patrick also celebrate their heritage during the annual St. Patrick’s Day parade. The group has been around for decades, and the parade draws in crowds to Downtown no matter what day of the week March 17 falls on. Louis Snow has been a member for 35 years. He is also one of the few members who is allowed to don leprechaun garb for the festivities. These leprechauns don’t just participate in the parade, they also appear in costume throughout the year to entertain young patients at hospitals and children’s homes with their Irish dances and songs.

John Thompson is another member of the Friendly Sons of St. Patrick, although hosting his own green beer shindigs keeps him from marching in the parade. As co-owner of Callaghan’s Irish Social Club, Thompson has his hands full throwing their annual St. Patty’s Day block party. According to Thompson, it became too large an affair in the 1970s and was canceled until he and his partner decided to revive the event after they took over the pub. Thompson claims Irish descent, and his father and uncle were charter members of the Friendly Sons. “If you go to a pub in Ireland, the entire family is there, ” he says. “Here at Callaghan’s you see every generation, and every single one of them fits in.” 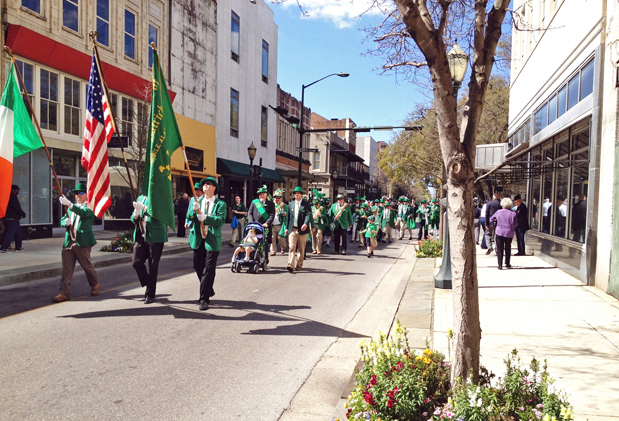 Photo courtesy of the Friendly Sons of St. Patrick

Kevin Duggan moved to Daphne a year and a half ago after marrying a Daphne native. “The South is the same as Ireland really, ” he says. “There are just more pubs and churches in Ireland.” Duggan splits his time between serving at Callaghan’s, McSharry’s Irish Pub in Fairhope, and Cosmo’s Restaurant in Orange Beach. Although born in New York City, he moved as a child back to his father’s home in Kilkenny, Ireland, after his mother died. Duggan later decided to leave Ireland for Los Angeles where he met his wife who would later lead him to Alabama. He says there are few differences between Ireland and Alabama — other than the hot weather. “It’s very green and laid-back here. The people are friendly.”

McSharry’s Irish Pub owner Ronan McSharry moved to Fairhope eight years ago after a group of his friends talked him into opening an Irish pub in Lower Alabama. While his original plans were to open a pub in New York City, he found the Big Apple too busy for his taste. “Everybody down here was so excited when McSharry’s opened, because it was authentic.” The pub now boasts the longest running Irish music session along the Gulf Coast. “The session now plays a McSharry’s song, ” he says. “It’s as Irish a bar as  you’ll get in Ireland.” Other than adjusting to the hot weather and presence of   snakes (St. Patrick chased the snakes from Ireland, you know), McSharry says adjusting to life here was easy. Living close to the water also reminds him of his home in Sligo, Ireland. “In Ireland, we all watch the sunset together. I’m 5, 000 miles away, and we’re doing the same thing. You’re still seeing the sun set in the West.”

Originally from Cork, Ireland, Ann Wall and her family moved to Daphne to escape the snow and ice. They arrived on Christmas Eve in 1989 only to find Mobile Bay frozen over. Ann’s husband, London native Jim Wall, was offered a job at the University of South Alabama, and she took a job teaching at Christ the King and later McGill-Toolen, “It took me a while to get used to ‘Yes, ma’am, ’” she says. While Ann visits Ireland frequently, she now considers Alabama home. “The Irish are noted for their hospitality and will give you a hundred thousand welcomes (cead mile failte). The same is true of Alabamians.”

Sounds of the Mother Land

When Tom Morley, right, and Andra Bohnet started the Celtic music group Mithril, they discovered they were filling a huge hole in the Mobile music scene. “Our very first concert was a complete sell out, ” Morley says. “We  had to turn people away. It was an instant success.”

Both members of the Mobile Symphony, Morley and Bohnet first collaborated on the Silverwood Quartet, which played mostly classical music. Then, an Episcopal minister introduced Tom to the world of Irish fiddling. Morley, a violinist, and Bohnet, a flute player, immediately became excited. The main two instruments of Celtic music are the flute and fiddle. While it took several tries to create a Celtic group, they finally found Ben Harper to play the guitar and David Keaton to play percussion. Since then, Mithril has toured throughout the country. “We always tell our audience we’re the best Irish band in South Alabama, ” Morley says. “That always gets a laugh.”

A few years later, Morley decided to start a traditional Irish music session for Irish musicians in the area. After McSharry’s Irish Pub opened just a couple years later, the group moved their jam session there. Now, you can find Irish musicians playing to a packed crowd on Sunday nights. “It’s the best kept secret in Fairhope, ” Morley says.

The sessions eventually attracted Dublin Down, an Irish pub band from Raleigh. The trio moved to Gulf Shores and were amazed to discover something like this was happening in Fairhope. “We fell in love with McSharry’s, ” Dublin Down frontman Larry McMeekin says. “It was a delight to find.” He says he hopes to make more people aware of Irish music in this area. “Everybody loves Irish music.”