Dauphin Island is a land of piney woods, saltwater waves, a Civil War fort and zero Burger Kings. Here, there are no high-rise condos. In fact, it doesn’t even have a skyline. Current zoning will not allow any structure more than 75 feet tall. People come to Dauphin Island simply to chill out where the chill factor is as bright as its sugar beaches.

“The uniqueness of our island, ” says Mayor Jeff Collier, “is that folks come for what we don’t have. We’re not overrun with people; you can claim a spot on the beach. There’s no heavy traffic.” You’ll spend more time trying to find a traffic light than stopping for one.

“In some degree, urban development and growth left us behind. But, in return, there’s a charm and character people yearn for.”

About 1, 300 people call themselves “islanders.” But, taking a census here is like herding its pelicans. Some days the population triples, as vacationers from all over the U.S. travel across the Dauphin Island Bridge.

They come, of course, for wave-splashed beaches and great fishing. Dauphin Island also boasts Confederate stronghold Fort Gaines, with spectacular views of the Gulf of Mexico and Mobile Bay. Completed in 1862, the American citadel, named for War of 1812 hero Gen. Edmund Pendleton Gaines, soon became home to Confederate troops. In August 1864, the Southerners and their compatriots at Fort Morgan, fought a Union fleet in the famous Battle of Mobile Bay. Today, massive cannons aim outward at the Gulf — just as soldiers saw it. Intricate brickwork fortifies the structure — just as soldiers saw it. A gift shop is near the entrance — just as soldiers … OK, two out of three. 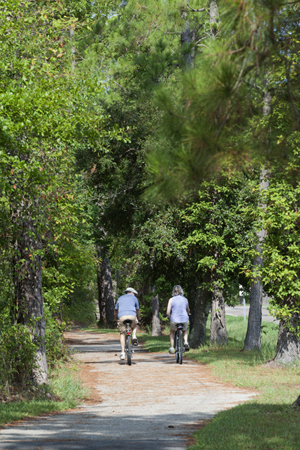 Around the corner, find the Dauphin Island Sea Lab Estuarium. The coastal waters resource center is a test because only true Dauphin Islanders can pronounce and spell “estuarium.” The public aquarium focuses on the Mobile-Tensaw Estuary System. It does not allow flash photography of an octopus, which probably isn’t a game-changer; just a forewarning.

But, these shores do have a game-changer — a new type of beachcomber, the art patron. “Everybody expects great art communities in Fairhope or Mobile, ” says Dena McKee, watercolorist and chairperson for D.I.’s St. Francis Arts and Crafts Festival. “Nobody realizes we have fine artists too. Our artistic community is the best kept secret on Dauphin Island, and we don’t want that to be a secret anymore.”

The third Saturday in April art event and annual church fundraiser for St. Francis Episcopal Church hosts painters, sculptors and craftspeople from all parts of the South. This year’s show featured 62 artists. “We turned exhibitors away because of no more room, ” McKee notes. “It’s that popular.”

Resident and executive director of the West Bay and Gulf Coast Tourism Development Council, Kathryn Carver agrees. “There are more than a dozen professional artists on the island. Our community wants to showcase these and draw others.” Other art shows slated for 2011 include the Dauphin Island Art Trail on Oct. 15, as well as the juried Holiday Art Fest on Nov. 19.

In addition to art lovers, the island also attracts 300-plus species of birds — and a flock of feathered-friend fanatics like Dena McKee and husband Don. “Dauphin Island is one of the top 10 birding destinations in the U.S., ” Don says, as he and Dena guide me through Cadillac Square. And with that, his cell phone rings with another birder reporting. Don has to fly the coop, before the birds do.

“It’s like that a lot, ” Dena says with a smile. “Recently, a rare painted redstart, native to Arizona, was spotted in our woods. I was managing the art show at St. Francis Episcopal Church when someone ran in shouting, ‘There’s a painted redstart on the island!’” Everyone burst out of the show in search of an Arizonian winged wonder. Art took a backseat to feathers that day, but Dena doesn’t mind. After all, this is island life. It is a small, close-knit town, for man and fowl. “We ride bikes, walk trails and feel safe, ” Dena adds. “It’s a place of community spirit, beaches and art festivals” — occasionally interrupted by an Arizona bird.

In April 2010, the good life was seriously interrupted. The land that defied Union troops, hurricane winds, and urban sprawl, faced a new threat on its shores: oil. Or did it?

“We had more damage from the news media than the BP spill, ” says Mary Scarcliff, owner of The Lighthouse Bakery. Tourists from around the world were led to believe Dauphin Island was doomed. It never happened.

“Yes, we encountered some oil sheen and tar balls, ” Mayor Collier notes. “But it was nothing like the way it was presented. Unfortunately, our potential visitors only saw what the press showed them.”

“It hurt us, ” Scarcliff says, pouring eggs on a griddle at her restaurant. “But, that was last year.” Now, locals and visitors alike congregate at the Lighthouse Bakery. Muffins, pastries, fresh coffee and breakfast aromas fill the island air. Try the egg, cheese and ham omelet on a crescent roll. My only complaint: It isn’t found on the mainland. 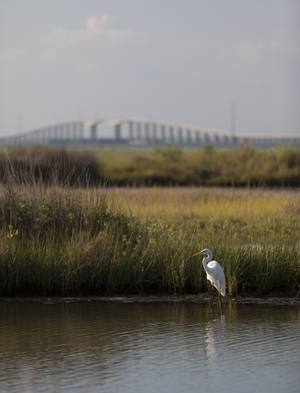 In 14 years of running the bakery, Scarcliff has seen change on Dauphin Island. “It’s grown from a quiet town to a thriving community, ” she notes. “But we stay family-oriented and respect where we are. My place and most other businesses blend with the island, without trying to overtake it.”

Like the Alabama beaches of old, Dauphin Island is still a good place to “twist again like we did last summer.” Just ask Chubby Checker. He visited last June, kicking off summer’s Dauphin Island Beach Party. The Food Network’s Alton Brown found the island in good taste, too. Or, maybe its treasures taste good. “I came down because I wanted to convince others that American seafood is back, ” he said at D.I.’s Gumbo Cook-Off last March. How can you convince others our seafood is good? “Simple, ” he said, “you feed it to them.”

Inevitably, people will always compare Dauphin Island to Gulf Shores. Both have Civil War forts, and … that’s about it. “They attract a different clientele than we do, ” Mayor Collier says, referring to the neighbor across the water. “We aren’t in competition with them.” There are not loads of college spring breakers here or big beach party concerts. Not that there’s anything wrong with that scene; it’s just not the island’s scene.

It is good when residents, visitors and nature live in harmony. It is good to chill out. And Dauphin Island chills well.

Dauphin Island, founded by French explorers in 1707, is named for the heir to the French throne.

In the early 1700s, Dauphin Island was the capital of the Louisiana Territory.

General Gaines, a hero in the War of 1812, died before the fort named to honor him was completed. He is buried at Church Street Cemetery in Mobile.

Although famous for its part in the Civil War, Fort Gaines also had a role in World War I (as a coastal artillery unit garrison) and World War II (as an U.S. Coast Guard station).