Pride of the Anglers

Just like dad “Big Greg, ” the Zieman kids have grown up spending their summers in Point Clear, moving down in May and heading back to Mobile in September. And their wharf – somehow both spacious and cozy – is the perfect place for the family to dock. The space is an angler’s paradise, from its elaborate boat launch to a small catch cleaning area; unsurprising, considering all eight Ziemans (Greg, Debbie and their six kids, ages 17 – 26) are avid fishers.

Built 20 years ago, the wharf features prominently in the family’s memories of summers gone by. “The kids would spend all their time swimming, staying out there until absolute dark, ” Debbie says. “They’d have what we called ‘bay beard’ – their little facial hairs would be covered in mud.” Stories of childhood hijinks abound, such as when bikes were ridden right off the deck and into the water, or when Lizzie, now 17, accidentally walked straight off the wharf while distractedly playing her Gameboy.

Today, the family continues to use the wharf for relaxed get-togethers, whether that’s enjoying a “fry fest” or shooting fireworks off the top deck. This year, oldest son, Greg Jr., had his wedding send-off along its boardwalk, running with his bride through a tunnel of sparklers, finally speeding away on a boat as husband and wife. Although the children are practically grown and have begun to start families of their own, they all seem to find their way back to that wharf on Point Clear, where they fished and swam so many summers away.

ABOVE AND BELOW LEFT Even the angle of the wharf is designed for fishing: it’s cocked specifically so that after a long day of angling, docking boats can drive directly into the afternoon’s southwest winds. 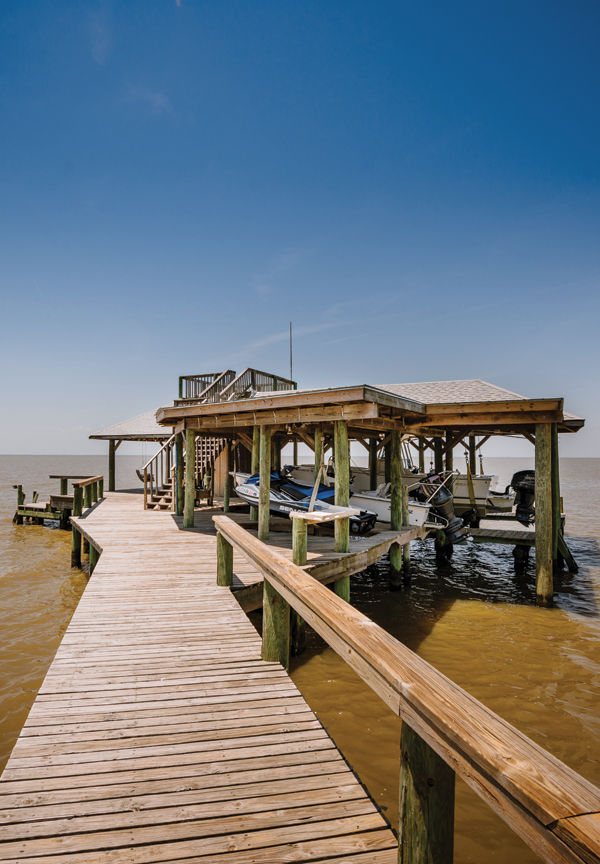 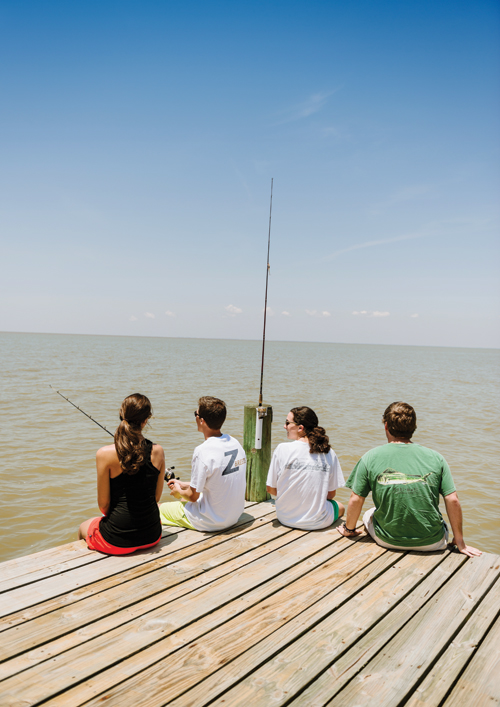 ABOVE RIGHT AND BELOW Zieman siblings Daniel, 20, and Lizzie, 17, ”bring their friends over and hang out in the sun for hours, ” Debbie says. 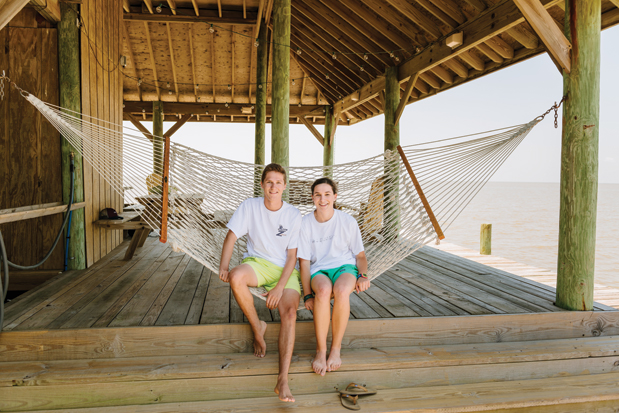 ABOVE Daniel and Lizzie Zieman

There is no better place to explore your inner child than the Stephens family’s wharf on Soldiers Creek. Always a work in progress, the outdoor space boasts a zip line, waterslide, two rope swings, a floating dock, corn hole, a tree swing, huge sundeck and plenty more. “I love projects, ” mom Greer says. “I’m always building or tearing something up.”

Their wharf – more like a creek-side water park – was so important to Greer and her husband, Harbour, that they had it built in 2001, the year before they built the house itself. “When the kids were little, they used to crawl up in the rafters and draw on everything with chalk, ” she says. “It was like Swiss Family Robinson.” Once those children (Harbour Jr. 19, and twins Nene and Jane, 22) grew up and left for the University of Alabama, they started bringing college friends from out of town for a visit. “There’s no division between the grownups and kids, ” Greer says. “I just try to keep everybody out on the wharf. There were 12 boys out here last weekend, and they never left!” Though the space, nicknamed “Camp Greer, ” has a very youthful air, it’s just as fun for adults, who tend to come by boat and stay for days at a time. So many boats, in fact, that they had to install extra slips to accommodate all of their visitors.

Despite being slightly annoyed by gawkers who drive by just to see their legendary funfair, the Stephens clan is still brainstorming how they can make their aquatic playground even more epic. “We want a blob now!” Greer says. 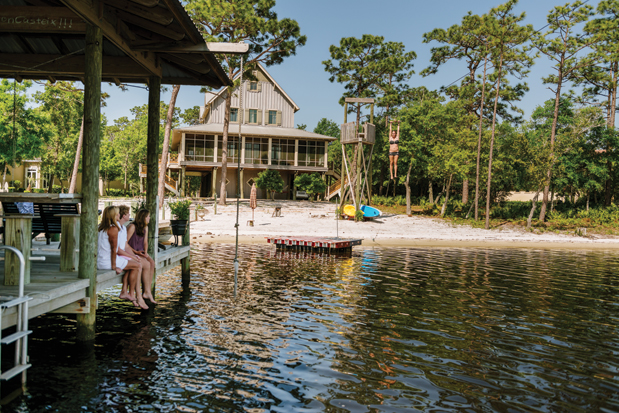 ABOVE A drop into the water from the zip line is a fun way to cool off on a blistering July day. 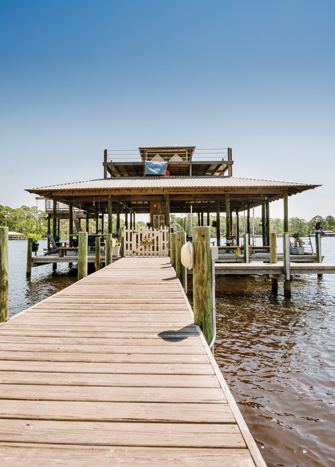 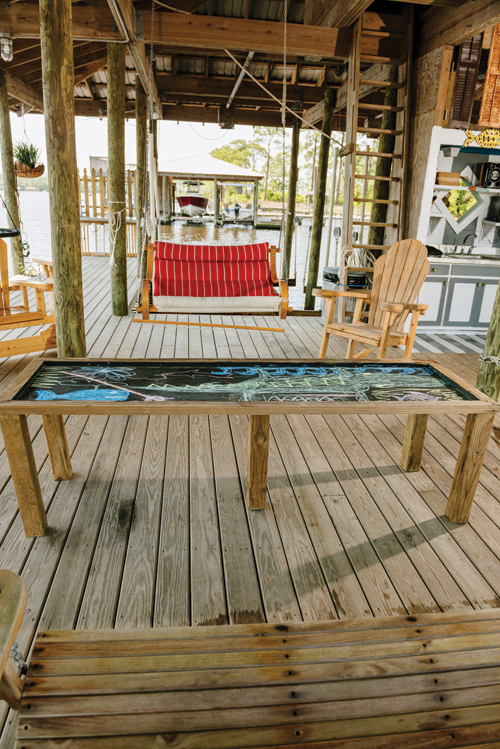 ABOVE A spacious deck sits atop the already elaborate wharf, featuring lots of patio chairs, perfect for lounging in the sun. 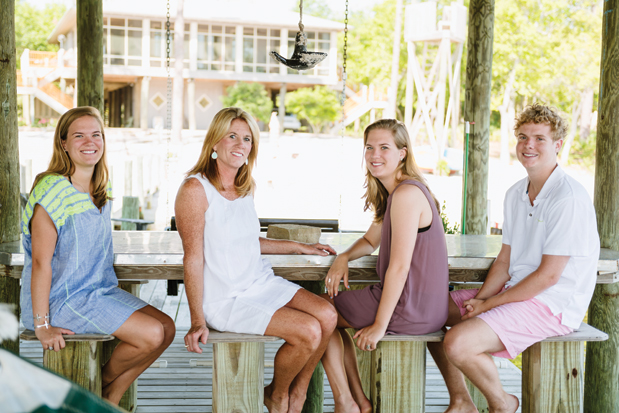 ABOVE “This bar is my favorite, ” Greer says,   pictured with Nene, Jane and Harbour Jr. “The stools are so high, you can put food up there and dogs and kids can’t reach.”

A Place for Porch Sittin’

Steve Haidt doesn’t hesitate for a second when asked why he and his family moved to Rabbit Creek, a charming enclave of Dog River. “Water, ” he says. “Life out here reminds me of the days when people sat on their porches and stopped to say hello.” Their riverside setup does indeed evoke the good old days of true Southern hospitality, but out here you won’t find much front porch sittin’. Instead, the Haidts spend hours on their wharf, visiting with friends who drive by on boats. “I call them my river rat friends, ” Steve’s wife, Linda, laughs.

River rats aside, there’s plenty for just Steve and Linda to enjoy on their wharf and adjoining patio, complete with a kitchen, television and plenty of comfortable seating. It’s like having a living room and full kitchen smack dab on the water. The couple cherishes moments in this space with sons Matthew, 24, and Daniel, 21, as well as their yellow lab, Hank. Evenings are spent out on the wharf watching the news, grilling out and lazing around before dinner.

“Manatees swim right by here. And sometimes in the morning, the water is so flat, it’s almost glassy, ” Linda says. “Facing east means we get some fine sunrises and moonrises, ” Steve adds. Whether they’re enjoying these quiet moments alone or letting loose with friends, the Haidts have a front row seat to everything that waterfront living has to offer: a vibrant community of friendly neighbors amid the stunning backdrop of our coast’s natural beauty. 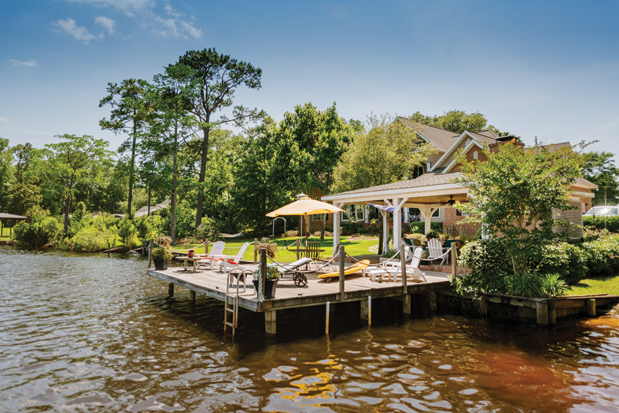 ABOVE “We like Rabbit Creek because it’s more narrow than other parts of the river, ” Linda says. “There’s less traffic and it’s not as windy.” 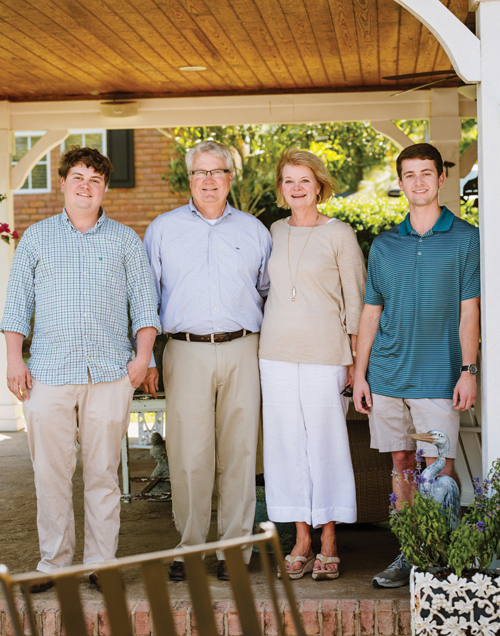 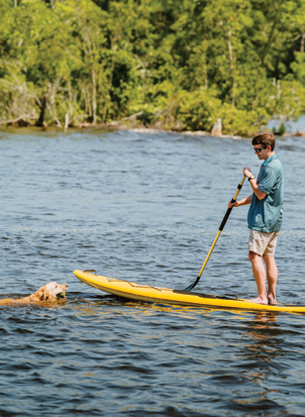 ABOVE LEFT The wharf encourages plenty of quality family time for (left to right) Daniel, Steve, Linda and Matthew.

ABOVE RIGHT Matthew paddle boards around his furry pal, Hank, who Linda says “swims just about every day.” 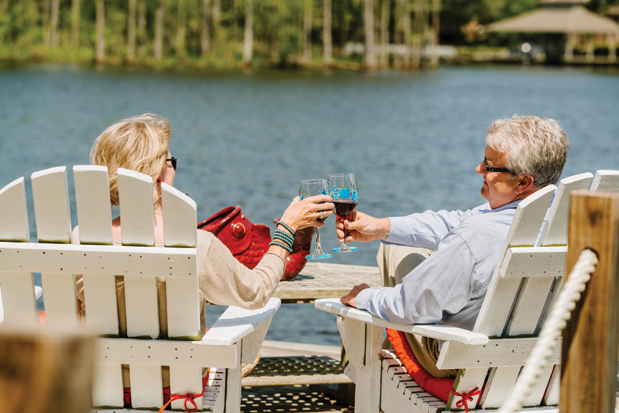