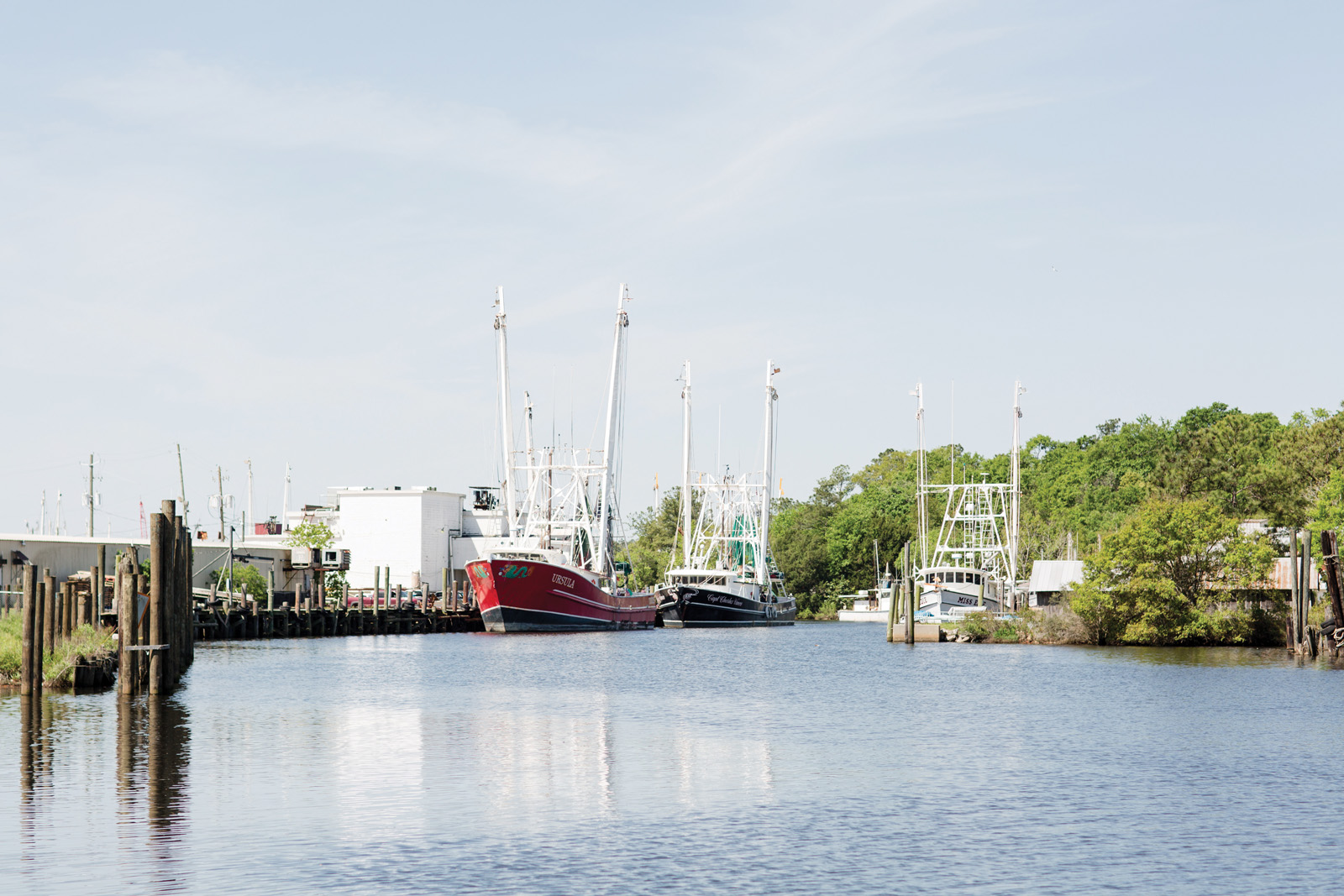 ABOVE The fleet docks along the Bayou, an ever-present reminder of the industry that dominates the town.

“Few among the thousands who pass annually along the principal highways of the southernmost part of Alabama turn aside from main-traveled roads to visit or stop in Bayou La Batre. These few are fortunate, for they discover a region outstanding in the charm of pines and moss-filled oaks scattered along bay shores and bayou waters.” – Mobile Archbishop Oscar Lipscomb

Mobile Archbishop Oscar Lipscomb wrote that 52 years ago. It was true then. It is true now. Fast-forward to May 2018, when another archbishop visits Bayou La Batre for the 69th-annual Blessing of the Fleet. He tosses a memorial wreath into the bayou, sprinkles holy water and blesses participating watercraft. Five thousand people witness a spectacle with no match in a town like no other.

On the south side of the J.A. Wintzell Memorial Bridge lies a city of boats. About 2, 500 people live and work there, with an emphasis on work. But theirs is a labor of love where water is held in reverence.

At the head of the bridge, on the right, St. Margaret’s Catholic Church and a statue of Christ with outstretched arms face the bayou. “He is a reminder for fishing crews, ” says parish pastor Rev. Bieu Nguyen. “They pass the statue when leaving Bayou La Batre and returning.”

The bayou is a blessing for the town known as “The Seafood Capital of Alabama.” The name is well-earned. In 2016, over 22 million pounds of Gulf and Bay bounty were brought into the town, netting $45 million. 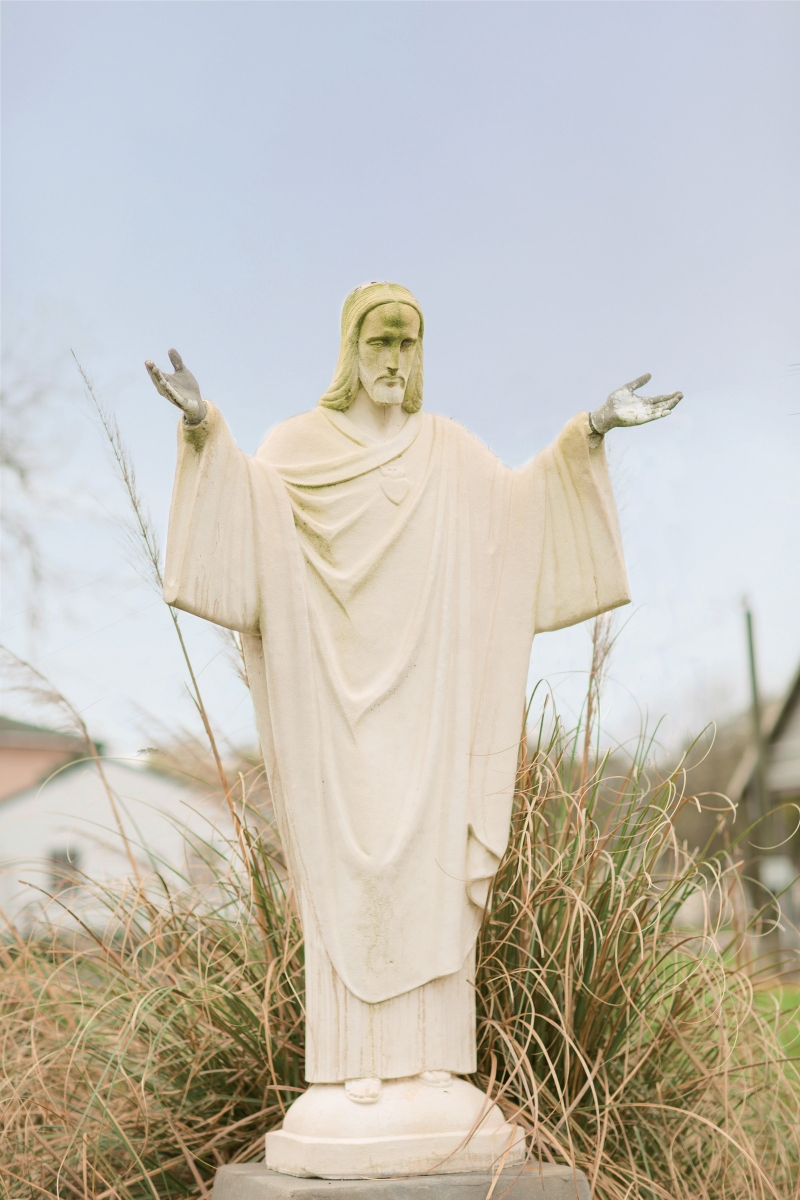 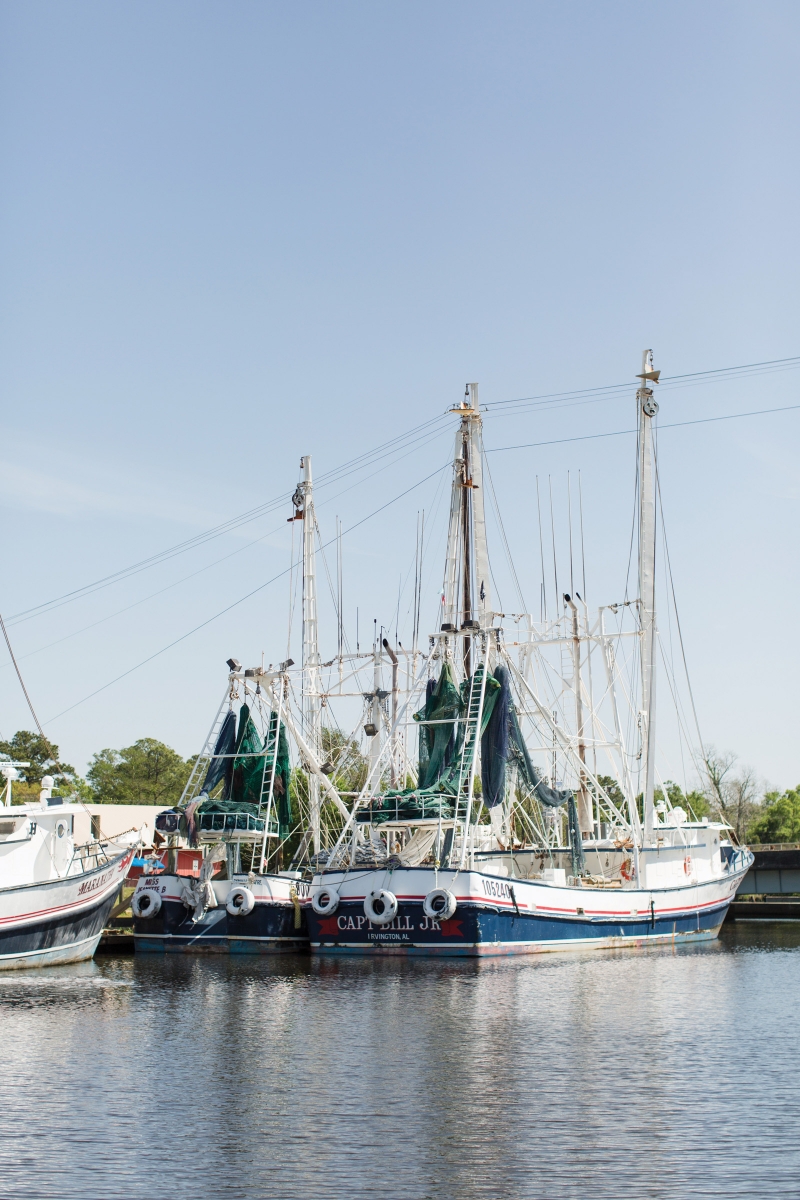 “We are a working community, ” Mayor Terry Downey says about the residential roll-up-your-sleeves and let’s-get-at-it work ethic. “We build boats, catch fish, process seafood, freeze it, sell it and just about everything else associated with it.”

At a right turn just past St. Margaret’s Church is the Shell Belt. Rows of shrimp processing centers, crab distributors, oyster shops and crustacean shells piled rooftop-high line the street. Tied to docks are no-nonsense working boats of all kinds, from small vessels that could be towed by car to 90-foot, $2 million crafts your car could park on.

An inner community is here, too, with commercial fishermen who cast their nets at the crack of dawn, all night and most hours in between. As Ernie Anderson, owner of Graham Shrimp Company and president of the Organized Seafood Association of Alabama, says, “Not all commercial fishermen are young, but all of them are tough.”

Don’t try this at home, Ernie cautions. “This is not something where you come in off the street, buy a shrimp boat and proclaim yourself a shrimper. Bayou families have passed down their businesses, skills and techniques for generations. You don’t learn this overnight. It takes years.”

Take Ray Foster for example, a shrimper for — and this is not a typo — 71 years. “I started at about age six working with dad, ” he recalls. Foster is still at it, dragging nets by night and selling his catch by day.

Avery Bates is a retired commercial fisherman of bayou waters and beyond. “Bayou La Batre was founded and grew because of an abundant seafood supply, ” he says. “But folks should realize when you see our shrimp boats or oyster skiffs, it is not a fleet. Each boat is usually a single local family business, owned by a local person, making a living for his family.”

Commercial fisherman Darryl Wescovich adds, “There are ever-increasing regulations and soaring fuel costs and repairs, but I wouldn’t do anything else. It is in my blood, handed down from my dad. Many of us learned to walk on a shrimp boat.”

Bayou La Batre’s Greg Ladnier has officially and unofficially worked in the shrimping business for about half a century. The president of Sea Pearl Seafood notes, “My dad started the company in 1966. I became president about 15 years ago.”

He is the second generation phasing in the third. Just as Ladnier worked with his dad, his daughter Megan and son Shawn work with him as well. Wife Janice is here, too. Together, with about 50 other employees, the company processed and shipped about 5 million pounds of shrimp last year.

“Bayou La Batre’s seafood industry has few major corporations, ” he says. “Most are like us, family-run, handed down through generations.” But, Greg adds, “Our livelihood is threatened.” 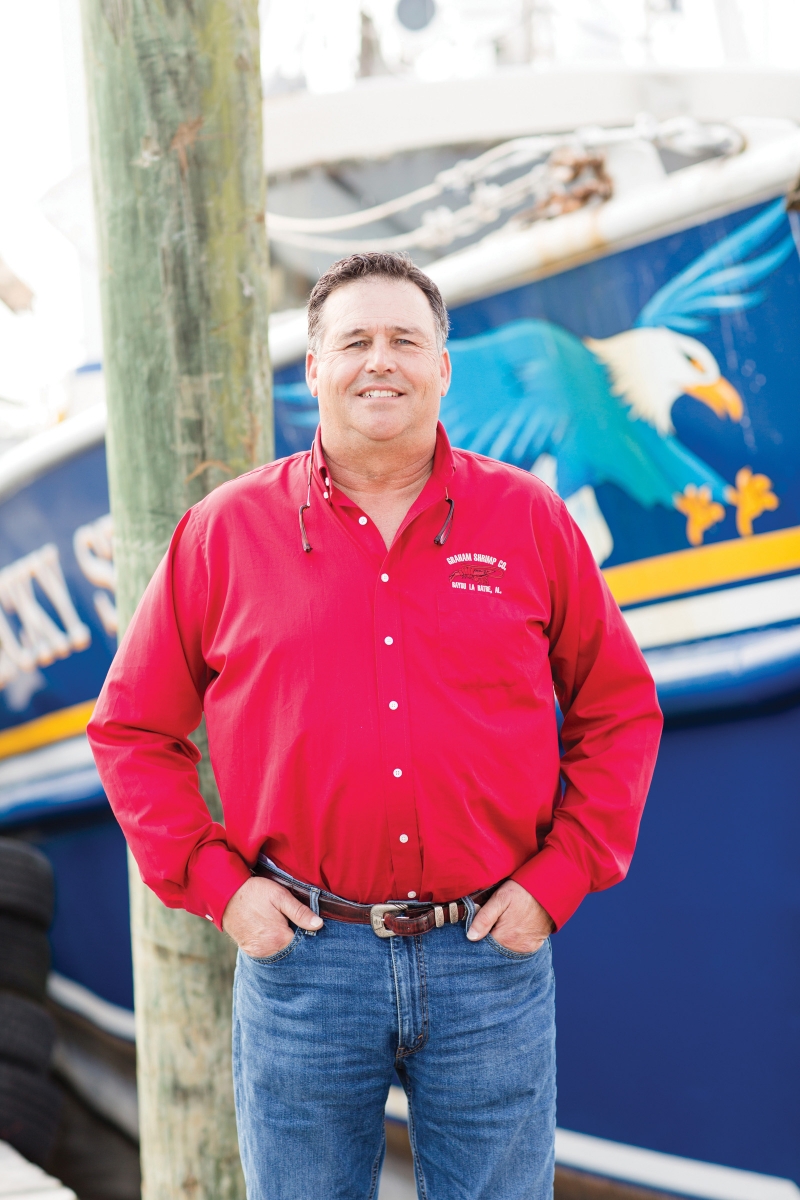 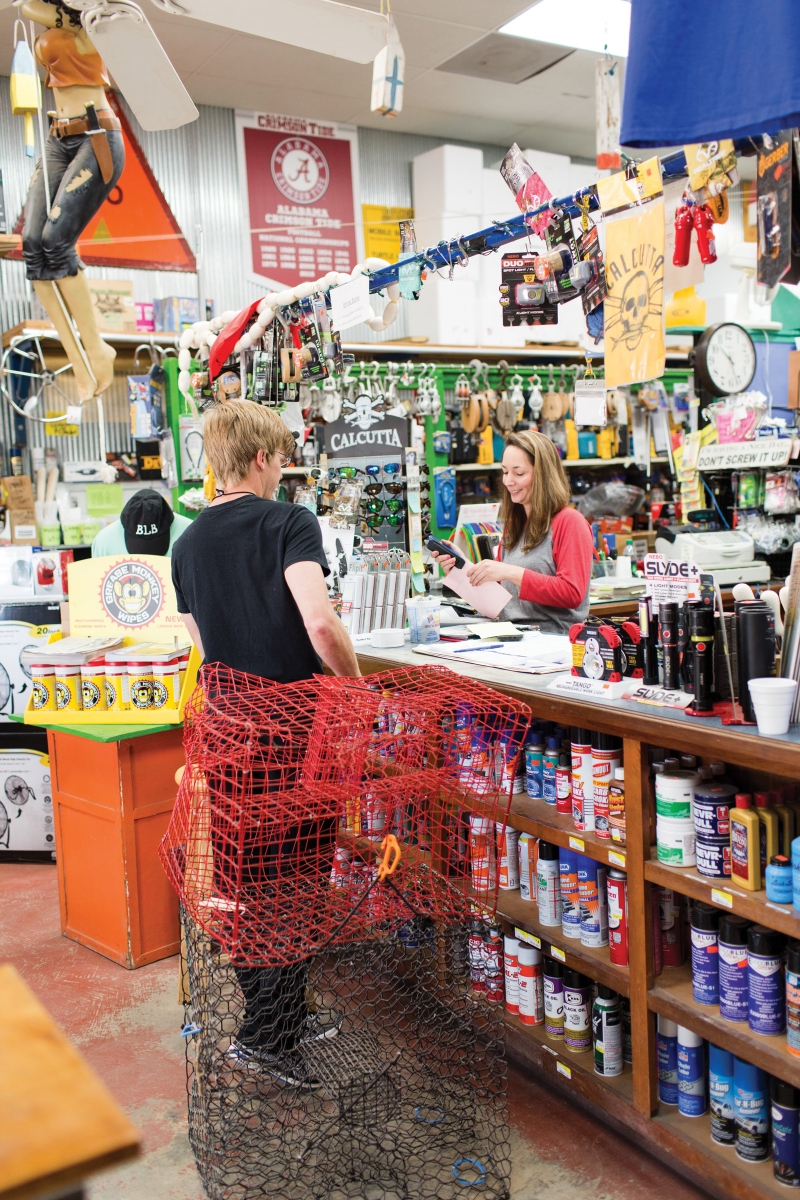 ABOVE LEFT Ernie Anderson, owner of Graham Shrimp Company and president of the Organized Seafood Association of Alabama, walks the docks and surveys his boats.

ABOVE RIGHT A customer picks up a few crab traps at Marshall Marine Supply on Shell Belt Road, a locally-owned hardware store that sells just about anything a shrimper could want or need.

But in the town that defied hurricanes, the BP Oil Spill and wavering market prices, most Bayou La Batre seafood businesses have no intention of stopping. They have invested time, money and families in their livelihood. There is no turning back, because as Ladnier emphasizes, “I’ve done this my whole life.”

And they all know each other. Ernie Anderson laughs, “We have to. That’s how we stay out of each other’s way.” 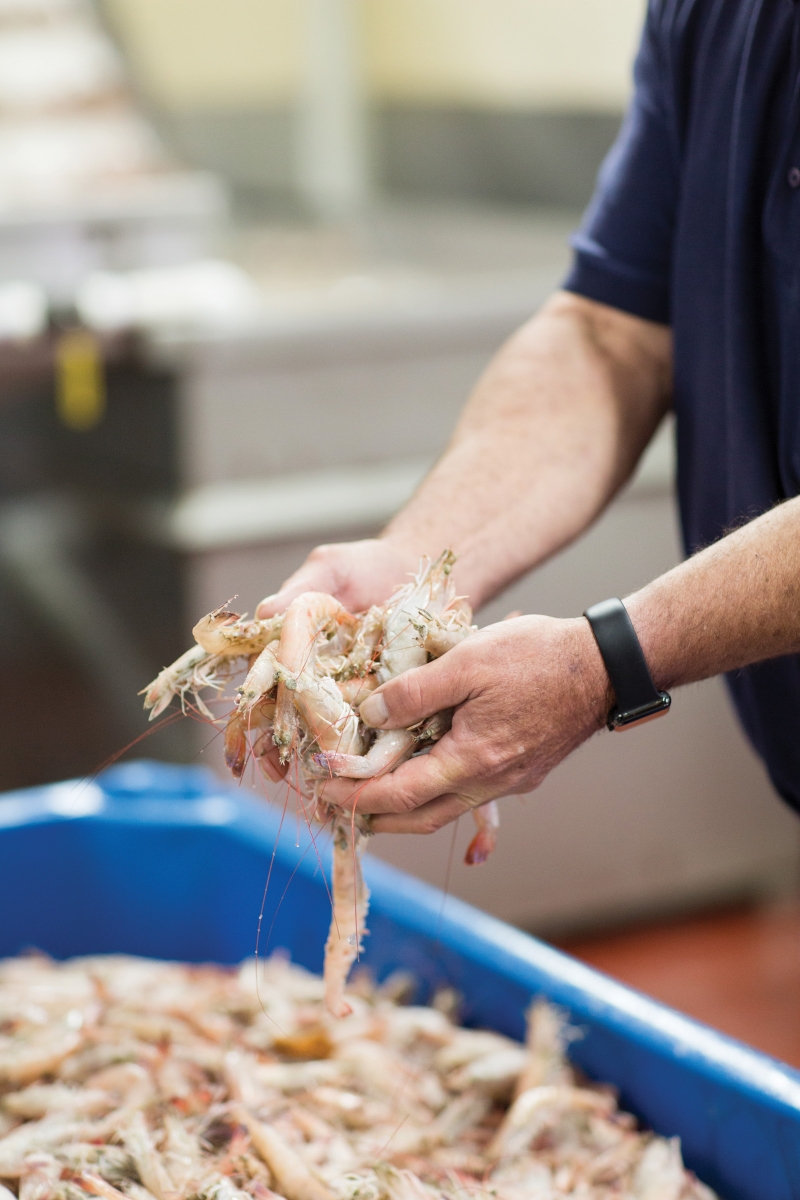 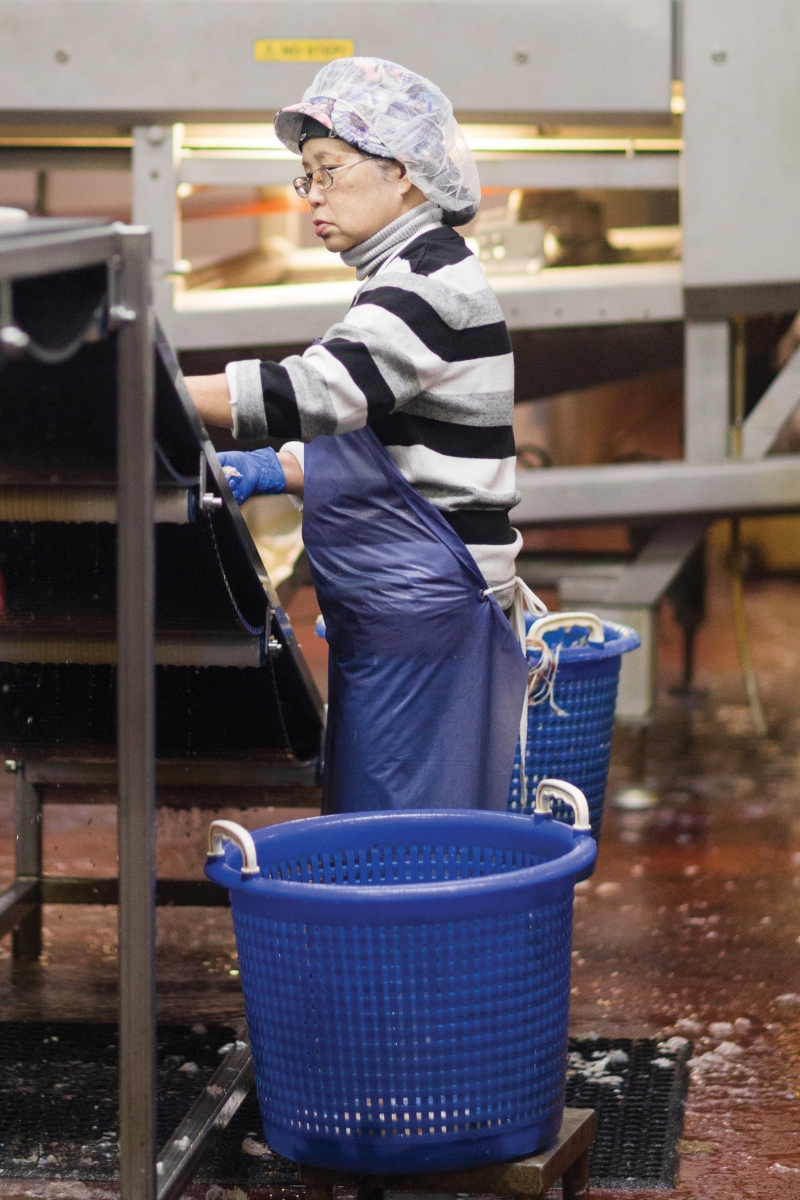 ABOVE LEFT The crew works hard at Sea Pearl’s shrimp processing facility, making sure these fresh-caught jumbos make it to your plate as fresh as they came off the boat.

ABOVE RIGHT Modern machinery makes efficient work of peeling and deveining shrimp. Workers make a final inspection of each shrimp before they are individually quick frozen, known as IQF.

A community within the community populates Mobile County’s seafood capital. They are the “Boat People, ” or descedants thereof, Bayou La Batre’s Vietnamese.

“They arrived in the 1980s as immigrants, ” says Tuan “Dave” Do, program coordinator of Boat People SOS-Bayou La Batre, a Vietnamese advocacy group. “Today we have second and third generations. Many were born here.”

For the most part, the Vietnamese community works the seafood industry in almost every job. “Many start work around 2 a.m., in the processing plants, ” Dave says. “Generally, they will get off work in the afternoon, pick up kids from school, and then it’s dinner and family time.”

They also staff shrimp boats, net crabs and work in local shipyards. Dave, who left Vietnam in 1993, estimates about a thousand of his countrymen live in the area. 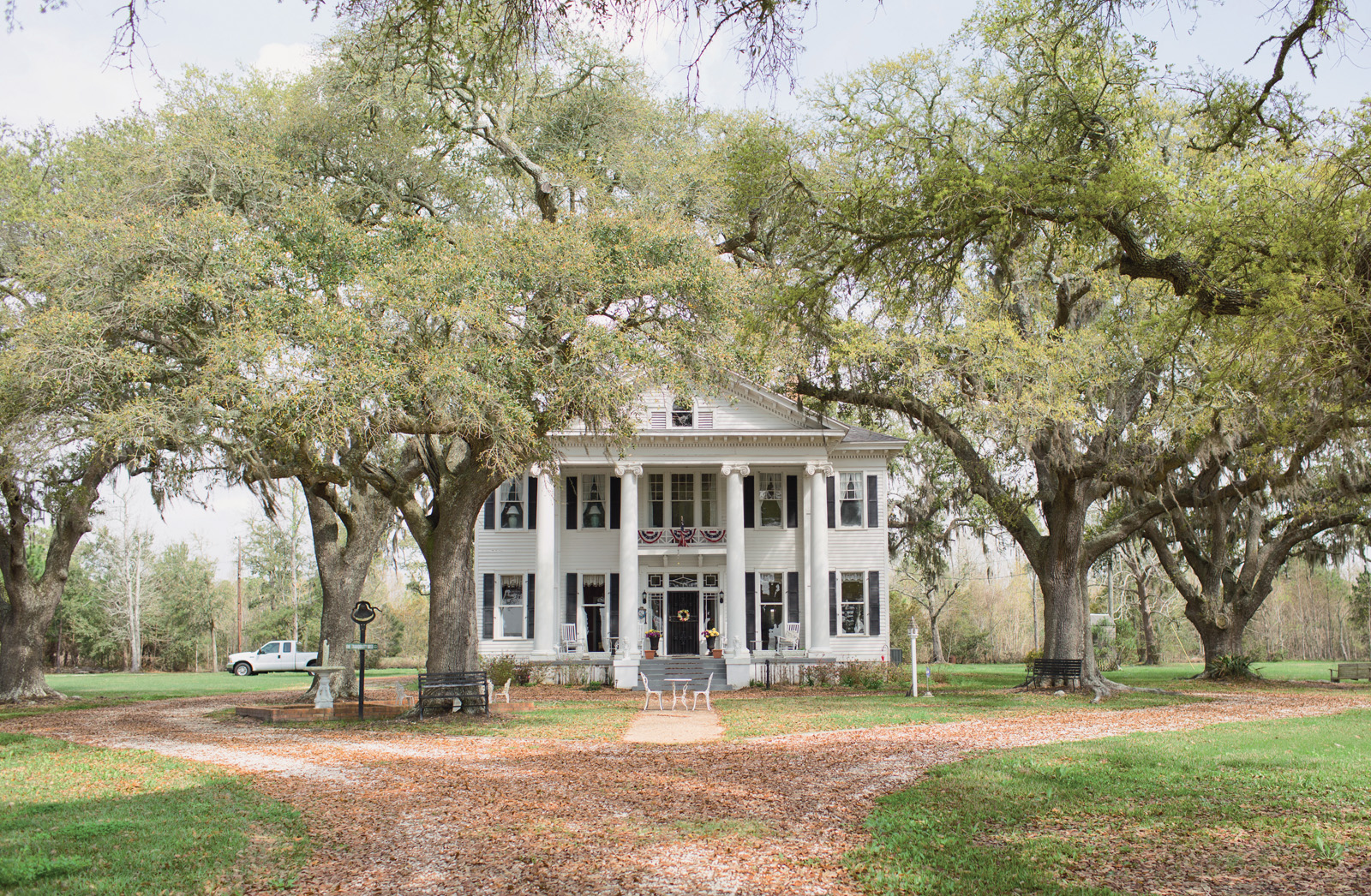 The town was named in the 1700s for a French-maintained defense artillery battery — during the same time another nearby area was making a name for itself, called “Mobile.”

“We started with wooden shrimp and work boats, ” notes Rena Landry, second-generation owner of 70-year-old Landry Boat Works. “Now it’s mostly steel and fiberglass. But we still repair wooden boats, too. Take these, for example, ” he adds, pointing at full-size replicas of Christopher Columbus’ Nina, Pinta and Santa Maria, in town for an overhaul. 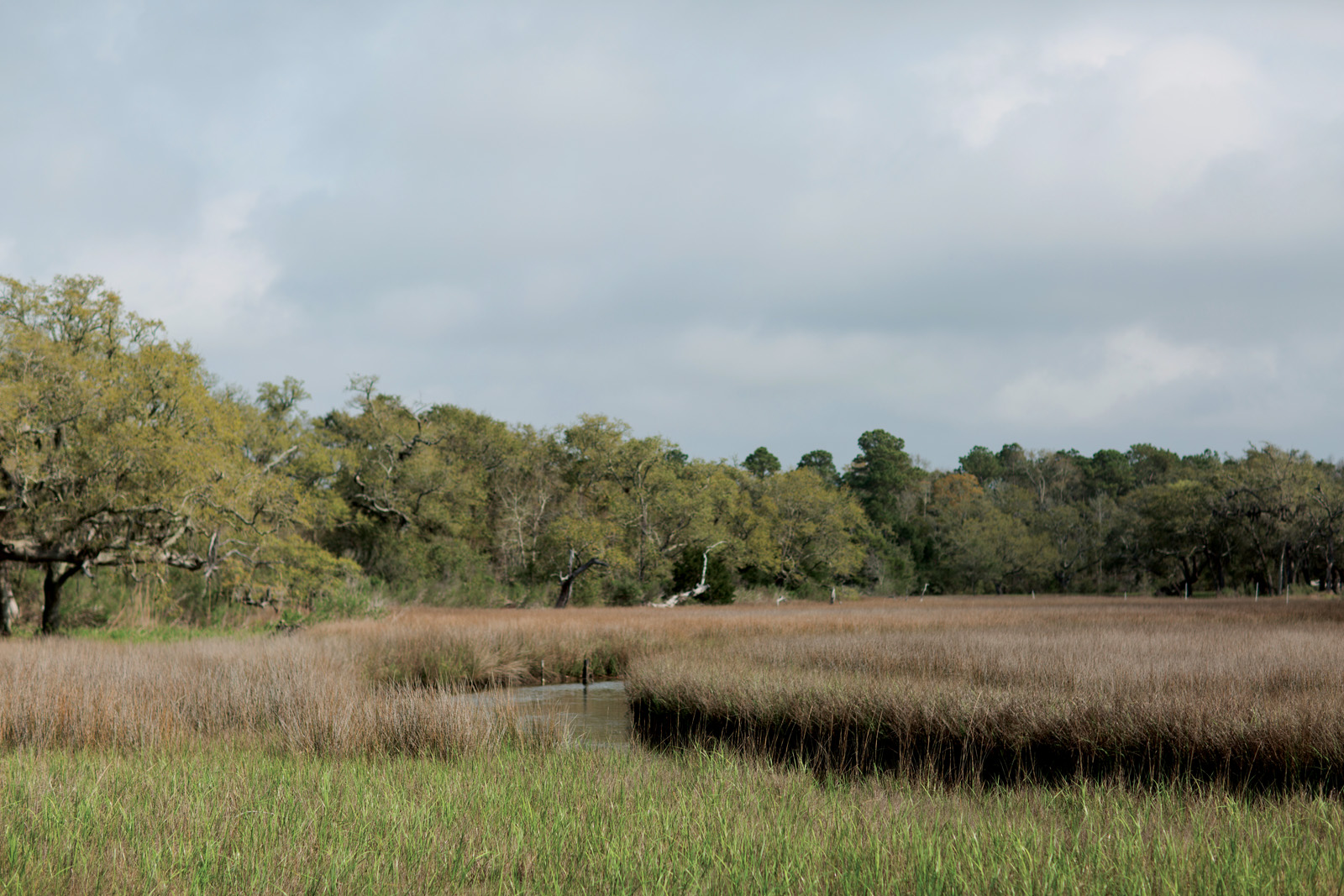 ABOVE The view over the quiet marshland just off the main drag.

Coden Belt is a road transforming commercial and industrial into recreational: bayside vistas, sports and adventure, with hopes for more. “We want to broaden our horizons with more eco-tourism, ” notes Mayor Downey. There is a push for increased children’s activities, sporting events and festivals. The annual Bayou La Batre Kayak Classic Fishing Tournament on August 4th is a good start — a weekend when the bayou is lined with a festival of fishing, prizes, live music and great food.

Speaking of food, in a town of fishermen one assumes local restaurants serve really fresh seafood. One assumes correctly.

“We get it right off the boats and into our kitchen, ” says Jennifer Stork, co-owner and manager of Lighthouse Restaurant, a 47-year local fixture. “On a good Friday evening, we go through about 100 pounds of crab claws.”

Other local favorites include the Catalina Restaurant, with ever-changing blue plate specials; Capt. Frank’s Smoke Shack, the little building with smokin’ fine barbecue; and the Sugar Rush Donut Company, because nothing satisfies that little sweet craving like a homemade apple fritter the size of a flounder.

Or, get a taste of everything at the Blessing of the Fleet. “Try the seafood-fish platter, ” notes Sylvia Sellers, the event’s director. It is a plate loaded with a composite sampling of seafood from all boats blessed.

Across the street from Capt. Frank’s is the Bayou La Batre Visitors Center and Museum, a small log cabin built in 1933 because townspeople took it upon themselves to build a city library. But the same Hurricane Katrina that left St. Margaret’s pews floating in the sanctuary flooded the library, with a 5-foot water level over the fireplace mantle.

The library moved, but the building reopened as a visitor’s center, museum and testament to perseverance.

“We have always been a community that helps one another, ” says Debbie Downey, Mayor Downey’s wife and spokesperson for the visitor’s center and museum. “People donated everything we have on display here because it’s what we do. We are here for each other.” 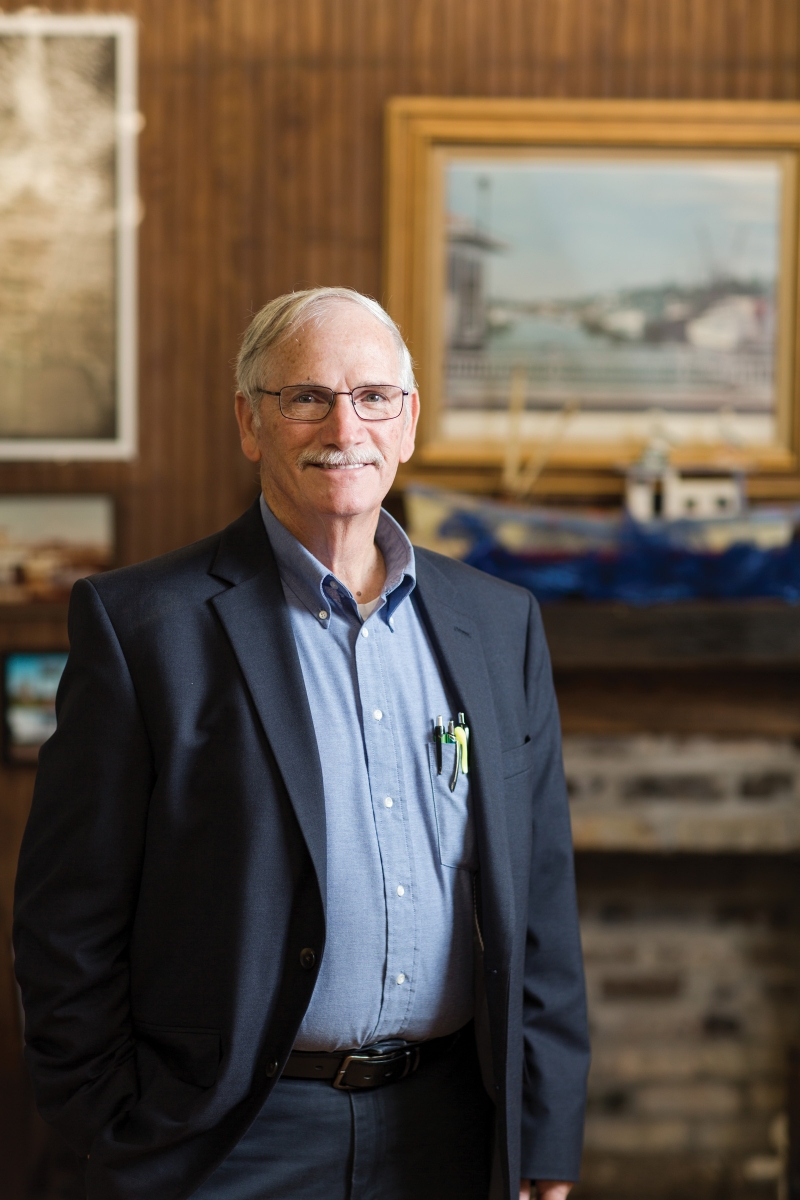 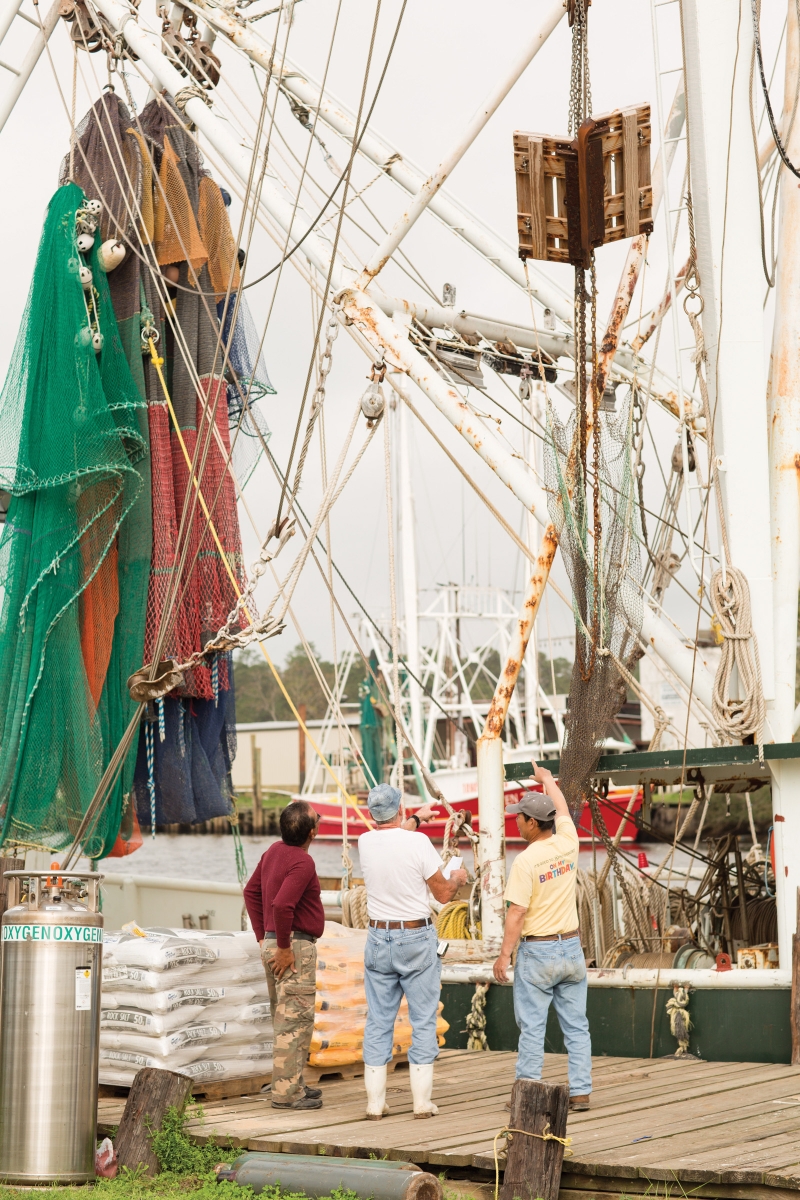 ABOVE LEFT Mayor Terry Downey shows MB around the library-turned-museum.

ABOVE RIGHT Several shrimpers inspect the riggings of their boat and discuss how to get things repaired and back on the seas as soon as possible. Time at the dock can mean money lost.

Mayor Downey adds, “Storms are a way of life. But the next day, we get up, repair what’s needed and go back to work. At times we are down but we don’t stay down.”

“The people are very genuine and warm, ” says former U.S. Surgeon General Dr. Regina Benjamin, founder and CEO of Bayou La Batre Rural Health Clinic. “Through my 30 years here, they have taken care of me as much as I have taken care of them. They are more like family than patients.”

She speaks from experience. In three separate incidences, Dr. Benjamin’s clinic was destroyed by two hurricanes and a fire. “But in Bayou La Batre, we go through tragedy and recovery together, ” she notes.

In October 2009, Dr. Benjamin was appointed by President Barack Obama to serve as America’s 18th surgeon general. In considering the presidential post, she consulted medical colleagues and others — including patients and friends in Bayou La Batre. “They were very supportive and encouraged me to take the opportunity, ” “America’s doctor” recalls.

The New York Times reported that in a July 13, 2009 Rose Garden ceremony, President Obama introduced his newly-appointed surgeon general. During his remarks, she twice assisted the president with his pronunciation of “Bayou La Batre.”

Sam Schjott, former president of the local Chamber of Commerce, sums the feelings of many about their town: “Once you get the mud between your toes, you never get it out, ” he says. “It is hard to get Bayou La Batre out of your system, and that’s a good thing. This is where our roots are.”

Roots were planted on the bayou centuries back with prayers for continued prosperity, bountiful harvests and blessings of the fleet.

2018 Blessing of the Fleet
The best way to get to know the Bayou is by attending the Blessing of the Fleet! Mingle with locals and tourists alike while checking out the gumbo cook-off, arts and crafts show, decorated boat contest, children’s activities, Bayou boat tours, a land parade and a boat parade. Hit the certified four-mile fun run down State Highway 188, then cool your heels with some fried local seafood and live music. May 5 – 6 // 10 a.m. – 4 p.m. // St. Margaret’s Catholic Church