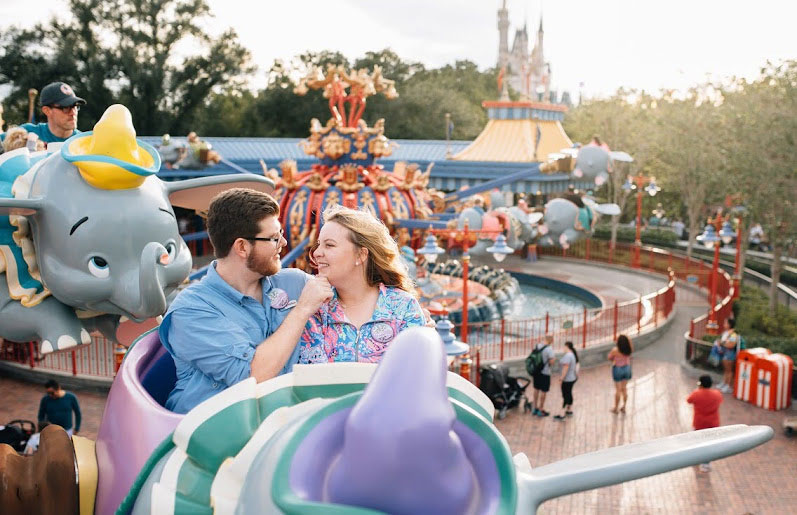 We met as freshmen at Harding University in Searcy, Arkansas. Everyone, including myself, could tell that he liked me, but I was interested elsewhere and he was too shy to say anything about it. The second semester of my freshman year, I did the Disney College Program, and being that he was a native of Orlando and had started dating someone soon after I left, I tried not to read too much into him constantly staying in touch, and we had even made plans to spend a day at Disney together as friends. As the day approached that he would be coming home for the summer, I found out that he was now single, and his pursuit became more and more blatantly obvious. After a day spent visiting all four of the WDW theme parks, and conquering every thrill ride they had to offer, we watched the recently debuted fireworks show Happily Ever After (I waited a whole week after it came out to see it so it was both of our first time). During the love song sequence, he reached out to grab my hand, and we’ve been doing life together hand in hand ever since!

He took me on a weekend getaway to our favorite place, and got to attend Mickey’s Not-So-Scary Halloween Party. The next day was spent parkhopping and on the monorail from Epcot to Magic Kingdom, I noticed he got really quiet and nervous. We strolled down Main Street, and he asked if I wanted to stop and take a castle picture. He passed his phone over to the photopass cast member and the next thing I knew, he was down on one knee and everyone around us was cheering!

I’ll give you one guess! (It’s Walt Disney World)