Ann Katherine Hardeman describes herself as a self-taught artist. Although she graduated (2005) with a bachelor of fine arts degree from Sweet Briar College, in Virginia, and even spent her junior year abroad in the art history and visual cultures program at Goldsmiths College, University of London, “I was never professionally trained, ” she says, “except for electives in high school and one drawing class in college.” The art history major, above, explains that she was always taught about art, but not how to create it.

Hardeman was an eighth-grader when her mother, Stephanie Daves, asked for paintings to decorate the family’s new beach house in Lillian. “She would flip through magazines and pick out abstract work and ask, ‘Do you think you could do something like this?’ So, I guess painting from the Sotheby’s catalog first spurred me into abstracts, ” she says.

Today, her abstracts are nonrepresentational. There are no hidden figures, symbolism or subliminal messages. She even dislikes naming her work, because the title might influence the way it’s viewed. “When people look at one of my paintings, I want them to be able to interpret what it means to them. It really is all about what they see.”

Hardeman’s strategy is strictly intuitive. “It’s pretty fast and furious, ” she says, laughing. “There’s no preplanning. I don’t sketch. I choose the main colors, and then I just go for it.”

This past fall, her colorful canvas “Combustion, ” left, 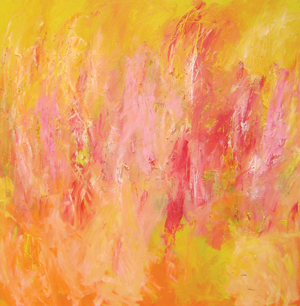 was included in a “Best of the Web” article in the November issue of InStyle Magazine. The “sold” sticker next to the image on her website didn’t diminish interest in it. In response, she’s done similar works, a series, roughly the same size and style. Although she will add to a series, don’t expect her to create the same piece twice. “I don’t want to focus on one style, or one medium. If I have an idea that I like, I’m going to paint it.”

Her techniques are completely spontaneous, too. The triptych in her parents’ home is a prime example. Although the panels are supposed to be viewed together, there wasn’t any conscious attempt to connect them — no line, shape or tone started on one canvas and continued on the next. She used watered-down acrylics to mimic the look and feel of watercolors. Hardeman rotated the canvases as she worked, primarily to allow gravity to create natural runs and drips in the fluid paints. “I painted them and then looked at them in different orders. We rearranged them five times. I think they work really well in here, ” she says.

Experimentation has been a big part of her art’s evolution. Until a couple of years ago, Hardeman worked in acrylics. Then, she decided some of her ideas could be better expressed in oils (particularly in small pieces and those in which she wanted to build up depth and texture). It hasn’t exactly been a flawless transition, though. 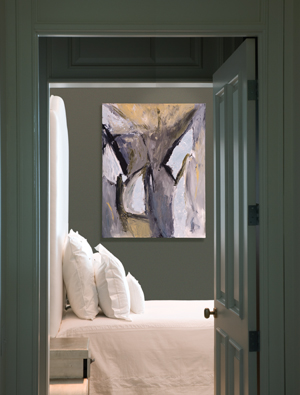 “The painting is still frantic. If there’s a pause, it’s due to the long drying times that drive me crazy, ” she says laughing. “About a year ago, I started using more alkyd oils (which dry much faster) and adding medium to the regular oils to enhance the drying time. That’s worked well, ” she continues. “Oil also is very messy, and normally when I paint I get it all over me. It can take a lot of turpentine to get off!”

The abstract artist accepts commissions in both media and especially enjoys creating pieces that are designed to fit a particular space. “People often send me fabric swatches and say, ‘These are my colors.’ Or they’ll see something on my website and say they really like that piece, but they want it bigger, or smaller, or with more red in it, ” she says.

Although Hardeman is a recognized professional with a busy painting schedule, her parents continue to request pieces for specific walls in their home. The artist is still more than happy to oblige.