With thousands of public acres and many excellent private fields and forests in our own backyard, South Alabama sportsmen need not travel far to indulge a favorite pastime. Starting each September, when dove season kicks off, there’s a variety of plentiful game birds to hunt within easy driving distance.

Excitement is in the fall air for the outdoorsmen — and their families. While the marksmen walk the fields or stake out their hiding places, non-hunters enjoy the crisper weather and catching up with friends or relatives at camp. Gossip is exchanged along with recipes for  side dishes to compliment the day’s bounty. At sunset, the hunters return from the fields to clean their game, throw the birds on the grill, and appreciate unhurried camaraderie.

Mourning doves, numbering at nearly 500 million, rank among the most common game birds in North America. The extremely swift and agile fliers can exceed 55 mph. With twisting, erratic flight patterns, the doves can challenge even the best shooters. In flight, their broad, elliptical wings make distinctive fluttering whistles, especially noticeable when the birds flush, or quickly evacuate a resting place. This sound, along with the mournful cooing call that gives them their name, announces their presence.

Doves generally prefer drier fields and agricultural lands. The fowl can often be found at the public Boykin Wildlife Management Area (WMA) near Citronelle, which covers 17, 785 acres of Mobile and Washington counties. 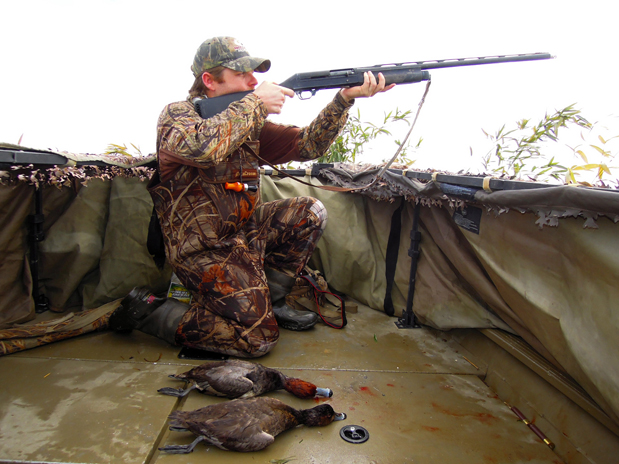 Steven Ladner takes a shot at incoming ducks during a hunt in the Mississippi Sound between Bayou La Batre and Moss Point, Miss.

Many duck hunters use small boats to hunt the Delta. In addition, navigable waterways such as Mobile Bay and the Mississippi Sound belong to the public, so sportsmen can set up boat blinds, or vessels camouflaged in reeds and grasses, almost anywhere — except where prohibited by local laws. In these marshes, lakes and bays, are found duck species, such as green-winged teal, blue-winged teal, gadwall, redheads, scaup, canvasbacks, pintails, wigeons and others.

“Wood ducks are especially common in Alabama and very common in the Mobile-Tensaw Delta, especially the forested northern Delta, ” says David Hayden, of Alabama Division of Wildlife and Freshwater Fisheries. These birds often stay in swamps all year long, although some also migrate into Alabama from Tennessee, Kentucky and other states during the winter. Considered among the most handsome waterfowl species, “woodies” usually fly very early in the morning and late in the evening. Before sunrise, wood ducks leave their roosting areas to flock to feeding locales and return after sundown. When waiting in the right place, sportsmen can enjoy furious, if brief, shooting at first light as these swift and shifty fliers dart and zigzag through the trees.

QUAIL
The King of Fowl

Bobwhite quail, considered by some the most majestic of all native North American game birds, stay in upland country such as brushy fields, agricultural lands and pine forests punctuated by undergrowth. In recent years, the wild quail population dropped considerably for many reasons. “It has been declining for decades throughout the Southeast, ” laments Carrie Johnson, a state biologist. “Most of the decline has to do with agricultural changes. Farmers don’t leave any fencerows up anymore. Quail don’t have any cover from predators, and predator populations are increasing.”

Some landowners specifically manage their properties to create habitat for “gentleman Bob, ” as they are also known. Commercial shooting preserves often supplement the wild population by releasing pen-raised birds on their property. Sportsmen may also hunt pen-raised birds for extended seasons without limit.

“We have some wild quail, but good pen-raised birds are actually harder to shoot than wild birds, ” says Keith Walker, owner of the 2, 300-acre Taylor Creek Shooting Preserve near Bellingrath Gardens in south Mobile County. “Wild birds live in those fields and already know where they want to go before anyone flushes them. When they get up, they all go in the same direction. Pen-raised birds that haven’t been out in the wild too long don’t know where to go. They’re unpredictable when flushed and might go in all directions.” 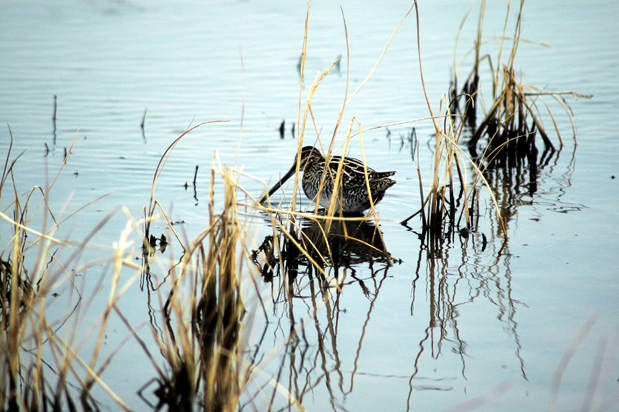 A snipe is easily camouflaged by swampland and grasses while feeding in a soggy field.

SNIPE
They Do Exist – Honest!

Real snipe hunting is not to be confused with the legendary prank “snipe hunting, ” wherein jokesters tell gullible victims – often inebriated, neophyte outdoorsmen – to go into the woods at night holding sacks and making “snipe noises.” The pranksters claim they will chase the game to the “hunters, ” who should catch them in their sacks. Instead, the poor chumps are left stranded and embarrassed.

The authentic sport is quite different. However, these swift and erratic shorebirds can humiliate even the best wingshots. “Sniper, ” the military term for an expert marksman, originally described hunters skilled enough to hit these birds in flight.

To pursue these diminutive long-billed birds, sportsmen walk through soggy fields or marshes. These feathered firecrackers often freeze in the grass, exploding from cover with no notice. When flushed, snipe generally fly quickly and fitfully, but seldom for long. They frequently land again in the same or an adjacent field. Hunters can mark snipe landing sites and keep jumping them for hours. This is not a target for the weary, but the prize of a kill is one to brag about.

These birds look and act very similar to the aforementioned, although they prefer hardwood bottomlands to marshes or soggy fields. Like snipe, woodcock sport very long bills, which they use to probe soft dirt for earthworms. Comparatively, woodcock also stay in thick cover — the thickest they can find — for as long as possible, using their rich brown coloration as camouflage. When almost stepped upon by the hunter, woodcock burst from cover and zoom off, zigzagging through the timber like radar-guided smart missiles.

“Woodcock won’t be in standing water, but they’ll be along the shorelines and dry spots near the water, ” Hayden explains. “A lot of areas in the river delta near Mobile are too wet and marshy for these creatures, but some of the slightly higher lands along the river with good bottomland timber have good numbers of woodcock at times.”

Even in the best habitat, woodcock may appear and disappear almost overnight. A cold front may push thousands of birds to the Gulf Coast. A few days later, they may disappear completely.

Whether hunting doves, ducks or pen-raised quail, Lower Alabama sportsmen are blessed with fields, forests and rich wetlands that offer a plethora of prey. Hunters can take their pick of many types of upland or wetland hunting for a mix of outstanding action from September through February.

For season dates and bag limits for each species, visit outdooralabama.com.