Some are arachnids-in-disguise who swoop to and fro between towering skyscrapers to rescue redheaded damsels in distress. Some boast bodies of steel and soar among the clouds, battling to save the planet from bald-headed, radioactive rock-collecting villains. Still other “uncaped” crusaders are gifted with the amazing — and often hidden — powers of mentoring, educating and strengthening the youth of our own bayside Metropolis. Here, MB unmasks nine men and women who make Mobile a better place for all kids.

“I wish the Snook Youth Club had been around when I was a kid, ” says Monica Henry. “I first became involved with the center about two and a half years ago. It’s an awesome place for local children to come after school every day.” In addition to providing enriching extracurricular activities and academic tutoring, the organization offers its members, youth ages 6 to 16, invaluable opportunities to travel around the country and explore future career interests, including those in the arts.

Her superpower My strength. I’m able to handle things even in difficult circumstances.

On an ordinary day … My schedule varies every day. I coach cheerleading and tumbling in Mobile at Planet Cheer and Tumble (where she is co-owner). I’m the dance instructor at the University of Mobile. Then, I teach ballet, jazz and modern dance through the Snook Youth Club’s Saturday Dance Project. In all, I teach about 300 students each week. I also do some modeling and acting.

Scott Novak loves tennis, and he has made it his mission to pass the racket on to Port City kids. Through a grant from the U.S. Tennis Association, Novak, as well as collegiate players visiting Mobile for tournaments hosted at the Tennis Center, were able to volunteer countless hours as visiting instructors in local physical education classes at public and private schools. “We also lend them rackets, nets and balls while tennis is part of the curriculum.” This outreach impacted more than 16, 000 students last year.

Summer camp isn’t just about swimming in the lake and toasting marshmallows, it’s a rite of passage – one that Cecy Lowell and United Cerebral Palsy of Mobile (UCP) want all kids to experience. Over three week-long sessions, nonprofit Camp Smile provides adventures to about 320  children, ages 5 to 20, with all sorts of disabilities, as well as typical siblings.

On an ordinary day … At camp, I’m up at 6 a.m. organizing. After breakfast, I lead activities until lunch. We offer horseback riding, boating, fishing, swimming, arts and crafts, science, zipline, journaling and talent show. After lunch, kids have rest time (although I don’t). Then I run activities until dinner. At night, I entertain the staff with games.

Her superpower Campers call me Megamouth since I can command a room without a mic.

Her kryptonite Summer heat, but I can’t let it stop me

Her superheroes Our camp leaders. Many grew up coming to help, have gone on to get special ed degrees and returned. They take vacation from their regular jobs to volunteer. Couselors are local high school students.

Not so long ago, Mirna Deakle was an attorney in the Yucatan Peninsula of her native Mexico. Her desire to study abroad and learn English brought Deakle to Spring Hill College 16 years ago. While in the Port City, love bloomed, and she found herself a newlywed and living permanently in a new land. (She is now a proud U.S. citizen.) Today, through Mobile County Public School System, she assists other migrant  and non-English-speaking families who are acclimating to American culture and educational expectations.

Her superpower My bilingual skills

On an ordinary day … I’m a liaison between parents, students, teachers and administrators. More than 50 languages are spoken in Mobile County. So we contract with interpreters and work with the Refugee Resettlement Program to offer resources to guide them.

Her kryptonite Barriers, language or otherwise. Some days it can be frustrating, but in the end, it’s all about helping the children.

Her greatest feat Seeing our ESL students graduate, especially ones who have struggled and overcome great challenges

Her superheroes My parents. My dad, with only a third-grade education, became the manager of the first Sears in Mexico. My mother raised 6 kids, and we all turned out well.

Math and science teacher Joe Gaston has infinite powers. Students and parents alike applaud his enthusiasm for educating young minds and his ability to instill confidence in them. Outside the classroom, he can be found on the baseball diamond, alongside wife Lori, coaching children with special needs in the Buddy Ball league. (In 2010, he was awarded Volunteer of the Year for Mobile Association for Retarded Citizens.) And, last summer, as an international faculty member with Mickelson ExxonMobile Teachers Academy, Gaston traveled around the world to train upper elementary math and science educators and improve curriculum in Doha, Qatar.

On an ordinary day … I teach math and science classes to about 60 kids. After school, there’s astronomy club, math team or tutoring. Then I teach as an adjunct professor at Spring Hill College. Later, I’m hurrying over to Pensacola where I’m working on my doctorate at University of West Florida. Eventually, I get home to my family.

His kryptonite I don’t like hypocrisy, cheesy music or tomatoes.

Since 1864, Wilmer Hall has been a sanctuary for children who have no home or cannot live with their natural parents. But recently, as affordable housing and daycare have become more difficult to come by for many young adults, the faces of homelessness are changing. Wilmer Hall has imple-mented a new transitional living program for those who work, attend college full time or do a combination of the two. “There are young adults, like Jenna (far left), who need a hand up, not a handout, without added pressure of ‘where am I going to live?, ” says executive director Sally Greene. “We’re now renovating two cottages to expand that program.”

Her superpower Mothering. That’s why I love my job. We have 30 children on campus, and I have three biological children.

Her superheroes We’re blessed to have wonderful staff and an excellent group of children. I’m so proud of them. They have faced a lot of challenges. I’m not Pollyanna-ish. These children are here because of some very difficult circumstances. I think we’re all called to respond to one another’s needs. Hopefully, we’re doing that in a small way at Wilmer Hall.

In a recent study conducted by Big Brothers Big Sisters of South Alabama (BBBS), 100 percent of “littles” showed increase in self-confidence and improved academic performance. “When my three boys left the nest, I decided that I wanted to get matched up in Big Brothers Big Sisters, ” says volunteer Caine O’Rear. “I started 12 years ago in the community-based program with a second grader. He was my little brother until he graduated high school. He’s in college now, ” adds O’Rear, who was the 2010 Big Brother of the Year award recipient for the state of Alabama. “Then I continued on in school-based mentoring, and Lorenzo is my third ‘little’ in it. I go spend time with Lorenzo at school every Thursday. Our law firm partnered with Brazier Elementary in Trinity Gardens, and we now have 35 employees who are ‘bigs’ there.” The program is currently recruiting mentors, especially males.

His superpower My willingness to give back

His greatest feat Being friends with Lorenzo. The most proud I’ve ever been of him was when he made all A’s and B’s on his report card. 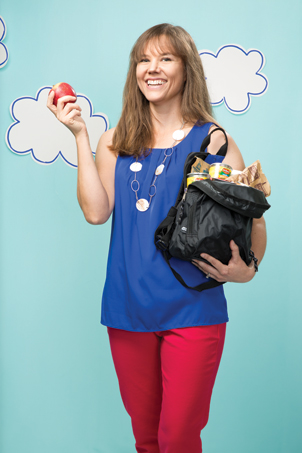 Childhood hunger is not an issue limited to third-world countries. In fact, most locals don’t realize that this is a dire problem on our homefront. In the past four years, grocery distribution through the Bay Area Food Bank, which serves populations in Alabama, Missisippi and Florida, has increased 60 percent. One of the organization’s most unique distribution methods is the Backpack Program. Teachers, administrators and counselors pinpoint families in need. Meanwhile, volunteers and members of service organizations, such as Junior League of Mobile, bag nutritious nonperishables, such as fruit cups, macaroni and cheese and oatmeal — all items that children could prepare themselves, if necessary. Then, they deliver them to the schools. “We never even know the recipents’ names. The teachers just slip the sacks into the children’s backpacks so it doesn’t call attention to or embarass them, ” says Kelley, who was also chosen as one of MB’s 2012 Forty Under 40 recipients. The Food Bank serves 750 youth in Mobile and Baldwin Counties alone. The cost to support one child for a school year: about $125.

Her greatest feat Helping our programs grow by leaps and bounds over the past eight years. We’ve increased the number of children we are able to serve by 500 percent. 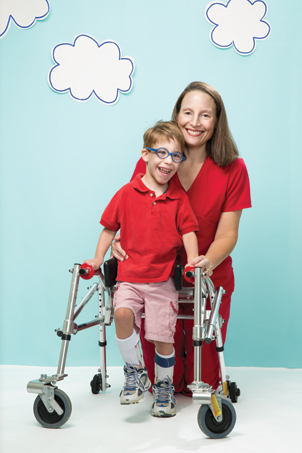 The power of mobility can change the life of a child with physical challenges. Just ask pediatric physical therapist Cheryl Thames. “I see children every day who overcome tremendous obstacles to do amazing things, things that doctors said that they may never do!” Her unique therapy methods, along with her ability to strike the perfect balance of challenging and encouraging young patients, help to create what she calls “little miracles.”

Her superpower Perseverance. But the patients that I see for therapy are truly inspiring!

Superhuman ability she’d choose I’d love to be able to duplicate myself so I could be two places at once.

Her kryptonite Negative people with no drive

Her greatest feats My children and opening my own private practice

ABOVE Thames with physical therapy patient Andrew Carpenter, 4. His mother, Amy, says, “Ms. Cheryl has been working with Andrew since he was 8 months old. She has so much hope for her patients’ futures and their abilities to achieve anything that they possibly can in their little bodies. She does everything she can to bring that out of them, despite their disabilities. Andrew has gained so much independence because of her help and guidance. One of the greatest moments for me was Dec. 21, 2011. While Andrew was at therapy, right in front of all of us, he marched off and took three steps. It was the greatest gift!”