Sounds of giggles and chatter make their way across the shimmering lake. From the shore, onlookers, former Girl Scouts themselves, watch as their daughters — and granddaughters — navigate canoes, face fears and master team building. The girls’ vessels send ripples across the sky-reflected water, and as they come ashore, bare, sandy feet rush about in search of shoes before heading off down the pine-straw-strewn trail that encircles Echo Lake. Moms and grandmoms look at one another with knowing smiles. It wasn’t very long ago that they, too, were here having the same kind of fun. They chuckle as they scurry to catch up.

For 75 years, Scoutshire Woods, a beautiful refuge tucked away in north Mobile County, has been a home away from home for thousands of South Alabama Girl Scouts. The camp celebrated its milestone anniversary with the Diamond Jubilee, a weekend in October that included camp favorites, like canoes, archery, crafts, a campfire with s’mores, and songs and skits. One alumna, 72-year-old Harriet Nihart, attended the event and says it brought back incredible memories.

“I was there for two to six weeks every summer until I was in ninth grade,” Nihart says. “We loved canoeing down the Escatawpa River and camping on the sand dunes. Some friends and I would stand on either end of our canoes and bob them back and forth until someone fell off. My favorite memory, though, was in junior high when we decided to hike four miles to the nearest fire tower. We didn’t know they had torn it down, so we just kept hiking and hiking — we ended up walking 20 miles into Saraland, and they had to send someone to come get us.”

Nihart says her time at Scoutshire Woods changed her life in many ways, and she knows it’s done the same for thousands of girls over the past seven-and-a-half decades. “It made me a richer person, gave me a greater appreciation for the outdoors and all of God’s creation — plus the friendships we made have lasted to this day. I had one friend who I’d bob canoes with every summer who I only saw at camp. Now, we see each other every week at the senior center. Scouting has been a blessing.”

“Girl Scout Camp is such an important experience for our girls,” says Karlyn Edmonds, CEO of Girl Scouts of Southern Alabama. “They get to be outdoors, unplug from their devices and make friends in a really unique environment.”

Scoutshire Woods sits on 68 acres and features a 12-acre lake, trails, campsites, ziplines and — notably — no cellphone signal. The camp is unique because it offers horseback riding in addition to other traditional camp activities.

Jeannie Napper, GSSA awards specialist, says the camp is an important place for troop leaders as well. “I have made so many happy memories there doing things with my daughter and her troop growing up. I can see the changes in myself going up there,” she says, reflectively. “When I spend a day at camp, I never think about my phone. I’m fully engaged in the moment right in front of me. That’s crucial for everyone. The silence and the peace found in the woods is vital for all of us.”

Scoutshire Woods, originally built as Cedar Creek State Park in the 1930s, was constructed by the Civilian Conservation Corps, a volunteer work relief program for unemployed, unmarried men. In the 1940s, the park was sold to the Mobile County Public School System, and Girl Scouts of Southern Alabama has leased it from MCPSS since 1945.

“At the Diamond Jubilee, we gathered the girls and had them turn around and look at the lake,” Edmonds says. “I told them to think about how that lake was constructed — this enormous lake was hand dug. Their jaws dropped as they were thinking about that. Knowing the history of the place adds to their appreciation of where they are and what came before them.”

The future of Scoutshire Woods — and Girl Scouting in general — remains anchored in tradition while evolving to accommodate younger generations. 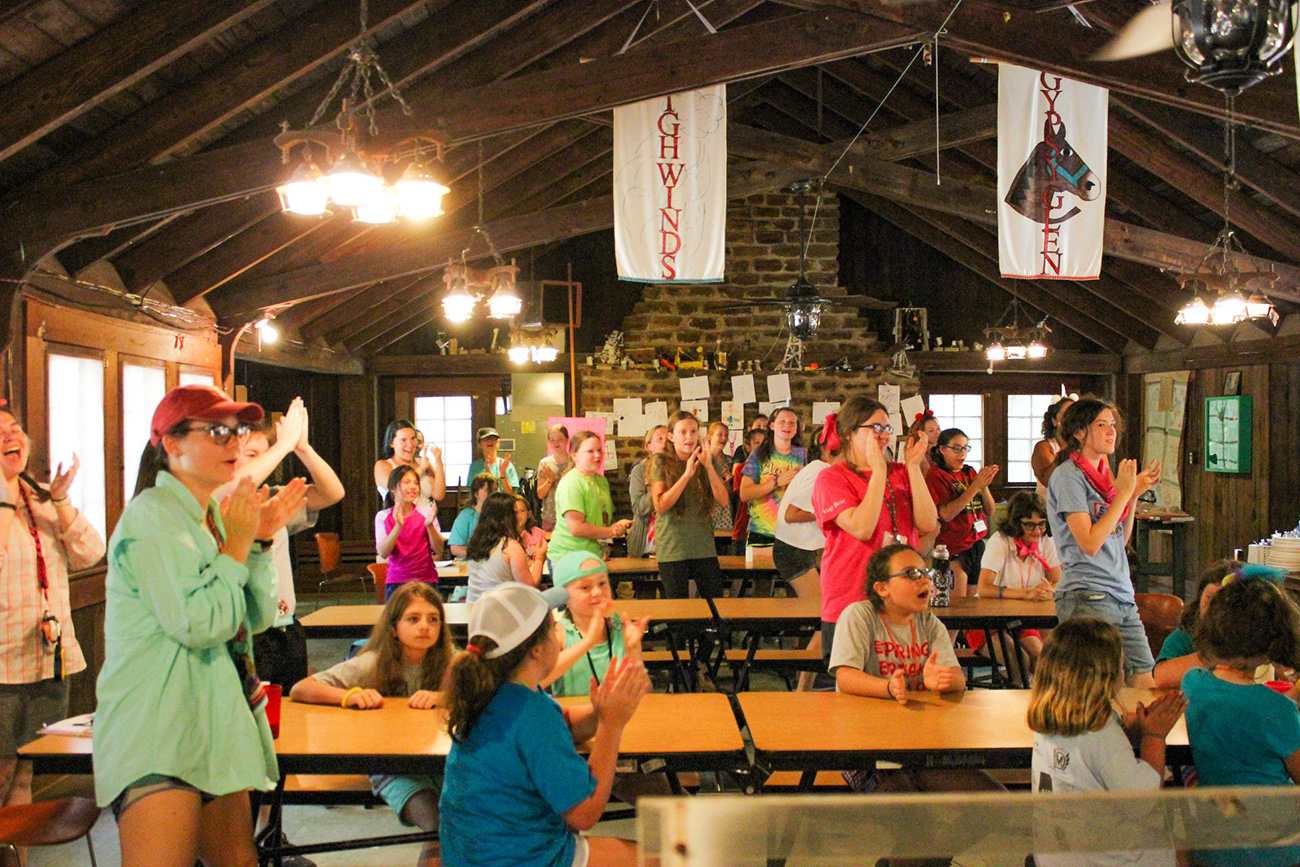 “We are definitely listening to our girls and what they want to experience at Scoutshire,” Napper says. “We recently opened a new campsite for hammock camping, which is a hot thing for high school and college kids. The girls wanted it, so a group cleaned up the campsite, installed anchors for the hammocks and added picnic tables and fire rings.”

Edmonds says the addition of engineering activities to the list of options for campers in recent years has been an important change.

“We’re trying to encourage these girls to take a deeper dive into particular areas that will empower them for the future,” Edmonds says. “They’re making catapults in addition to traditional camp activities and doing some higher-level activities that involve science, technology, engineering and mathematics. It’s wonderful to see light bulbs go off for our girls — they know they can do this stuff, and perhaps they can even have a career doing it.”