Kelley Christine James and Kevin Daniel Williamson were united in marriage by the Rev. Mateusz Rudzik at the Cathedral Basilica of the Immaculate Conception on May 14, 2016 in Downtown Mobile.

The bride is the daughter of Mrs. Gail Vogtner and Mr. Robert Glenn James, and the stepdaughter of Mr. Robert Vogtner. The groom is the son of Mr. and Mrs. Mike Williamson.

The bride wore a Julietta ball gown of tulle and soft ivory satin designed by MoriLee. Its bodice was enhanced by a sweetheart neckline adorned with crystals. Her cathedral-length veil was bejeweled with crystals to complement the bodice of the gown. Her hair and makeup were done by Sarah Morton. The bride carried a bouquet of cream and snow white bell-shaped campanula blooms with cream hypericum berries created by Ron Barrett.

Following the ceremony, the guests joined the bride and groom in a second line parade led by the Exclesior Band. The festive group marched from the Cathedral down Conti Street to the reception at the Ezell House. Barrett Greer and their creative team decorated inside and out. Guests sipped on two specialty drinks, Blushing Bride and Apple of His Eye. The food, catered by Naman’s, featured a grilled cheese bar and other tasty delights. The three-tiered wedding cake with fresh flowers on top was created by Couture Cakes.

Guests danced the night away to the band D Play Entertainment from New Orleans, LA. Kim French of One Fine Day Photography captured photos, and Lydia Noble of Noble Events coordinated the wedding. The bride and groom made their exit to the University of Alabama’s fight song as a trolley, provided by Gulf Coast Tours, awaited to carry them away. After a relaxing honeymoon at the Sandals Royal Bahamian in Nassau, Bahamas, the couple now resides in Mobile. 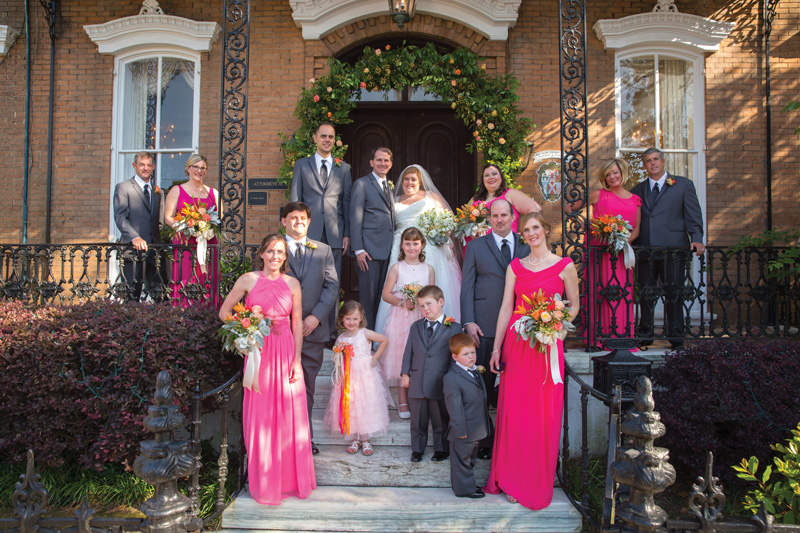