I remember filling out my application for the University of Montevallo when I was a senior in high school. Last name. First name. Middle name. Name you go by.

Hold the phone! “Name you go by?” Are they telling me I can pick any name I want to “go by?”

Now it didn’t occur to me at the time that Daddy and his twin “went by” nicknames for their middle names. Or that I had a friend named Mary Louise who “went by” Sisy. I’ve always been unable to see the Amazon rain forest for the twig, so I was captured by the enormous possibility in those four words — name you go by.

Svetlana. Exotic, worldly, foreign. Maybe I could be a spy and smoke clove cigarettes and watch the frilly sorority girls from behind dark glasses with scornful disdain. Where is my beret?

No one knows me there. No one.

Maeve. The artist, barefoot, aloof, wildly talented. She drinks ouzo and dances around the fire with reckless abandon. Long skirts and paint-stained shirts.

I won’t be the new girl — everyone will be new.

Missy. Fraternity little sister, dingbat with a heart of gold. Blond and cute, studying interior design so she can share the healing powers of pink with all of mankind or at least Macy’s.

Nope, can’t pull that off.

Dixie. Beer drinkin’, truck drivin’, football watchin’ gal who’s one of the guys. She might spit, but it would be cute and not nasty. She can gut her own fish and look good doing it.

Nah. I stared at that blank on the application. Thought and stared. Stared and thought.

Some people do graduate and go on to greatness realizing that expansive new chapter of bettering themselves and helping their downtrodden brother with the help of our Lord and Savior Jesus Christ, all while raising hydroponic strawberries, recycling, and rescuing abandoned puppies.

Unfortunately, and back in reality, that’s not really how it works.

The rest of us start off with a head full of dreams only to realize that when you get there, no matter what you “go by,” you’re still the same person you ever were. Bad in math. Can’t afford grad school. Country when country isn’t cool.

We do, however, still manage to learn — both in the classroom and by being confronted by the real world for the first time ever. We try to better ourselves if by “better” you mean learning how to drink beer and not wind up in a pool of your own vomit. We make friends, some that last for a lifetime and some that don’t last until the end of the semester. We quote Nietzsche and Led Zeppelin and marvel at our own intelligence and wit.

We learn to get by and get along. We learn that sometimes you fail, and it’s not the end of the world. We learn that everyone doesn’t like you, but many more people do. We learn that you can indeed eat Cap’n Crunch for three meals a day.

And we learn to live — passionately and ferociously — hoping for greatness but content in the now.

Born and raised in Citronelle, Atkins shares stories about growing up and living in the South in her book,“They Call Me Orange Juice,” and at her blog folkwaysnowadays.com. 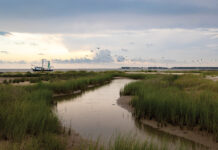