At Middleton Farms, the past is always present.

At least that’s what owner Robert Middleton says, and he would know. Robert’s father, W.K. Middleton, started the dairy in 1948. Now that Robert runs the farm with his two sons, Shane and Jeff, he’s the bridge between the old-timers and the young’uns, the old school and the new school, the days when Gulf Coast dairies thrived – and the days when Gulf Coast dairies died.

But Middleton Farms still stands. As I turn off Airport Boulevard near the state line, the question I want answered is “why?” Why has this cow dairy farm lasted when more than 2, 000 others like it in Alabama have shut their barn doors? 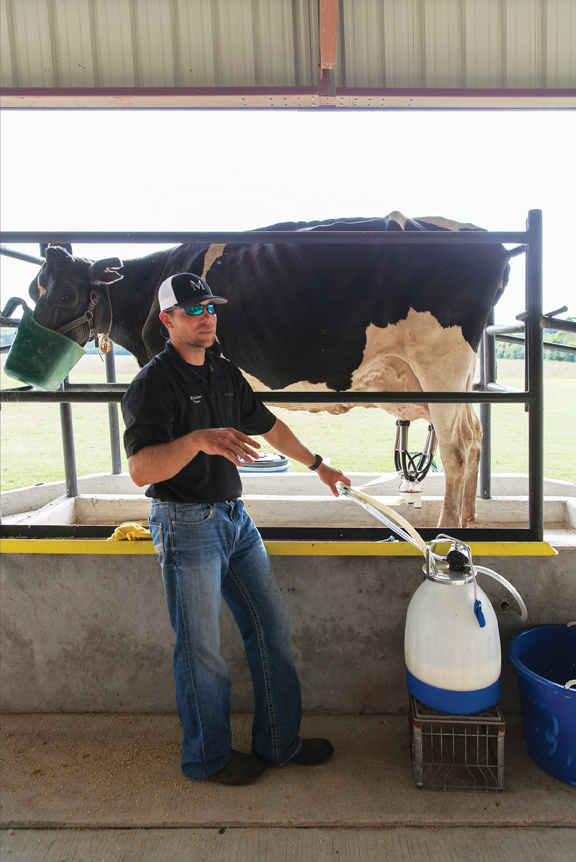 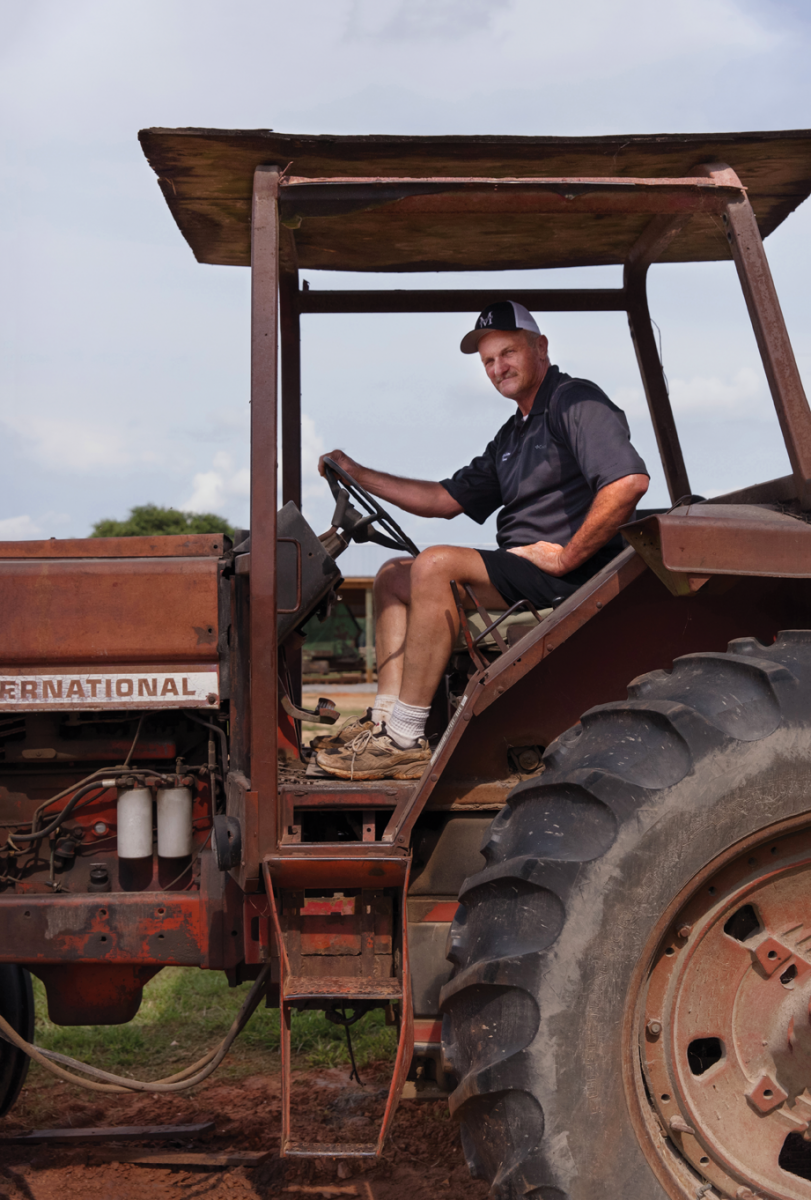 ABOVE LEFT Jeff Middleton demonstrates the milking process. This particular cow currently produces around 9 gallons of milk per day.

ABOVE RIGHT Robert Middleton links the family dairy farm’s present with its past. Here, he is shown riding his father’s old tractor. 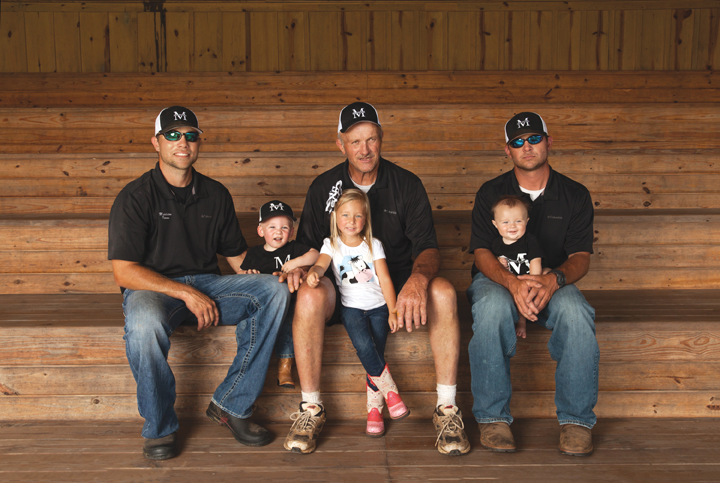 The first son I meet is Jeff. His eyes are tired and he moves like he’d rather not be moving at all. Jeff explains that today was his day to milk the cows and that, just minutes ago, he had drained the 280th udder. He had started working that morning at 1 a.m. My watch currently reads 5 p.m.

Robert himself enters the room. He’s a tall and broad man who’s quick to smile. His other son, Shane, follows him in, and the family portrait is complete. Besides sharing the farm, Robert and his sons share the same tanned skin and rough handshakes.

Responsibilities, however, are divided. While Robert oversees dairy operations, crop manager Shane makes sure the cows are fed and Jeff handles the bookkeeping.

Each family member is an essential part of the larger machine; maybe that’s the secret to their success. After all, it’s a machine that seems to be working just fine. “Since 1948, there hasn’t been a single day that a Middleton hasn’t milked a cow, ” Jeff says with pride. In other words, don’t expect a family vacation any time soon: “The odds of all of us going anywhere on vacation are slim to none, ” Jeff’s wife, April, explains. “And it never fails. When one of us goes out of town, something goes wrong.”

Dairy farming isn’t for everyone. The hours are grueling, and the work is more intensive and varied than most people realize. “One time I had a guy ask me, ‘If you didn’t run a dairy farm, what would you do? You don’t know how to do anything else.’” To which Robert responded, “Well let me tell you something. To do this, you gotta be a mechanic, you gotta be a veterinarian and you gotta be an electrician. Hey, we ain’t dummies.”

I ask Robert what he likes most about his job. “Right now, I like the going home part, ” he jokes with a drawl. “I’m 62 years old. Back when I was young like my sons it didn’t bother me much, but I feel it more now.” Robert might feel his age, but the farm doesn’t; grandchildren laugh and scamper around knees or giggle from strollers. “Future dairy farmers, ” April calls them. For the moment, the future of Middleton Farms seems secure, at least for another generation. 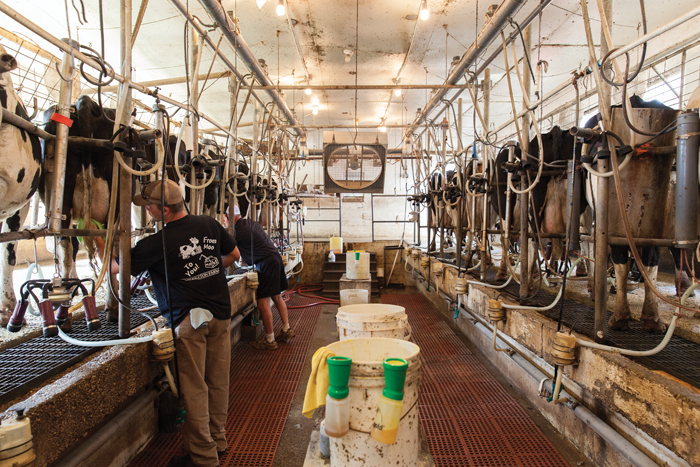 ABOVE Jeff and Robert attach milking devices to each udder in the milking barn. The farm’s 280 cows are herded into the facility 20 at a time.

In the milking barn, I notice one particularly cunning cow. Once outside, where the thrum of machinery is softened, I tell Jeff that one of his cows has learned to pull the rope over its trough, dispensing extra feed for herself. “Number 76, ” he says. “She does it every time.”

If Robert looks across the pasture and spots one of the Middletons’ 280 Holstein cows, he can rattle off that particular cow’s identification number. “If she’s been milking for four months, I can identify her. It’s just something you pick up over the years.” It’s a good skill to have, he explains, in case the rope around the cow’s neck gets caught on a nail and detaches the ID number. “It’s also good if you don’t know a cow’s number, ” Jeff says humorlessly. “Means that one’s not giving you problems.”

It’s not completely outlandish for these guys to know every cow by number. They spend a good amount of time with the animals. Each needs to be milked twice a day to prevent the pressure in its udder from becoming painful. The farmer tasked with that day’s milking starts at 1 a.m. and finishes around 5 p.m. (with a five-hour break somewhere in the middle).

Cows are milked in the barn, a modest structure on this sprawling 640-acre farm. The milker sets to work, shuffling 20 cows at a time into separate pens, 10 on each side. Unlike the old days of sitting on a stool and hand-milking into a pail, a farmer now stands in a pit running down the middle of the barn where he has easy access to all 20 cows. A suction device is attached to each teat, and fresh milk passes through a clear tube into mammoth stainless steel tanks for cooling.

Dairy farming is meticulous business. And cows are fussier than they look. It’s Jeff’s job to track each one’s milk output, which can be influenced by factors such as humidity and quality of their feed. Each month, the herd’s top performer is recognized in a framed Employee of the Month wall plaque.

As crop manager, Shane buys the feed, although most of it is grown on the property. “These cows eat better than I do, ” Robert jokes. And that’s because around Middleton Farms, cows always take preference.

“Before a hurricane comes, we’re milking up to the last minute before the danger sets in, because it might be 14 hours until we can get out there again, ” Robert says. After Hurricane Katrina, the hum of a generator hung in the air like an unwelcome mosquito, the only source of power on the farm for a week.

But these boys will be the first to tell you that, in this business, that’s just the way it is.

Before leaving the farm, I repeat my story of the cunning cow to Shane. Without a moment of hesitation, he tightens his lips, shakes his head and says, “76.” 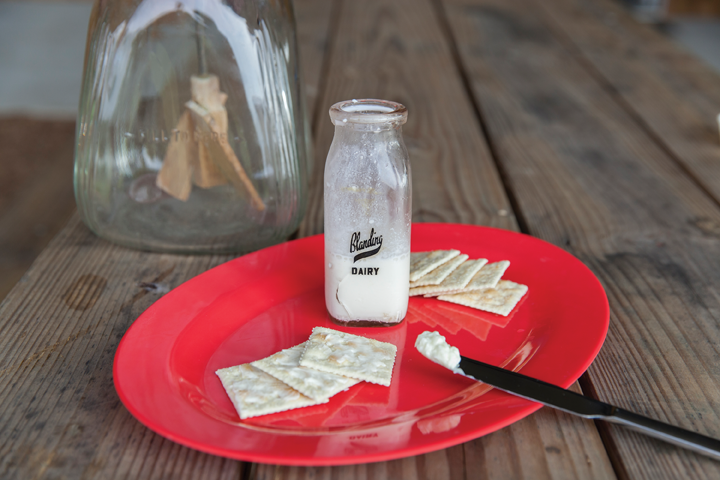 ABOVE For a kid-friendly summer project, pour heavy cream in a small plastic condiment container with a lid. Add a little salt and a marble. Close the lid, and shake the container until the cream takes on a butter-like consistency. Spread over a saltine cracker and enjoy!

In the early days of Middleton Farms, milk was loaded onto a truck at the end of a long day of milking and driven to Fairhope for processing. Today, facing a daily output of 1, 500 gallons of milk, an 18-wheeler transports the whole milk product to New Orleans every other day, where it is pasteurized and processed by Dean Foods.

Although the ultimate goal is to process milk on the farm itself, they realize that transition will be a hefty undertaking. However, as Jeff explains, they’re already taking steps in that direction. “Doing what we’re doing now, we’ll never make it long-term. To me, if you don’t have a direction you’re going in, you won’t survive.” So three years ago, the Middleton wives (Robert’s wife Becky, Jeff’s wife April and Shane’s wife Kerra) created the Middleton Farms Educational Tour. Complete with an impressive new facility onsite, the program hosts school groups from as far away as Louisiana to teach children how milk gets “from moo to you.” Kerra walks me through a series of creative booths, covering subjects like a cow’s anatomy, the farmer’s lifestyle, what a cow eats and how to churn butter. Besides teaching children how milk finds its way into the grocery store, the program is creating buzz and getting the Middleton name out to the public. “We hope this program will lead to us processing on the farm so kids can witness the operation from start to finish, ” Kerra says.

Kerra escorts me through the educational booths and points out three versions of the milking machines used over the years. Although they all operate under the same basic concept, these apparatuses are marked by time, one replaced by another as the years rolled past. Like these machines, three generations of Middletons have passed through this farm, differing in their methods but steadfast in their original mission – to provide the world with quality milk produced by a Gulf Coast cow.

And as surely as the technology will continue to evolve, you can bet there will be a Middleton there to use it.