In 1920, The Blakeley School, above and opposite, was erected on Magnolia Church Road, just north of Spanish Fort. It was built according to the state approved plan for one-room schoolhouses at that time, and the Julius T. Rosenwald Negro School Fund covered the cost of construction.

Rebecca Burke Tompkins, the daughter of a former slave in Selma, had moved to Bromley with her husband, George, at the turn of the century. Both were instrumental in the Blakeley project that would serve as a place to educate children of Bromley who had, up until then, been studying in homes in the area. (The Bromley community was centered around the lumber industry, primarily Sibley Mill.) Rebecca was a schoolteacher, and George was a bus driver of sorts, among other things. He converted an old farm truck into a vehicle to transport children to and from school; he would even cross Bromley Creek when there was no bridge. Many of the pupils who attended the first classes that fall of 1921 were the Tompkins’ relatives.

A documentary about the little red schoolhouse, directed by John Jackson, features scenes from the living history classes and interviews with many of the Tomkins’ family members, including one granddaughter, Phyllis French, who is now education director for the Exploreum.

Rebecca remained the instructor at Blakeley School until Douglasville School was opened in 1950, and she was transferred. The little red schoolhouse’s doors closed. However, Rebecca would continue to teach, eventually accruing more than 50 years of service in the Baldwin County School System.

Around 1970, a state law was passed requiring the institution of kindergarten programs, so the schoolhouse was moved to White House Fork School to accommodate the extra classes.

It remained there until 1990, when Delta School was built. Former superintendent Dr. Leslie Smith and Sam Watson, a descendant of the Tompkins, saved the place from demolition. Since then, the Little Red Schoolhouse Foundation, under the leadership of Dr. Dolores Cooper, took on the task of restoring and furnishing the historic gem. 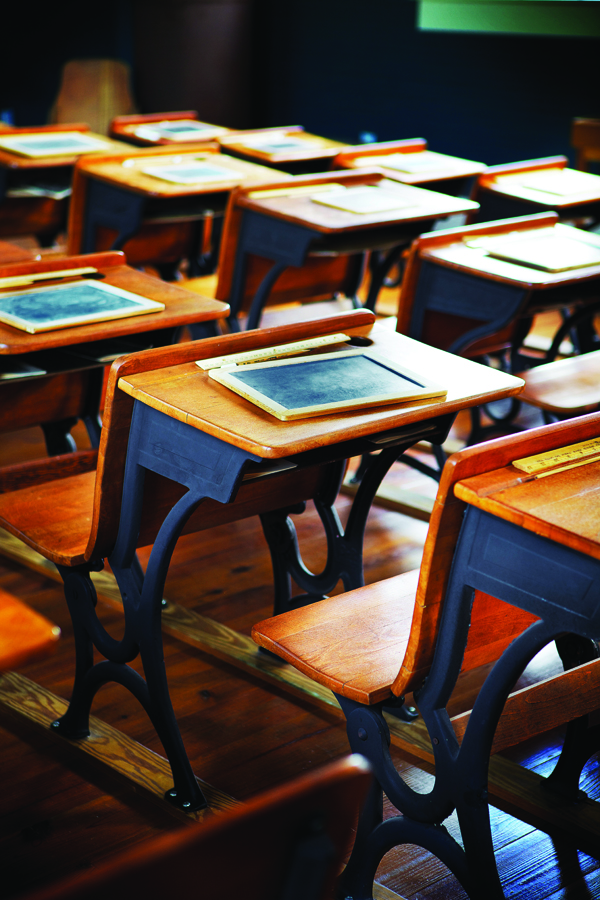 Today, what was once a place of learning is restored to its former glory as a museum. The Retired Educators of Baldwin County stocked it with authentic resources for the time period and revitalized the living history program as an educational tool for local elementary students. Until recent budget cuts, the school system was able to transport every fourth grader in the county to tour the building and experience a living history lesson; however, the project is currently on hiatus.

“We hope that funding will one day return so that students across the county can see the classroom of yesteryear where, despite the limited resources compared to today’s standards, outstanding teaching and learning took place, ” says Terry Wilhite, communications director for Baldwin County Public Schools. In the meantime, independent tours can be scheduled through the superintendent’s office.