The house is for sale today, listed on the market next to any starter home in Midtown or split-level ranch in a school zone off Rangeline Road: a charming four-bedroom, three-bathroom cottage in historic Kushla, just five minutes from Saraland businesses. Inside the front yard’s picket fence is a porch wide enough to hold two dozen rocking chairs, and around back you’ll find a kitchen and a master bathroom that have been renovated in the unmistakable style of a 1980s beachfront condo. The 17-acre property boasts a guest cottage as well as a garage, something like a dumpster combined with a treasure chest, to be sold as is.

But any plastic “for sale” sign you might expect at the foot of the tree-lined avenue is missing. Instead, a brown billboard in the grass reads “Historic Magee Farm, The Last Appomattox.” The 8-foot-by-8-foot marquee also comes with the property, though a new owner will have to decide what to do about the numbers painted across the bottom — that phone line was disconnected years ago. 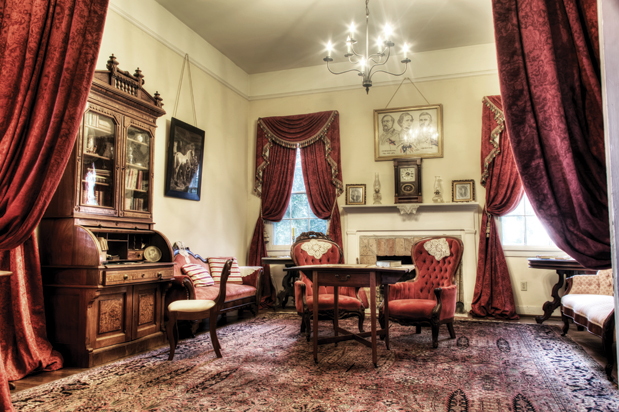 ABOVE The 1848 house’s parlor room served as the meeting place for the third and final major Civil War surrender.
Confederate Lt. Gen. Richard Taylor sat across the table from Union Gen. E.R.S. Canby and signed the truce papers.

On April 9, 1865 ­– Palm Sunday, the very day Lee and Grant shook hands in Virginia – Confederate troops were overwhelmingly outmanned along the northeastern shore of Mobile Bay at the Battle of Fort Blakely. (See Ask McGehee, page 92, for more.) When the belligerents met 20 days later to discuss surrender terms, the leaders’ arrivals were indicative of their respective situations. Confederate Lt. Gen. Richard Taylor, son of former president Zachary Taylor, and a single military aide pulled under the rail-side covering known as Kushla Station a few hours late, riding on the back of a pushcart powered by two sets of pumping, black arms. Awaiting them at the nearby farmhouse of Mobile businessman Jacob Magee was the well-rested and polished unit of Union Gen. E.R.S. Canby, nearly 2, 000 men strong. 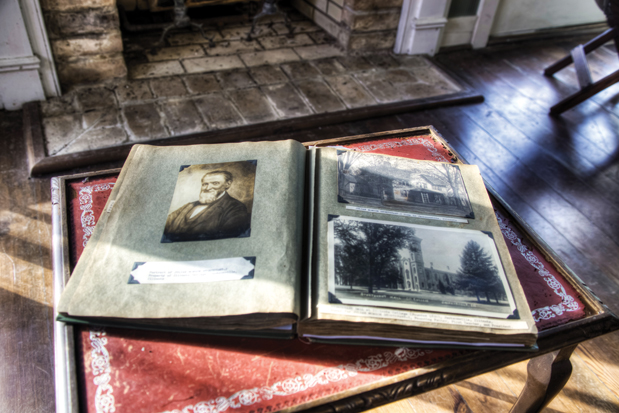 ABOVE Alfred Henry Sturtevant, a professor from Illinois seen in the photo on the left, bought the house from the Magees in 1898. His daughter married into the Magee family and moved back into the house. “We like to say the house has only ever been owned by two families, ” owner Ben George says.

Taylor strode through the enemy encampment in a tattered gray uniform and walked side by side with Canby up the steps into the front parlor room. They sat on opposite ends of a child’s foldout desk because Mrs. Magee had stowed her finest table away for fear of potential looters. (Unlike Union generals at other surrender sites, George notes, Canby was true to his word and prevented his men from vandalizing the Magee property.) Ten minutes later, the parlor’s cream-colored pocket doors were pulled open and the officers met their men in the dining room, bottles of champagne at the ready. In his book, Taylor would recount those popping corks as “the first agreeable explosive sounds I had heard for years.” The band outside started into “Hail, Columbia, ” a favorite federal anthem, but Canby sent orders for the musicians to cease and instead play “Dixie.” Taylor graciously refused the gesture, and suggested “Hail, Columbia” might be more suitable to the country’s unified future.

The two sides agreed to a 48-hour truce, which would culminate with a handing-over of arms a few days later under an ancient oak tree in nearby Citronelle. That May, close to 9, 000 Confederate troops gave up their guns at the spot, which became known as the “Surrender Oak.” According to the Citronelle Historical Preservation Society, the 1906 hurricane that devastated the Gulf Coast ripped the tree from the ground. Its wood was formed into walking canes, gavels and other souvenirs that have mostly disappeared. What is visible of the site today, however, is a glimpse into George’s deepest fears for the Magee property: nothing but a bronze marker from the local preservation society.

Magee Farm’s claim to fame is not entirely unique, hence its nickname, “The Last Appomattox, ” a spinoff of the better-known landmark. In all, there were more than 10 surrenders made in the name of the Confederate States of America, of varying sizes and locations, ranging from Virginia down to Texas. Taylor’s covenant in Kushla is recognized as the third and final surrender of “organized” Confederate forces, as he oversaw the Department of Alabama, Mississippi and East Louisiana.

But, the famous McLean farmhouse in Appomattox Court House, Va., site of the war’s foremost surrender, was looted down to its doornails, dismantled some 20 years later as part of a failed moneymaking venture to railroad the house around the country, then left to sit in slow-rotting heaps at the mercy of Mother Nature and vandals until a replica was built in the 1940s. Bennett Place, in Durham, N.C., where Union Gen. William Sherman accepted the war’s largest surrender of troops, was looted, abandoned and struck by lightning in 1921, the ensuing flames smiting the home from posterity. In the 1960s, preservationists transported a nearby cabin of the same time period to the site.

George views these replacement homes with the awe of a Buckingham Palace guard visiting the castle at Disneyland. In terms of original pieces at those properties, he says, “There are some bricks. There’s a tabletop. There’s a candlestick.”

If he sounds a bit meticulous, that likely comes with the house deed. Magee Farm still stands, and therein lies much of its significance. Generations of babies have taken their first steps on these ancient planks, glowing daughters still walk across the scuppernong vineyard to improvised altars, and young and old alike have found their final peace in the sandy soil rolled out underneath a magnolia tree in the family cemetery. The most recent headstone was carved in 2004, when homeowner Margaret Sturtevant died at the age of 93.

The furniture the rivals used — their chairs, the table they pressed pen against – lives on, collecting dust in the home’s parlor room. As George paces that room, he seems proud of what the place still has to offer. “At Appomattox, they have something just like this in the parlor, ” he says, index finger extended. “If you walked in there during a tour, I must point out, you’d be under arrest. But here, you can have a seat and get your picture taken. These are the actual chairs the generals sat in. Those are the tables. There are the couches. See that original bookcase? We’ve got the receipt for its purchase.”

Putting Up a Fight

With Sturtevant’s death in ’04, the house stood empty for the first time since her family bought the property from the Magees in 1898. Her friend and veterinarian, George, had long shared her passion for the property, helping with upkeep and bringing his children by on weekends to play. “The Confederate house, ” they called it. Shortly after Sturtevant’s funeral, George approached the family with the idea of getting the house into the hands of a preservation group. The Sturtevants consented, and George placed a call to Paul Bryant Jr., who was serving as president of the Civil War Preservation Trust at the time. 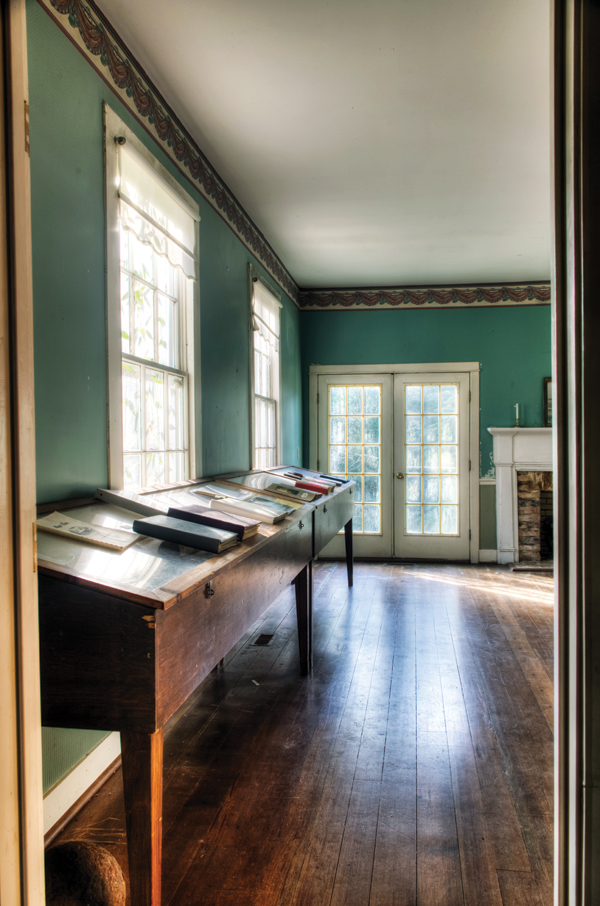 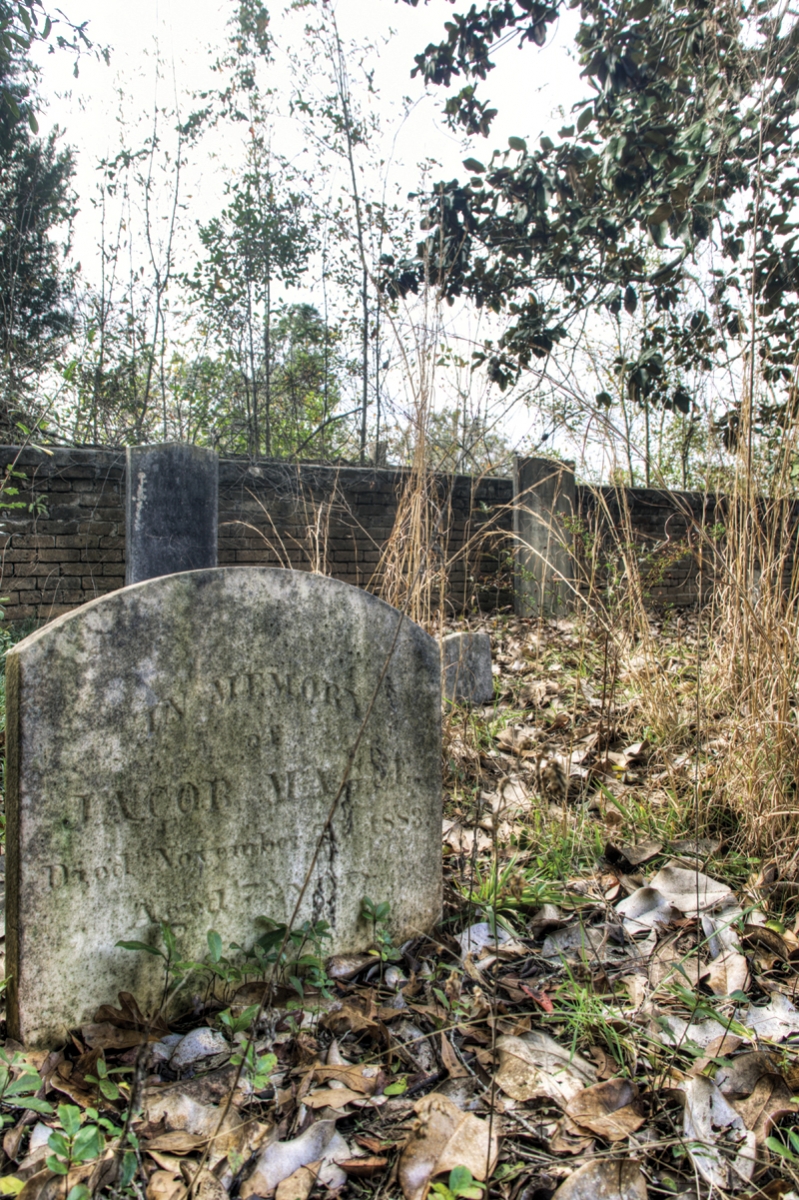 LEFT A display case left from the museum holds artifacts, pictures and documents of the property’s history. In the early 1900s, this room served as one of the first integrated schoolrooms in Lower Alabama. RIGHT The headstone of Jacob Magee, the house’s original owner who died in 1883, stands in the shaded family cemetery.

“I told him what was going on, and I’m pretty wordy, so in the middle of it he interrupted me and said he would be coming down in a couple days, ” George remembers. “I tried to make a little conversation about how best to drive in, and he chuckled. He would be flying in with his pilot and an antique expert.”

Bryant received a tour of the home and, standing next to one of the front lawn’s azalea bushes afterward, pledged to donate $300, 000 to the Civil War Preservation Trust for the purchase, “stabilization and restoration” of Magee Farm. The Trust sold the farm to George and another buyer the following year, 2005, placing detailed parameters in the deed to restrict development of the property and its structures. Soon after, the Magee Farm Preservation Trust was established on a loan from Regions Bank and some grandiose ideas: a nonprofit museum, a gift shop, full-time employees and reenactments on the weekends, to name a few.

“We told the county that if we wound up raising $100, 000 a year, we’d have a Williamsburg here, ” George says. “Not a Confederate Williamsburg, but a Williamsburg. We could make candles and things like that. Turn that grist mill again, build the general store back.”

The group operated a museum out of the house from 2007 until 2010, when the public, and finally the private, funding ran dry. The remaining board members George had recruited began to lose faith, capital or both. The Mobile County government gave what it could – setting aside $5, 000 in 2008 and ’09; offering $25, 000 in 2010 – but unprecedented budget cuts eventually stripped away the possibility of helping to preserve the house. While George believes the government was wary of supporting a structure planted obstinately beneath a Confederate flag, he concedes the stigma was not his largest problem.

“I don’t blame the county, ” he says. “I don’t blame anybody. It’s just, yet again, I don’t think we treasure our treasures here.” 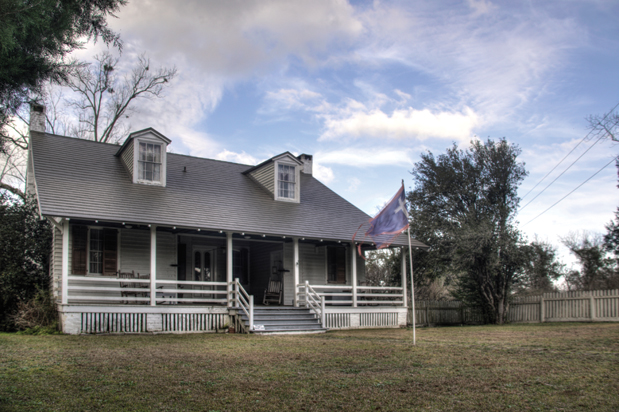 ABOVE The house sits empty after having been continuously occupied from 1848 until 2004. Magee Farm’s future is uncertain, but owner Ben George remains hopeful someone will see the importance of its preservation. “This is the perfect example of what should be treasured and saved, ” he says.

In the center of the property, a twisted and torn flag hangs lifeless. It’s the Confederate Battle Flag of Missouri, a white cross on a faded blue – not yet white – background, with red trim that has unraveled and formed its own coil down the flagpole. Walking across the yard, George grabs at the flag, gages its tangle and lets go. The man has an anecdote for nearly every doorknob in the house, every divot in its creaky floors, but when asked why the Missouri flag is flying over Kushla, he hasn’t given it much thought.

“It’s there just because we wanted something sitting up there. No particular reason, ” he says.

George is tired. The years of scraping with cash-strapped local governments and a seemingly apathetic public have finally worn a hole in the lifeboat he once extended to the Magee family farm.

“We tried, ” he says, leaning against a fence post between the house and the overgrown cemetery. “I’m ready to cross the river, and I think they’ll let me across. I’ve tried, and I’m satisfied.”