The way he tells it, Taylor Hollyer came across music almost as an accident. He doesn’t hail from a family of musicians. In fact, he was in middle school before the thought occurred to him. “I had to take an elective in sixth grade, so I chose orchestra. I picked the bass because no one else picked it, and I just wanted to be different. That’s about as glorious as it gets, ” he shares with a characteristic laugh. From that point on, he says he knew that he’d be a musician.

A Houston native, Hollyer has put quite a few pins in the map. He lived in New York for several years while obtaining his bachelor’s and master’s degrees from Juilliard. For a year, he studied film scoring in Los Angeles (“Loved the program — hated L.A.”) before heading back to New York. Then, wanting to shake things up, he made his way down to New Orleans, where word of a bass opening in the Mobile Symphony Orchestra (MSO) made its way to his ears. He took the audition, got the part and the rest is history.

Whenever he tells people he’s new to Mobile, Hollyer says they all have the same question: Why did you move here? But for him (who admits he couldn’t have found Mobile on a map before taking the audition), Mobile and the MSO sit on an equal stage with larger orchestras in New York or Atlanta. “And you don’t have to drive six hours to see it!” he says. “There are still tons of Mobilians who don’t know that we have an orchestra, much less that it’s actually a professional orchestra — we have degrees from real schools — that’s doing really high quality work for you. It’s for you!”

Since joining the orchestra in the fall of 2014, Hollyer already has a long list of favorites he’s played with MSO. “I’m a huge film music buff, and my very first season, we did an all John Williams concert, and I just nerded out the entire concert, ” he shares. But his favorite part of playing for MSO is blowing away audience members and guest musicians.

“You know, ” Hollyer begins, leaning forward, “when guest artists come, there’s this great moment in the first rehearsal every time. They come in thinking, ‘I didn’t even know Mobile had an orchestra, but they’re paying me to be here, so I’ll show up and play.’ And there’s that moment where the orchestra starts playing with them and you see this light bulb come on and they go, ‘Oh, these people can play!’”

From that moment, a guest who perhaps just thought they were playing for a paycheck becomes invested in the performance, working closely with the musicians to create a magnificent show. “There’s a difference between making and playing music, ” Hollyer says. “Some days it’s just a job, and a lot of guest artists come in assuming it’s just going to be a job. And they come out creating music with us.” 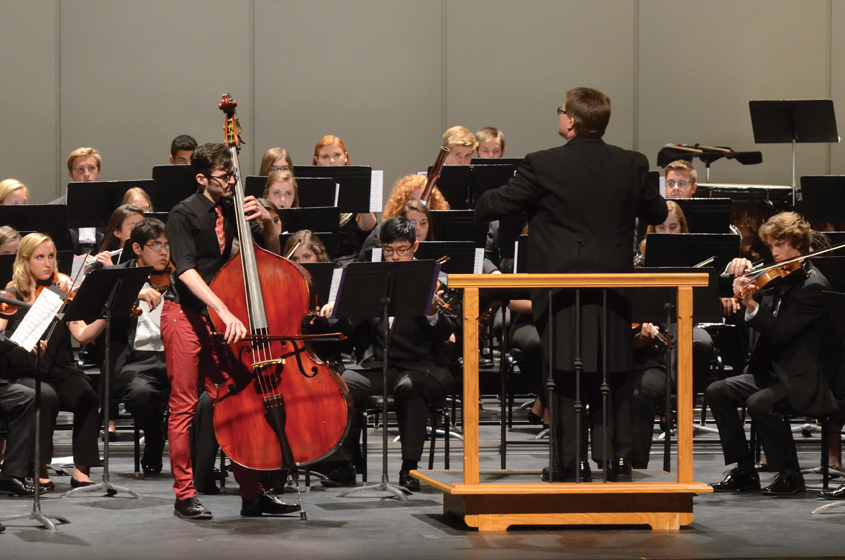 This year, the Mobile Symphony Orchestra celebrates 20 years of making music for the Port City. Thinking forward for MSO, Hollyer (who also carries out marketing development duties for the symphony) wants Mobile’s symphony to grow in accessibility and approachability. Oftentimes, as he says, people “hear the c-word: classical, ” and become intimidated. But Hollyer wants to change that. The symphony puts on a broad range of concerts. MSO Rocks has the orchestra playing hits from the Rolling Stones and other legends. Plus, there’s the aforementioned John Williams film music concert as well as the music of a Pixar performance.

Even so, Hollyer still wants people to know that it’s okay to love Bach, Brahms and Tchaikovsky, too. “I want us to showcase that music is music no matter what genre. Yes, it was written by a dead guy hundreds of years ago, but he went through interesting struggles that we can relate to.

“People think there’s pop music and then ‘that snooty stuff.’ But 11-year-old Taylor fell in love with classical music. I’ve been playing bass now for over 20 years, and I still love this music. I want them to see that it’s in the same pie. If I can fall in love with it at 11, anyone can.”