Not known as a parading society, the Athelstan Club’s members nevertheless circled Bienville Square in a stream of Chevrolet Z71 Tahoes as the Tuesday sun was setting. It was draft night for the inaugural Eddie Greene Memorial Tournament. The air had a hairy dampness to it, like the backs of the players who would soon be sweating in the club’s second-level gym. For now, on the top floor, eight team captains talked strategy with their confidants and trash to each other. Grown men giggled nervously.

The night’s commissioner and emcee, Craig Hamilton, began the evening with some golf course humor before paying respects to the Greene family. Smith Prestwood, tournament organizer, took to the podium to explain the rules and (strictly hypothetical) wagering protocol. With the draft finally underway, Hamilton’s face took on the glazed, “where did it all go wrong?” look of a hitchhiker. “Oh, my God. That, gentlemen, is the worst pick I’ve ever heard in my life. Ever, ” he said, twice in the first round. When other picks were announced, he simply buried his face in his hands and shook his head.

While one club member took on the responsibility of ensuring the Commish’s speaking voice was well lubricated, the draft-turned-roast carried on into the night, until eight teams of four members were determined. Each side took on the name, and the identity, of its captain: Team Atchison, Team Baker, Team Foose,  Team Fuquay, Team Liles, Team McAleer, Team McRee and Team Watkins.

These games must have been what James Naismith could only dream of when his genius birthed the sport some 120 years ago. No referees or game clock – not that one is needed when games are decided by the “first to 12” formula. Twelve baskets, that is, which in retrospect showed a touch of hubris, causing competition to run well past some players’ bedtimes. The system also created an incident in which the scorekeeper lost track of points, and an apparently polydactyl member offered to keep count on his fingers.

As one club member, who could be described as stocky, drove the lane, an onlooker smiled and shook his head from the sideline. “Guy’s got great fundamentals, ” he noted. “You have to when you’re 5 foot 6.”

When heavily-favored Team Baker – led by Stephen Baker, a former St. Paul’s point guard who looks more like MSNBC’s Chris Matthews than the NBA’s Chris Paul – bowed out of the double-elimination tournament after consecutive blowouts, grumblings of a fix began before Sharpie had even touched bracket. As usual, the most vocal discontents were those with (strictly hypothetical) money at risk.

Competitors largely kept their senses despite the tension, save for one post-game scuffle that spilled into the locker room after an especially questionable call. The heated exchange cooled quickly thanks to the soothing sounds of Fleetwood Mac’s “Landslide” seeping in from the overhead speakers.

Late Thursday night, the outcome was decided when Team Foose captain Curran Foose mercifully launched a ballistic dagger for his team’s twelfth basket, and what felt like his 200th point of the tournament. 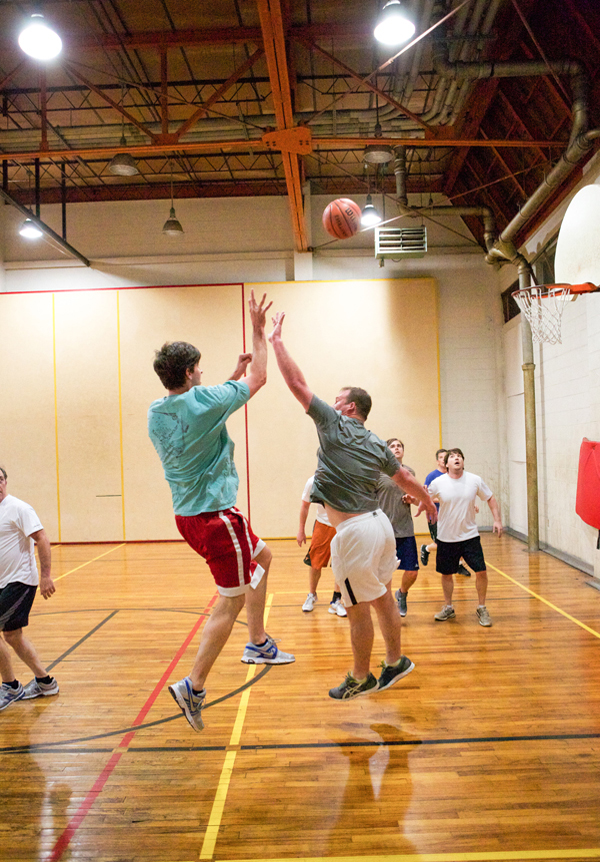 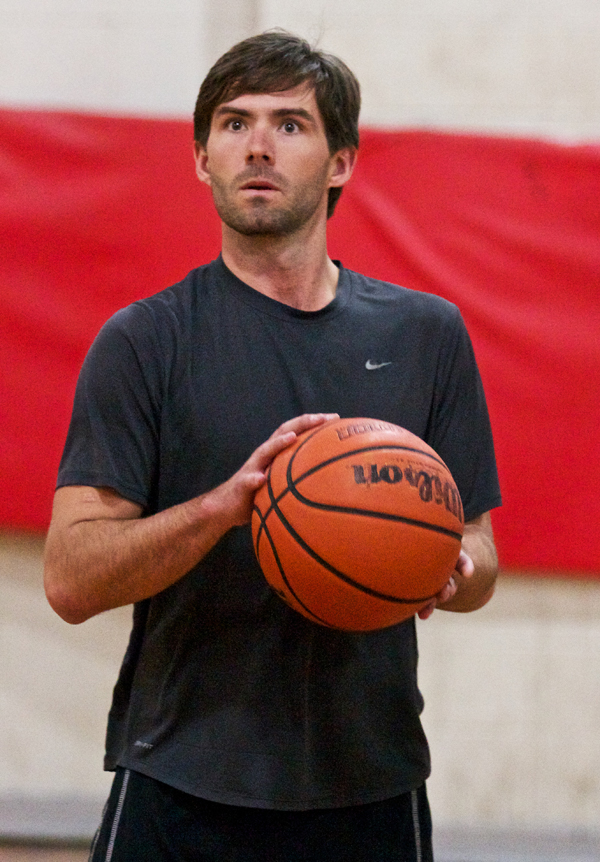 ABOVE LEFT While the games had none of the acrobatics or agility you might see televised, plenty of raw athleticism was on display, along with skills and shooting form that you can’t – or shouldn’t – teach. In addition to this example, the tourney also featured many two-handed jumpers, a rarity most experts believed dead with Dolph Schayes’ retirement in 1964.

ABOVE RIGHT If stares could sink baskets, perhaps Team Atchison captain Taylor Atchison could have taken his team further than the two-game minimum. 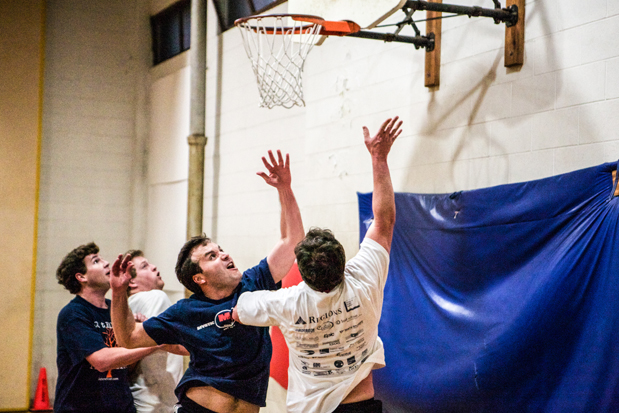 ABOVE Even the high fives were dramatic on the Athelstan Club court. Sweat stains grew long on players’ jerseys – often Callaghan’s shirts or decade-old fraternity tees – as if the fluorescent lighting was a high noon sun. 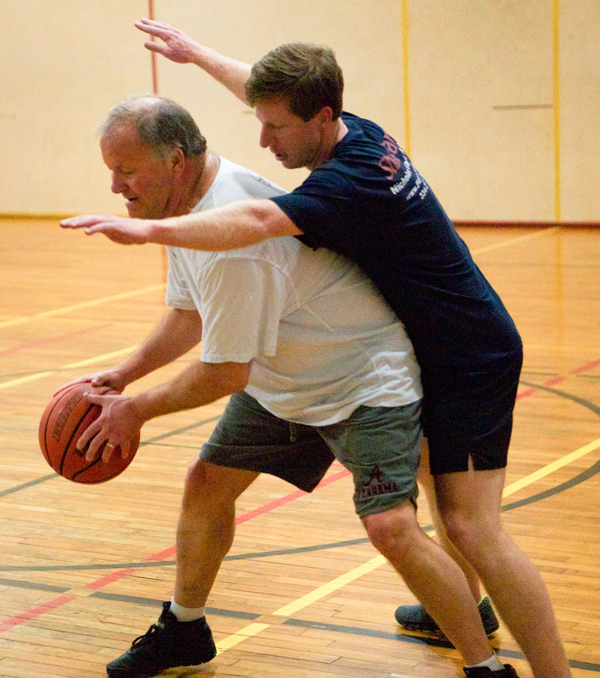 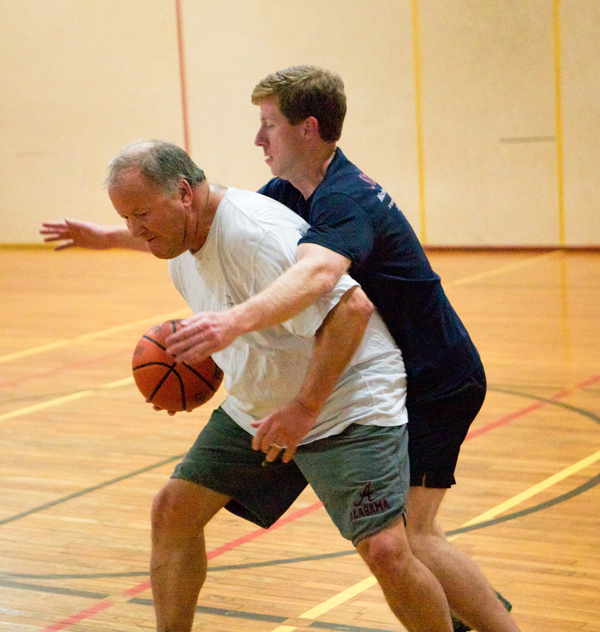 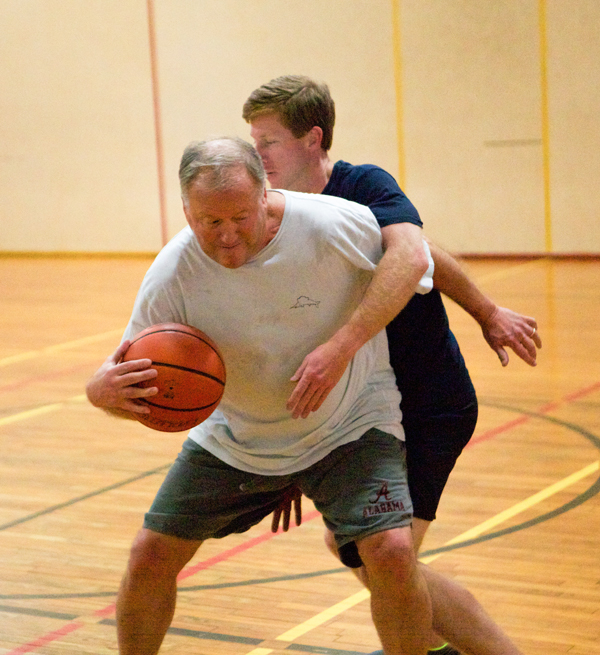 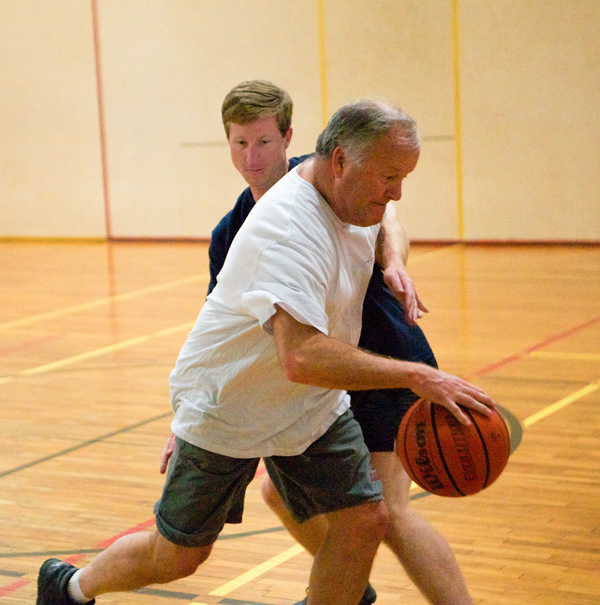 ABOVE There exists a style of basketball which, when executed properly, can compensate for all but the most overwhelming mismatches in athleticism. Known only by an experienced few, this version of the game has been branded – by others before me – “old-man basketball.” Old-man game has been known to create Jordan out of Joe Schmo and the Mailman from the muffin man. One proponent of the style, Jeff Luther, is seen here deploying his patented “Luther Arm Hook” to maneuver around a helpless young defender, who counters with a TSA-style rubdown. Thanks to a deadly sky hook (another classic from the veterans’ handbook), Luther finished Team Fuquay’s semifinal game with an impressive stat line of 4 points, 3 rebounds and 1 assist, all without rising more than three inches off the hardwood. 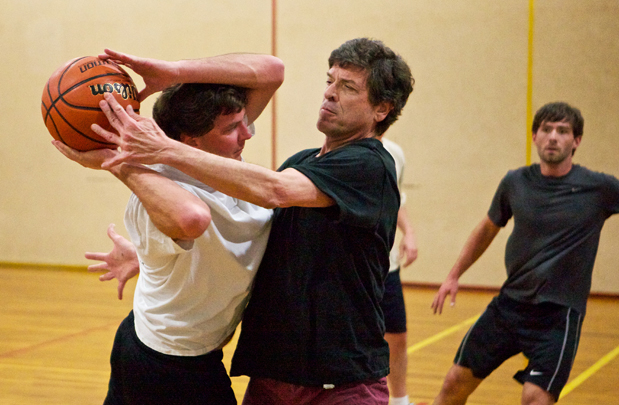 ABOVE Club member Jimmy Duffy showed his determination by playing the tournament through squinted eyes. After each game, he returned to the locker room to locate his glasses. 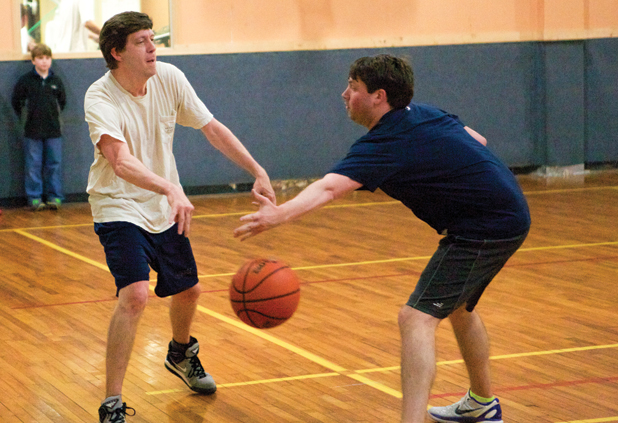 ABOVE “The crooked rim giveth, and the crooked rim taketh away.” Richard Fuquay, wily captain of Team Fuquay, is notorious for harnessing the favor of the south goal’s askew iron. He was unavailable for comment regarding what is being attempted in this photo. 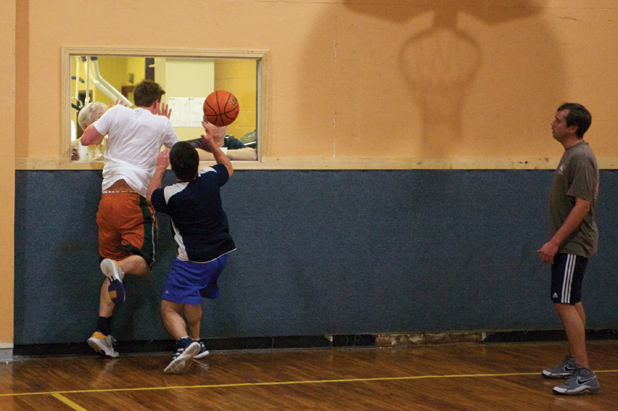 ABOVE Rarely did a layup float into the air without the loud slapping of hands against the shooter’s arm. Those smacks were typically followed by bodies crashing into the walls under the baskets, like hockey checks. 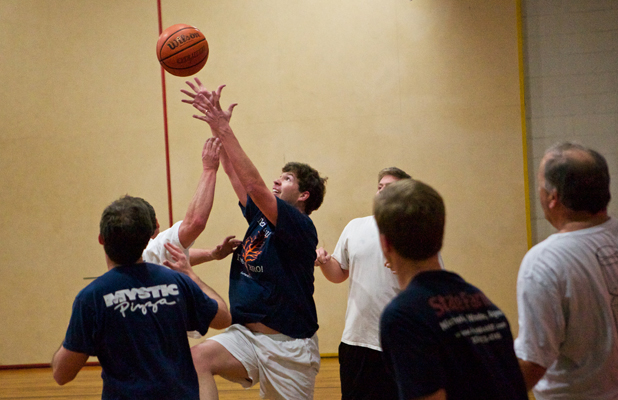 ABOVE We haven’t yet decided if this picture captures a shot or a rebound. 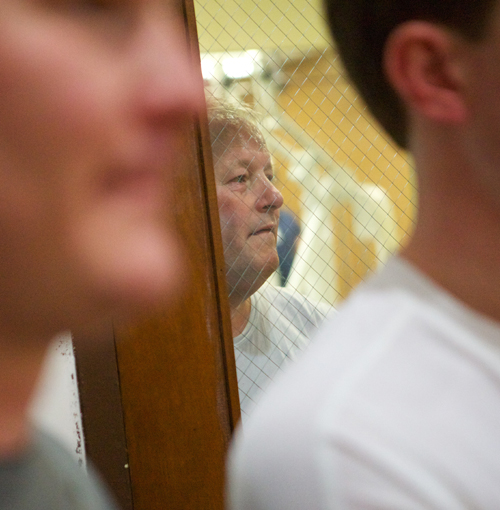 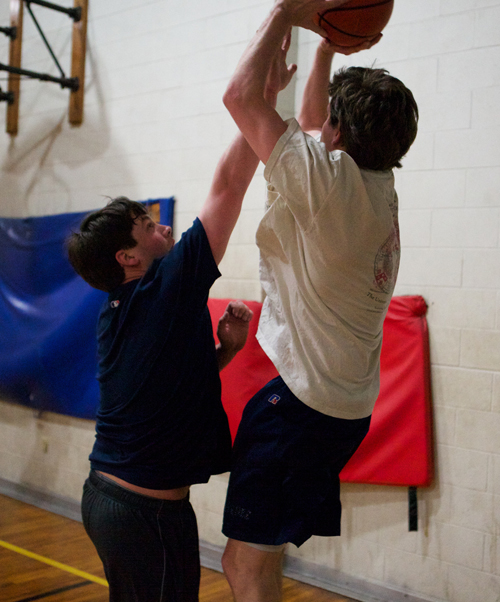 ABOVE LEFT Jeff Luther scouts the competition, looking for his next victim.

ABOVE RIGHT “There’s three things you can count on in life, ” says Richard Fuquay, pictured here, shooting. “Death, taxes and Richard from the baseline.” 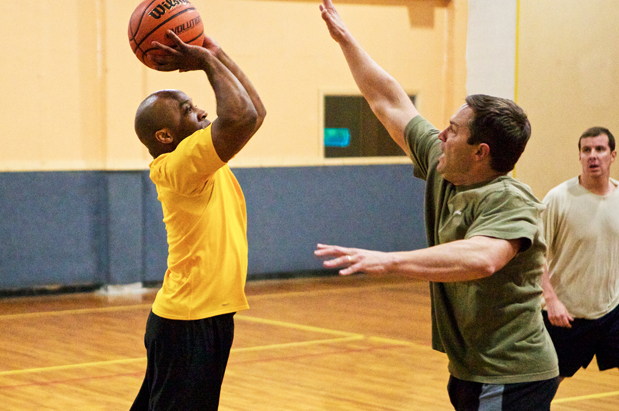 ABOVE Ricardo Woods shows off the shooting style that helped his team to an early exit. 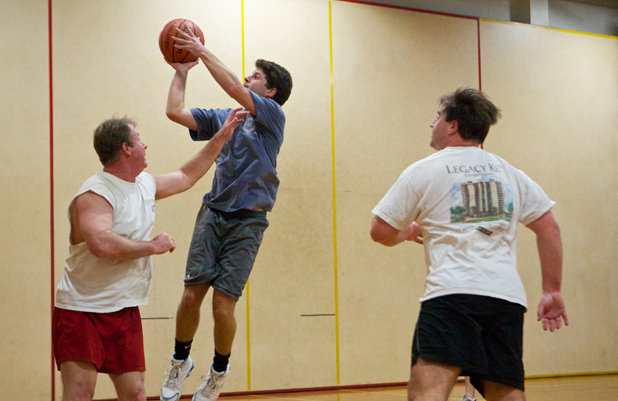 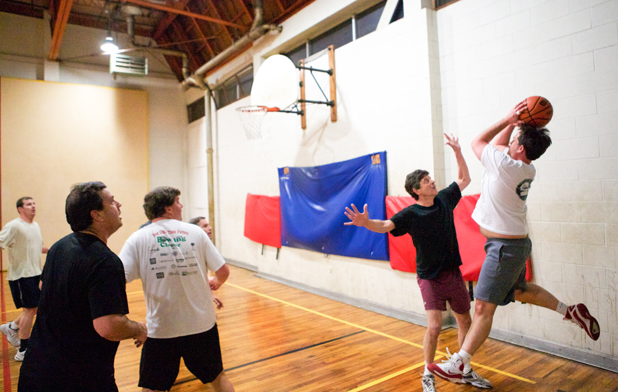 ABOVE Jay Watkins likes to combine ballet and basketball in an attempt to confuse defenders.