Reviewing Lynda Smith Touart’s extensive “Selected Exhibitions” list sparks one of those moments. “Where does the time go?” I wonder. I had not realized that nearly a decade had lapsed since I first was captivated by the native Mobilian’s work: some 50 pieces filling the Eastern Shore Art Center’s main gallery. Vibrant acrylic paintings shared wall space with stark pen-and-ink drawings. A seemingly odd mix, until its underlying impetus is explained.

From Acrylics to Pen and Ink

Before she discovered that covered palettes would extend her acrylics’ drying time, Touart found painting in spurts prohibitively expensive. Her fondness for fine detail, rendered in a stipple technique utilizing tiny brushes, further exacerbated her need for large, uninterrupted blocks of studio time. Plus, a work schedule that included a twice daily commute across the Bay frequently precluded painting.

Touart began drawing to satiate her artistic urge. She used a Rapidograph technical pen, black ink and white paper to create images composed entirely of tiny dots, and she continues the same technique with the same equipment today. Their illusory tonal range is based on the density or sparsity of those dots. Dark areas must be filled in dot by dot – which can be done whenever she has a few minutes to spare. She settled comfortably into painting as time allowed and drawing when she couldn’t paint. Then, on her return to painting, Touart began working with highly diluted acrylics on paper, building color density slowly, layer by layer.

On to Colored Pencil

No matter her media, Touart addresses a wide range of subjects. All are filtered through her well-defined, quirky way of interpreting the world around her. A fine example is the color drawing, “Zinnias, ” below, that she submitted for the Watercolor and Graphic Arts Society’s January exhibit. 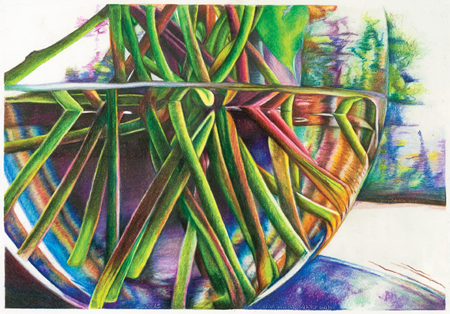 “Everybody’s got paintings or drawings of zinnias. This is a different way of looking at them, ” she explains. “There are no flower heads. It’s all the stems and the reflections in a clear vase with water. Reflections and refraction of light are my main areas of interest.” Her medium of choice was wax-based color pencil.

“Colored pencil is similar to acrylic painting because I do really thin layers. I can gradually change the color, which gives it a deep richness. For example, ” she continues, pointing to “Cacti O Myyy, ” below. “I found that in colored pencil when I want black, I don’t just make it black. I use indigo blue and Tuscan red and probably a dark green. Then black.”

Adjacent to the drawing’s black background area is what looks like thousands of individual white cactus spines. Imagining all of the meticulous, tedious, repetitive pencil strokes behind them, I respond, “The one place that could have been simple, you make complicated.”

I’m wrong about the spines anyway. Touart rarely draws anything white. “I deboss with the pen before I do the colored pencil. Those areas are then left blank.”

Touart places a piece of thin tracing paper atop the much thicker Stonehenge paper she uses for pencil drawings. Marks made on the top sheet produce corresponding indentations in the bottom sheet.

“When I lightly come back in with colored pencil, it doesn’t go into the indentions. I get a void, ” she continues. “So those spines aren’t actually drawn on the paper.”

Production time for such drawings is comparable to the time she would spend doing the same subject in acrylics; she rarely completes one in less than a month.

Touart generally works from photos — although the final piece often bears little resemblance to any single picture she shoots. She’ll take photographs that illustrate an idea, then decide what media it should be.

In a colored pencil drawing, she says that “the lines come first and I draw them really light, so I don’t get confused about where I am. Usually I try to use whatever color it’s going to be in the end, if I know. Then I come back with whatever’s behind. With colored pencil, you can’t erase it, and unless you’re going really dark, you can’t cover it. So you do have to be really careful about how you proceed, ” she continues. “With acrylic, if I got in trouble, I could change it more easily. The colors I use are very thin, so I would go over it with white first, and then come back with color as if painting on blank paper.” 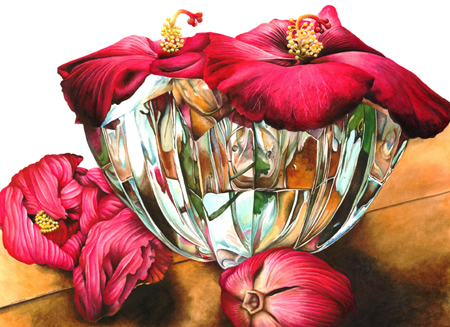 So then, why change media? “Every once in a while you really need to shake yourself up a little. I’m so wedded to the way I work, the way I think, that it’s really hard for me to do that, ” she responds. “In school, one of my instructors, Linda Schele, tried to turn me to abstract expressionism.  It didn’t stick. Still, I got a lot of insight from the experiment. It allowed me to think about the abstract elements of a painting or drawing more than I would have had I started with realism and stayed with it. Changing media has been like that too.” Above, “Was Hibiscus.”

I respond that she may have added a new set of tools, but it doesn’t seem to have altered the way she sees and interprets her subjects. “No, ” she smiles. “It’s still me in there.”