With a commanding “Quiet on the movie set! Cameras rolling, ” all eyes are on Mobile’s Al Stokes.

In real life, he is Chief of Staff to Mayor Sam Jones. In make-believe, Stokes is a pretend mayor, rehearsing his film role in “Tokarev, ” shooting in Mobile. “Sorry, I flubbed my line, ” Stokes apologizes to another actor. “Don’t worry; we all do. You will be great, ” replies Nicolas Cage.

Another take and Stokes performs flawlessly. Another scene is in the can, another show makes cinematic history and another movie’s scrolling credits proclaim “filmed in Mobile.”

For decades, the Azalea City has hosted Hollywood’s biggest names. Locals have rubbed elbows with superstars and witnessed a Bay-area economy enriched with Tinseltown dollars. We’ve learned there’s no business like show business – and it all started with a close encounter.

In 1976, 30-year-old filmmaker Steven Spielberg, right, chose Mobile and Baldwin counties for his epic sci-fi, “Close Encounters of the Third Kind.”
“He loved Mobile, ” Eva Golson, director of the Mobile Film Office, remembers about the movie magnate. “Spielberg wanted Brookley Field for the ‘mother ship’ scene. Nowhere else in the country would work for him. That’s why he came here.” In a 1970s press release, Columbia Pictures called Brookley Field’s cavernous Hangar 17, left, “the largest and most unique set ever constructed for a motion picture.”

Many mid-70s South Alabama residents were either in “Close Encounters” or knew someone who was. On Dec. 29, 1977, the show premiered at Mobile’s Capri Theater, and a whopping 9, 148 people tried to buy tickets. More than 7, 000 attended a Mobile anniversary screening – 25 years later.

Hollywood and Mobile had fallen in love. But most important, our “show must go on” attitude was noticed by studio execs, producers and heavy hitters. “I’ve made movies all over the world, ” said actor Martin Landau, in a media conference, promoting 1991’s “Firehead.” “And I’ve found in Mobile it is easier to get things done …  because the people are so easy to work with.”

“The entertainment industry is close knit, ” Golson notes. “Movie people talk to each other about which locations work well, what can be expected.” When the world saw the success of “Close Encounters, ” filmed in — of all places — Alabama, Hollywood took notice.

Filmmakers are attracted to our diversity. What other region offers a battleship, delta, downtown bars, state docks, rural pastures, cityscape, woodland forests, Confederate forts and Gulf waters, all within 60 miles?

“You have everything right here, ” adds Drew Hall, independent film director and producer with Mobile’s Mudbrick Media. “The people and the Mobile Film Office will do everything they can to help you succeed. The city offers excellent locations and incentives.”

“Incentives” is the key word. In the early days, Hollywood agents scouted Alabama coastal settings, shook hands with a mayor and reported back to California. Six months later, Sally Field would be pulling into the Grand Hotel. Those were the good ole days: the Bay area – Tinseltown  golden years.

Today, it takes more than goodwill, good locations and good workers. You need good money. Producers want incentives, such as our 25 percent tax credit for expenditures and 35 percent rebate for wages paid to Alabama residents. Recently, Gov. Robert Bentley signed a bill to allow the state to raise the cap for these incentives from $10 million to $20 million by 2015, which will allow Alabama to more effectively compete for film production. “We all are fascinated by the glamour, but this is an industry, ” Golsonw notes. “It is a big business, with million-dollar budgets, payrolls and hundreds of employees.” A big film will add more money into Mobile’s economy in four months than some permanent businesses do in a year.

But after the ka-ching, comes the bling. Roll out the red carpet; it’s time for movie stars to meet Mobile. 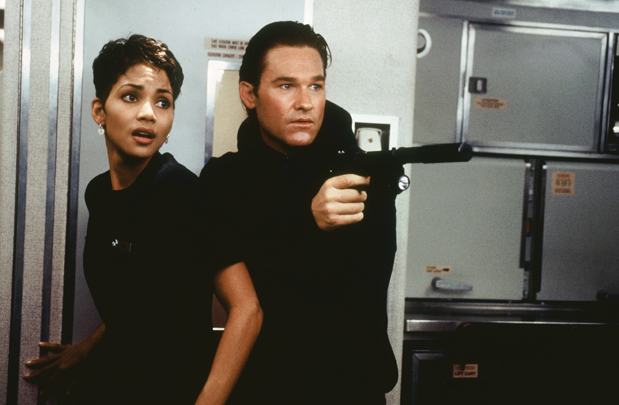 After Halle Berry shot the film “Executive Decision” in Mobile in 1996, starring opposite Kurt Russell, rumors became rampant that the Academy Award-winning starlet loved the Bay area so much that she purchased a home in Baldwin County.

“In my experience, movie stars are pretty much like the rest of us, ” Golson says. “Most are really great people, but stardom forces them to live in a different world.” She says that actors sometimes appear standoffish, but if Al Pacino were to walk into the BlueGill Restaurant, he would shut it down. Golson adds, “Most of the time, our visiting stars just work and keep to their hotel rooms.” There are exceptions.

During our film history, many personal accounts of everyday citizens meeting big-name actors filming here have made news. Here, find locals’ on- and off-camera recollections:

1976 During a “Close Encounters” night shoot, someone excitedly ran on set reporting rumors of flying saucers hovering over Mobile. Production halted. Spielberg, Richard Dreyfus, and cast members ran into Brookley Field’s parking lot, gazing skyward in search of extraterrestrials, only to have close encounters with mosquitoes.

1980 While filming in Mobile and Daphne, “Back Roads” stars Sally Field and Tommy Lee Jones were such professionals, few of us knew how much the two reportedly hated each other. Their mutual animosity never showed on film. Field, famous for portraying “The Flying Nun, ” played a hooker in “Back Roads”  – about as versatile as an actress can get. During her Baldwin County filming stay, she was spotted buying her own groceries in Eastern Shore supermarkets.

1988 “Friday the 13th, Part VII: The New Blood” was produced in areas of rural Baldwin. The movie portrays the story of a deranged killer, ruthless murderer, dangerous psychopath who succumbs to nothing – except Stockton alligators. The onsite crew was so concerned about gator attacks that they kept an armed gator wrangler on location while filming the movie’s swamp scenes.

1992 While “Under Siege” was shot, actor Steven Segal rented a Fairhope house for four months. To make it “comfortable, ” he bought out a Mobile antique store, completely refurnishing his eight-room rental with the purchases. At the end of filming, Segal had the new – and expensive – furnishings delivered to his California home via 18-wheeler. The real star of “Under Siege” was the USS Alabama battleship where riveting scenes, such as terrorist attacks, kidnappings and a Playboy centerfold jumping from a cake, took place. Since the movie setting is a hijacked battleship in the middle of the Pacific Ocean, “blackout” barges were strategically placed in the Bay to conceal Causeway traffic and block the city skyline.

1998 During his stay in the Port City,   tough guy actor Al Pacino visited a fan with leukemia. He also invited her on set for shooting of “The Insider.” “I hear you’ve been watching my movies, ” Pacino smiled, to a delighted Veronica Stiger.

2013 This summer, Nicolas Cage enjoyed sitting poolside at the Battle House Hotel, running his “Tokarev” lines with his assistants. They were so believable, in fact, some hotel guests thought the performers were in a true heated argument. While here, Cage was also a visitor to Daphne’s Fresh Market. 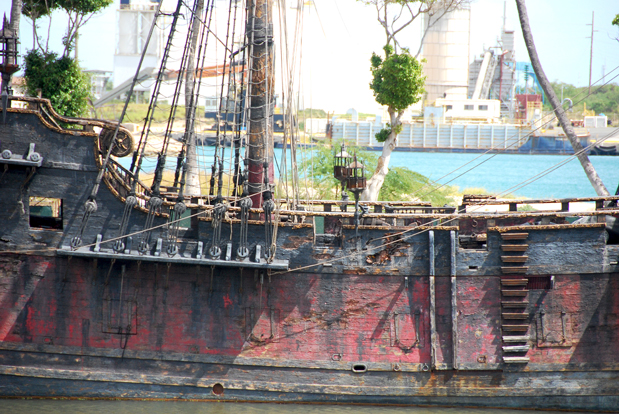 In 2005, The Black Pearl from the “Pirates of the Caribbean” franchise, was secretly built atop a 96-foot-long steel utility boat at Bayou La Batre’s Steiner Shipyard.

While the actors get all the glory, the crews make the behind-the-scenes  magic happen. “These people are the most hardworking folks you will ever meet, ” Golson says. Their repertoires are endless. They can build a working pirate ship (The Black Pearl for “Pirates of the Caribbean: Curse of the Black Pearl” was constructed in Bayou La Batre), create the illusion of spacecraft soaring through Bankhead Tunnel (“Close Encounters”), or choreograph a gunfight chase scene on top of the old Gayfers building (“Tokarev”).

And finally, there are the extras, bit players, people just like you, because they are you. People like Chickasaw’s Bill Evers. “I first heard about ‘Close Encounters of the Third Kind’ through a help-wanted newspaper ad, ” Evers recalls. “Columbia Pictures wanted young men with short haircuts and military background.” He won the role. Near the movie’s end, Evers appears as one of the astronauts walking with actor Richard Dreyfus to board the mother ship. “That spaceship was so bright, ” he recalls. “It was covered with 100-watt bulbs so it hurt your eyes to look at it. In the film, we wear sunglasses. They’re not just a prop; they’re protection.”

Evers and other local actors worked on the film for months. “We got to know each other well, ” he remembers. “I played cards with Richard Dreyfus.”

But mostly it was work. Evers recalls, “In one scene in the movie, a plate glass is blown from a building, after the alien spacecraft releases the famous ‘five notes’ communication with earth people. Spielberg must’ve reshot that part at least a dozen times. Each take required a new sugar-glass pane.”

It’s all in a day’s work, but our cinematic  history proves we know how to roll camera. And that’s  a wrap.

Want to read about Emmett Burnett's experience as an extra? Click here to read “Seen But Not Heard, ” a day in the life of a “Tokarev” extra. 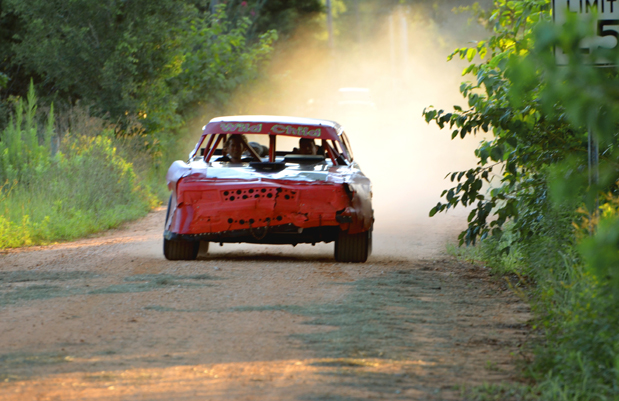 The 5th-annual regional cinematic event promotes Southern filmmakers who pay homage to what makes this area so unique. In addition to showing both feature-length and short films, SoAL Film Fest will offer seminars and workshops for adults and school children, to further its goal of educating – as well as enchanting – the growing regional film community. For the first time, this year’s festival will also feature a music video category. Venues will include the Ben May Main Library’s Bernheim Hall, the Crescent Theater, Space 301 and Cathedral Square. Be sure to catch the free outdoor screening of “Close Encounters of the Third Kind, ” as well as “Who Are You People?” This documentary explores the making of the sci-fi film, as told by local Mobilians. Visit the SoAL Facebook page or website for the rest of the lineup and detailed schedules of showings. 490-4356.