Mount Rushmore and Mobile have many commonalities. Both begin with ‘M’ and … OK, that’s about it. But what if we had Rushmore in Mobile? The one in South Dakota is 5,700 feet high. Mobile is 10 feet above sea level. Come up with another 5,690 feet and we’re there. Now for the hard part. Who would be on it?

We posed the same question to this year’s pool of 40 Under 40 honorees, and from a summit of candidates, four reached new heights, not to be taken for “granite.”

For heaven’s sake, Joe Cain revived Mardi Gras. Need we say more? No, we do not, but yes, we will.

Cain is known for being a rebel-rousing free spirit. His impromptu parade with makeshift floats, improvised costumes and interpretive dances was the forerunner of our city’s Carnival, arguably Mobile’s signature event. But he did much more. Cain’s march through Mobile told the world that the Port City has a right to be.

Fed up with the Civil War’s aftermath and Reconstruction, on Mardi Gras Day 1867, Cain dressed in the attire of the Chickasaw tribe and created his alter ego, Chief Slacabamarinico. He led a defiant band of eight noise-making accomplices through Downtown, parading in front of astonished Union soldiers.

From that day on, “Let the good times roll” has been shouted from Mobile’s mountaintops. Thank you, Joe Cain!

In our poll, Henry “Hammerin’ Hank” Aaron knocked it out of the park — just as he did on April 8, 1974. For on that spring evening in Georgia, the Mobile native and Atlanta Braves slugger hit home run No. 715, one-upping previous record holder, Babe Ruth. Millions stopped what they were doing as NBC broadcasted the history-making ball game.

As a youngster, Aaron attended Mobile’s Central High School. In those days, it did not have organized baseball, which is regrettable. Had Central formed a team with teenage Hank Aaron on the roster, we’re pretty sure they would have made the playoffs.

Mobile’s French founder deserves a place on our mount for many reasons, one being his name. The lengthy etching of the name spanning the mountain summit could easily double as an airplane runway. But Bienville is also one of the coolest city fathers ever to grace our very real shores and make-believe mountain.

His hair was shoulder-length and sometimes longer. But his most striking features were the tattoos of snakes covering his body, almost from toes to nose.

Bienville did his homework, discovering snakes and snake art were held in high esteem by indigenous tribes. To make himself acceptable, our founder inked his body with serpent art. Meeting tribal elders, the explorer stripped down to his pre-Fruit of the Loom-era loincloth, revealing tattoos and who knows what else.

But his body art worked. In the early 1700s, Bienville colonized a settlement that would later become Mobile.

Who else deserves a place on the mountain more than a man who has scaled great heights? Jimmy Buffett has topped in music, writing and good deeds. So it’s no surprise that the son of a son of a sailor man is a favorite son of Mobile.

Buffett is a country-rock-ballad legend, recording dozens of hits on more than seven labels. He has also written three New York Times bestsellers and two children’s books. In addition, the leader of the band is a restaurateur, with 42 eateries in four countries. The Commander-in-Parrot Head’s charity work includes Save the Manatee, the Gulf Specimen Marine Laboratory and other worthy causes.

Though born in Pascagoula, Buffett was raised in Mobile and Fairhope. While attending Mobile’s St. Ignatius Catholic School, he was introduced to the trombone. Fortunately, he switched to guitar, because a trombone rendition of “Margaritaville” would make a good reason for wasting away over a cold one. 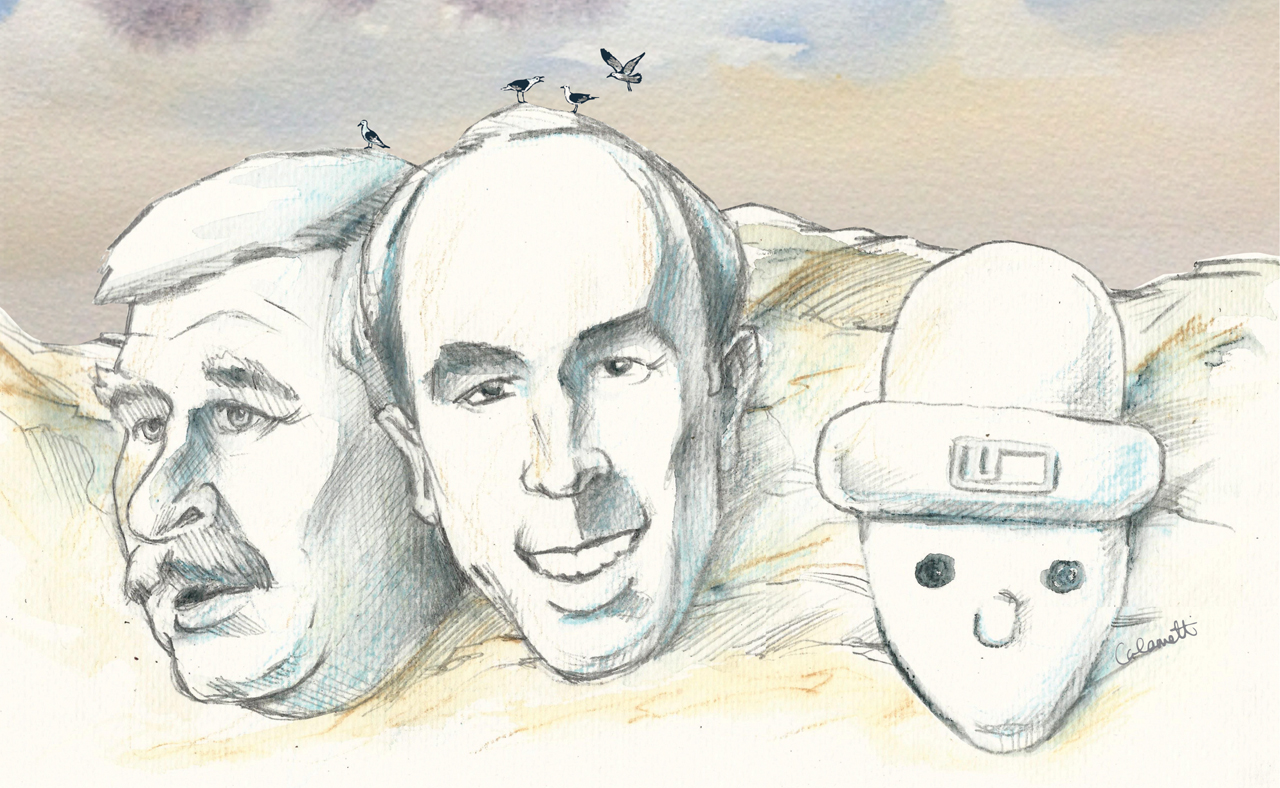 Alternates in case of rockslides include two Mobile mayors, past and present. Mike Dow served four terms (1989 – 2005), leaving a legacy in his “String of Pearls,” which served as a catalyst in the revitalization of Downtown. Common Mobile landmarks of today resulted from Dow back in the day. Mobile Government Plaza (the first in the country to house county and city government under one roof), the RSA Battle House Tower, the Mobile Convention Center and Mardi Gras Plaza are but a few of the mountainous accomplishments from Dow, either in part of or whole.

Re-elected to a second term, current Mayor Stimpson is committed to “One Mobile,” empowering every Mobilian to be heard in a united city. His mission is for “Mobile to become the safest, most business- and family-friendly city in America by 2020.”

To the fab four and two alternates (and one incredibly lucky write-in candidate, the Crichton Leprechaun), welcome to the mountaintop. Your chiseled faces are on an imaginary monolith, and your deeds are certainly set in stone.