Spence Harrison has an eye for eagles. The avid wildlife photographer has been observing and capturing images of a local pair of Haliaeetus leucocephalus (or bald eagles) for more than four years. For each encounter,  Harrison loads up his equipment into a slender, stealth yellow kayak that allows him to meander the shallow Delta waters to the remote area that these birds call home. Once in range, Harrison, always careful not to disturb the natural habitat, quietly peers toward his subjects through a lengthy, robust telephoto lens resembling an antique spyglass. With a click of the shutter, he documents the extraordinary life cycles of the Delta’s most stately creatures. The following images depict key moments from his longtime study. 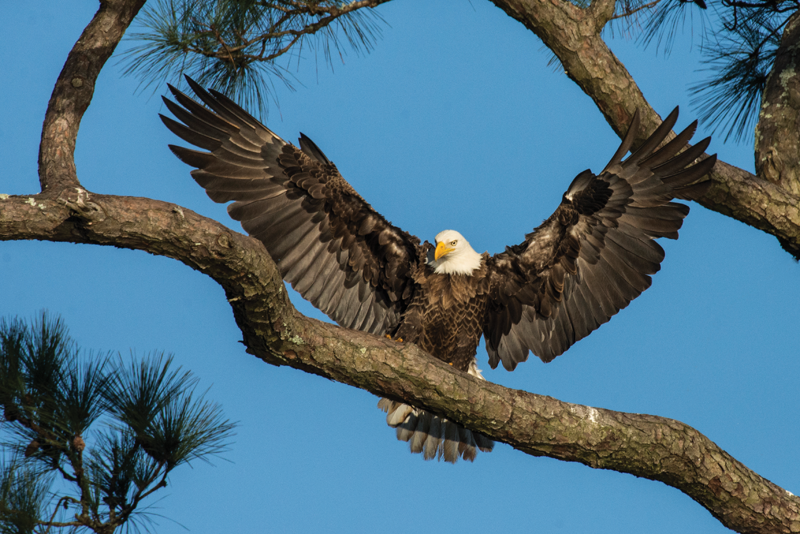 ABOVE Harrison says that there are actually more bald eagles locally than most people realize. Often, ospreys are mistaken as eagles because of the white markings on their heads. An eagle’s full head of bright ivory plummage does not fully develop until the birds are mature; the iconic white helmet of feathers appears approximately four to five years after birth. By this point, the bald eagle boasts more than 7, 200 feathers and a wingspan of six feet. 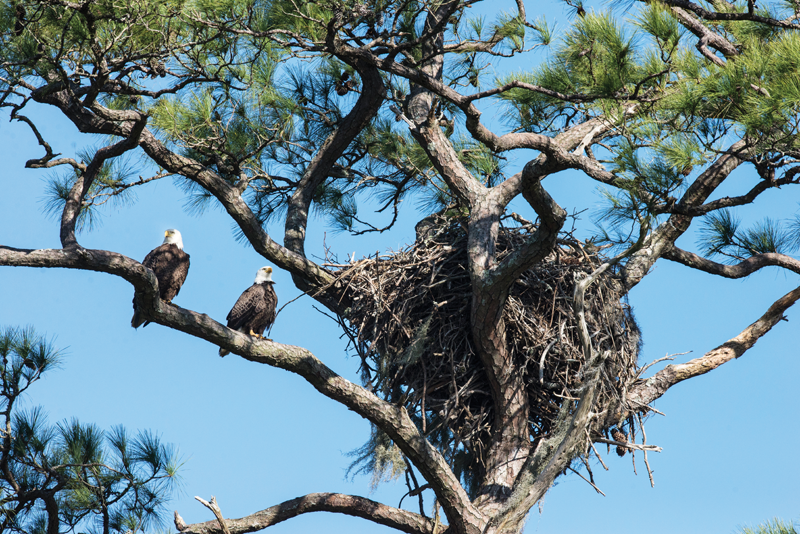 ABOVE After a courtship of sorts — which involves the male showing off his flight skills, vocalizing and nuzzling his chosen female — the birds monogamously mate for life. The couple then selects a breeding territory based on the food supply, ample trees for their nests and isolation from human activity. The average life span of an eagle is 25 years, and the birds typically reproduce one to three eggs, or eaglets, per year. Rather than recreating their nest handiwork annually for the newest offspring, birds simply repair and add to the existing nest. As a result, the structures have been known to become up to six feet in depth and as wide as a Volkswagen Beetle. Here, the eagles’ nest, a monstrosity to behold, is forged into the sinuous bends of spindly pine trees and hidden away from the noise and activity of the Causeway. 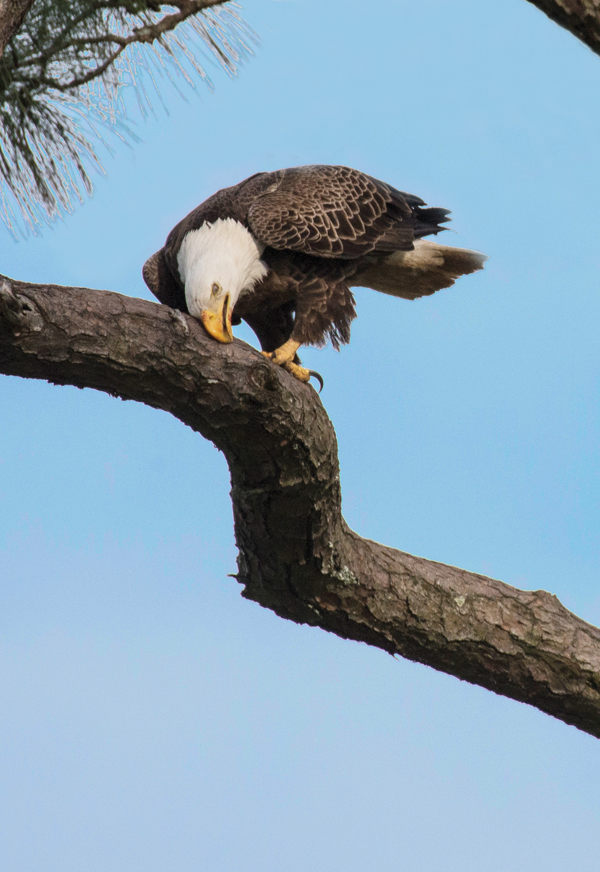 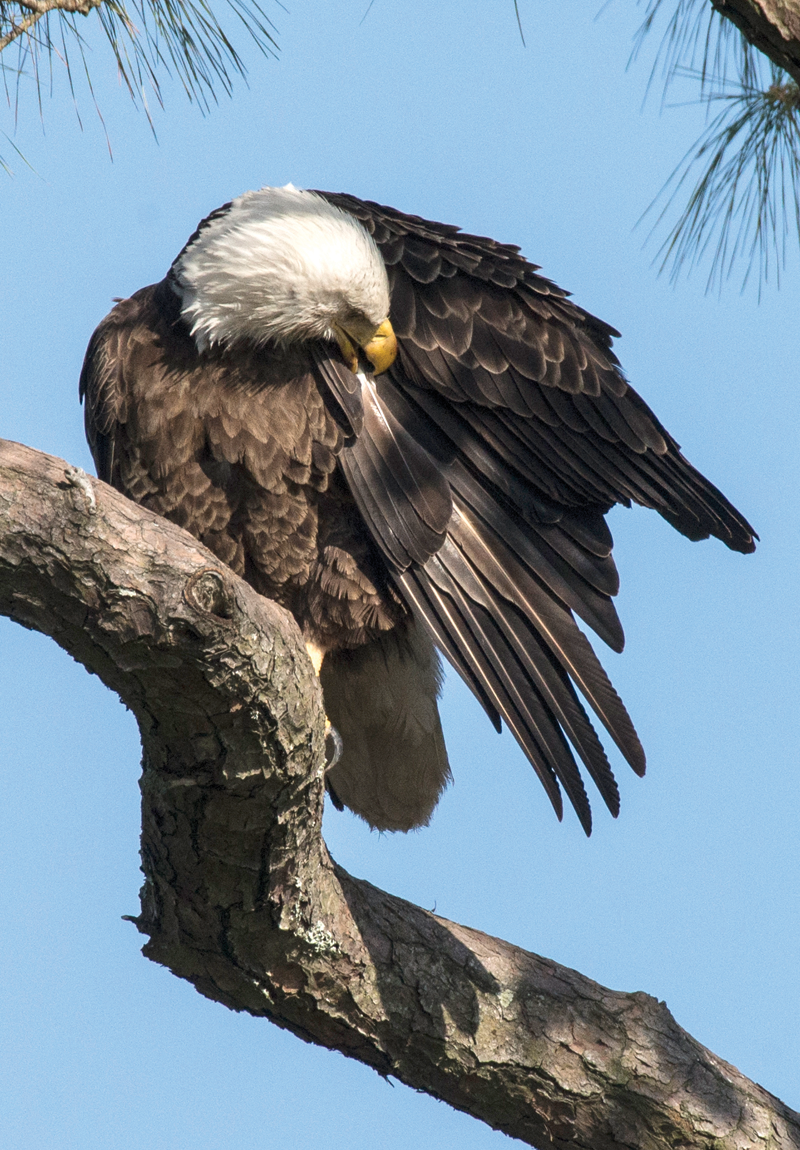 ABOVE The adult eagle must rip the meat into bite-sized pieces for its young. Therefore, after meals, the bird preens itself and resharpens its beak by scraping it against tree bark. 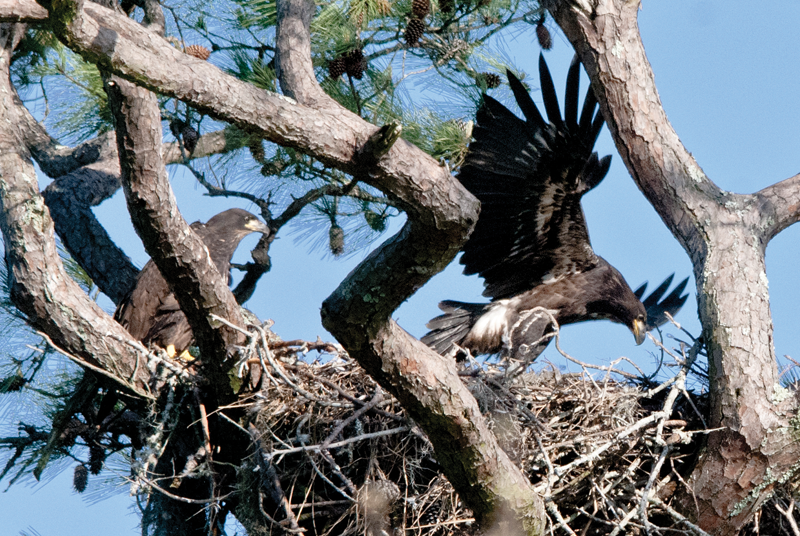 ABOVE As the eaglet grows, he begins flapping his wings inside the nest to strengthen them. Once he is physically ready, the parents instruct him in flying and hunting food, venturing further from the nest with each lesson. Gradually, the parents assist him less and less until the eaglet is self-sustaining. Most adult eagles also teach their offspring to follow migration patterns, which reflect those of their food sources. However, according to Roger Clay, a wildlife biologist with the Alabama Department of Conservation and Natural Resources, these particular eagles are so comfortable here that they call our area home year round.