Captain Sidney Schwartz stops mid-sentence and spins in his worn burgundy captain’s chair. “Give us a little shove!” he shouts to his two-man crew over the shudder of the engine. He turns back and eyes the black water of the Dog River Marina, the dim interior cabin lights reflecting off his glasses. It’s 5:01 a.m.

“Gonna be a pretty day for us, ” the veteran shrimper says after a beat of silence. “The wind has died down to zero at Middle Bay Light. We’ll head out there, see where the other boats go. Then we’ll go the other way.”

If he’s in a hurry, it doesn’t show. The 56-year-old captain settles into his chair and steers the boat with his right foot, the spokes of the wooden wheel worn smooth after 30 years under the sole of a shrimper boot. Sidney says his doctor was at a loss to explain why an old injury in that right knee never wanted to heal. “He didn’t know I steer with this leg every day.”

As his cypress-framed trawler, the Capt. Sid, eases beneath the Dog River Bridge, Sidney points to a computer screen displaying a digital map of Mobile Bay. He explains that a black X on the map (of which there are plenty) marks what shrimpers call a “hang, ” which is anything on the Bay floor that can snag a dragging shrimp net: old beacons, dredge pipes, pilings, washed out trees, you name it. A lot of shrimpers born after Sidney’s time won’t brave shrimping the Bay without that computer and its stored data. But for an old salt like Sidney, the computer is a matter of convenience, not necessity.

“Most of the hangs I’ve got in my head, ” he says casually. 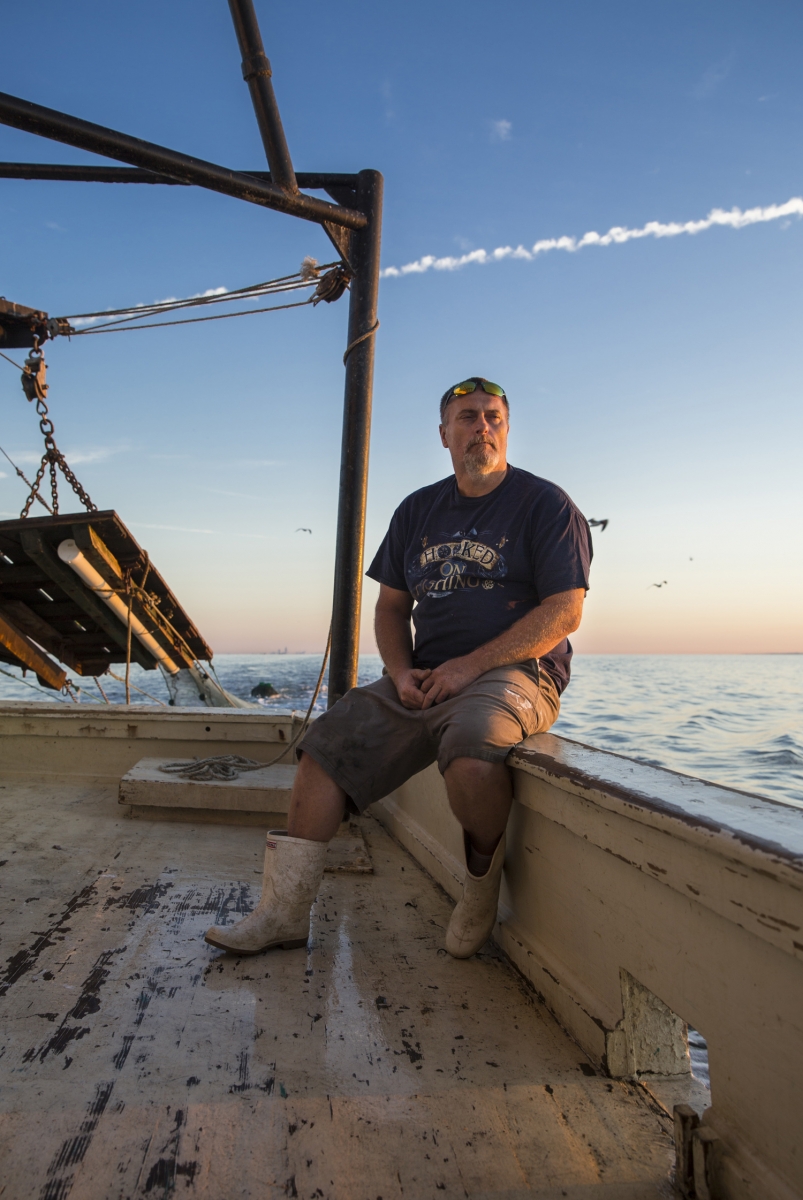 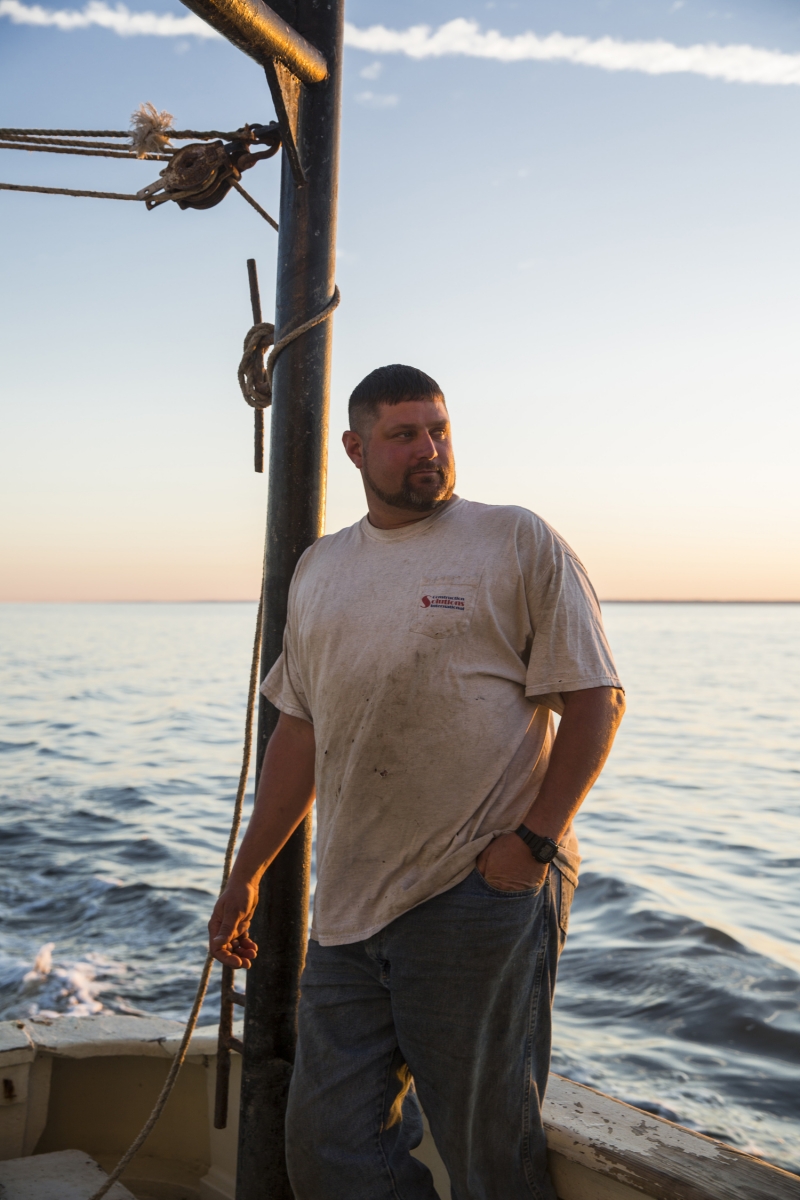 ABOVE LEFT Mike Cheatwood has been shrimping the Gulf and Mobile Bay for 30 years. “I’ve always loved shrimping, ” he says. “That’s been my choice of life.”

ABOVE RIGHT For Kenny Krause, shrimping makes ends meet when his work as a welding inspector slows. He’s worked with his father-in-law, Captain Sidney, for 22 years. 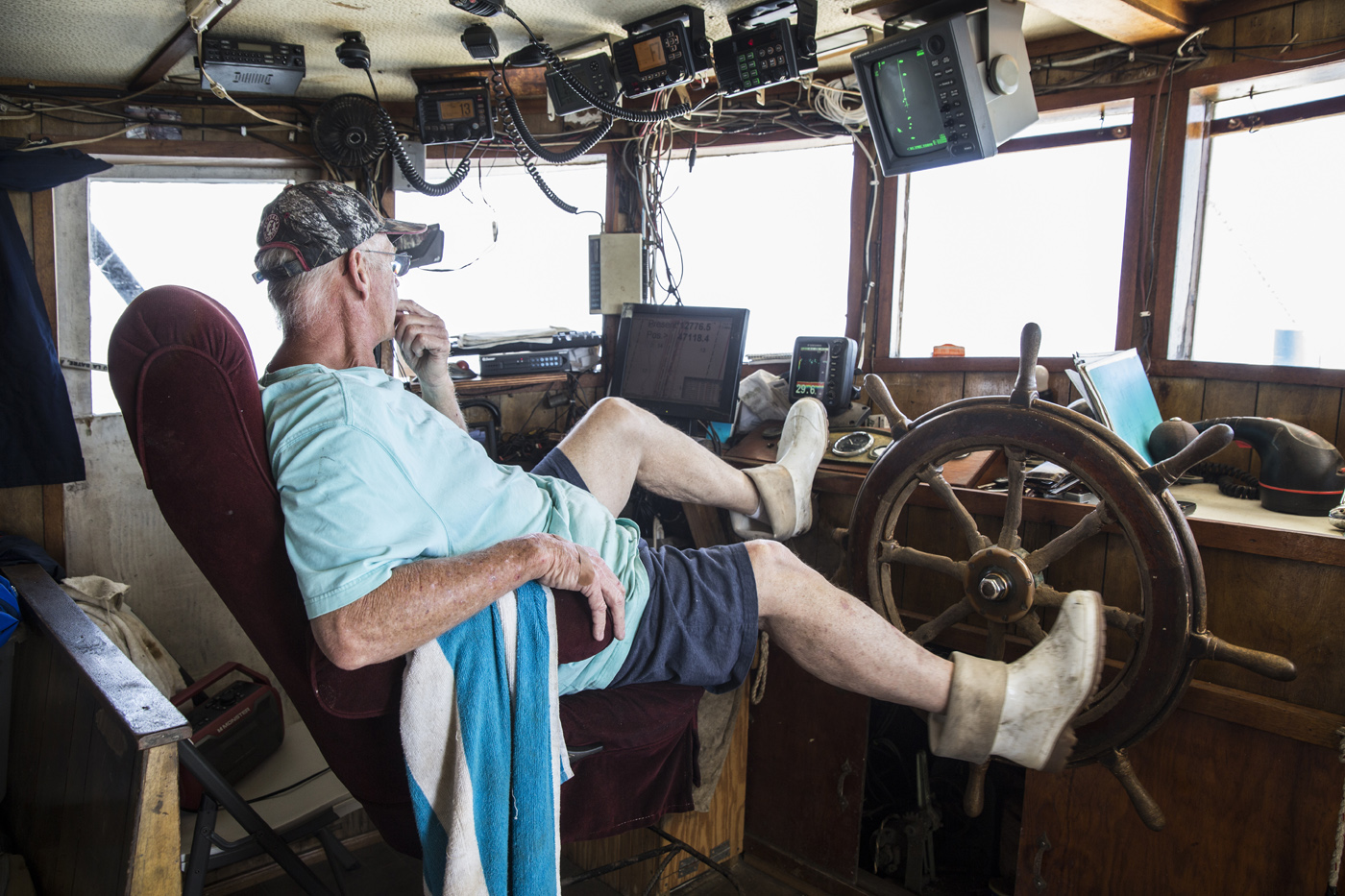 ABOVE Captain Sidney Schwartz pilots the Capt. Sid along the shipping channel in Mobile Bay, ever mindful of approaching container ships, fellow shrimpers and underwater hazards. The third-generation shrimper introduces himself as the boat’s “captain, owner and chief bottle washer.”

Sidney is a third-generation shrimper, having watched his father and grandfather drag a living out of Mobile Bay. He was first allowed to take the boat out on his own at the age of 16, alongside his 15-year-old brother, to navigate the murky waters with just a depth recorder and a compass. The only computer he had back then was between his ears. It was around that time his father opened up Captain Jackie’s Seafood on Dauphin Island Parkway. Now Sidney’s sister Shellie runs the shop part-time. As always, she’ll get first dibs on whatever Sidney brings back today.

As we make our way toward the shipping channel, Sidney instructs his crew to drop the outriggers. Mike Cheatwood and Kenny Krause step out into the cool dawn air and work swiftly. Both men have shrimped with Sidney off and on for decades. In his younger days, Mike shrimped the Gulf, which could take him out for 40 days at a time, but now he prefers day trips in the Bay. Kenny is Sidney’s son-in-law. He works as a welding inspector for an oil company in Theodore, but when business is slow, he shrimps to make ends meet. Mike says Kenny brings good luck, that shrimp practically jump into the boat when he comes along. Kenny doesn’t deny it. “I always seem to get laid off at just the right time.”

Captain Sidney himself once tried working in the oil industry a few years back. “But I got a bad reputation, ” he says, pausing for dramatic effect. “I quit whenever shrimping season came around.” 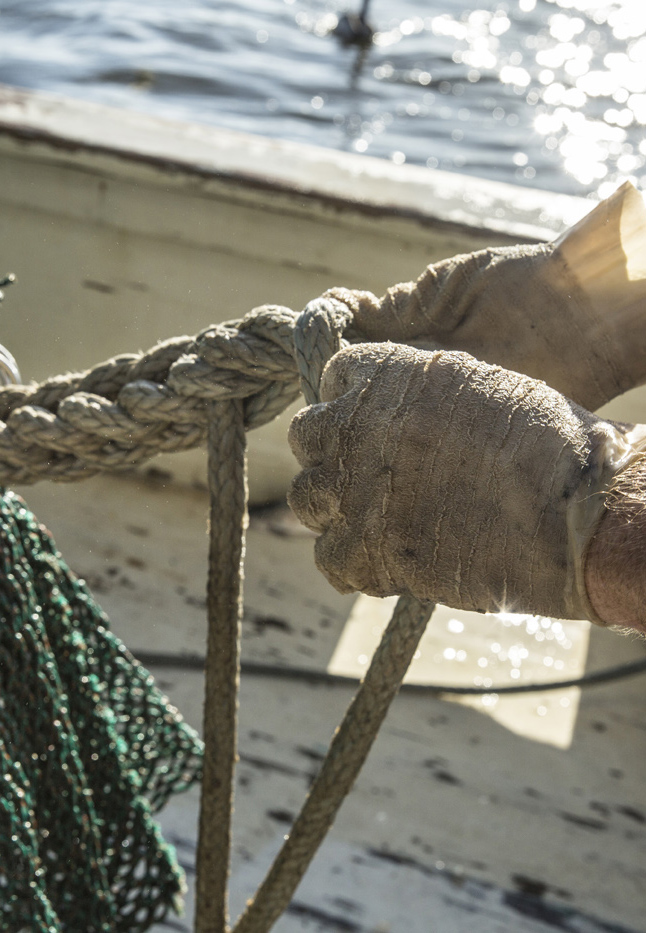 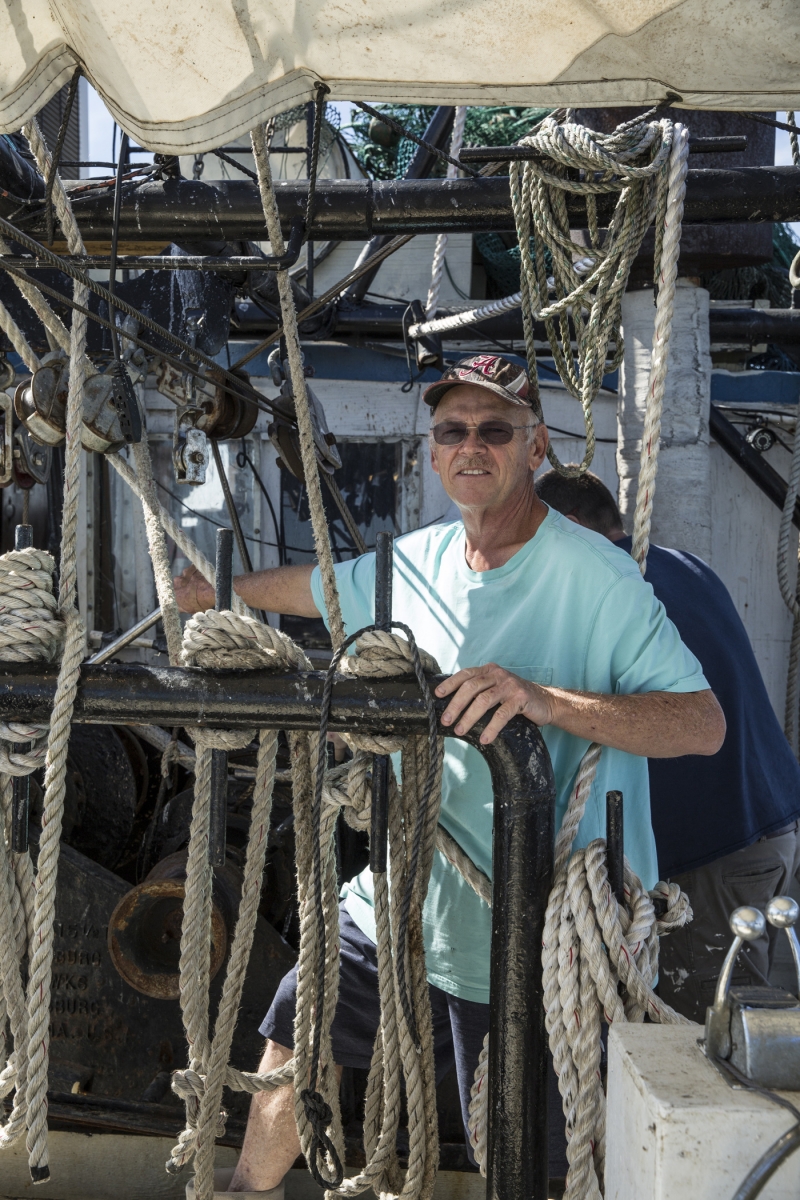 ABOVE LEFT Mike ties off the net, careful to add a “safety knot” on the very end to prevent a smart porpoise from releasing the entire catch.

ABOVE RIGHT Captain Sidney works the winch, lowering the main net for yet another drag in Mobile Bay. 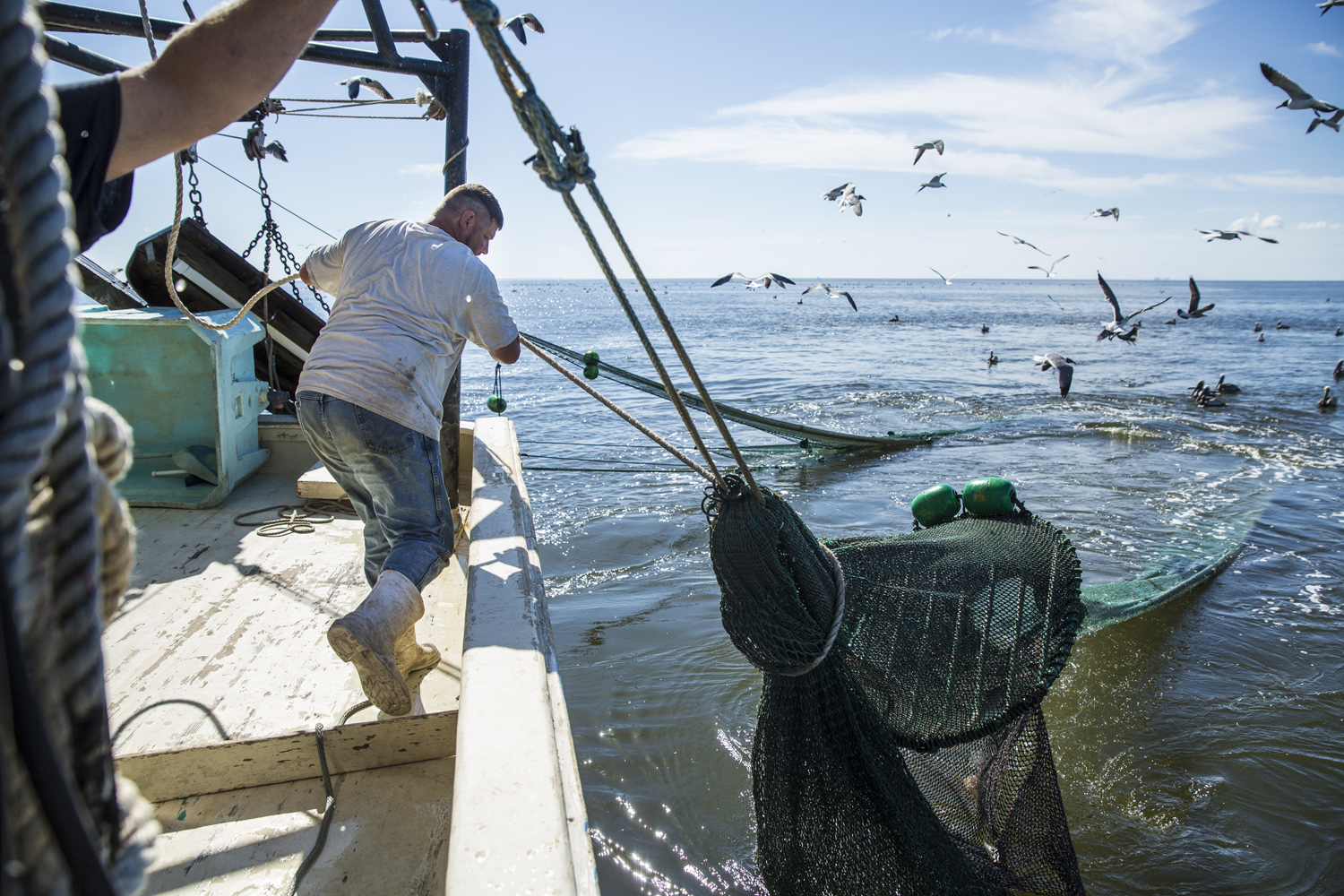 ABOVE Kenny, a fifth-generation Mobile Bay fisherman, wrangles in the net after an hour-long drag.

The captain brings a pair of binoculars to his eyes and scans the horizon. He points out another shrimp boat through the inky darkness, miles to the south. “He doesn’t have his runner lights on, ” Sidney says. “He’s trying to sneak out so no one sees him. If the Coast Guard comes out and sees him without those lights on, they’ll give him a ticket.”

Sidney says he has a good relationship with most of the other shrimpers. “Some of them we have trouble with, ” he says. “You always have a few guys who are all about themselves and don’t care about anyone else. But generally, most everybody tries to work together.”

As boats quietly jockey for position, the Capt. Sid finally reaches the shipping channel just in time for sunrise. During the day, shrimp tend to congregate in this deep north-south scar down the middle of Mobile Bay, burrowing at varied depths along the channel’s outer banks. The trick is to find the depth at which the shrimp have buried themselves on any given day. One way to do that is by using a “try net, ” a miniature shrimp net that can be dropped at different depths in order to get an idea of where the meaty swimmers might be found.

“That’s what I’m talking about!” Mike yells as he empties the first try net, which was dragged for two minutes at 25 feet. “Nine shrimp!” Apparently this is good news, judging by the fist bump Mike exchanges with Kenny.

Kenny wrangles the big net and ties it off with a long braided knot, adding what he calls a safety knot at the very end. “Some say this knot is to prevent porpoises from untying the net and stealing your whole catch, ” he explains. “But that’s just an urban legend.”

Sidney, Mike and Kenny simultaneously work the heavy Stroudsburg winch, lowering the net and wooden doors to the Bay bottom. As the Capt. Sid hums along the channel at 2.5 knots, those rectangular doors will naturally spread apart underwater, opening the net’s mouth. Five feet in front of the mouth, the “tickler chain” will drag across the Bay floor, spooking the shrimp out of the mud and into the waiting net.

Net deployed, we drag south. There’s not much to do now besides keep an eye out for hangs and big ships moving up and down the channel. In the shipping channel, a fisherman is at the bottom of the pecking order, so Sidney stays in constant contact with the bar pilots moving in and out of the port. One careless shrimper, he fears, could cost everyone the right to fish the channel.

After about an hour, the heaving net is winched up from the depths. It hovers over the sorting table like a teardrop as a swarm of pelicans and seagulls look on with anticipation. “Rats with wings, ” Kenny calls them.

The payload is released with a satisfying thud, and a mountain of life spills across the table: brown shrimp, white shrimp, silver eels, croakers, baby squid, glass minnows, horn bellies, catfish. Some of this bycatch will live through the sorting process, but the birds don’t make it easy. Hundreds, if not thousands, swarm the stern like bees. Mike and Kenny work quickly, picking out the shrimp and pushing everything else back into the water.

All told, we pull up 70 pounds of white shrimp and 5 pounds of brown shrimp in the first drag. “Enough to go on, ” Mike says. But it’s not a great drag. Anything less than that and fuel costs come dangerously close to overshadowing profit. Sidney turns the boat around with a puff of black exhaust and prepares to repeat the process along the opposite channel bank. 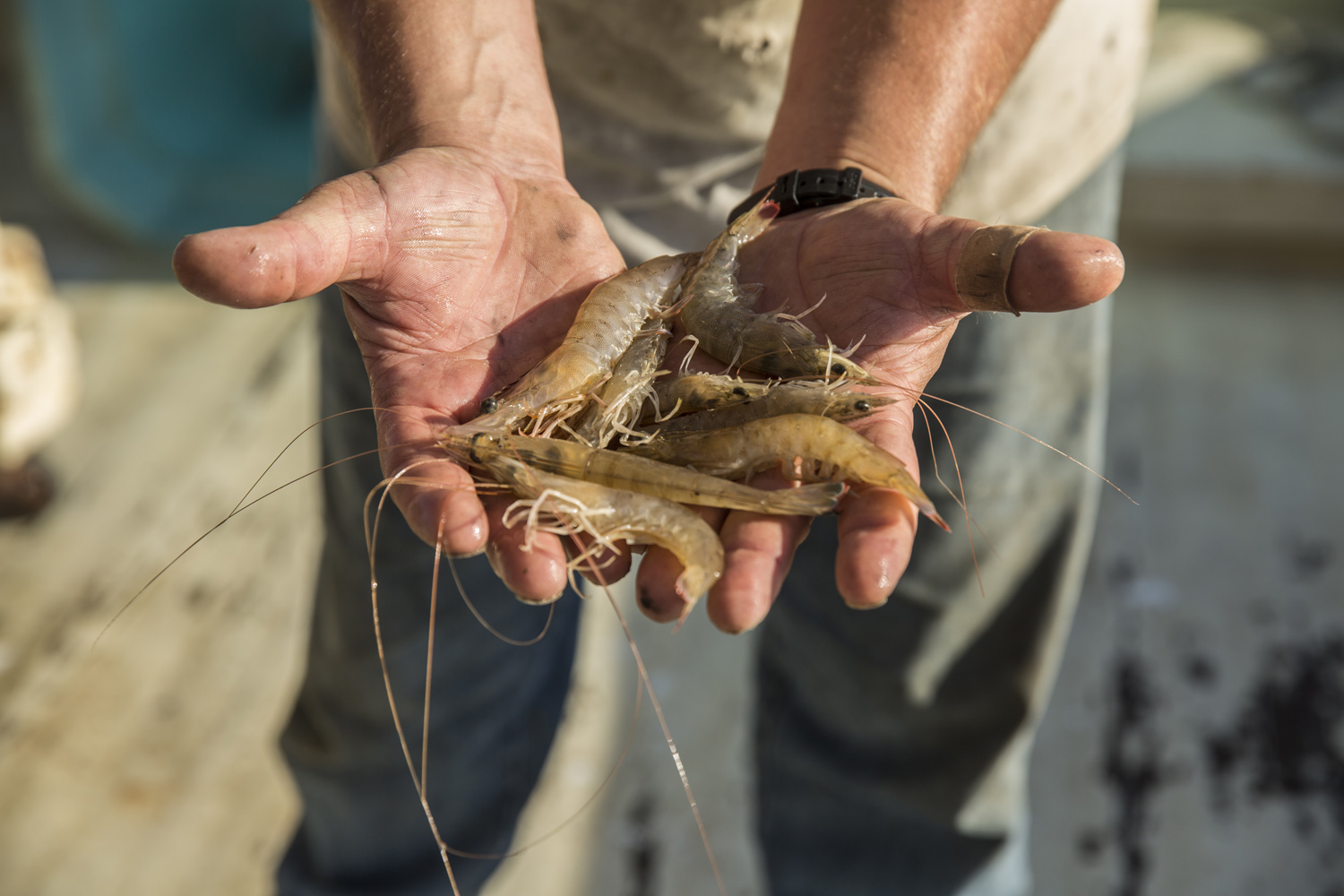 ABOVE Kenny presents a sample of the day’s spoils. 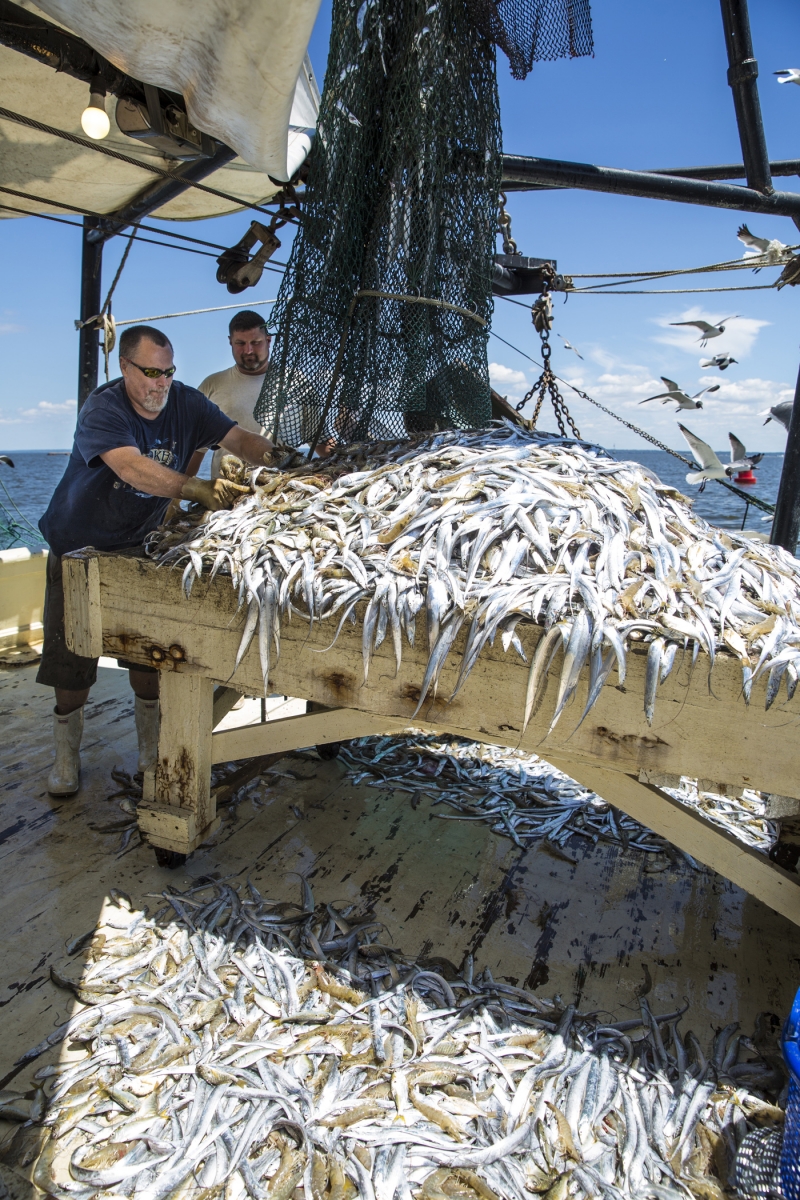 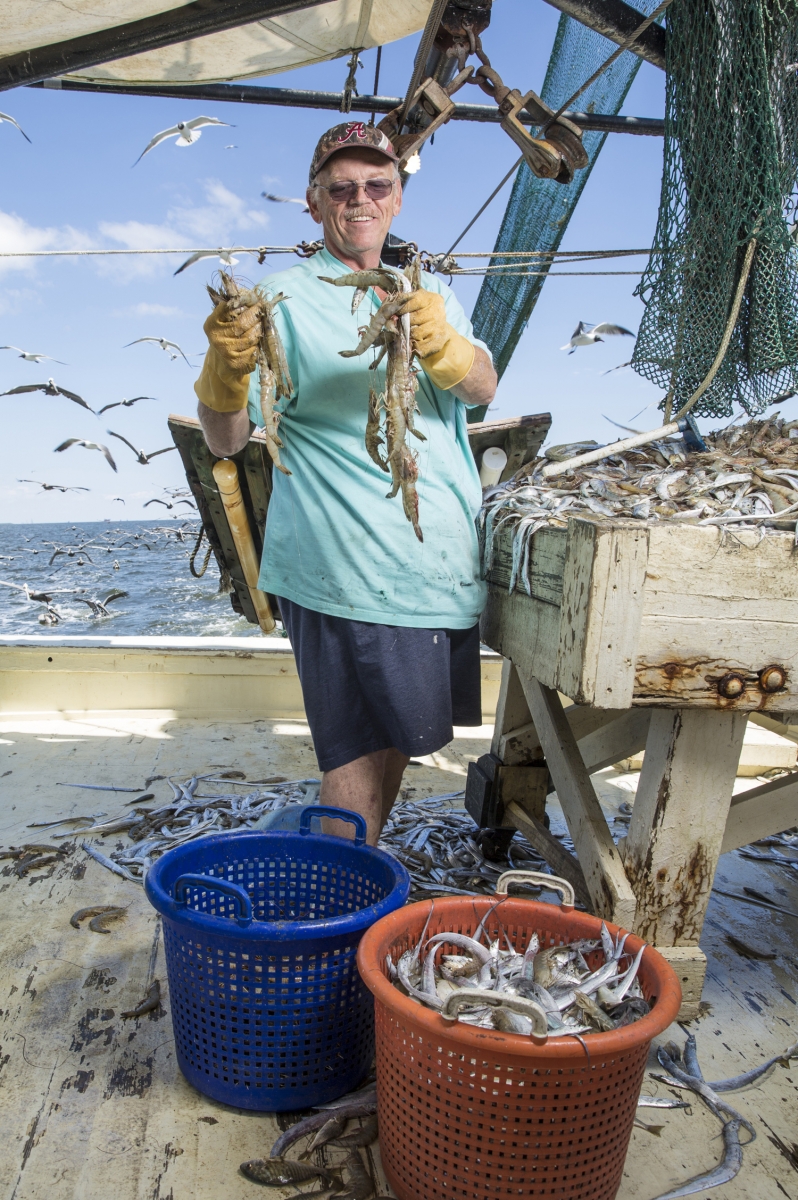 ABOVE LEFT The sorting table groans under the weight of the day’s largest catch, ready to be picked through by hand.

ABOVE RIGHT Captain Sidney gets in on the sorting, a process that takes roughly 45 minutes when the catch is this bountiful. 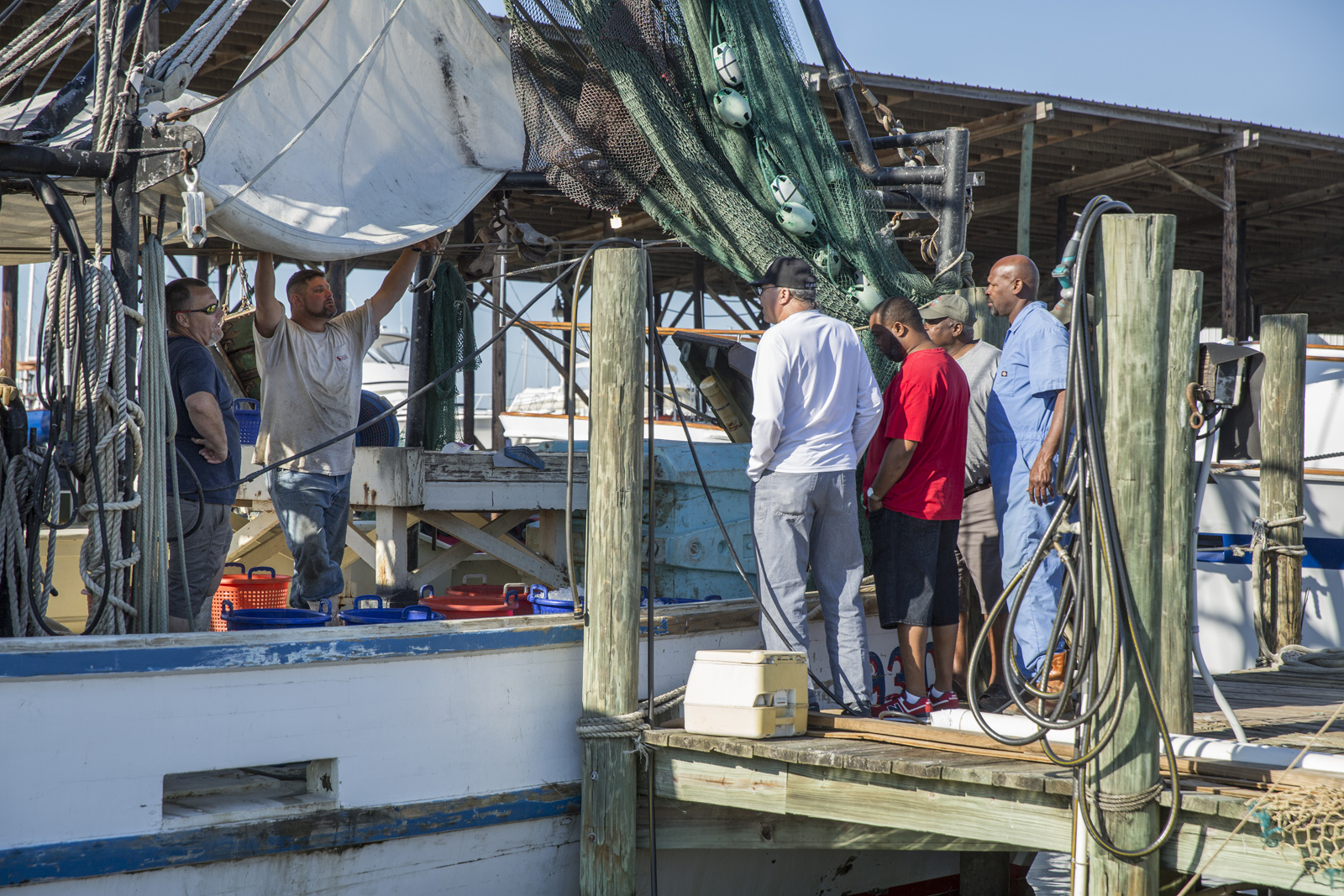 ABOVE Customers meet the crew at the Dog River Marina in order to make certain that they are buying local, fresh shrimp. Kenny presents a sample of the day’s spoils.

The Bay is still good for a surprise every now and then, even for an old-timer like Sidney. “We found a new hang the other week just below Middle Bay Light, ” Sidney says on our slow crawl back to Dog River Marina at the end of a long day. “I’ve dragged that area for years, and there wasn’t a hang there.”

But Mobile Bay was generous today. When the Capt. Sid touches dock, it’ll be 600 pounds heavier than it was at dawn, a good take. Sidney works the phone on our ride in, informing buyers what time to expect us. “People want to make sure that what they’re buying actually comes from the Bay, ” he explains.

But Sidney knows every day on the boat isn’t like this. He worries about competition from big seafood companies, the shrimp population, and, like any fisherman, the challenges ahead that he can’t see. “I hope I’ve got another nine or 10 years of shrimping left in me, ” Sidney says as Dog River Bridge comes into view. He puts his foot on the wheel, slightly adjusts his route and looks out over the water, no doubt thinking about the next hang.