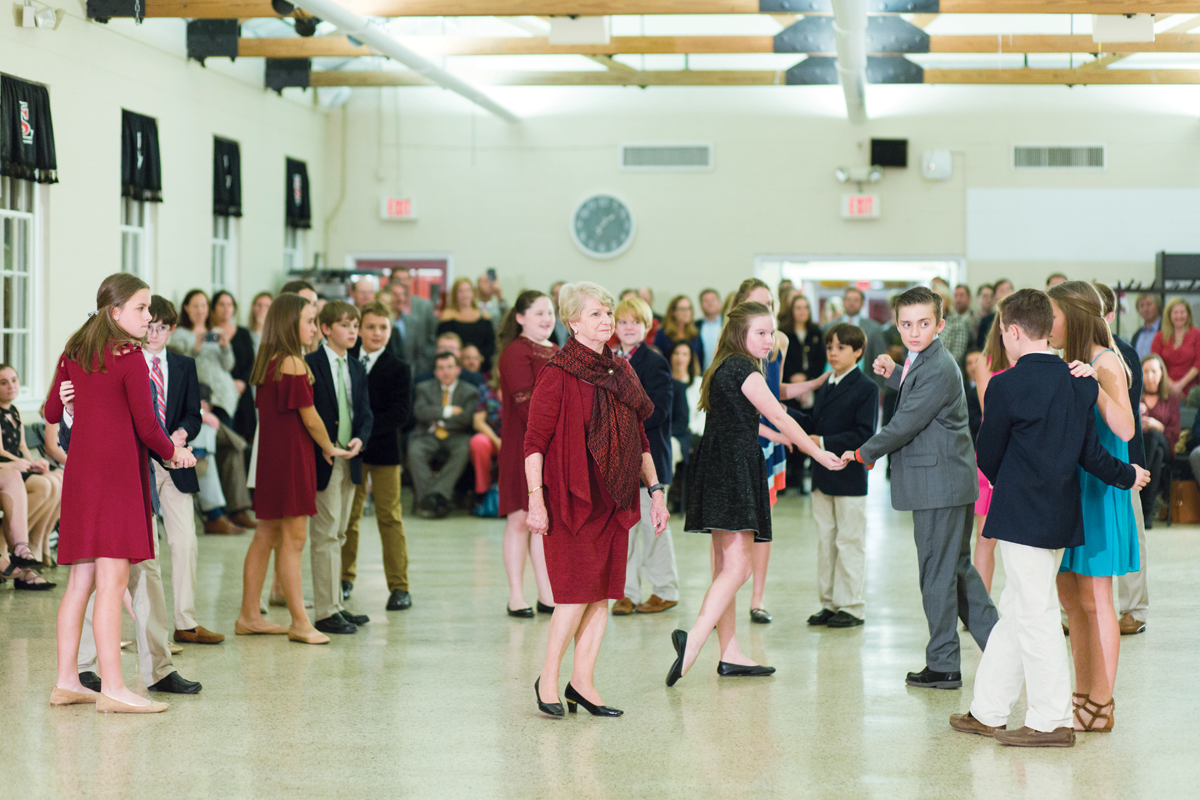 ABOVE Ann Druhan keeps a watchful eye on her students as they box step and waltz around the room, lending instruction as needed. Parents watch on as their children show off what they’ve learned all year. Photos by Elizabeth Gelineau

Tradition is the lifeblood of the South: following family footsteps as Mardi Gras royalty, gathering for Sunday night supper, recreating a secret recipe passed down through the decades. For more than 40 years, Ann Druhan has passed on a whole other Mobile tradition to the city’s youth, teaching sixth-graders the art and beauty of ballroom dance, traditional etiquette and social niceties that may otherwise be forgotten in this hustle-and-bustle world.

Druhan speaks lightly and joyfully, her smile never leaving her face. It’s a trait that’s driven much of her career in dance. As a teenager, even with less formal ballet instruction than her peers, she wowed at auditions with her passion for the movement and music.

“When I was 16, I’d only taken ballet for two years, and I was asked to audition for the city ballet. I didn’t think I’d trained long enough, but they put this music on and I just started dancing all over the stage.” After that, Druhan joined the first company as a soloist. “Even now, I can get very emotional about music. If I hear something, I get up and dance by myself. It drives my husband crazy!” she says. 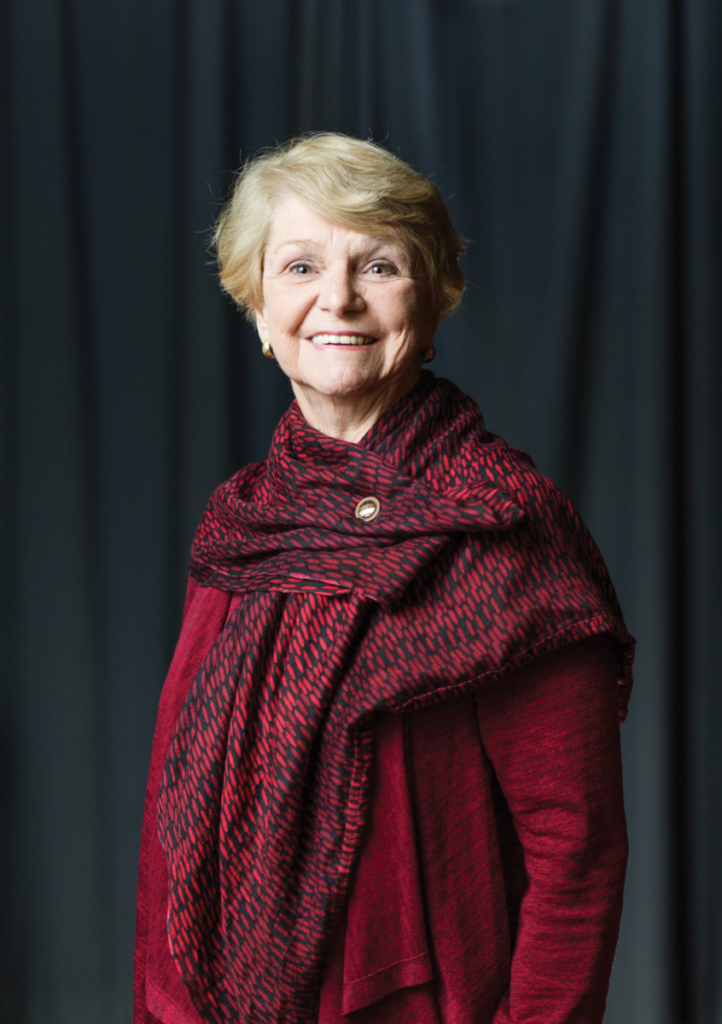 Some things have changed over the years while others have remained largely the same. Druhan laughs as she recounts, “I started out [playing] 33 1/3 records, then I had 45 records, then 8-tracks, cassettes, CDs and now it’s all on my phone!” That’s truly the biggest difference she sees, marking decades by the medium of music. The children, on the other hand, don’t change all that much. “They’re still very silly, ” she says simply. “They just are at that age.”​Druhan began teaching ballet in 1964, and she also taught for the Mobile Ballet and the after-school program at UMS-Wright. She later started teaching some overflow ballroom dance classes, then eventually took  over the program and added the etiquette portion. The rest is history.

The age of Druhan’s students is no coincidence. Sixth-graders — around 12 or 13 years old — are beginning to enter the social sphere, and, to Druhan, it’s important that they know how to conduct themselves. She takes her role as teacher seriously but looks for exciting ways to reward her students, too. She gives out a candy bar as a prize at the end of each class. (“They think that candy bar is a million dollars, ” she says.) Plus, the end-of-the-year Ruth’s Chris dinner is always an event the students cherish. And, of course, there’s the recital.

After weeks of practice, the students get to strut their stuff for their parents. The recital night begins with the grand march, in which each girl is paired with a young gentleman. The pairs form a circle around the large room — in this case, the cafeteria at St. Luke’s Episcopal School — where they follow Druhan’s instructions. Box step. Waltz. Freestyle. They play a game of Freeze, where Druhan plays the music and abruptly stops it, and everyone on the floor must freeze like a statue. Whichever giggling dancers do not stop in time are out. Even as couples leave the dance floor (“Men, always escort your lady to her seat!” Druhan reminds them), they’re clearly enjoying the night. Druhan’s husband, John, also circles the floor to lend advice to the young men.

The night is special for Druhan, too. She strolls through the couples, correcting their form and giving encouragement to shyer performers. Even though she puts on the front of an all-business teacher, she can’t help but sway and tap her foot to the music. “I once sat for a painting for Eugenia Foster for $5, and it was the hardest $5 of my life — I don’t like to sit still! I’m going all the time, ” she explains. 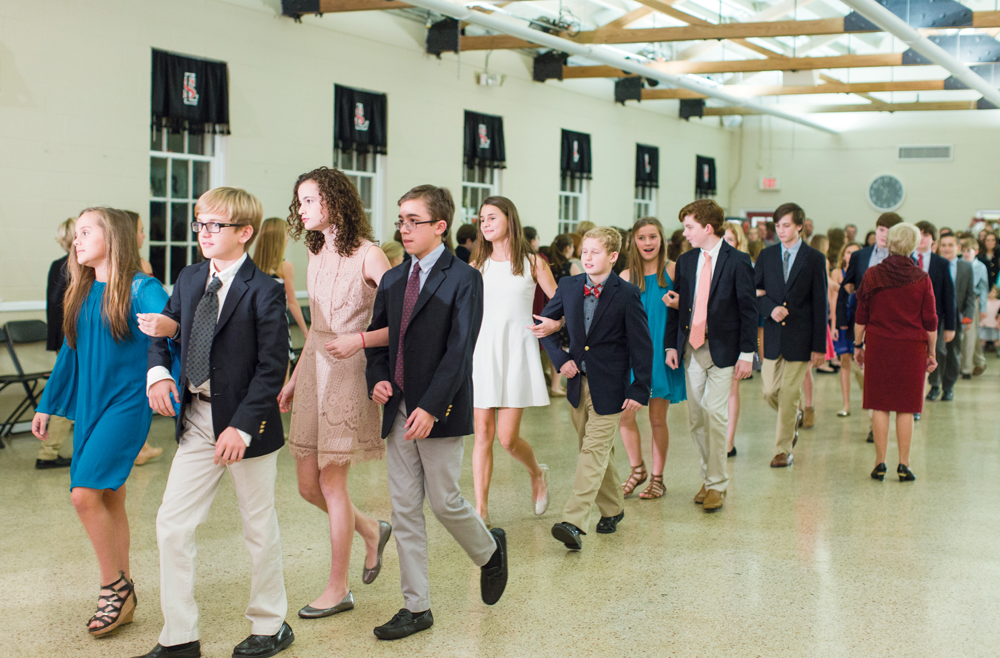 ABOVE Kicking off the night, students file in for the Grand March. A line of boys and a line of girls pair up to dance.

This year’s evening recital holds even more meaning for Druhan, as it’s her final season spearheading the ballroom classes. Her niece, Katy D’Olive, will take over the dancing portion this coming year, though Druhan will still head the etiquette lessons.

“Etiquette is mine, ” Druhan says with a smirk and a chuckle. “I don’t want people to read, ‘She’s retiring, ’ because I’m not! I probably will never retire.”

“Katy was in my very first class when I [taught] on my own. So that is special.”

Much like battered recipe cards or glistening queens’ crowns, Druhan’s classes are treasures shared among generations of families. She’s passed on the city’s social traditions and, in the process, she became a tradition herself.

“It’s been a really wonderful experience. I love to dance so much, and I hope I gave them an appreciation for dancing. They’ve got to know I love dancing because I danced every second I could with them, ” she says. “And I hope they had fun.”