Locally, Elizabeth Blaylock’s name often elicits mental images of children romping in the surf, wading in still pools or frolicking in the sand. But beach scenes are only one facet of this prolific Gulf Shores artist’s repertoire.

“I hear that a lot: ‘Oh, you do the children on the beach.’ But I like to paint everything — anything with a lot of color, ” says Blaylock, whose artistic inclinations surfaced early and never waned. In first grade, she was the kid selected to draw Santa Claus on the blackboard at Christmas; she majored in painting and drawing in college; she’s earned a living as full-time working artist since she was in her early 20s.

“My parents always supported me in art, ” she says. “I’m originally from Holly Springs, a really small town in northeast Mississippi. There were no real art classes available, but there were a couple of local artists there. I took lessons from one of them. I received my first paid commission when I was 16.”

These days, Blaylock’s commissions frequently are generated online, often from people she’ll never meet. “This was a commission from a man from Mississippi, ” she says, indicating a picture in her computerized archive. “He emailed me from Afghanistan, had me do portraits of all three of his children for his wife for Christmas.” As she usually does with commissioned portraits, Blaylock worked from photos supplied by the family.

It was portraiture that first lured Blaylock into the entrepreneurial life of a self-employed artist. When a BFA from the University of Southern Mississippi failed to generate employment offers that satisfied her, Blaylock augmented her skill set with commercial art, photography and printing classes at a vocational-technical school in Memphis. She then joined a medical supply house as a product photographer and commercial artist, creating ad layouts, photographs and drawings for medical journals, and the like. In her spare time, she did pastel portraits of friends. Encouraged by their responses, Blaylock started doing portraits of patrons at a local restaurant two nights a week. Part-time portraiture income soon exceeded her day-job salary.

“In my early 20s, I moved to New Orleans and started doing portraits on Jackson Square. My father had a fit, ” she recalls, laughing. “He said, ‘You’re going to starve to death.’ But I actually did really well. I got to see and do a lot. My apartment was on Royal Street. From my balcony, one way I could see the river; the other was Bourbon Street. It was a great time, ” she continues. “And I got to study with big-name artists who came to give workshops.”

Her one complaint: the Crescent City’s oppressive, midsummer heat and humidity. “After three or four years of it, I took off for the summer to work in a Cape Cod portrait studio, ” she explains. “Then in winter, when it was cold and the Quarter wasn’t busy, I would fly down to Isla Mujeres, a little island off the Yucatan Peninsula. It was very cheap then.”

She spent nine years in New Orleans, followed by stints in St. Augustine and Charleston, where she was a member of a co-op gallery on King Street. “At Christmas, I would usually have a kiosk at the mall to sell artwork and do portraits, ” Blaylock says.

Through it all, she maintained a connection to Gulf Shores where her parents had settled. “I’d usually spend October and November here, doing shows and visiting my parents.”

About 20 years ago, Blaylock started looking for studio space on the Gulf Coast. “Then I met Ed (Johnson). We got married, and I ended up in Gulf Shores, ” she explains. “When I sign all my paintings (with my maiden name), I add GTG, meaning ‘Glory to God.’ Because if they are any good, He had something to do with it.”

Blaylock doesn’t enjoy travel the way she once did; she no longer has the inclination to do outdoor art festivals. So her marketing efforts have moved online.

She taught herself basic computer skills, and joined online galleries, like DailyPainters.com. “They get thousands of hits a day, and I have gotten a tremendous response, ” she says. Her online presence augments traditional gallery affiliations in Fairhope (Fairhope Artists’ Gallery), Foley (Performing Arts Assoc.), Orange Beach (Compleat Studio), and Carmel-by-the-Sea, Calif. (Mountainsong Gallery). She also shows in regional and national juried exhibits, including the American Impressionist Society’s 2011 show in Carmel-by-the-Sea, Calif.; the Women Painters of the Southeast’s 2012 show in Jacksonville, Fla.; and the Oil Painters of America’s 2012 show in Evergreen, Colo. She currently has work in the Oil Painters of America show in Petoskey, Mich.

Blaylock is so prolific, in part, because she works fast, completing most paintings in a day or two. Four to five works per week is, for her, a sustainable pace. Large, commissioned portraits (particularly those with multiple figures) take longer. But even those take days, rather than weeks. And she bursts out laughing when asked about paintings that require months to complete. Her streamlined approach is so popular with other artists that she’s often asked to teach workshops. 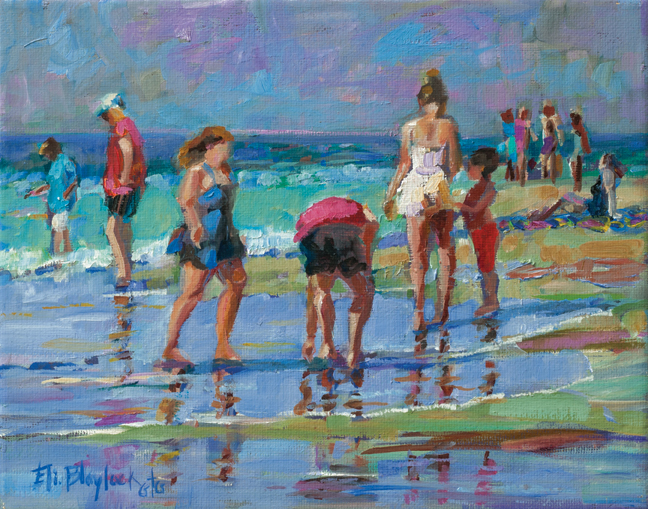 ABOVE Blaylock incorporated a lot of different figure gestures into this oil beach scene of people walking
in the surf.

Blaylock works wet on wet with undiluted (no drying agents or medium) high-quality oil paints on canvas. She does little or no prep work and doesn’t rely on preliminary pencil or charcoal drawings for guidance. “Occasionally, if I have a difficult composition, like working out proportions of figures from different photos, I might do a detailed sketch. But it’s rare. I just go right in with the brush. In the beginning, I use something that can be wiped off if it doesn’t work, ” she explains. “I do that until I’m happy with the composition.”

She’s comfortable making changes on the fly, even late in the process. “Completed” pieces remain on the easel overnight to be evaluated with fresh eyes the next morning. If something’s not quite right, she paints it out.

Blaylock is not out to impress folks with deep, thought-provoking or mysterious images. “I love painting figures, still-lifes, beach scenes and just about anything that gives me the opportunity to play with color and shape, ” she says. “There are artists who have commentaries, and that’s good, ” she continues. “But for me, I just want to bring a little light and beauty into people’s lives. If they look at my paintings and smile, then I feel like I’m a success.” 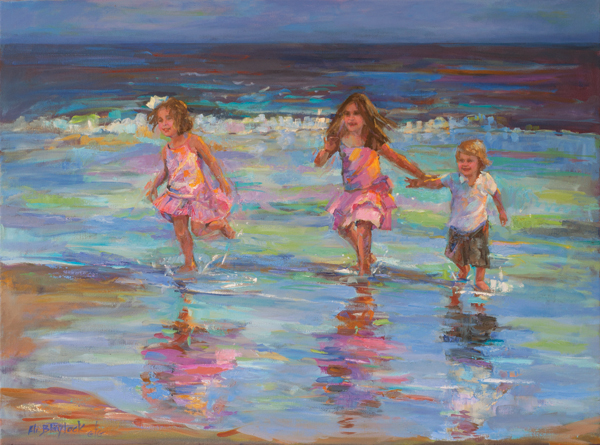 ABOVE Children frolicking on beaches are among her favorite subjects. The impressionist is regularly commissioned to capture portraits of youngsters playing by the water. 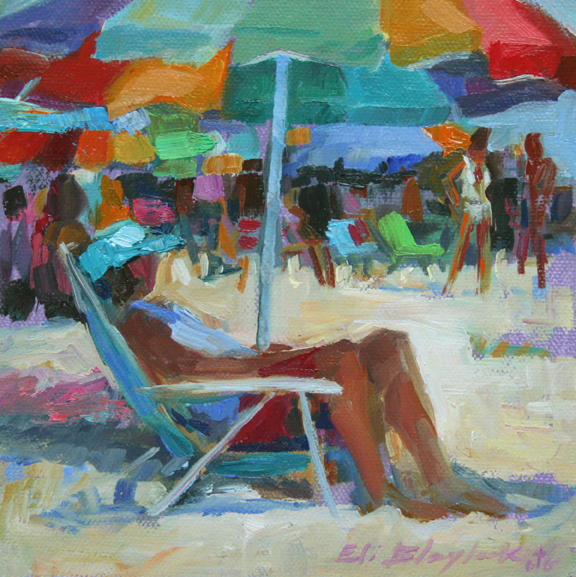 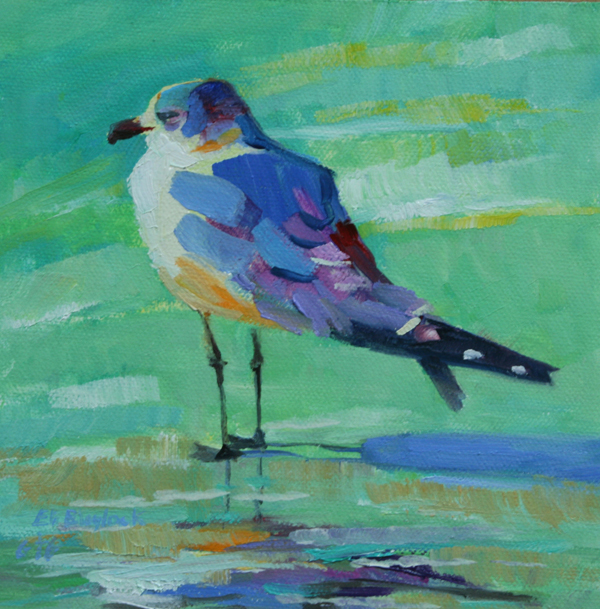 ABOVE LEFT AND BELOW Blaylock often finds inspiration along the sands of Gulf Shores. She's an avid people watcher, particularly during the busy seasons, like Fourth of July. “Here, I went to the beach and took tons of photos of spring break vacationers.” She then uses her photography as jumping off points for her painting compositions and subjects.

ABOVE RIGHT “Right now, I'm doing a series of birds, ” Blaylock says. She has found that the variety of species that migrate through the Gulf Coast region provide a myriad of opportunities for her to experiment with shape and color. Here a seagull gazes over the water, waiting for dinner. 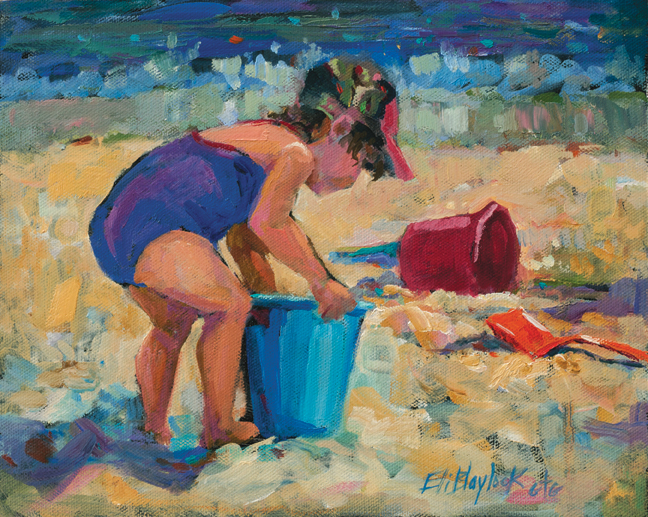