Entering Stevi Gaston’s backyard studio for the first time, I spot a lone floral still life peeking out from amongst a dozen or so other recent paintings. It seems out of place, an anomaly. Gaston’s work is virtually all figurative: she paints women (frequently black women) and almost nothing else. Nor does she do “typical” portraits. Rather than a realistic recording of one's physical appearance, she creates visual stories around brief glimpses into the lives of those she paints. But her stories, and the women who inspire them, are rarely reality-based. They’re figments of her artistic imagination, conceived in sketchbooks and refined with oils on canvas.

It’s not surprising that Gaston finds herself painting women and girls. “My mother had five sisters. I have four sisters, and I have four daughters. I’ve always been surrounded by women, ” Gaston explains. “That’s naturally some-thing that I paint, because that’s what I know, ” she continues. “I paint Southern women who have a lot of strength and soul and vulnerability too.”

Gaston started her series of black women with a mother embracing her child as subject. “I thought she had a lot of character. Most of these women just come out of my head. They’re wanting their stories to be told, ” she says. “I have to get out of the way and let them come out.”

Questions about Gaston’s at times monolithic focus on portraying black women from a bygone era elicit mention of “The Help.” But while lauding its role in elevating public interest in the lives of women like those inhabiting her canvases, Gaston downplays any cause-and-effect connection to her art. These paintings aren't about catering to current market whims, she says. Besides, her fascination with the ongoing series’ most prominent figure predates the popular Kathryn Stockett novel. 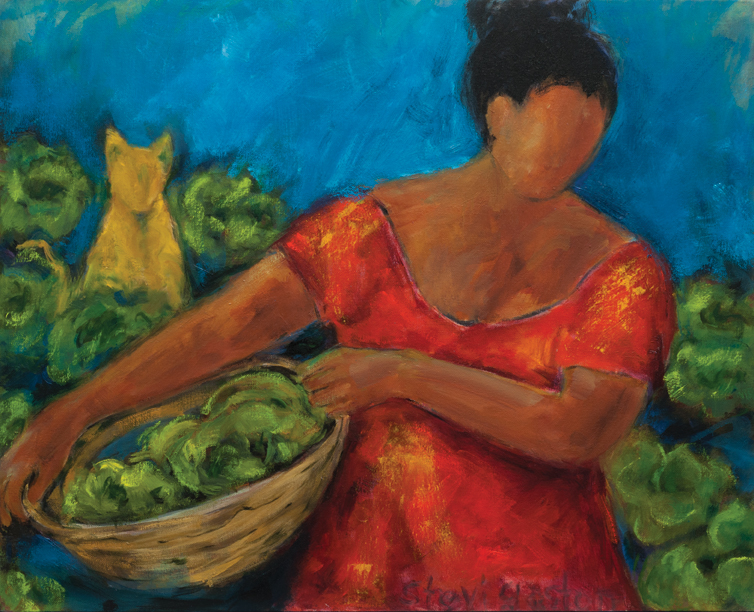 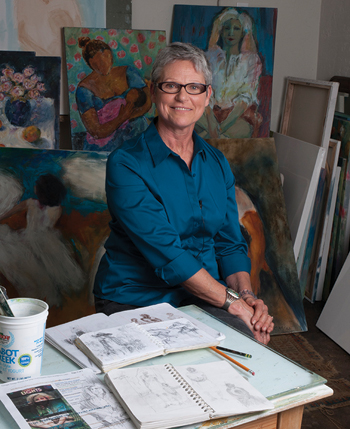 LEFT “This is another painting of that same woman. I’ve painted her in many different settings, exploring what I thought her life might be like. In this one she’s just coming in from her garden with a mess of greens, ” Gaston says. “And yes, that is our cat. He’s all over the studio, won’t leave me alone, ” she adds, laughing. “He’s just got personality all over the place, so he ends up in a lot of my paintings.” RIGHT Painter Stevi Gaston’s portfolio focuses primarily on figures of women in their various roles. The rare still life in the mix, like this vase of flowers to the back left, still focuses on soft, feminine lines and colors.

While there’s no single influence underlying Gaston’s series, it emerged soon after she and husband Barry bought and restored their Downtown Mobile home in 2006. “There was a black family who lived here before us. They raised seven children in this house. We met them; they're all grown now, in their 50s. They walked through the house. They cried and talked about their parents and about how happy the family had been in this house. It was their story. And that’s really what painting is: capturing the story and connecting to the person. That had a big effect on me.”

Also heavily influencing Gaston’s work were her childhood memories of time spent with her family’s maid, Ora. “For many people my age, a lot of the context of what we remember from our childhood comes from maids, because that’s who was around us all of the time. They were family. For me, Ora was a great friend and confidant who took care of us, ” she says. “Moving back here took me back to that time. 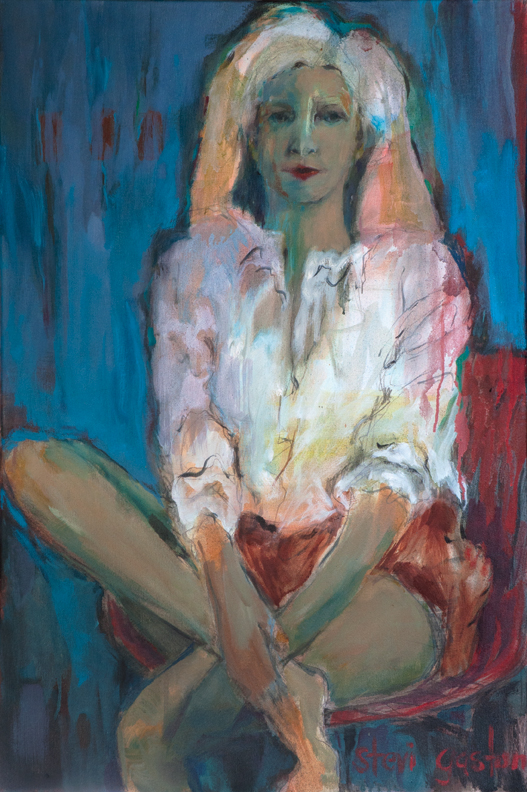 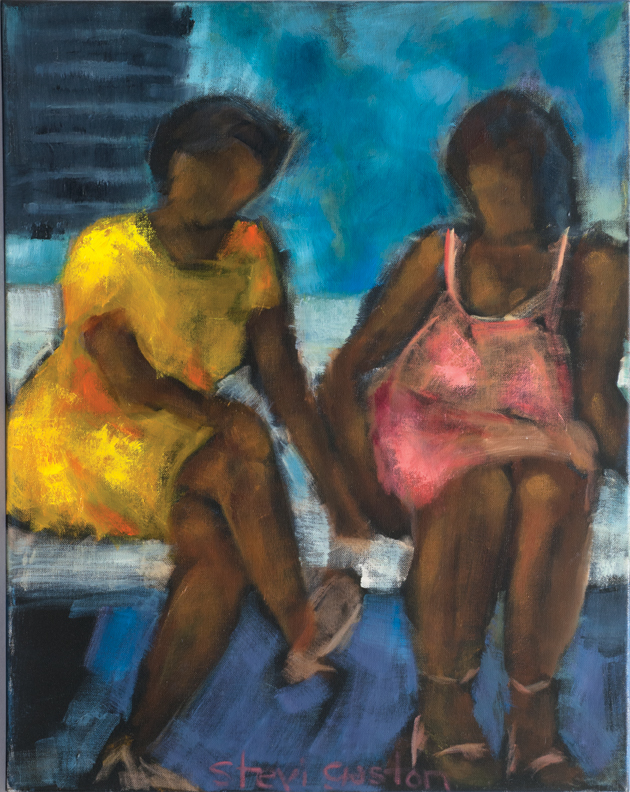 LEFT “The sketch I did came from something I saw in a magazine, ” she says. “I just liked the whole image of how she looked; there’s just a kind of a carefree look about her. I like that she’s got a lot of drawing on her. I love to draw. I might love drawing as much or sometimes more than painting. Some of those lines are not the original drawing showing through. I came back in, just to get the folds of her shirt. I think this one probably took me a couple of months. That may be my favorite color combination, that blue and that red. I use a lot of it.” RIGHT “They are sitting on a bench or a swing of a house. And that’s a shutter up there at the top behind them, ” she adds. “Just two girls talking — gossiping, telling tales, like us Southerners do.”

Gaston spent her early youth in Midtown Mobile and was 11 when her family moved to Fairhope. She enrolled in the School of Organic Education, where her artistic affinity was nurtured. “There were fewer boundaries there, ” she says. “Self-expression was encouraged, which was really freeing for me. I flourished.”

The family relocated to Boca Raton, Fla. in time for Gaston’s junior year. Her art teacher there encouraged further development of her talents, which led Gaston and her mother on a tour of college-level art schools. They selected the Ringling School of Art in Sarasota, Fla. “That’s where I got most of my formal artistic training, ” explains Gaston, who later added art education classes at the University of South Alabama.

Today, Gaston typically spends more time with pencil and paper than brush and palette knife. “I start by drawing in one of my sketchbooks. If I can get the composition right I’ve got the whole thing knocked. Then I can transfer my idea to the canvas and start painting, ” she says. Her palette is a large, table-mounted sheet of glass. She premixes colors on the glass or blends them on the canvas, depending on what she thinks a particular painting requires.

She tends to paint thin, allowing parts of her underlying sketch to show. But her technical approach seems to be based mainly on responding to what’s there. At times that means admitting defeat and setting a painting aside, at least temporarily, or even starting over. “Sometimes I’ll paint over what I’ve done, and something will come through and make what I’m doing better than if there hadn’t been anything under it. And I like that, because that sketch is like the bones of the painting, and the architecture – how it’s constructed, ” she explains.

“If it’s still wet, I scrape a lot, even if it’s not going badly. I do a lot of knife scraping, a lot of turpentining things out. I don’t want the painting to be too precious or too perfect, because life’s not like that, ” she says. “I want it to look a little beat up to bring out the beauty of it.”