Rebecca Anne Roubion and Christopher Saylor Czarka were united in holy matrimony at the Cathedral Basilica of the Immaculate Conception in Mobile on May 21, 2016 at 2 o’clock in the afternoon. The Rev. David Barton, LC officiated, and Rev. Daniel Good co-celebrated.

The festivities began Thursday with a family crawfish boil, followed by a bridesmaid’s luncheon Friday in beautiful Spring Hill. After the rehearsal, the parents of the groom hosted dinner at Five Rivers with catering by Guido’s of Daphne.

Given in marriage by her father, Rebecca wore a sweetheart Alençon French lace gown with a scalloped train and keyhole back designed by Marisa. Adorned in a cathedral-length veil and blusher, she carried a lush bouquet by Belle Bouquet with white garden roses and peonies entwined with her grandmother’s heirloom rosary beads.

Flower girls were Elise and Reagan Dunbar, nieces of the groom. The ring bearer was Benjamin Adams, nephew of the groom. All three wore French heirloom outfits custom-made by a family friend. Ceremony music included trumpet, violin and organ with traditional hymns led by Melanie Zoghby Cummins. A reception was held at The Admiral.

Guests were welcomed with cocktails and hors d’oeuvres preceding decadent seafood gumbo, shrimp and grits and pork tenderloin. The bride’s cake by Sally’s Piece-a-Cake was four tiers and decorated with soft, ivory flowers. The ten-piece Motown band Fuego kept the party going and led the guests downstairs with a second line sparkler sendoff.

Chauffeured by a family friend, the couple was whisked away in a vintage Studebaker. Following a honeymoon, the couple now resides in Nashville. 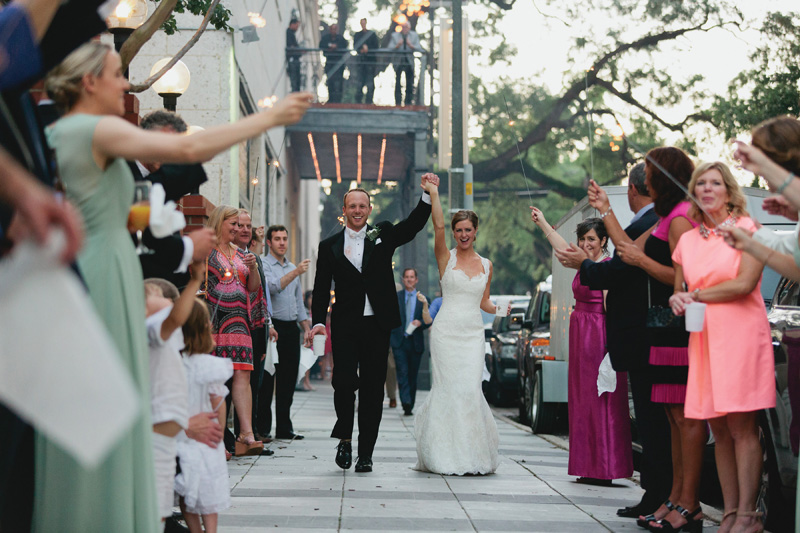