Every summer my family hits the road for the great American vacation. We have logged thousands and thousands of miles in our ongoing quest to see all 50 states. We do it the old-fashioned way — with maps and guidebooks — no GPS, no DVD players and, until recently, no electronic games. (As most of our offspring are adolescents, we now allow everyone an iPod, which means a little peace and quiet for the parents.) And, here’s the biggie — no fast food. We stop and sample the local flavor along the way.

It all started in 2002. Our children were 2, 4, 6 and 7. We drove from Mobile to Maine. It took four weeks, and we traveled more than 4, 000 miles. Sounds like a nightmare. We discovered, however, our brood behaved better on a marathon auto excursion than while carpooling to and from school. It was fun. Really fun! We returned home tired, but smiling, with many priceless memories, an interesting
assortment of souvenirs and quite the collection of recipes.

Now, we have been to the Great Lakes, the Great Plains, the Grand Canyon, the Grand Hotel in Michigan, the glaciers in Alaska and Elvis’ Graceland. We have seen Mount Rushmore, Niagara Falls, Ruby Falls, the Redwood Forest and Rock City. It has been almost a decade, and we are almost done, with only a couple of states left to visit. But, the trip is far from over. After all, it is a great big, delicious world out there.

If you’ve only ever eaten the canned versions, you are in for a treat. This flavorful recipe comes from “It’s All American Food” by David Rosengarten.

1. Preheat oven to 250 degrees.
2. Place the beans in a large bowl or container, and cover with cold water, plus 4 inches more. Let soak for at least 12 hours. Drain the beans; discard the liquid. Place the beans in a large pot, and cover with water, plus 5 inches more.
3. Bring to a boil, lower the heat, and simmer uncovered until tender, about 40 minutes. Drain the beans, reserving the liquid.
4. Heat a large Dutch oven with a tight-fitting lid over medium-high heat. Add bacon and cook, stirring until crispy, about 6 minutes. Add onion and cook, stirring until lightly browned, about 6 minutes. Add beans, and stir in 4 cups of reserved cooking liquid. Stir in the molasses, brown sugar, ketchup, mustard, salt and cloves. Season with pepper to taste.
5. Bring to a boil on top of the stove uncovered; then cover and bake in the conventional oven until thick, about 3 hours. If the beans seem too thick, stir in a little of the reserved cooking liquid. Serves 6. 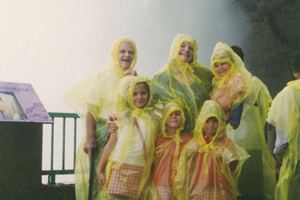 In the summer of 2005, we took an awesome Alaskan cruise, followed by a drive down the West Coast from Seattle to San Francisco. While in Sitka, Alaska, one of our sons, Sullivan, right, caught a colossal, 20-pound king salmon.

1. Combine Chinese five spice with peanut oil and marinate salmon in this mixture for half an hour before cooking.
2. In a small saucepan over low heat, combine the plum sauce, Pickapeppa sauce and rice wine vinegar. Grill the salmon over a hot fire until medium rare, 2 – 3 minutes per side (or until desired degree of doneness). Serve with warm sauce. Serves 6.

In 2006, we drove from Mobile to the Grand Canyon and back, our longest trek to date. (We covered 14 states and 5, 585 miles in five weeks.) We visited both the south and north rims of the spectacular canyon — it is truly grand!

This glorious guacamole comes from the pages of the “Grand Canyon Cookbook.”

Peel, pit and mash the avocados. In a medium bowl, combine remaining ingredients with mashed avocados. Blend until mixture is smooth and creamy. Salt to taste. Makes about 3 cups of guacamole.

We have visited the birthplace of Kool-Aid in Hastings, Neb.; the Spam Museum in Austin, Minn.; and the Corn Palace in Mitchell, S.D. While we were staying in Clear Lake, Iowa, (where Buddy Holly played his last concert at the Surf Ballroom) I discovered Iowa is famous for raising superior beef. It is also the home of Maytag Blue Cheese.

Serve these creamy, sinful potatoes with a good grilled steak. The recipe is borrowed from “Prairie Home Cooking” by Judith M. Fertig.

1. In a saucepan, cover potatoes with water; bring to a boil. Cook at gentle boil for about 15 minutes, or until
potatoes become tender.
2. Remove from heat, drain and pour in 1/2 cup of the milk.
3. Mash the potatoes until smooth, adding more milk as necessary. Add the blue cheese and butter to the potatoes, and mash until well blended. Season to taste with salt and white pepper. Serves 6 – 8. 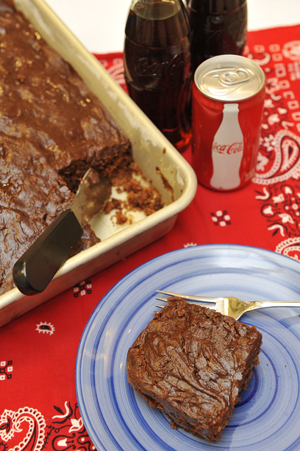 The fabulous Coca-Cola Museum, in Atlanta, is worth a visit.

This cake is always a crowd-pleaser.