On the road again, just can’t wait to get on the road again.” Me too, Willie! And this time, the road leads to Baldwin County, which is bigger than the entire state of Delaware. Fortunately, there are some pretty cool roadside sights in this big place. Some possess historical or natural significance; more than a few just make you scratch your head and say, “hmm?”

Elberta is known for its biannual sausage festival, German culture, and a 25-foot spider. Drive down rural Leiterman Road and there it is, in all its metallic, eight-legged glory. The iron arachnid, above, rests in a meadow adjacent to Barber Marina. “The man who owns this business loves art, ” says an anonymous employee. “I think someone from up north created the spider. I know it’s been here since before Hurricane Ivan (in 2004).” The spider can even be seen from Google Earth satellite. (Its coordinates are 30°22’10.00” N, 87°32’19.50” W.)

Red Hill Spring is best known by hikers, not drivers, so look closely or you could miss it. About 5 miles north of Stockton, on the side of state Highway 59, is a rock wall with water pouring out. Explorers, Native Americans, pioneers, and the curious have quenched their thirst from this artesian well for centuries. A plaque set in stone tells the story: “Dedicated to the wayfarers who, for unknown generations, have passed by this way and refreshed themselves with a drink from this spring and for those yet to follow.” 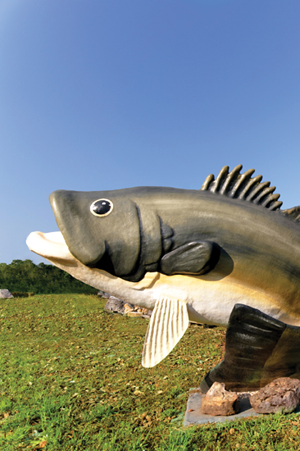 Both of Keith Kyser’s 10-foot-long man-made bass are taller than you.

He obtained the colossal catches of the day from the now-closed Styx River Water World and placed them along state Highway 59 in front of his Robertsdale business Kyser Pipe and Culvert. “I traded rocks for fish, ” he recalls. The mammoth fiberglass creatures are not as heavy as they appear, weighing about 300 pounds each. And one, above, can be yours for $2, 500 dollars, but only one; Kyser is hooked on keeping the other.

“The big green hand on U.S. Highway 98” sounds like a late-night show on the Sci-Fi Channel, and it looks like the Jolly Green Giant waving at Fairhope. But officially it is the Daphne Veterans Memorial, proud green fingers clutching the American flag.

Unveiled on May 11, 1993, at 2400 Old Spanish Trail, the statue’s inscription reads “For Those Who Answered the Long Roll.” It is dedicated to the memory of Marine Corps. Gen. Carl E. Mundy and American veterans. Many patriotic ceremonies, and other programs are held at the monument throughout the year because Daphne gladly extends a hand, a big green one, to those who have served. 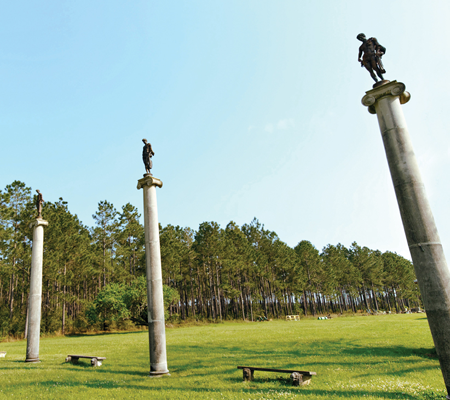 In a field off Elberta’s Leiterman Road, not far from the giant spider, four apparently mythological Greek or Roman god-like statues represent who knows what, in who knows where, for who knows why. Each figure stands on a 30-foot pedestal but what do they represent? The Court of Zeus? Oracle of Delphi? A memorial to Elberta’s greatest toga party? No information is available and calls to the Parthenon were not returned. We may never know why this fab-four homesteaded in Baldwin County and left Rome or Athens. It’s all Greek to me.

From Russia with Love, to Spanish Fort

Only in Spanish Fort could a Soviet watercraft be lodged on the beach without an international incident. But in front of The Original Oyster House, on Battleship Parkway, a Russian wonder the color of mustard mans its post. “Most people think it’s a submarine, ” the restaurant’s co-owner David Dekle says. “Actually it’s a Soviet rescue craft/lifeboat that functioned as a fully encapsulated ‘pod’ when dropped in water.” The Dekle brothers bought the vessel after discovering it in a Fairhope man’s front yard. They painted it yellow because as The Beatles say, “We all live in a yellow submarine.”