Both seasons of CMT’s “Sweet Home Alabama” gave America a glimpse at Southern courtship – reality television style. It also supplied some pretty funny clips to talk about around the water cooler. (We didn’t know the Bay had crocodiles, did you?) Set against the breathtaking Eastern Shore backdrops of Dorgan’s Inn and Oak Hollow Farm, the show shed light on all the beautiful places and people that the Bay has to offer. Two Robertsdale locals, cowboy Cody Harris and USA nursing student Tristan Smith, made it far in the competitions. Unfortunately, Harris was unable to wrangle Southern belle Devin Grissom’s heart, but Smith was ultimately the final pick for former Clemson quarterback, Tribble Reese.

In late August, Tim Cook was named the new CEO of Apple Inc., exactly six weeks before the death of Steve Jobs. The Robertsdale native reportedly received 1 million shares of Apple stock, valued around $384 million. Not bad for someone who comes from an L.A. town best known for its annual rodeo.

Downtown’s Club Atlantis closed its doors this past September. Club-goers will undoubtedly miss Atlantis’ exorbitant cover charges and entry lines that began so far away that one couldn’t even hear the bass system thumping. What won’t be missed, however, is the uneasy feeling of impending violence on any given night.

After Sunday services, Pastor Daryl Riley, of New Welcome Baptist Church in Grand Bay, informed Simone Moore that his time as minister of music was over. Moore, who ran for Alabama Senate in 2010, responded by using a Taser on the Rev. Riley, which then incited a skirmish in which Moore’s mother was stabbed by one of the  church’s deacon.

Say it ain’t so! Terror struck in the hearts of many Mobilians at the mere thought of having to do without the city’s most revered and oldest dining establishment, The Dew Drop Inn Restaurant. While the possibility of a Publix being built in the Old Dauphin Way Historic District had some residents salivating, the idea that they would need to use the diner’s location as a parking lot for the grocery store was not as appetizing as The Dew’s bright red hotdogs. Thankfully, owner Powell Hamlin has stood his ground, and the historic hot spot is safe for now. 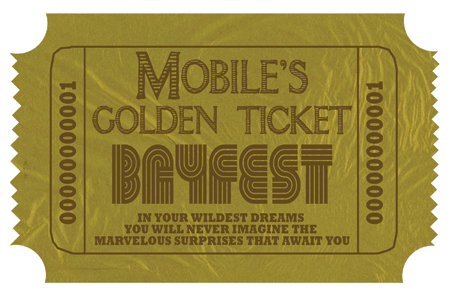 Each year, BayFest brings some of the nation’s top musical acts to the Port City. This year was no exception with Blake Shelton, Toby Keith, Duran Duran, Mary J. Blidge, Wiz Khalifa, 3 Doors Down, Shaggy, Ludacris and Korn performing on multiple stages downtown — all for the low, low price of $45.

In his first year at the helm, Mobile native Turner Ward led the Mobile BayBears to their first outright Southern League title since 1998. The team, a Double-A affiliate of the Arizona Diamondbacks, finished with an 84 – 54 record and earned the prestigious title of Baseball America’s Minor League Team of the Year. The 2011 BayBears showcased as many as 12 players expected to reach the majors, though none had a greater impact than first baseman Paul Goldschmidt, who led the minor leagues in homeruns (30) and RBIs (94) at the time of his call-up in August.

The City of Mobile decided to take on a battle that fashion police the world over have been fighting for years. In an attempt to reign in the city’s mischievous youth, the powers that be proposed a ban on sagging pants. Fortunately, the ordinance did not pass; otherwise it surely would have been one for the record books, right up there with prohibiting spitting in front of a lady and not being able to wear heels while walking over a downtown steam grate. 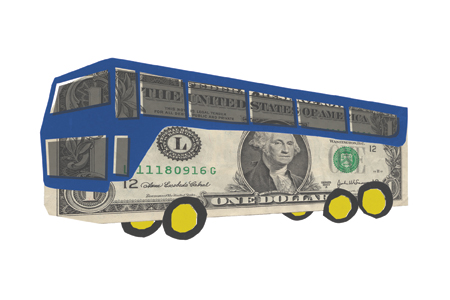 Occasionally, when something sounds too good to be true, it’s not. Such is the case with Megabus, which first drove its Wi-Fi-equipped vehicles into town last November. The company has long been popular across Europe and the U.S. Northeast but has now spread into the South. One can ride from Mobile to Atlanta — and back — for as low as $2.50, tax included.

Locals took a note from Wall Street protestors and formed Occupy Mobile to take a stand against corporate greed. But, the organization failed to take note of the city’s calendar and held their first rally during one of Mobile’s biggest events of the year, BayFest. As a result, only about 40 people attended — probably not the brightest idea.

Our future’s so bright, we gotta wear shades. The Bay area was all over the tube this year, but two instances really stood out. This past summer, Queen G’s got a makeover when chef Ludo Lefebvre took over in the kitchen for a day for his show, “Ludo Bites America, ” on the Sundance Channel. The spotlight also shone on The Hungry Owl, Wintzell’s Oyster House and The Brick Pit when Adam Richman of the Travel Channel’s “Man v. Food Nation” rolled into town last spring. The episode aired in late June.

Mr. Margaritaville himself, Jimmy Buffett, made a guest appearance on the hit CBS TV show, “Hawaii Five-O.” He played Frank Bama, a helicopter pilot and friend of John White, who had to fly the team to North Korea to rescue Steve McGarrett. And where exactly did the team go to find Mr. Bama? A bar, of course! 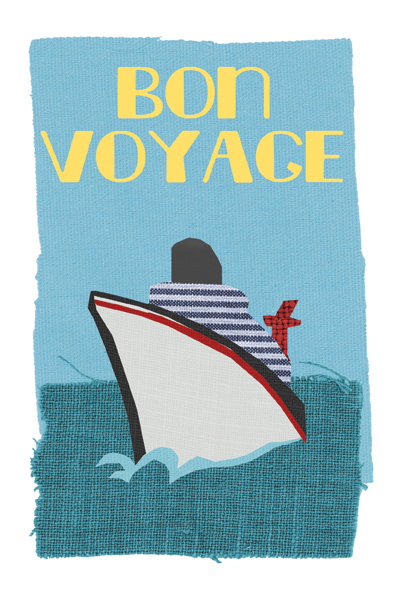 Unfortunately, Carnival Cruise Lines has jumped ship. The company, based in Doral, Fla., lifted anchor in Mobile Bay for the final time in October, despite consistently full ships during its six-year tenure here. Mayor Sam Jones has expressed confidence that another cruise line will fill the void. He better hope so, seeing as how the city still owes millions on the facilities built for Carnival. USA analysts estimate Mobile’s loss at $22 million dollars.

More than 16 local boutiques came together as a part of Mobile Fashion Week this past August to benefit Camp Rap-A-Hope and the Penelope House. During the week, fashionistas were treated to discounts at local shops and runway shows, one of which showcased three up-and-coming designers in competition for the prize of having their lines sold at Private Gallery. William Bradley took the top spot, and his designs are expected to be on racks in 2012. The competition was so fierce that the shop has also decided to carry lines from runners-up Taylor Yates and Caroline Smith in late 2012 and early 2013.

New Mobilians need not apply. The mysterious, cyber socialite, “Old Mobilian” has blocked all personal information and supposedly befriends only people who have established familial ties in Mobile. Upon clicking the friend request button, Facebook users are greeted with the message, “Sorry, this user already has too many friend requests.” A problem all Old Mobilians can sympathize with.

Best Spread Across the Bay

No longer will Mobile County residents have to span the Bayway to quash their morning beignet cravings. Panini Pete’s famous sweets and sandwiches are finally in downtown Mobile, on Conception Street near Bienville Square. 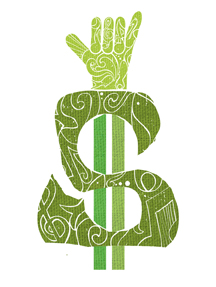 The Hangout Festival’s star-studded lineup brought out the masses to the sugary white sands of Gulf Shores. Headliners Paul Simon, the Foo Fighters, Widespread Panic and Cee-Lo Green drew an estimated 105, 000 party-goers. Gulf Shores officials said the concert was a $30 million boon for the area.

To honor Janice “Teko” Wiseman, long-time civic activist for the Bay area, who passed away in November. A cofounder of environmental advocacy initiative Keep Mobile Beautiful, Wiseman also led efforts for a 32-mile walking and bike trail in Baldwin County. Other notches on her civic-minded belt include her work with the Mobile and Baldwin County libraries and the Alabama Behind Local Education organization, which aimed to ease the school integration process in Mobile.

The Gulf Coast Tennis Challenge brought professional players Andy Roddick, Mardy Fish and Mike and Bob Bryan to the Port City for a few exhibition matches. Some local tennis players, including Mobile’s own father-son version of the Bryan brothers, Jimmy and Jay Weinacker, were even lucky enough to face off against the pros, with Jay recording an ace on the first point of the match. Unfortunately, there were no sightings of the lovely Mrs. Roddick, a.k.a. swimsuit model Brooklyn Decker. 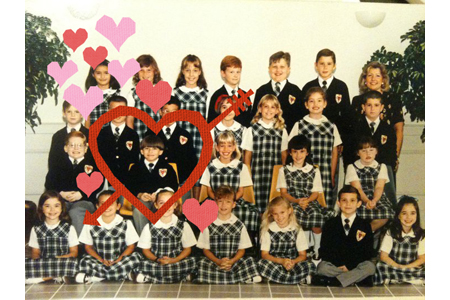 Reid Perry, of country group The Band Perry, has arrived. Since being featured in MB’s July issue, the brother-and-sister trio has been named New Artist of the Year by the Country Music Association and received a Grammy nomination for Best New Artist. Plus, their mega-hit, “If I Die Young, ” has gone triple platinum. Reid, bass guitarist and little brother of the band’s lead singer, attended St. Paul’s and Cottage Hill Christian elementary schools and was quite the heartthrob among the young girls in Mrs. Lambert’s class. His class picture, above, shows why.

Where’s the beef? Apparently it’s in the George Wallace Tunnel. Traffic was slow moo-ving through both tunnels one Tuesday morning after an 18-wheeler carrying 109 cattle was overturned just west of the Wallace. Twenty-five of the livestock were injured or killed in the accident, while the rest were sent to a stockyard in Robertsdale. All the humans involved in the accident made it out OK.

Mobile is finally on its way to having a dog park where pups can roam freely off their leashes. The city approved plans for the 4-acre, fenced-in space inside Medal of Honor Park. Now, it’s left to residents to come up with the $63, 000 to fund the project. To donate, go to mobiledogpark.org. 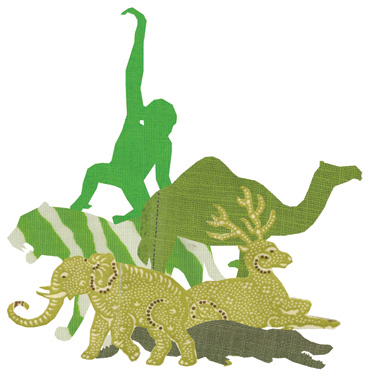 “The Little Zoo that Could” is moving on up. The Alabama Gulf Coast Zoo announced plans to become “The Amazing Green Zoo, ” and relocate to a bigger and better facility north of the Intracoastal Waterway on County Road 6. They are aiming to become the world’s first self-sustaining zoo and hope to have the project completed by April.

Worst Economic News (and it ain’t even close)

The Air Force’s decision to award the tanker contract to Boeing Co. over EADS kept the Bay area from becoming an aerospace epicenter. EADS had plans for a $600-million-dollar plant, and many suppliers were expected to follow. Alabama Sen. Richard Shelby felt that, “Only Chicago politics could tip the scales in favor of Boeing’s inferior plane.” 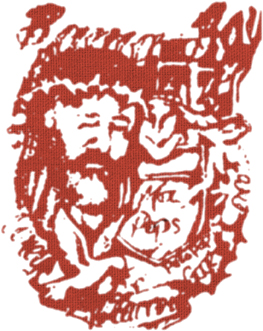 Jesmyn Ward, currently an assistant professor of creative writing at the University of South Alabama, won the National Book Foundation’s award for fiction. Her second novel, “Salvage the Bones, ” pits a rural, poverty-stricken community against Hurricane Katrina. This poignant and bighearted tale is well-deserving of such lofty praise.

Go big or go home, they say, and the Alabama quarterback and St. Paul’s alum A.J. McCarron definitely “went big” with the dinner plate-sized inking in the middle of his chest. All of the staples of a questionable tat are there: a weeping visage of Jesus, some sort of family crest, multiple family members’ names and a branch-toting dove, all crowned with “Bama Boy” in script.