The first question everyone, myself included, asks Ray French about his homegrown tobacco: “Is that even legal?” And while U.S. federal laws state that French’s hobby is OK as long as the product is not sold or used for barter, that doesn’t quite eliminate all the complications of growing one of history’s most maligned plants in your backyard. “There are always some awkward moments, ” he admits. “Like saying, ‘Hey kids, watch out on that zip line. You’re killing my tobacco plants.’”

French is a professional horticulturist who became a tobacconist after Cool Springs Press approached him in 2010 about writing a do-it-yourself book on tobacco production. Already an avid enthusiast of organic gardening, French became particularly interested in organic tobacco due to the additives used in most commercial products. The lack of those chemicals is one of the main benefits, he says, to growing your smokes instead of buying them.

But French’s passion for agriculture of all kinds – the greenery he seems proudest of as we tour his artsy Fairhope home is a fly-eating pitcher plant which was his sons’ idea — is just the latest manifestation of a family tradition that began with French’s great-uncle, John Frederick Duggar. Duggar started the Auburn University Old Rotation Farm Experiment more than 100 years ago and eventually became the dean of agriculture at the school. His test tract remains one of the state’s most fertile pieces of farmland. 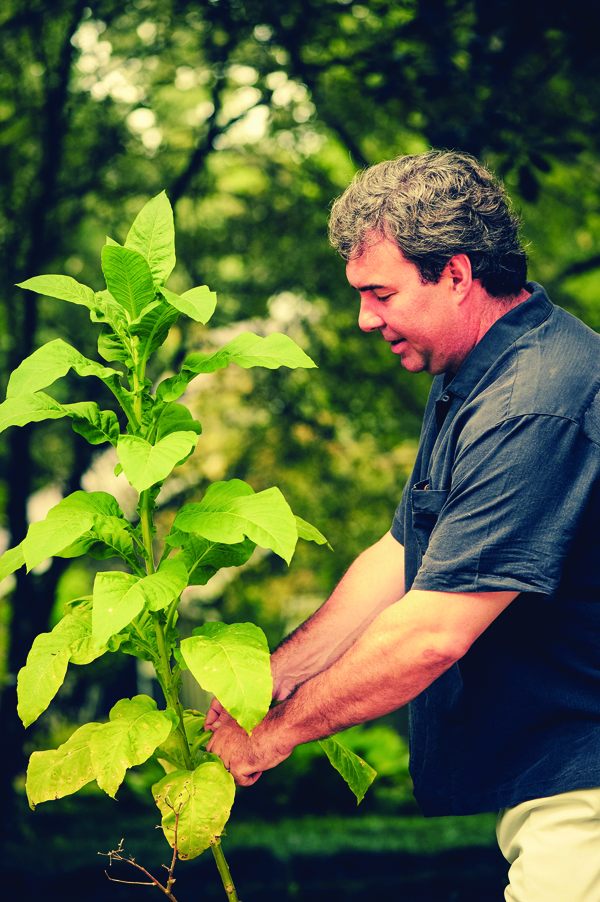 In his book, “How to Grow Your Own Tobacco: From Seed to Smoke, ” French explains the topic in terms even a lifelong urbanite can follow. Whereas great-uncle Duggar likely ordered his seeds from mail-in catalogs, French suggests beginning the process online. A number of niche websites offer most every variety of tobacco seed: Lizard Tail Orinoco, Indian Ceremonial, Havana, Kentucky Burley. For would-be local farmers, French notes, “What I would recommend for anyone in this area, and which did best for me here, are the Cuban and Virginia strands.”

Once a grower is armed with seeds, the process is similar to growing tomatoes, and soil is key. The plants should begin in a tray or small pots. French considers a sandy loam with a minimum five percent organic matter ideal for tobacco, and he recommends supplementing the Bay’s soil with 20 to 25 percent organic matter, which will thin out once the ground is turned and the materials break down.

The author advocates starting soil preparation in the fall and moving the plants outside in the spring, when a morning frost would be as unlikely as a jubilee in January. The entire seed-to-harvest process should take approximately 90 days. At five or six weeks, the sprouts will be ready to carefully transplant into a well-drained, sunlit area of the garden where they’ll need between 50 to 80 additional days before harvest.

As the leaves reach maturation, they will begin to yellow and pucker slightly. Give them a few more days, until they attain what French describes as “a golden glow, ” and then cut them off at the stalk. At this point, they’re ready to dry.

The three-step drying procedure takes a few weeks. After allowing his leaves to yellow for a day or two, French hangs them on a laundry rack in his office for two to three weeks. The last phase of drying the plants, called “ordering, ” requires the farmer to mist the dried leaves with distilled water so that they retain some of their malleability. The final step, curing, lets the tobacco age and develop its flavors. After hanging for a minimum of five to six more weeks, the sugar in the leaves ferments, and the plant is finally ready to smoke.

One option is to grind the tobacco and use it for cigarettes, difficult even if you do have an automatic roller. French, who only smokes “every now and then, ” suggests setting aside some of the best leaves for cigar wrappers and using the less than immaculate product for filler. Basically, he says, bunch the leaves together on top of the wrapper and roll. “It’s not hard to do. If you can make a taco, you can roll a cigar.”

Some people, when they talk, are reminded of stories, and their words meander down a path of tangled anecdotes about their childhood dog or the line at the bank the other day. Kelly Cummings’ tales always lead back to recipes. He relives each step of the boiled royal reds he prepared with Boursin cheese last Saturday at the beach, the award-winning deer and Conecuh sausage concoction that won this year’s Senior Bowl Tailgate Challenge, and the bacon, sausage and brown sugar bites he serves up during Mardi Gras season. Cummings makes them all sound as easy as instant oatmeal and so decadent that they might truly be to die for. I’d at least think twice about it.

Today the chef-turned-real estate agent is fixing beef jerky, a humbler dish than usual, with the same unmistakable pride and enjoyment that goes into all of his dishes. Though he prefers a tenderized deer back strap, he’s making do with a succulent flank steak, what he calls a London broil.

Cummings begins the process by mixing two tablespoons of prepackaged seasoning with a tablespoon and a half of cure, a sodium-based preservative that helps the jerky keep longer and cook easier. With a curved knife blade, he chops and cuts the mixture to “release the flavors to their fullest.” He then takes a well-sharpened, serrated knife to the beef and trims every bit of fat he can find. Cummings has won a litany of cook-offs with his cooking team, The Diesel Pushers, and at no point is his proficiency in the kitchen more impressive than when he is cutting through the slab of meat like it is grape jelly. His knife moves with the grain, slicing the steak into half-inch strips.

After the meat is carved, Cummings tosses it in a bowl with the cure-seasoning blend until the slivers cease to stick to each other. Next, he pours in half-ramekins of Worcestershire sauce and Dale’s Seasoning, plus a heavy splash of Corona beer. This is the most fun step, Cummings explains, because you can experiment with whatever seasonings you desire: fresh jalapeños, lime, tarragon and teriyaki sauce are a few he lists. He mixes it all together before putting the meat into a quart-sized Ziploc bag. He carefully pours the remaining liquid from the bowl into the bag, presses out the air and seals it. The meat then marinates in the refrigerator for 24 hours. Once it’s done, Cummings removes each strip and places them one at a time onto the dehydrator’s trays like a giant laying juicy, brown sod. He’s smiling as he does so.

“The problem most people have when they get in the kitchen is they think they’re going to screw something up, ” he says. “You’re not going to screw anything up. It’s not rocket science. This is what our forefathers did for years; they cured meat.”

Once he has lined the beef over four trays, Cummings stacks the circular disks and places them onto the dehydrator. He plugs in the machine, sets it to its maximum heat of 155 degrees, and just when his tone suggests he’s ready to proclaim that kingfish of all infomercial mantras  — “Set it and forget it!” — he catches himself.

“Actually there is a trick I’ve learned: About every hour, take the top off and rotate the trays. That’s all. Then, as pieces look done, start pulling them off. After three or four hours, you’ll want to start looking at it hard.”

Most of the recipes Cummings recites from memory sound dizzyingly complex, but this whole procedure looks difficult to botch even for me. “The best tip I can give you, ” he says with a mouthful of jerky, “is to play around with it and have fun.”

In his book, available at Page & Palette in Downtown Fairhope, French makes a point to mention the many risks associated with consuming tobacco. Page 18 even displays a surgeon general’s warning. “The purpose of this book is not to introduce new people to tobacco, ” he writes, “but to offer a homegrown alternative.”