Of the 2.18 billion pairs of shoes sold in the United States in 2011, 98.6 percent of them were manufactured abroad. The American Apparel and Footwear Association estimates that in the same year, every American man, woman and child purchased approximately seven pairs of shoes, spending an average of $212 on all seven pairs.

Fairhope artist Jim Tripp is trying to reduce the number of shoes that the average American buys to only one locally made pair that lasts for years and years.

“I’ve always worn flip-flops in the summer. Once, I was walking around the Bay collecting things for my art, and I stepped into a puddle of run-off. It sucked away my favorite flip-flop. I tried to retrieve it, but I couldn’t, so I ended up spending $40 for a pair that didn’t last a season. Then, I spent $40 on another pair, and they lasted even less, ” Tripp says.

Frustrated, he set out to create his own footwear. “In Mexico, they make their own sandals out of recycled tires, ” Tripp says. “I did some research, found some designs, and after two years of testing, I now have this product.” Since the research and development stage, he has created more than 300 pairs of sandals for local customers, taking the indigenous Aztec design and fashioning his own version with contemporary materials.

“It’s a three-layered sole.” He holds up a sheet of black rubber that he has doctored. “The sole topping consists of a structural layer of polyester mesh with a nobby-textured neoprene rubber surface that sheds dust and moisture, provides superior grip in wet conditions and massages the foot.”

Tripp says that the soles will last virtually forever, but if they do wear out, he’ll replace them for a nominal fee. He customizes each sole to a tracing of the customer’s foot, pointing out that, like a fingerprint, everyone’s foot is different.

Tripp doesn’t own a car or a brick-and-mortar shop. He operates his business by walking around Fairhope, toting a backpack full of nylon straps in a rainbow of neon pinks and greens, neutrals and earth tones, and a sample of the rubber soles.

The care and time that he puts into them are what makes Tripp’s sandals special. Still, he hopes to expand his business and be able to produce more shoes more quickly while still maintaining his standards of quality and personal relationships with his customers. “I can do this here. It might not grow like the companies that mass produce shoes. But I’d like to be able to support myself, ” Tripp says. “I’m trying to live a simple, sustainable, self-sufficient, minimalist life, not based so much on consuming.” 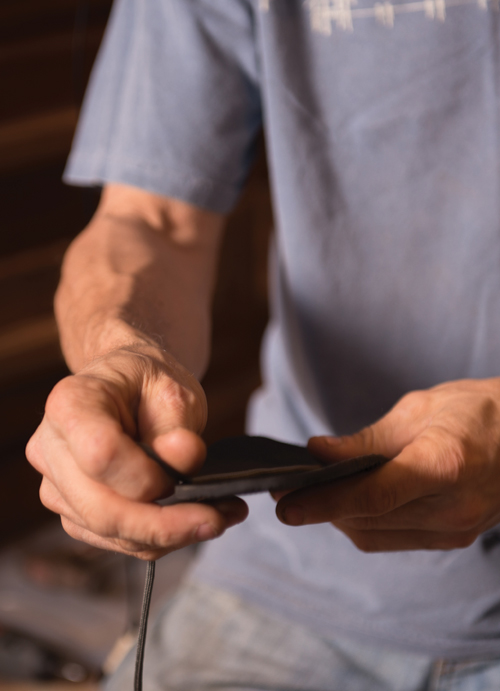 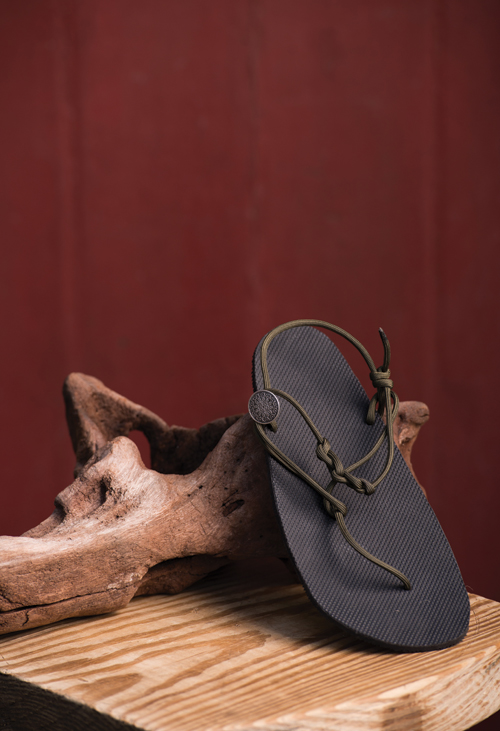 >>The base price for a pair of sandals is $67, which includes custom soles and a choice of strap and buttons. Fabrication takes anywhere from one day to one week. “Like” Tripps Sandals on Facebook or check out trippssandals.com for more information.