Sonja Faye Bivins and Donald Orrin English were united in marriage on October 8, 2016 at Ebenezer Baptist Church of Cottage Hill, the place where they first met. Their pastor, Rudolph Overstreet, D.D., officiated. The ceremony included a prayer by Rev. Horace Carter and a scriptural reading by Rev. Tim Hall and his wife, Judge Shelbonnie Hall. Terry Hazzard and Yvonne Matthews provided music for the ceremony.

The bride is the daughter of Bettye Bivins and the late Pastor John Bivins, Sr. The groom is the son of Lelia English and the late Walter English, Sr.

Escorted by her brother, Tracy Bivins, the bride wore a Watters design personalized with embellishments by Christal Hall of Seams to Fit. Hall also created the bride’s cathedral-length veil. The bride’s hair stylist and makeup artist was Zella Edwards. The bride carried a bouquet of colorful roses created by florist and decorator Sherryll White, who designed all of the floral arrangements for the ceremony and reception.

The groom chose his brother-in-law, Henry Davenporte, as his best man. Groomsmen were Phillip Davenporte, Pastor Roy Powell and Michael Showers. Omarr Gullap, grandson of the groom, served as the junior groomsman. The ring bearer was Jeremiah Bradley. The bride announcer was Elijah Agee, and the usher was John Young.

Following the ceremony, a reception was held at the beautiful Bellingrath Gardens. Naman’s Catering provided a scrumptious buffet. Flour Girls Bakery made the three-tier wedding cake, adorned with colorful roses like those in the bride’s bouquet. The groom’s cake was created by Nothing Bundt Cakes of Jackson, Mississippi. Music at the reception was provided by Ronnie Suggs.

Sonja and Donald were overwhelmed by the love and support shown to them by their families and friends who traveled from near and far to share in their special day. 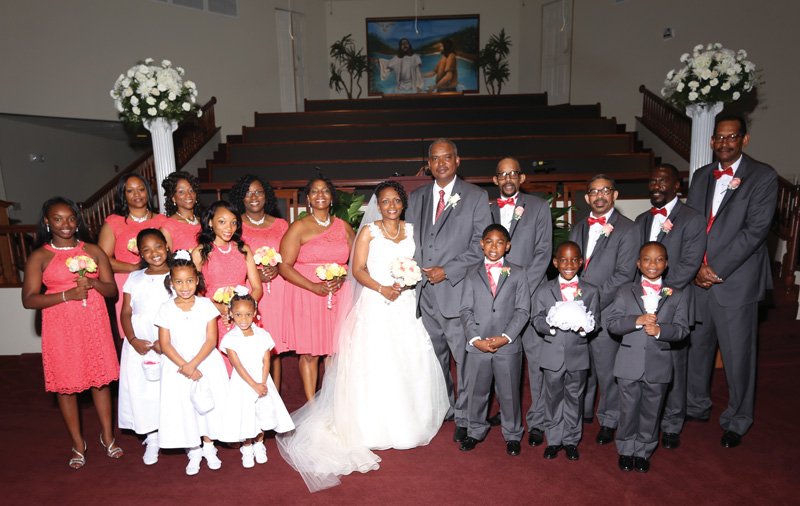