Molly’s family’s houseboat  wasn’t as nice as the other boats docked in the cove just off Fowl River, but for the entirety of her 7 years, it had been her home. She listened to Christmas music on the radio as she dropped breadcrumbs into the water. The soft waves lapped against the hull of the boat, gently keeping rhythm with the music. It was unseasonably warm, even for the Gulf Coast, and Molly found it difficult to get in the Christmas spirit.  Even when her parents took her to see the lighting of the Christmas tree in Bienville Square, Molly had a hard time enjoying herself.

Her father noticed the long face she was wearing. “The fish are going to be too fat to swim if you keep feeding them like that.”

Molly didn’t answer. “What’s the matter?  It’s the day before Christmas and you’ve been a very good girl this year, ” he said.  It was true.  Molly had made the honor roll and had received her school’s citizenship award.  Her father was so proud, he framed it and hung it on the wall.

“I’m not in the mood for celebrating, ”she replied.“It just doesn’t feel like Christmas.”

It wasn’t only the warm weather that made it hard to get into the Christmas spirit.  Their boat was too small for a real Christmas tree. Instead, a plastic tree sat in a flowerpot on their table. “It’s not the same as my friends’ houses, ” complained Molly. “We don’t have a house, or a chimney. And we don’t even have a real Christmas tree.  Santa will never find me.”

Her father sat down beside her. “If you have a kind heart Santa will find you.  He’s never missed a year, has he?” Her father was right, but Molly still worried.

“Maybe we could give Santa a little help, ” he said with a mischievous grin.  Molly knew that look. It meant that her father had a plan. “All Santa needs is a little light to guide the way.”

In the North Pole, Santa and his elves were busy preparing for their departure. Their course was carefully charted.  Mrs. Claus packed provisions for their busy night, including bug spray to use on his route between Louisiana and Florida. He always came home itching and telling stories of mosquitoes the size of golf balls. The Delta proved to be treacherous for the reindeer, but if the mail could be delivered to Magnolia Springs by boat, they could deliver presents by sleigh. 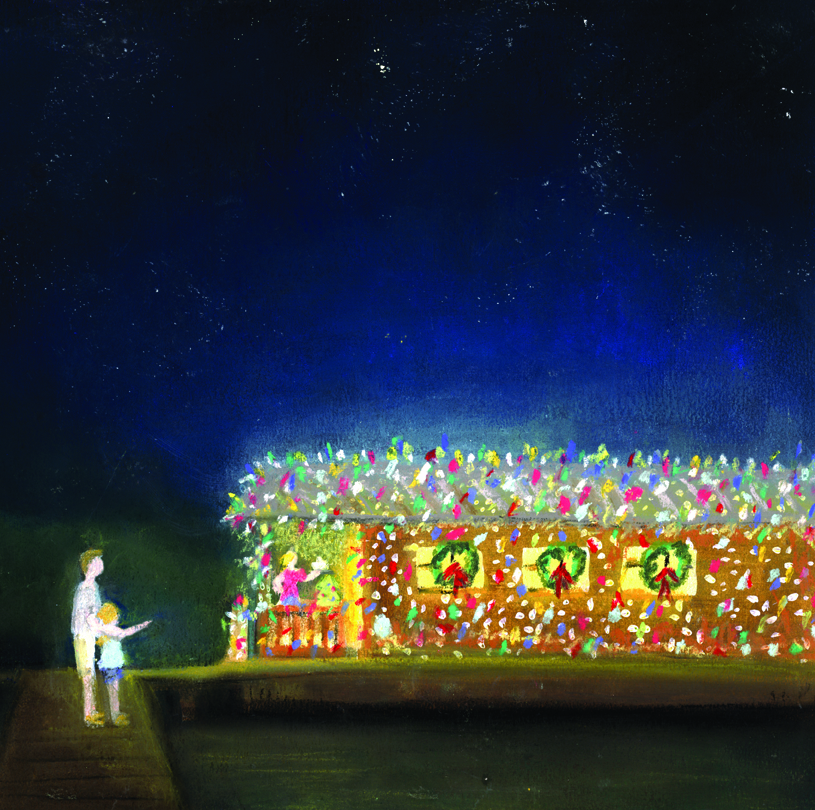 It was dark out when Molly and her father finished their project.  The houseboat was now wrapped in hundreds and hundreds of Christmas lights of every size. Molly stood on the pier waiting to inspect their work. “Turn it on, ” she yelled.  Her father plugged in the lights and they began to flash and sing. Their neighbors came out onto their decks to see the spectacle. Molly jumped up and down with excitement.  “We’ve got more lights than Bellingrath Gardens!” There was no way that Santa could miss the boat now.

Molly’s mother called to them from inside, “Fresh beignets!”  She always served them with hot chocolate and extra powdered sugar. After Molly had her fill, she carefully arranged a stack on a plate for Santa.

Her father loved nothing more than to see her happy.  “You best get to bed, young lady. Santa will be here soon.”

Sure enough, the glow from the boat radiated through the trees. “That must be our friend Molly, ” said Santa, pointing toward the light.

But as Santa’s sleigh began its descent, the fog rolled in off the water making it difficult to see. The reindeer swayed and swerved.

Hearing the noise from above, the turtles all retreated into their shells.  One of the old alligators saw the sleigh headed toward them. “I can’t look, ” he cried, then sank below the surface of the water.

They’d had rough landings before, but this one was different. Instead of landing with a thud, they slowly began to sink. Rudolph lifted his legs, which were heavy with mud.  Spanish moss hung low from the trees tickling the tops of their heads.  Rudolph rallied the other reindeer and on his count they tried to move the sleigh.

Soon, it became obvious that they were stuck in the murky waters of the Alabama bayou.

The clock was ticking and if they didn’t start moving soon they would never be able to deliver all of their presents before morning.  Exhausted, they all sat quietly and thought.

The water creatures were scared by the initial crash, but in the quiet of the night they slowly began to creep toward the sleigh, curious to investigate their unexpected visitor.  A white egret, whom the animals all called Great White Feather, flew low over the water surveying the damage. With one loud cry he sent word to the other animals that their visitors were no threat. 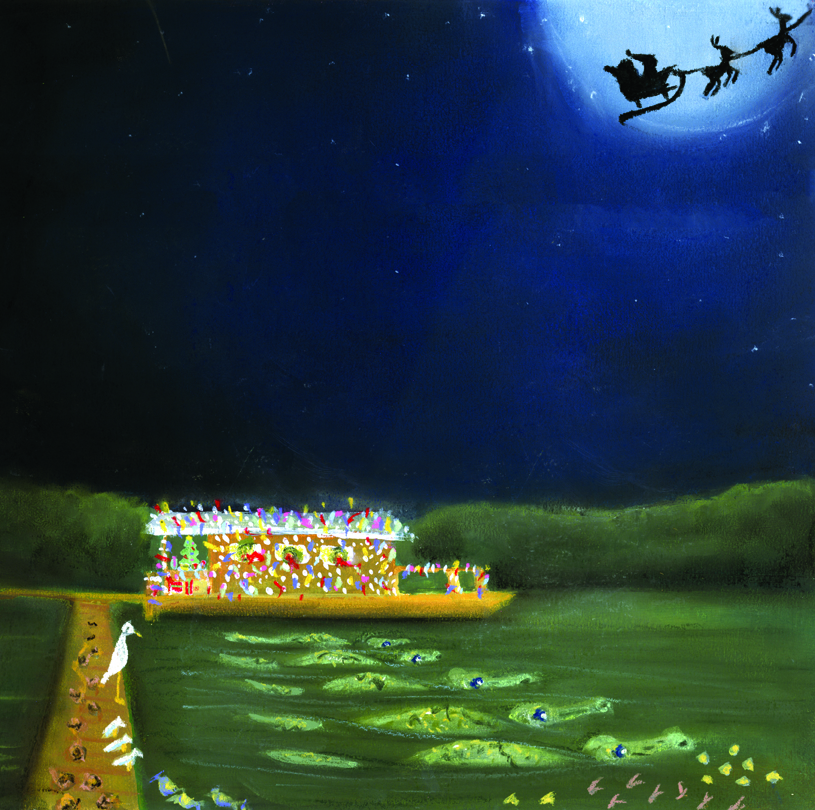 Word began to spread. The shrimp tried to swim to the surface, but they were overrun by the flounder who began jumping out of the water trying to catch a glimpse of the sleigh.  The cranky crab was annoyed by all of the commotion.  “Keep it down!” he cried.  But no one listened.  They were all too excited.

Santa stood up to greet Great White Feather, who was now perched on an old piling.  Santa looked embarrassed.  “We seem to be stuck.  Could you lend a hand?”

Great White Feather sprang into action coordinating the other animals.  It would take the help of all the creatures, both great and small, to get them free. The shrimp were the first to volunteer.  “We might be small, but we are a mighty force when we work together, ” one of them said.

Great White Feather agreed and put them in charge of burrowing through the thick mud that was holding the reindeer hostage. When they were done, the biggest alligators on the river, lined in five rows of four, swam beneath the sleigh. Together, in a synchronized swim, they floated the sleigh down the river using the glow from Molly’s boat to guide them on.

When they arrived at their destination Santa gave the animals his heartfelt thanks.  “There’s nothing like a little Southern hospitality, ” he said. “Christmas would have been ruined without you.”

Santa then worked quickly unloading the gifts. He held a special place in his heart for children like Molly. Every year, when he read her letter, he was always pleased to see that in addition to asking for what she wanted for Christmas, she told Santa what she wanted for others.  He left an extra gift as a reward for her thoughtfulness.

Molly was awake bright and early the next morning.   Presents were piled so high that the little table tree could barely be seen. Her squeals of joy awoke her parents.

“I told you he would, ” her father said with a smile.

Great White Feather watched from afar. He was excited to report back to the other animals that their teamwork paid off. Nine sets of muddy hoof prints tracked across the pier were the only evidence of Santa’s Christmas Eve adventure.