Who would have thought that a character who only ever uttered three words would become iconic? Certainly not Andy Schmidt — and he helped bring that character to life. “The fact that people know who Star-Lord is now and there are shirts in Wal-Mart that say ‘I am Groot’ on them is kind of ridiculous to me, ” Schmidt admits in awe. “And I had some part in that.”

Back in 2004, when he was an editor at Marvel Comics, he had an idea: He wanted to bring an old, forgotten comic back to life. Not everyone thought it could succeed, but Schmidt pitched it anyway. Some skepticism notwithstanding, he got his wish. “Annihilation, ” the reboot that would ultimately become the popular “Guardians of the Galaxy, ” was born. (Well, reborn.)

In 2014, years after he’d left Marvel, Schmidt got a phone call at his home in Kentucky. The blockbuster was premiering in Los Angeles, and as one of the core team members who brought these characters to the forefront, he’d scored a ticket to the red carpet. As he brushed elbows (“more like spotted from across the way, ” he clarifies) with some of the biggest names in Hollywood, there was only one review he cared about.

“Going to that movie, I was nervous. I’d spent all this time away from my wife working on these projects and this was like, ‘This is what you get.’ So I’m sitting there next to her just thinking, ‘I really hope she likes it.’ During the opening scene, when Star-Lord is running through the cave singing, I looked over, and she was laughing. I felt a lot better.”

This story truly encapsulates Schmidt: persistent, personable, outgoing, and — even after having his name attached to mega comics such as “Star Trek, ” “X-Men” and “Captain America” — humble. 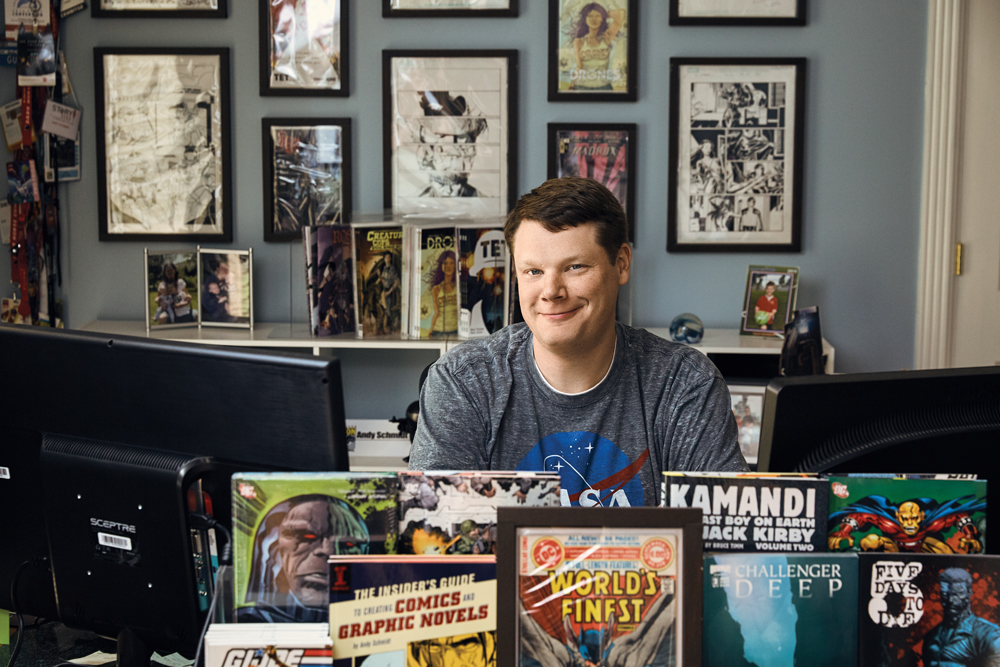 It all started one summer during college when Schmidt took an internship at Marvel in New York. “I’d always had a writing bug and when I went to college, I thought I might go into filmmaking. My brother is the one who mentioned that Marvel had an internship program, and I’d always wanted to live in New York. So those two things went hand in hand, ” he shares. A few years later, he would return as an assistant editor and work his way up to editor.

“The editor’s role is often hard to describe, ” Schmidt explains, “but it basically has two functions. The bare bones function is you’re a project manager for about 20 projects a month. The much more interesting and fun part of the job was the creative aspect. We would talk with the writers and artists about the storylines, what ideas we had, and projects would come up in a variety of ways.”

In 2007, after working on projects, such as “The Avengers” and “Iron Man, ” he left Marvel and decided to take a year off. He took on the role of stay-at-home dad with his wife and newborn, and he launched his own business, Comics Experience. The online school guides comic enthusiasts through every aspect of the business, from art and storytelling to marketing and publishing. Comics Experience even has a publishing line for students to submit their books. “For me, it’s exciting to be working with new, innovative projects and then also be able to work with characters I’ve loved since I was a kid, ” he says.

Schmidt then spent a few years at IDW Publishing, then at Hasbro, working on the relaunch of G.I. Joe, as well as branding for movie tie-ins of “Star Trek” and “Transformers.” Eventually, he decided to solely focus on Comics Experience and freelance consulting. So he said goodbye to the corporate life and hello to full-time business ownership.

“Comics Experience combined my love of comics and my love of teaching. I have worked with a lot of big name guys, but I really enjoy helping cultivate new talent and assisting them at getting their feet in the door, ” he shares.

In 2016, Schmidt returned to his alma mater, Bayside Academy in Daphne, to be inducted into the Bayside Hall of Fame. “I got to have a discussion with a select group of students [while at Bayside for the induction ceremony]. That was the best part, ” he says with a chuckle.

And for him, seeing the changes on campus and reconnecting with the school was great, but it was the chance to meet the next generation that stuck out to him. “The absolute high point was when students presented me with an award that they had designed and created themselves. The award from the school was nice, but a lot of real work and thought went into the one from the students. I hung that one in my home. That was really moving and so unexpected.”

Comics Experience definitely reigns supreme as his favorite project to date. But if he had to pick a second? “I think my favorite is the ‘Annihilation’ project that led to ‘Guardians of the Galaxy.’ That project and I started out together, and we went our separate ways. And it flourished, and I flourished, so we’ve got this parallel thing going on. I can look over there and say, ‘It’s pretty cool that I worked on that.’”