Bobby Abruscato has a fish tale or two. After 50 years of angling, the legendary local fishing guide shares his best tips for reeling in your limit this summer. If you still have no luck, make it simple and schedule a day out on the boat with the A-Team Fishing captain himself. The guy never comes home with an empty cooler.

I learned to fish when I was 6 when my family moved down here from Chicago. We started going to Dauphin Island and fell in love with it. So, actually, my dad and my brothers and I all learned together. We taught ourselves. We spent most of our summer days fishing.

I didn’t know exactly what I wanted to do when I was in school. I started taking people out fishing as a summertime gig and woke up four years after I got out of school and realized I was a full-time fishing guide. I’m still learning. I’ve been fishing for 50 years, and you really do learn something new every day.

I still fish as often as I can! Depending on the weather, five, six, seven days a week. And from May on, it’s wide open!

From about March to October, I’m down at the Island. Then, based on the weather, about the end of October, I move up into the Delta and the rivers. I’m up there through the winter.

June is the best month of the year for everything! The weather is stable, and the fishing is great everywhere. Not only do you have the inshore fishing, which is what I do, but it’s also our only recreational snapper season.

During the summer, the best places to fish are the four “r’s” — rigs, reefs rock piles and wrecks. Any structure in water deeper than 8 feet is a good spot during the summer.

Speckled trout and redfish are the two main species I target. That’s what the majority of my clients want to catch. And we catch other species, like sheepshead and bycatch. Speckled trout has a certain mystique about it. Particularly here in the northern Gulf Coast, it is the inshore game fish.

A perfect day for me would be wade fishing with a group in the morning. That’s where we actually get out of the boat and into the water. Our days start at safe light*. That’s usually about 5:30 a.m. in the summer. Then back in the boat by 8 or 9 a.m., quick break, then (particularly during June) we do a lot of deep-structure fishing (such as gas rigs) through the rest of the day, while the sun is up. This deeper water is about 10 to 14 feet in our area.

*Safe light is the morning time when you can run the boat safely — it’s not pitch black. You don’t want to be running (the boat) to where you want to fish when the sun is really starting to come up. You need to already be fishing.

In June, in the early morning, the surface fishing and shallow water fishing are better. But, by the time you have to put your sunglasses on, it’s time to move to deep water. By July
and August, don’t even waste your time with shallow water; it’s just too hot and the fish aren’t active.

However, when you start getting into the summer months, you really want to have live bait. Year round, if you’ve got a live shrimp on the end of your line, you’ve always got the right bait. It will almost always outproduce any other type of bait, natural or artificial, for speckled trout. You can also use croakers, but you never go wrong with live shrimp.

There’s no way it can be 100 percent skill, because the fish also have to cooperate. But the more you do it, the higher the percentage is skill and the less is luck. I don’t care how good you get, there is always the luck factor!

Of course, there are days the fish are biting better than others. And some days, no matter what you do, you’re gonna have a struggle. But most clients understand that. If they see you are working hard and doing everything that you can do, they realize that some days not much is going to happen.

I’ve never had a trip where we got nothing. You just keep moving around, trying different stuff and eventually you get something. I remember one time catching only two sheepshead. Weather is the biggest factor, and usually I can tell even a day before whether it’s going to be a good day or not.

Preserving What We Have

I’m absolutely a believer in limits. I wouldn’t mind seeing the limits drop a little lower even. Most of what we do is catch and release. I know what would happen to the fish population if everyone kept their limit every day, so I always encourage people to just keep what you’re going to eat fresh and throw the rest back. You can always go fishing again!

They didn’t used to have limits on trout or redfish. Then, not long after they put in some limits, the fishing just skyrocketed. It just got so much better it was insane. It has been on a curve, and it looks like it’s starting to level off. The last couple of years it has slowed a little bit. It’s not a direct downturn, but the past two have been off years for me and a lot of other people. I think we had a good spike in the fish population after the oil spill when we had the whole summer where no one fished. That took all the pressure off those fish, and they just blossomed. Now it has kind of caught back up.

People ask what I like to do when I take time off. I travel to tournaments; I enjoy that. I go fishing. 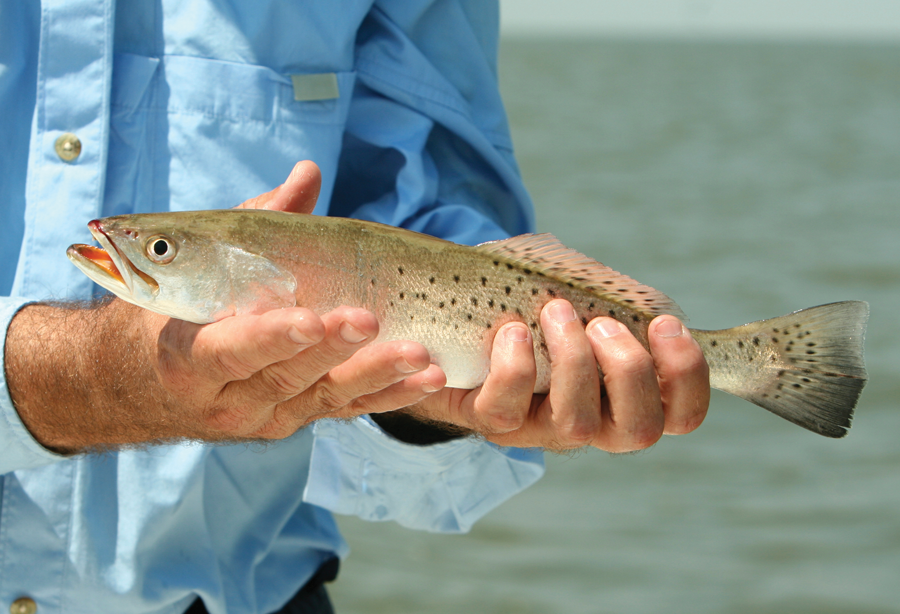 SPECKLED TROUT
In June, speckled trout fishing is off the chart in both shallow and deep water. Try early morning on the beaches on both sides of Dauphin Island and the Fort Morgan peninsula. Mullet imitations (like mirror lures) work like a charm, and the best bite will always be just as the sun is rising. Once it gets bright enough for sunglasses, move to deeper water. All of the structures in Mobile Bay and the Mississippi Sound in water deeper than 8 feet hold trout. Live bait, such as shrimp and croakers, is a must during June. You’ll need to learn how to rig a slip cork to be effective with speckled trout in deep water. Set the depth of the bait to the lower third of the water column and allow it to drift freely with the tide along the structure. If you are going to keep some fish to eat, be sure to get them on ice immediately after catching them and keep them iced until you are ready to clean them. The smaller 14- to 16-inch speckled and white trout are the best for eating.

REDFISH
This is similar to speckled trout fishing in that both the tackle and baits remain the same. I target redfish more in the winter because, usually during the cold months, the trout are less cooperative. Typically, a shrimp imitation under a cork will out-produce any other bait. I like to fish the small creeks and bayous that line the Bay and Mississippi Sound, and I especially like the ones that have shell bottom. The reds forage over the shell for small crabs and shrimp during the winter.

RED SNAPPER
The Alabama Gulf Coast is the undisputed world capital of red snapper fishing. There are literally thousands of man-made and natural reefs off the coast that are home to red snapper. Unlike trout, I prefer to keep the bigger snapper, mostly because we are currently limited to only two per person. Live bait will entice the bigger snapper to bite, so I make sure that we have some live pogies, white trout or pinfish on the snapper trips. Using circle hooks for snapper requires that you resist the urge to “set” the hook when you feel a bite. Instead, just start reeling until the line comes tight and don’t stop until the fish is in the boat. The federal and state regulations pertaining to snapper are constantly changing, so be sure to check the status of the current ones before you go on your trip.

Click here to find out how Bobby Abruscato and his wife, Kim, cook their catch.