Connie Simpson does not travel by floating umbrella,  but otherwise, she’s a regular Mary Poppins. For more than 30 years, she’s breezed in and out of 25 homes and passed her love and wisdom on to dozens of families. But for Connie, it’s all in a day’s work.

With many aunts, uncles and cousins, there was no shortage of nannying practice for Simpson growing up. So when she needed a way to support herself and her infant daughter, she supplemented her work in the public school system and took baby nurse jobs in the area. Pretty soon, she began working with influential Mobile families, such as the Altmayers and Austills, teaching them to navigate the first few weeks of parenthood. Her name spread faster than she could have imagined, and before long, everyone wanted “Nanny Connie” to help with their newborns.

Becoming Nanny Connie was not just a job, though — it quickly became her way of helping others take charge of their lives. “My aunt, who introduced me to being a baby nurse, was determined never to cook for the family or anything like that. She’d say, ‘You’re there for the baby!’” Connie says with warmth and passion. “But when I saw the need for the nutrition for the mom to produce better quality milk, I went from just caring for the baby to actually teaching the parents, ” she shares. From nutrition to sleep-training to diaper hygiene tricks, she knows it all and shares it freely in every home she enters.

As her daughter grew up, Simpson took jobs outside of Mobile, traveling around the country to meet more families and staying on for longer periods of time. Around 2005, members of the “one percent club, ” as she calls them, began calling on her. She started with the powerhouses of the business world, working with the family who owns Hyatt Regency, the president of the Chicago Mercantile Exchange, foreign dignitaries, news anchors for major New York stations, and the list goes on.

“I teach them the foundation, ” Simpson says, “You can have all the book sense in the world, but you can’t exist without a good foundation.” Then, she shifted focus and began answering the calls of Hollywood’s one percent. That’s right: Nanny Connie has been a trusted family member to the likes of Justin Timberlake, Emily Blunt, Brooke Shields and Matt Damon. But she’s never let that distract her from her job. “I never entered the house starstruck, ” she says in a matter-of-fact manner. “I tell them when I go, ‘Don’t ask me about your movies — I have no idea!’ Especially the Bourne ones. I don’t know about any of that!”

Now, Nanny Connie has a new purpose. Her “Be the Parent” media campaign will help families everywhere take advantage of her three decades’ worth of expertise. From YouTube interviews with her celeb clients to a book series to an exciting collaboration with Fairhope native and popular designer MB Greene, Nanny Connie has huge plans in the works. At print time, most of those plans are still hush-hush, but check on mobilebaymag.com for updates as more information comes to light.

When did you know that this career was right for you?

My mother was one of the few African-American nurses in Mobile. My father’s great-grandmother was the midwife for the community she lived in. It gave me chills to hear her story. At that moment, I felt like my life was predetermined, and I was just along for the ride. Being a nurturer is in my blood, from my great-great-grandmother to my mother —opposite sides of my DNA. It’s such a blessing at so many levels.

What has been the hardest part of your job?

Teaching young parents that their lives have to change. Those lives have become richer and much more fulfilling than they realize. Many can’t see it because they are still stuck in It’s All About Me World. But the best part is observing the family unit come together before my eyes. I love text messages and emails of their growth!

So, what is your child-rearing philosophy all these years?

I teach parents the foundation, the same foundation I was given, because it’s so immensely important in life. I don’t believe in sound soothers or bottle warmers or any of those gadgets. I teach the parents to exist without them, then add them back in if they want, but most never do! I get calls from clients saying they’re sitting outside having a cocktail while their friend is inside with the sound soother trying to get their own little one to sleep. But my client’s baby has been down for 45 minutes! That always feels good.

How do people act around you and your “one percent” families?
Wherever their lives took them, I traveled. Most people are pretty excited and want to know, are they normal people? I get great pleasure in telling them they all put their pants on the same way we do! That perspective is what has kept me in the “one percent” world. I am able to function in that world by bringing the reality of real life into their homes.

What has surprised you the most about your celebrity clients?

It’s funny — the dads are all pretty much the same. I’ve seen some of the one percent club dads just standing over a child’s bed and crying. I’ll go over and say, “What’s the matter? What’s wrong?” And they’ll say, “I don’t want to screw this up.” It’s funny to see them all have the same fear of being a parent. I come into these homes, and they’re so prim and proper when they enter into parenthood — no! That child doesn’t know who you are, it just wants its needs met! These parents become so humbled.

What advice do you have for the dads out there?

Things now are really geared toward mom and baby. With “Be the Parent, ” I’m trying to get to the fathers as well. Men don’t have a space where they can go and someone can tell them it’s gonna be OK or somewhere that they can vent with other dads. I want dads to see that every dad is the same. I want to give them a voice and let them know someone is in their corner.

What differences do you see between moms and dads?

After having a baby, the wife is trying to regain control. Sometimes she feels alienated when the husband goes back to work and his normal routine. And fathers go into birth thinking, I'll give Mom two weeks and all will be back to normal. They don’t really understand the struggles that a mom is facing at this point. A woman will try to mask it and carry the load, and both need to step back and say, “It'll be OK, we can do this.” I tell my clients often, “Just step up, and be the parent!” that at some point, when they start panicking, they stop and just say, “Oh, I know — be the parent.” 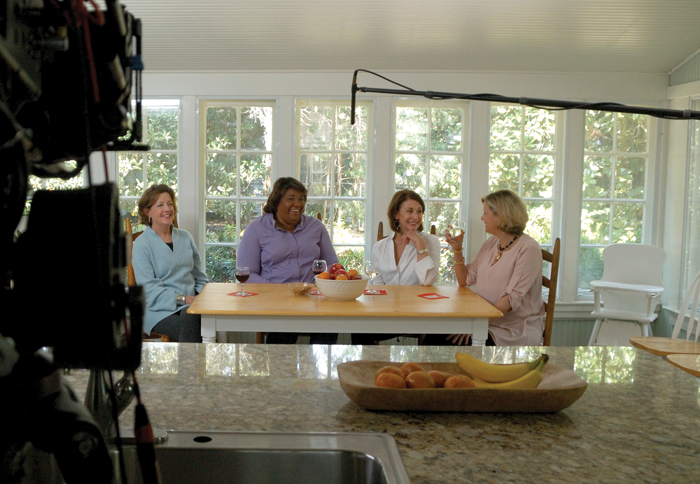 ABOVE Always with a love of her hometown Mobile in her heart, Connie completes as much of her Be the Parent branding in the Port City as possible. Here, she records a segment about the lives and roles of grandmothers in a child’s life right here in Mobile. From left to right: Anna Luce, Connie Simpson, Teresa McCown and Barbara Haas.

How did you decide to shift from nannying to your “Be the Parent” media brand?

When I leave a home, I’ve had people say before, “We need to clone you! We need more of you!” And I’ll say, well that can’t happen so now what? This “Be the Parent” movement is my “now what.” I want all parents to know it’s gonna be OK, that they can step up and be the parent.

And what was your inspiration behind the switch?

I was offered a spot on the “Nanny 911” show years ago, but I walked away. I thought, this is real life; it’s not a game. I didn’t want it done wrong. I want this information to go to young women or moms who are struggling to buy milk for themselves, let alone their babies. I want this to be the blueprint, always giving and always updated. Which is why we’re focusing on YouTube and social media. I don’t want to be boxed in as “just a nanny.” My knowledge is so much more diverse. I want my name to be universal. “Be the Parent” is for every parent.

What can you tell us about your partnership with MB Greene?

When I met Mary Beth, we were like a hand fitting in a glove — she has such a lovely spirit! I’d always wanted to create a diaper bag that was functional. Most of them nowadays look like a pot boiling over. People will pull out everything just to find a diaper or nail clippers. So seeing Mary Beth and what she had, I thought, “This will work.” So I used her bags when I went to the Timberlakes about a year ago to learn what worked, what didn’t work and what I wanted in a bag. And it’s really important to me to have control over it to make sure it’s done right. Mary Beth has just been so sweet in everything.

When can people expect to see more from Nanny Connie and “BTP”?

We’re hoping to have everything ready for October. That entails social media, the bags and a few other surprises in the works. This has become so much larger than me. All my celebrity clients want in, and even some who I haven’t worked with are all wanting to get involved!

Lastly, what are your three best pieces of advice for new parents as they learn to be the parent?

Well, first off, don’t second-guess yourself! Stress will make it worse. Secondly, remember that the word “parents” is plural; know that your partner is there to help you, even if just for five minutes. And third, any great foundation is worth the hard work because it’s what you build on. And an extra nugget of advice: Have patience!