At 5 years old, Robin Wallace probably didn’t expect she would spend most of her life on the baseball diamond. In fact, looking back on one of her first baseball games, Wallace remembers standing in the outfield thinking, “This is really boring.” By the time she was 11 years old, though, she found her groove as a pitcher and fell in love with the sport. America’s favorite pastime grabbed ahold of Wallace and instilled in her a passion and determination that would push her to greatness.

As an adolescent, Wallace played baseball for St. Luke’s Middle School and LeFlore High School; at both schools, she was the first girl to participate in the sport. Over the years, she met some resistance to breaking that gender barrier, but she always persisted. “There was always that one coach who would let me play, ” Wallace shares. “When everyone else said ‘no, ’ it only took one coach to give me the opportunity. And that’s how I got from one level to the next — that one person willing to give a girl a chance.”

While in college at Tulane University, she played some club baseball, but a nagging rotator cuff injury from high school limited her time on the field. During college, she had surgery and began looking for ways to get back in the game. That’s when she came across the North American Women’s Baseball League based out of Boston. After graduation, she headed up to Massachusetts. Over the next several years, she worked her way through a number of influential baseball jobs in the women’s league and beyond, working her way up to executive director of the women’s league. In 2004, she landed a spot playing on Team USA, and they won a gold medal at the Women’s Baseball World Cup and traveled around the globe playing her favorite sport.

She obtained her law degree from the University of Alabama School of Law in 2005, and a few years later began looking for work as an attorney — just as the economy took a dip. “The people I interviewed with kept saying, ‘If we give you a job, we’re afraid you’ll leave us because your resume shows how much you love baseball.’ But I went to law school to be a lawyer!” she says with an exasperated chuckle. In the end, she opened her own practice in family law and civil litigation.

A chance encounter in 2012 led her to the experience of a lifetime. She accepted an invitation to enroll in the two-week, intensive course known as “Scout School, ” where baseball scouts hone their acumen to pick the best of the best players for the major leagues. “I’d heard it was really hard, ” Wallace says. “And it was. There were grueling 14-hour days of hell. Fun hell, though!”

Despite going it alone (most attendees are sponsored by baseball clubs), she thrived. In 2014, she began scouting full time, making her one of only a handful of female baseball scouts in the history of the game. It is a job she juggles alongside her law practice and family. If you were to ask her if it’s a life she’d hoped for, she’d say it’s been even better — a grand slam. 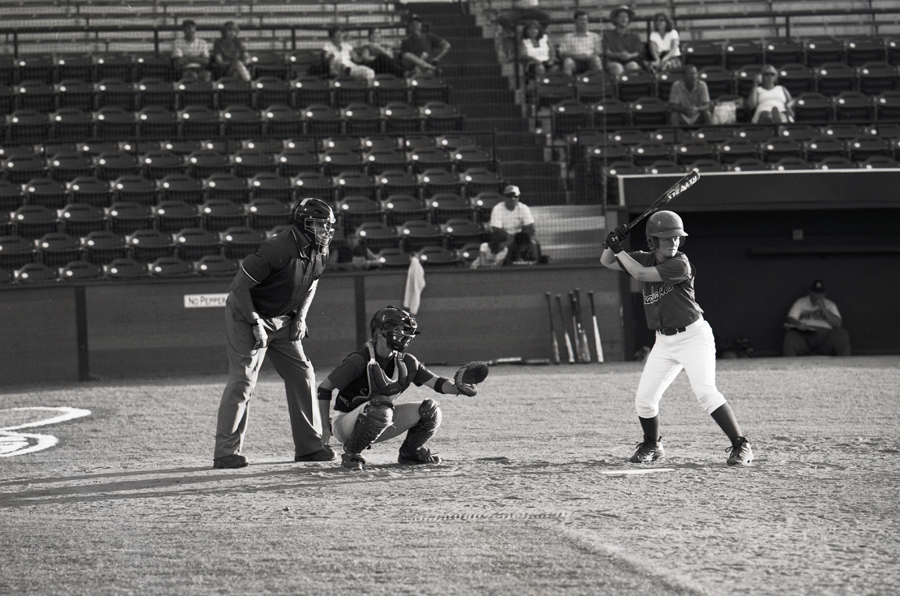 ABOVE Robin Wallace is up to bat, playing for the Seahawks in the North American Women’s Baseball League in 2005. Her achievements on the field have garnered her admiration and accolades over the years. Wallace was inducted into the National Women’s Baseball Hall of Fame in 2002. As a member on the United States’ first Women’s National Baseball Team, she and her teammates won a gold medal in the first ever Women’s Baseball World Cup in 2004.

When did you first realize how much you loved the game?

My first real memory of being obsessed with the game was in the coach pitch league. I was having trouble batting, and my coach was super nice. I remember staying after practice, and he would work with me and throw me ball after ball trying to help me hit. It took a while, but I was persistent and insistent on getting better and being able to do it.

I was an only child, and after my friends quit playing, if my parents weren’t there to throw to me, I didn’t have anyone to play catch with. So I had a brick house, and I’d go outside and just spend hours throwing a tennis ball against the wall. As I got older, I started throwing baseballs at the wall. My parents got very upset and told me I was going to crack the foundation of the house.

Many people tried to convince you to switch to softball over the years. Why did you stick with baseball?

It’s a different game. If you’re a tennis player, why isn’t Ping-Pong acceptable to you? Or why doesn’t a football player just go play rugby? They’re different sports. A softball is huge. It’s ginormous! The baseball just fits perfectly in my hand like it belongs there. The other thing is that I was a pitcher. I couldn’t easily transition from being a baseball pitcher to a softball pitcher. To this day, I can’t pitch a ball underhanded. I just think, “How do these girls do that? That’s amazing!”

What did you do after moving up to New England?

When I went up to Massachusetts after college, I knew I wanted to go to law school. I was looking for some kind of law job or internship. I saw a position opening for a private investigator. I left a message and thought they would never call me back. But they did, and I worked for a former police officer for that summer, riding around chasing workman’s comp claimants. I’m still friends with the guy today. I probably wasn’t the best PI with my Alabama license plates. And I was supposed to get my windows tinted, but I didn’t have enough money. So I was pretty conspicuous.

Did being a private investigator help you later on in your career?

As a scout, much like being a PI, you’re observing details. You’re breaking down players. They tell you at Scout School that you’ll never watch a game the same way again. You’re not just passively watching; you’re breaking everything down almost in slow motion. Then you’re taking notes, jotting everything down and grading the players. When you add up the numbers, you ask: Is this a prospect? Can I foresee him in a crystal ball being a major league baseball player? Scouts are literally trying to predict the future because you won’t know for five years or so if your guy is who you say he is. There’s no instant gratification. You’re hoping and praying that you’re right. The mystery of it is part of the fun. 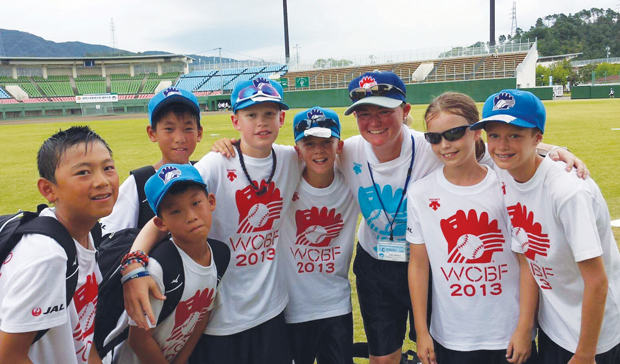 ABOVE As a coach at the World Children’s Baseball Fair in 2013, Robin Wallace mentored a team of youngSters for a week of fun, friendship, culture and — of course — baseball in Fukui, Japan. The Fair, which invites children from more than 20 countries to participate in baseball clinics and cultural exchange, has even more meaning for Wallace and Mobilians, since it was cofounded by Hank Aaron.

How did you end up at Scout School?

One year I went to the Baseball Winter Meeting, which is a huge networking event and is basically the who’s who of baseball personnel each year. I was introduced to the director of the MLB Scouting Bureau, Frank Marcos, and I told him about myself. He was so intrigued that he asked for my resume, and I got invited to Scout School!

I was kind of wavering on going. I was only one year into my law practice, and it was going to be two weeks away. I thought, “It may just be a waste of money. Is this an investment, or are you doing this just because you love baseball and you can say you went to Scout School?” I decided that I’d never have this opportunity again, so I went. I’m glad I took the chance.

Had you ever really thought about scouting before?

Not as a profession or career path, and I don’t think most people consider it because scouts are kind of the unsung heroes in baseball. It’s not lucrative; it’s grueling. And you’re on the road away from your family a ton. It’s a tough profession.

It’s so hard! They just throw you in there, and you’re looking at all this stuff, writing these reports, and it’s all new. You’re thinking, “How can anyone possibly remember this?” I remember my instructor didn’t even have a notepad. And I thought, “This is crazy — there’s no way I could ever do that!” I’ve always been a note taker. The instructor was making fun of me and said, “I’m going to take your pen and paper away, ” and I said, “If you do that, this is completely pointless!” The last day he did take them away, and I was surprised at how much I remembered. You have to be able to multitask. Sometimes I have a radar gun in one hand, a camera in another, and a pencil and paper.

Besides hard stats, what are you looking for in a potential player?

It’s the intangibles. How much heart does he have? Is he a hard worker? A leader? Will he get along with teammates? All that stuff that can’t be measured by stats. It’s a whole package. You look at their toolsets, their physical makeup and who they are. Is this the kind of kid who’s laying out, giving 100 percent for the ball every time? You might even ask if he is polite. Is he a gentleman? Some people may think that doesn’t matter, but if you’re paying someone this kind of money, you want them to represent your organization in a way that reflects its values. Some guys become a nightmare, not because of what they’re doing on the field, but how they’re behaving off the field.

Growing up, you were a girl playing alongside the boys. Do you consider yourself a trailblazer?

I never set out to be a trailblazer or pioneer. I’ve just been doing what I love since I was 5, and I’ve continued to do that. If that makes me a trailblazer, then that’s great.

While following this path, I have had girls and women reach out for support and advice, and I’m happy to help them achieve their dreams and accomplish their goals, however outside the box those may be.

I’ve had countless mentors along the way who have made the road less traveled a little easier for me just by saying, “You can do this.” If you follow your dreams, you inadvertently become a trailblazer. By default, you make it easier for those who come after you.