Campus ambassadors at Spring Hill College have a little joke they like to toss out while touring prospective students around the school. “Our athletics are top-notch. In fact, our football team has been undefeated since 1941!” they’ll declare with a smirk before explaining that Spring Hill’s football team disbanded that year. But up till then, the Badgers fought valiantly against now-iconic teams around the South, even if in vain.

At the turn of the 20th century, a group of Spring Hill seniors organized a football club. The Spring Hill Review of 1901 comments that “most of them had never seen a football game, but steady practice … succeeded in evolving an eleven of no mean order.” Over the next four decades, the Spring Hill Badgers would face off against collegiate neighbors such as LSU, Tulane, Birmingham-Southern, Auburn and even the University of Alabama, whose first night game was played against Spring Hill in 1940. (The LSU Tigers’ first night game, held in 1931, was also against Spring Hill, initiating the longstanding fan favorite — after-dark kickoffs in Death Valley.)

Though the college’s newspaper, the Springhillian, habitually printed glowing editorials before the start of every season boasting that each year’s team was better than the last, the teams tended to lose more games than they won. Postseason reviews usually commended the players on their fighting spirit despite their record, but a few displayed the disappointment of fans. One particularly scathing season recap from the 1940 yearbook, the Arx, shows their frustrations, though now, with the passage of time, the tone seems slightly more humorous: “Almost in direct contrast to the opening of the 1939 football season, a 13-0 victory over Troy State Teachers College [now Troy University], the Badgers went listlessly through their season losing all the remaining games, except for a scoreless tie with Howard College [now Samford University] … Spring Hill followed the usual procedure of the past three seasons,  winning seldom, showing winning ability seldom.”

Not every year was a flop, however. The team finished an undefeated season in 1909, with nearly flawless records in 1920 and 1929. The Badgers celebrated a particularly stellar year on the gridiron in 1927, winning all but their first game. Each victory is detailed in the Corsair 1928 yearbook, but one is heralded above all the rest: the Badgers’ success over Miami of Ohio. The RedHawks (and, indeed, most people) took their own victory for granted before ever stepping onto the field. “Here, ” the yearbook describes with poetic pride, “the true Spring Hill fighting spirit asserted itself and those Badgers that never say die dragged the unbeaten Miami team down at the end of a 6-0 score. All hail the fighting Badgers of 1927!” Still, those successes were short-lived.

As the years wore on, the Spring Hill community became somewhat resigned to their team’s less-than-exemplary gridiron aptitude. A yearbook recaps the 1940 season in which they won three of six games: “To Spring Hillians, long used to successive football defeats, the 1940 season was a mild success. True it was that the team won no conference championships nor post-season bowl bids, but also true that they put up a whooping fight … and set a standard for courage and spirit which will long be remembered by a grateful student body.” A letter written to John J. Druhan, S.J., the school’s president from 1932 – 1938 (an interval during which the team only had one winning season), supports the team in the face of abolishment, stating that “football, even when … not a winning  team, has become very closely connected with the school and is now the background of the spirit of the college.”

Spring Hill’s eleven played their final game in November 1941 against Mississippi College, which they lost 53-7. Following the 1941 season, due to the World War II draft and the administration’s unwillingness to foot the bill with the team’s often dismal performance, the fighting Badgers huddled around the pigskin no more.

So the school’s tour guides today continue to breathe life into the Spring Hill team of old, so that their memories, if nothing else, may remain undefeated. 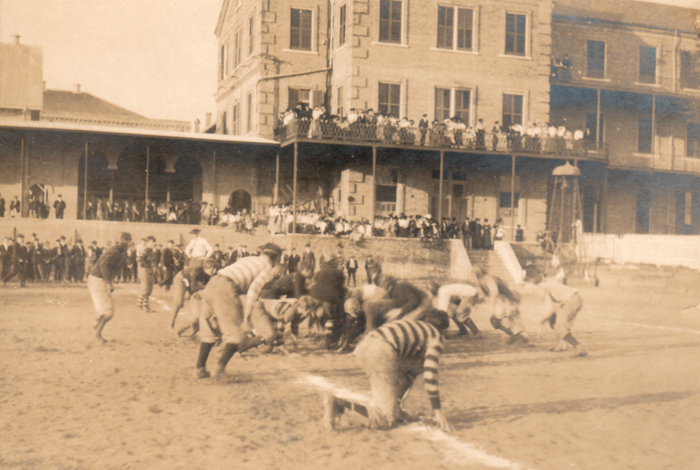 ABOVE Spring Hill Badgers played their first ever football game in 1901 on what is now the Spring Hill baseball field. Quinlan Hall, shown here with its second-floor balcony holding spectators, still stands today. At the time of this game, Quinlan Hall housed the gymnasium and pool.