Steamboats were the defining objects of antebellum Mobile. According to one contemporary list, there were 50 of them working the local waterways. They ranged in size from 26 tons to more than 440 and bore colorful names like Cuba, Wild Duck, Eliza Battle, Illinois Belle, Forest Monarch, Heroine, Lucy Bell, Magyar and Emperor. Even so, compared to the overall steamboat tonnage at New Orleans — 80, 993 in 1842 — Mobile was a distant second with just shy of  7, 000 tons; however, that was enough to make for constant river and Bay traffic, putting her well ahead of both Charleston and Savannah.

They were ingeniously designed contraptions, smaller than the behemoths that plied the mighty Mississippi, but beautifully adapted to the peculiarities of local river travel where shallow water and tight bends were frequent realities. The typical mid-19th-century steamboat was essentially a big raft with paddlewheels and a superstructure. Captains liked to boast that they could “run on dew, ” and it wasn’t far from the truth. Drafts between 2 to 4 feet were the norm, even when loaded, which allowed these boats to penetrate far beyond where light schooners could go. The best boats had three decks with a square pilothouse perched atop.

The main deck was mostly open to allow for easy loading and unloading of cotton bales and other cargo. If the boat was a side-wheeler, as most antebellum vessels on the Mobile were, the kitchen, boilers, engine and paddle wheels were boxed and situated in the center. Above the main deck was the boiler deck, a misnomer since it consisted of a long saloon flanked by small passenger cabins. Each of these had two doors, one into the saloon and the other onto an outside gallery with a balustrade that ran all the way around the vessel. Next was the hurricane deck, which featured a smaller structure that housed the officers’ cabins. This was known as the Texas, named for being separate from the boat’s passenger population, like the Republic of Texas was separate from the United States. The pilothouse was centered over the Texas, and the most elaborate ones, decorated by fancy jigsaw carpentry, looked like big cupcakes. From this high vantage, the pilot steered the vessel by use of a large, polished wheel that employed ropes to move the rudder.

Of course, the steamboat’s most distinguishing feature was the pair of tall black smokestacks at the front of the pilot house; the height increased draft and engine efficiency. These vented the wood fires that stoked the boilers and belched thick smoke and fiery embers when there was a real head of steam. Lastly, steam whistles were used for signaling and releasing pent-up boiler pressure, and by the 1850s, the finer vessels carried impressive calliopes with keyboards, which played cheery tunes to amuse or distract those on board or ashore. 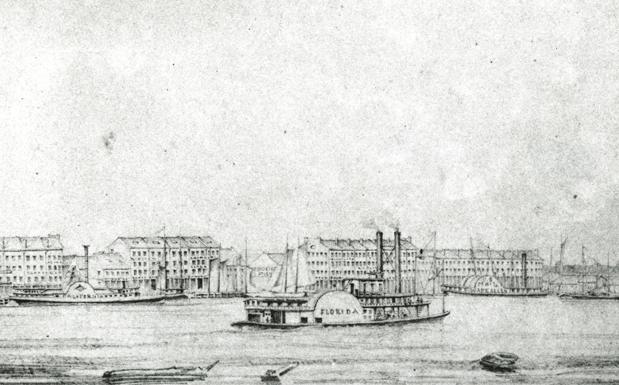 The Mobie River harbor as it was typically seen in 1851.

The English journalist James Silk Buckingham rode one of these vessels down from Montgomery and found the trip anything but relaxing. “The engine was a high pressure one, ” he recalled, “and gave out a burst of steam from a tall chimney, at every revolution of the wheels, the sound being like the hard breathing of some huge mastodon laboring under the asthma.” The beds and meals were perfectly satisfactory to the well-traveled Englishman, “but the tremulous motion communicated by the high-pressure engine, through all this range of cabins, occupying as they did the space which covered the engine itself, was so great as to render it almost impossible to write, and very difficult even to hold a book steady enough to read.”

The Scottish geologist Sir Charles Lyell found himself on the Mobile in 1846 and was especially disconcerted when the crew blew out the boilers with blasts of steam. This was an absolutely necessary and frequent procedure in the Mobile’s muddy waters, lest the works end up, in popular river parlance, “crusted, rusted, busted.” Lyell wrote, “When they clear the boilers of the sediment collected from the river water, it is done by a loud and protracted discharge of steam, which reminded us of the frightful noise made by the steam gun exhibited at the Adelaide Gallery in London.”

Despite these sometimes alarming sounds, the better Mobile River boats provided plenty of comfort, as Buckingham admitted. The steamer James Battle, launched in 1860, represented the epitome. It featured an opulent saloon with big chandeliers and tables with “different colored cloths, embedded in various designs around the edges, and fringed with gold lace and gold tassels, ” and in the ladies’ cabin a “magnificent $1, 000 piano” was situated in front of a large gilded mirror. A wood-burning stove provided heat in the winter. Steamboat food ran the gamut, but again the best was very good indeed, with boiled oysters, fruit and game on the bill of fare. If the weather was decent and one had a good cabin, a steamboat ride could be a pleasant thing. The English naturalist Philip Henry Gosse wrote of his “unabated delight” during a moonlit cruise upriver. 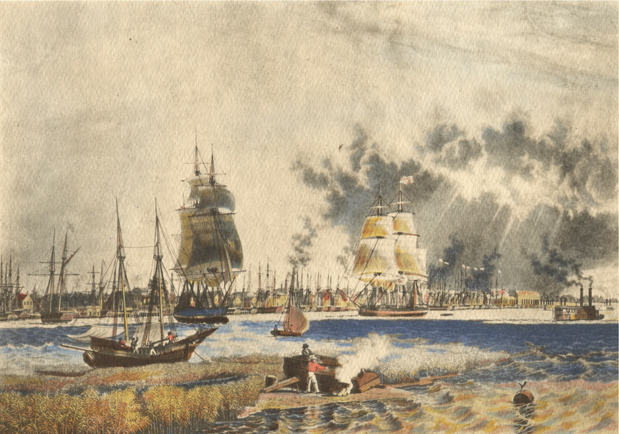 “Mobile Harbor 1842” by William Bennett. Both sailing vessels and early steamboats ply the stream in this antebellum view.

As for the roustabouts, stevedores, rollodores and firemen aboard the vessel – usually slaves, sometimes Irishmen –steamboat travel meant backbreaking toil. The men lived and worked on the main deck, wrestling cargo into place or unloading supplies. They scrambled ashore at landings to cut and load firewood and maneuvered the big cotton bales with heavy iron hooks, while overseers kept an eagle eye and applied the whip to anyone caught shirking. Accidents were common, and a fall overboard mid-river meant almost certain death. In between stops, they played dice and at the end of the day were known to break out a fiddle and a banjo. Bed was a rough bit of burlap right on the deck or propped against a cotton bale. The stewards enjoyed an easier lot, in general, and on the quality boats, they were well fed and given good clothes in order to be presentable to the passengers. Even so, their welfare depended on careful attention to detail and enduring insults or rudeness in silence. Race and class divisions were stark, and none ever dared to breach them.

John S. Sledge is the author of “A Fine, Large River: The Mobile River in American History, ” to be published in 2015 by the University of South Carolina Press.