“With the exception of Cuba, Dauphin is, historically, the most prominent and interesting island in the Gulf of Mexico.” So wrote Richebourg Gaillard McWilliams, former chairman of the Division of Humanities of Birmingham-Southern College and the translator of “Iberville’s Gulf Journals.” In the 1950s, professor McWilliams was charged with naming Dauphin Island’s streets, a job he handled with a lot of thought and organizational skill.

The sandy shores’ rapid development during that decade seemed exceptional for the times. In 1955, after the Gordon Persons Bridge connected the island to mainland Mobile County, there was a real estate boom. More than 2, 000 lots were sold in a single week, according to the Mobile Chamber of Commerce. By 1957, prospects looked even brighter when the Isle Dauphine Club, a midcentury modern architectural gem designed by T. Howard Ellis and Arch Winter, opened to great acclaim. While the transformation of housing and recreation took place, remembering the area’s past with well-named streets paid tribute to more ancient days.

In the developers’ plans, boulevards, avenues, lanes and places ran east and west; drives, streets and courts ran north and south. McWilliams assigned names alphabetically, beginning at Fort Gaines State Park on the east and the sand dunes on the south. Over time, new streets were established, such as Agassiz Street, Albright Drive and Barcelona Drive, near the popular sites of Fort Gaines, Audubon Bird Sanctuary and The Estuarium at the Dauphin Island Sea Lab. Here’s a sampling of the Committee of Nomenclature’s original selections. 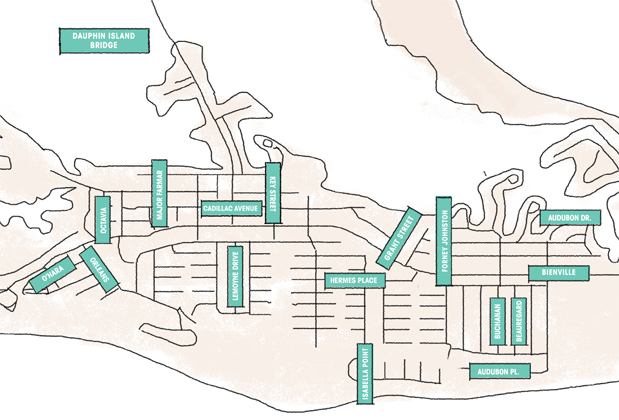 Audubon Street (Audubon Drive and Audubon Place)
Named for the great artist, John James Audubon, who is said to have painted the hummingbird in his famous “Birds of America” while visiting in Mobile. More than a century later, WildBird Magazine named the island’s 164-acre Audubon Bird Sanctuary one of the top four locations in North America for viewing spring migrations.

Beauregard Street
Named for Pierre G.T. Beauregard, an engineer officer in the U.S. Army who, as a captain, was in charge of Gulf Coast defenses when Fort Gaines was built and later became one of the ranking generals in the Confederate Army.

Buchanan Street
Named for Adm. Franklin Buchanan, first commander of the U.S. Military Academy at Annapolis, the highest ranking officer in the Confederate Navy, commander of the naval defenses of Mobile, director of organizing Selma-built ironclad warships for an attack on Yankee ships blockading the Bay in 1863. Fittingly, Beauregard Street and Buchanan Street connect to Admiral Semmes Place.

Forney Johnston Drive
Named for Forney Johnston, the son of Alabama’s twice-governor Joseph F. Johnston. He was also the able and patient leader of the group that, for half a century, retained composite title to Dauphin Island as a requisite for its development as one of America’s leading seashore recreational areas.

Grant Street
Named for John Grant who, in 1839, secured permission from the Alabama legislature to dredge the Cedar Point Channel and operate it as a toll passage.

Hermes Place
Named for the British warship Hermes which was destroyed in an attack on Fort Bowyer (where Fort Morgan now stands) when a British fleet of 38 warships attacked Dauphin Island and the fort after the Battle of New Orleans in the War of 1812. There have been seven other warships in the British Navy carrying this renowned name since then.

Isabella Point
Named for Isabella de Bobadilla, the wife of Hernando de Soto. Isabella is said to have waited in vain at Dauphin Island for the return of de Soto, who was killed while on one of his extensive exploration trips through the Mississippi Valley. Capt. Maldonado, the Spanish fleet commander, had escorted Isabella to the Mobile Bay area in support of de Soto

Key Street
Named for Francis Scott Key, author of “The Star Spangled Banner, ” who was a goodwill ambassador from the United States government to Alabama when President Andrew Jackson had enraged the Alabama governor by sending Federal troops to enforce an Indian treaty. Key Street, between Cadillac Avenue and DeSoto Avenue, is near Indian Mound Park.

Lemoyne Drive
Named for the five LeMoyne brothers – Bienville, Iberville, Chateaugue, Sérigny, Sainte-Hélène – who founded Mobile and served the Mobile area for many years during its early days of trials and vicissitudes. It was probably the single most important name in the history of Mobile and of French Louisiana when that province occupied three-fifths of the North American continent. Lemoyne Drive is the gateway to the Alabama Deep Sea Fishing Rodeo.

Major Farmar Street
Named for Maj. Robert Farmar who took possession of Mobile and the Alabama-Tombigbee area for the English king when the Peace of Paris was signed in 1763 and governed Mobile throughout most of the English colonization.

Octavia Street (and LeVert Street)
Named for Octavia Walton LeVert whose home in antebellum Mobile was a gathering place for those who had won fame in the fields of politics, art, music and literature.

O’Hara Lane (and O’Hara Avenue)
Named for Theodore O’Hara, editor of The Register during the leave of John Forsyth to Mexico as United States Minister, and composer of the famous poem “The Bivouac of the Dead, ” which is carved on the gates of Arlington National Cemetery in Virginia.

Orleans Drive
Named for Phillipe, the Duke of Orleans, nephew of Louis XIV and Regent of France when the fort at Mobile was enlarged and named Fort Condé. Orleans Drive leads to the Isle Dauphine Club.

Saint Denis Court
Named for Louis Juchereau de St. Denis, one of the most successful traders in the Mobile Colony, sent by Cadillac to trade with the Spanish colonies of the New World. As one-time commandant of Isle Dauphine, he successfully defended the island against an attack from a Spanish expedition. On one of his missions into Spanish territory, he was captured, but fell in love with a Spanish girl, whom he later married and moved to Mobile.