In the spring of 1996 I was determined to rebuild an old camp in the Mobile-Tensaw Delta. Miles from any road, deep in the swamp, and accessible only by small skiff, it was going to be a big commitment of time and money for a 25-year-old newlywed.

Coincidentally, one of my good friends at work, Carter, had a delta camp. His family owned the land just west of my lease. He knew right where my site was and invited me to go up with him on the weekend so he could show me around.

We set out for the Tensaw River that Friday afternoon. The air was cool and the sky so blue it made my scalp tingle. The river was languid and healthy with the briny smell of mud and seagrass and fish.

The equipment Carter loaded from the truck into his Stauter  fascinated me: a Q-Beam, shotgun, Jerry Cans of gasoline, rubber boots, crates of food, sleeping bags, a duckbill pole, trotline, whiskey, and a cooler of beer. By the time we were ready to shove off, there was only enough room in his 14-foot skiff for each of us to squeeze in. I sat there, feeling far out of my element. I’d always considered myself an expert when it came to wilderness adventure and ingenuity, but suddenly I felt dwarfed by all of the gear and the swamp jungle that lay ahead of us.

I’d only been into the Lower Delta one time before and had entered from the Causeway to the south. The trip in this time was from the east, via river. I sat in the front of the boat while Carter steered the tiller drive from the rear. It was a 20-minute ride to his family’s place. He maneuvered us through a maze of rivers that I was sure I would never be able to retrace.

As we tied to the dock of Delta Shelta, his camp’s name, and began unloading gear, I was still in awe of this swamp that had always been so close and yet contained so much that I knew nothing about. Even the way Carter secured his boat, simply taking a few rodeo-like wraps around the piling, was fascinating. On the Bay, you only have a few seconds to leap off the bow and secure the painter with a bowline knot before the waves and wind yank the line tight. Here, a boat sits where you leave it, occasionally drifting with the breezes like a leaf on a pond.

Delta Shelta is a square, one-room structure on pilings, six to eight feet above the swamp. A dogtrot out back leads to a small generator shed. A 6-foot screened-in porch runs the length of the front. The enclosed living space is about 400 square feet, sided and floored with pine planks and covered with a tin roof. It is typical delta style.

The inside of the cabin holds two army bunks with mattresses still in the plastic. I learned this is not because they are new, but to keep the insects out. Against one wall are a counter and a sink. In the center of the room is a picnic table with bench seats. The shack smells of aged pine, kerosene and the urine of small animals. It is the most perfect place.

After unpacking the gear, we sat on the porch drinking beer.

Carter said before his college days he spent more time in the Delta, but now he only made it up occasionally in the spring and fall. He liked to run catfish lines and jugs. I asked about the jugs, and he was surprised that I’d never heard of that technique. He explained that you tie a hook and line to a milk or Clorox jug, bait it, and throw it out in the water. Using binoculars, you watch for the jugs to bob or move against the wind, meaning there’s a catfish on the line. Eventually, when you finish your beer, you ride out and retrieve the fish. I knew right then I wanted to go “juggin’.”

Carter also told me that Mr. Stauter had been raised not far from where we were. His family used to have a farm, with cows and a few other animals. The Stauters would commute to the city, using boats they had built, to trade and purchase supplies.

I was fine with the part about boat building, and even the part about living in the Delta, but I couldn’t get past the cows. I imagined them hopping through the mud like horses in high snow.

“That’s what I heard. There’s high ground over there.”

I took another sip of beer. Swallowed. “Crap.”

It was soon dark and the sound of the frogs bleating from the miles of swamp was almost deafening. The water lay like a flat of mirror under a starry, moonless night. The scenery before me only reconfirmed my commitment to build my own delta retreat. 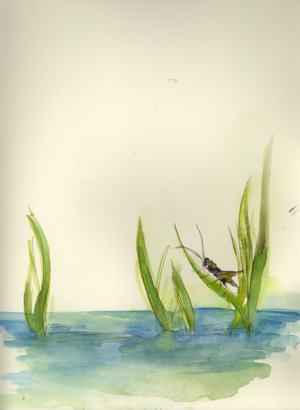 A PLACE OF MY OWN

My shack, quietly fallen into the mud, was waiting for me.  I decided that I was going to need some help rebuilding, and it didn’t take long to round up five eager friends. The six of us became the initial members of the Swamp Camp.

There was a good deal of energy concerning Swamp Camp for the first six months. People donated lumber and hauled it in their Stauters. We jacked and leveled the floor. We pulled up some of the old dock pilings, replaced them, and reconstructed the landing.

Then we spent a day building a small generator shed. Into this we chained an inexpensive generator and wired it to a single bulb.

My brother, Reid, joined me for my first overnight trip. It was early June and so hot that we didn’t leave the landing until it started to cool in the late afternoon. After making the 15-minute run to the camp, we sat on the porch, drinking beer and shooting a pellet pistol at the biggest, blackest grasshoppers I’ve ever seen. The marsh grass teems with these lubbers, and their weight bends the blades until you hear a thud when they hit the mud. They don’t fly, and I’ve never seen a baby one. I have no idea where they come from; they just appear every year like spawn of the mud. I have never heard of these giants biting anyone, but I don’t care to hold them. The one time I did pinch one between my thumb and forefinger, I thought I felt its heart beating beneath a rib cage. We’ve used these insects to good effect for years. There is nothing more satisfying than placing a few of them on the chest of a napping camper and sitting back for the show.

As darkness crept over the swamp, my brother and I felt the weight of our commitment settle over us. We started the generator, and the single bulb inside came to life. Out on the landing, we shined the Q-Beam over the water. Orange alligator eyes dotted the surface as far as we could see.

The mosquitoes were out in force, and we decided to return inside for relief. This was a mistake. The walls of the camp were still not sealed to the roof. The front and back doors had half-inch gaps around the frames.

There were just as many mosquitoes inside as out. But mosquitoes weren’t the main problem. It seemed that every species of insect for miles around had decided to make a pilgrimage to the mysterious light in the swamp.

The camp, seen from the outside through the windows, resembled an aquarium of insect fury. The many spider webs couldn’t keep up. They grew so heavy that they sagged and tore loose of their moorings.

We unscrewed the bulb and plugged in an oscillating fan. Then we spat bugs from our lips and recoated ourselves with insect repellant.

“What you wanna do now?”

“I’ve got a Monopoly game.”

“We can’t see anything.”

“We can just drink some more beer.”

Soon, I needed to use the restroom. I had recently rigged a commode in the generator shed. This contraption was nothing more than a small seat with a hole in the top and a hole beneath it in the floor—really, only a way to get some privacy.

I found that using my restroom was like a taste of hell.

As I sat there in the darkness, the generator – not two feet from my face – screamed full-bore, leaping at its chain. The sheet-tin walls exacerbated the sound like crashing cymbals. But I tried to be optimistic. I finally reasoned that the gasoline fumes offered some relief from the mosquitoes. However, the heat was unbearable, and I gave up.

“Pretty nice. No mosquitoes in there.”

“Maybe we should sleep in it, ” my brother joked.

We took sheets and sprayed them with OFF, then lay beneath them, covered like corpses. I heard the mosquitoes hovering over me.  Eventually the DEET fumes got to me, and I made a breathing hole. I felt predators tickling my lips as I sweated and waited for daylight.

“What you wanna do?”

“I guess get up and drink some more beer.”

Our first night in the Delta was long and unpleasant, but this croaking, cheeping, pulsating, sweaty jungle had captivated me. I’d certainly found a place man was not meant to be, much less spend a night in. Yet jacked up over the marsh in a safe little wood box, I felt I’d gotten away with something.  I was proud of myself.

It would be a while before I improved the facilities enough to spend a comfortable night. It would be even longer before I was bold enough to leave the security of the camp and get out into the night swamp with spotlights and frog gigs and whiskey, all the things I’d imagined and heard about. But I was making progress on both fronts. I was even beginning to write about my experiences. The more I studied the place and jotted my notes, the more convinced I became that I’d found a real source of inspiration.

Watt Key is the author of the award-winning novel, “Alabama Moon.” His newest book, “Fourmile, ” will be released next month, and his screenplay “L.A. Dirt, ” is currently in production.