I zero in on my target, take a deep breath and let go. A melodic swoosh, followed by a solid thud, reverberate around me. I am Katniss Everdeen, and I have made my kill. OK, so maybe I’m not really “The Hunger Games” heroine, roughing it and living off the land in District 12. I’m just a city girl sharpening my archery skills, but it’s rather exhilarating. My teachers are two high school students, Tyler Williams and Miles Wilson, members of the Bryant Hurricanes’ archery team. To say that these teenagers are experts is an understatement. They have achieved a host of accolades, one of which was being invited to compete in South Africa this summer as a part of the National Guard’s All-American Team. The odds seem to be ever in the skilled marksmen’s favors.

The Rigors of The game

At our training facility, the Alma Bryant High School cafeteria, in Irvington, my coaches demonstrate how to shoot in a fluid movement that comes as second nature, like tying their shoes. After watching their example, it’s time for me to take my shot. I step up to the line and stand so that my body makes a ‘T.’ I grab the Matthew Genesis bow with my right hand and balance its lower limb on my thigh. Wilson tells me that during competitions, the firing line is usually packed pretty tight, so the best and safest thing to do is to pick up an arrow out of the ground quiver to my right, using my left hand, bringing it over my bow. I do as I’m told and attempt to place the Easton 1820 arrow underneath the knot on the bow. For clumsy individuals like myself, this takes a minute to master.

Once my arrow is finally set, I raise the bow, and pull the arrow back using my three middle fingers, so that the fletchings on the arrow brush my cheek bone. My coaches remind me to keep my back straight and take a deep breath to slow my heart rate and calm my nerves. (Maybe it’s me, but holding a deadly weapon flush against my face while trying to shoot a target is slightly intimidating.) They tell me there is no
real trick to hitting the target, so I bite the bullet and release. I reload, and shoot again, then repeat once more. Finally, I walk up to the target to assess how well I’ve done. All yellows. Not too bad for someone who has the same athletic prowess at age 26 as I did when I was 5.

My coaches and their fellow teammates tell me that once the rudimentary form is mastered, seasoned archers begin to develop unique spins on the motions. “There’s one basic way of shooting, but everybody kind of has their own way of doing it, ” Wilson says. The students are as skilled at instructing me as they are at the sport itself. That’s because they’ve had lots of practice since the archery program is run on a mentor-based system. “In our program, we let our kids teach one another, ” Coach Roy Richardson says. The more experienced students pass on their wisdom to the newbies of the tight-knit group.

Since the program’s inception in 2006, the Bryant Hurricanes have been making their mark on the national archery scene. “I pretty much tell them, ‘While you’re here studying history, why not make some, ’” says Richardson, who brought the sport to the school. With seven consecutive state championship titles and a third-place finish in the National Archery in the Schools Program (NASP) tournament, it’s obvious that the Hurricanes are creating a legacy. Just one glimpse into the school’s trophy case will attest: The archery team is giving all their other sports combined a run for the money. With Bryant’s proven success as a model, other local schools in Mobile and Baldwin counties, such as Gilliard Elementary, St. Luke’s Episcopal School and Foley High School, are implementing archery programs as well. 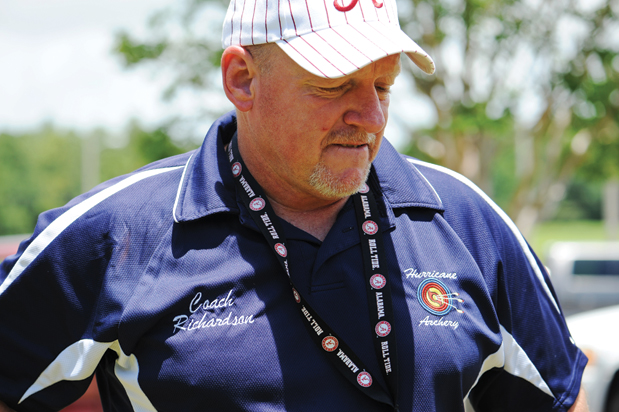 Coach Roy Richardson brought the sport of archery to Alma Bryant High School in 2006. He had previously coached the activity at Grand Bay Middle School.

The team members add that, without a doubt, the popularity of “The Hunger Games” among their peers has increased interest in an activity that has been around since the Stone Age. But, they’ve also gained quite a local following for other reasons. “We’ve had support from lots of people in the community, even from the beginning, and others have jumped on board, ” Richardson says. The athletic group is predominately funded by fundraisers and businesses within the community. The team tries to reciprocate as much as possible through service opportunities such as their summer archery camps and the sea oat-planting projects on Dauphin Island. This charitable spirit is something that Williams and Wilson took with them to Johannesburg, South Africa, this past July. In addition to competing as a part of the National Guard’s team and journeying on a safari, the young men were given the chance to share their archery know-how with South African children. Richardson hopes that his pupils will carry this sense of philanthropy, along with leadership skills and pride in doing something well, with them into adulthood. “Our attitude is that if you’re going to do it, if you’re going to put the time in to the sport, you might as well become good at it, ” Richardson says. 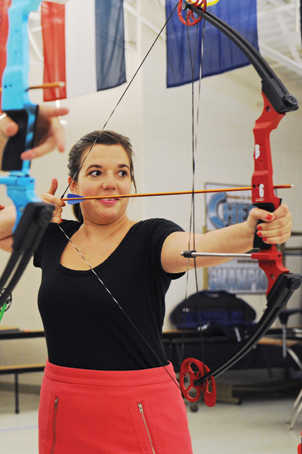 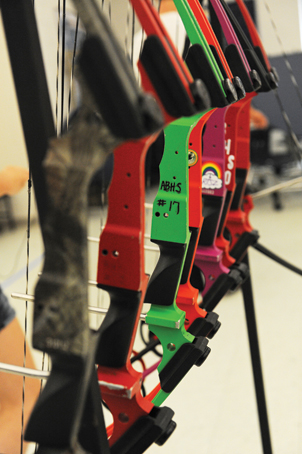 ABOVE LEFT Editorial Assistant Mallory Boykin demonstrates what she learned during her lesson at Alma Bryant High School. ABOVE RIGHT Archery equipment has come a long way from the wooden tools of the Paleolithic and Mesolithic eras. Today, the bowmen and women suit up with Matthew Genesis bows and Easton 1820 arrows.

The Finer Points of Archery