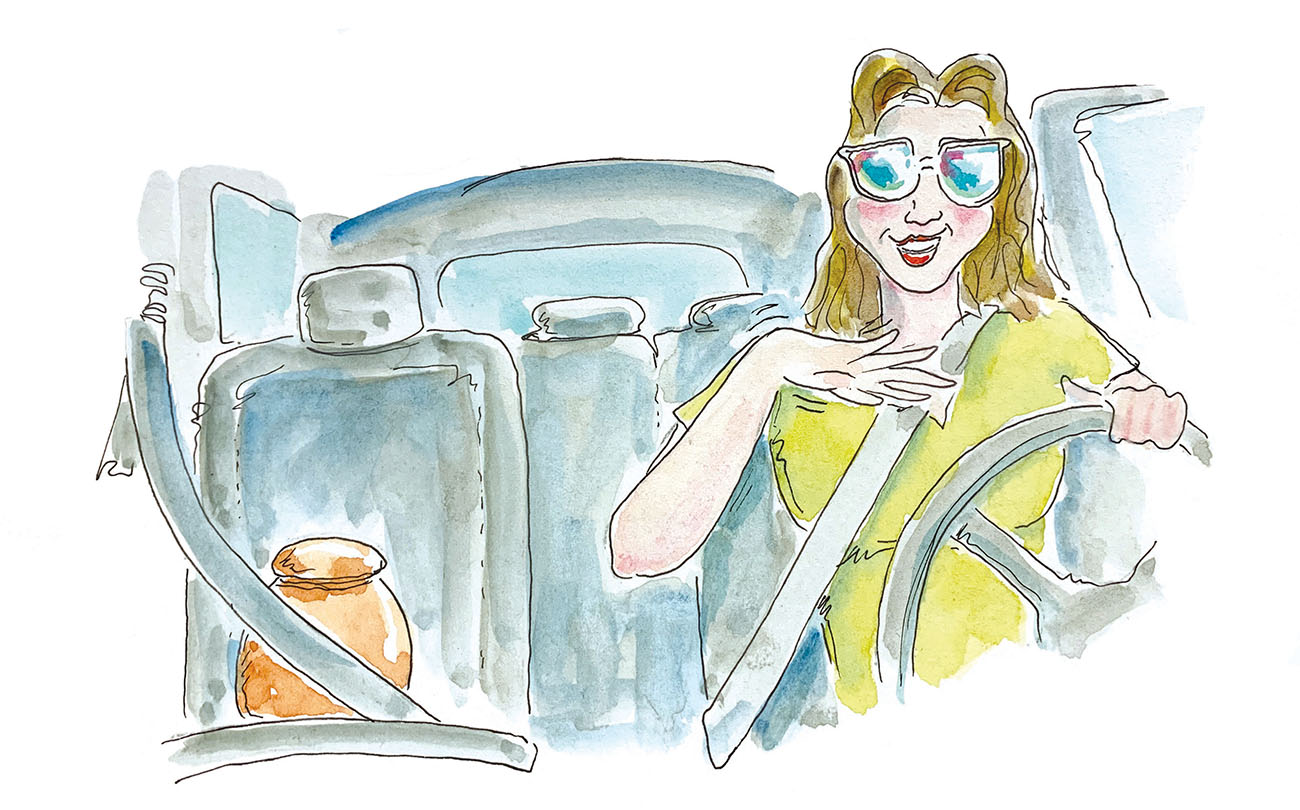 I recently found myself alone in a car traveling a bleak and rainy back road with the ashes of a man whom I have never met. Alone for two hours.

“What did you do?” said my friend, as I relayed to her my somewhat odd circumstance.

“I talked to him,” I answered, honestly.

I mean, what else are you going to do? It seemed impolite to do otherwise.

We (or, rather, I, since it seemed to be a decidedly one-sided conversation) discussed the inclement weather, his new home, and some general current events. I wondered if he already knew what was happening, but since he didn’t interrupt me, I carried on. We (or I) sang along to the radio some as well. After all, two hours is a long time to keep up an amicable social discourse.

You would think my friend might be vaguely surprised that I had spent the better part of two hours chatting away with an urn of ashes, maybe even shocked. But she was actually only vaguely amused. She had, after all, implored her husband to dig up her beloved cat’s carcass and move it across two states to their new home in Alabama. He obliged because he, like we all do, understands that Southerners seem to have a unique relationship and fascination with their dead. It’s almost as if they are not. Not really.

For instance, one year I called Mama shortly before Christmas to coordinate our holiday festivities. High on her list of things to do was getting fresh flowers to the cemetery to decorate the graves of her parents and Daddy’s, and when I say high, I mean high, as in after shopping but before menu and wardrobe planning. After all, everyone needs some Christmas cheer, even if they are looking down on it from heaven. Or up, as the case may be, but we always hope down.

When I was a little girl, Mama, Granny and I spent endless hours in old country cemeteries searching for the final resting place of distant relatives. They would recount generational relationships with such detail and accuracy that it made 1 Chronicles seem dubious in its recounting. We would also examine the graves of strangers and try to figure out who they must have been in relationship to their neighbors and what their lives must have been like. Lost children. War dead. Widows. All with real lives to be imagined and stories to be told.

Later on, after visits home from college, before I drove back, I would always stop by Pine Crest Cemetery to talk to my grandfather, whom I called “Baw,” for a little while. Then I would drive over to Mount Nebo and say hey to Sarah, my childhood caregiver. I would brush away the debris and the occasional errant fire ant from their headstones, pull a weed or two, and be on my way assured that they were watching over me as I traveled. Who needs therapy when you can air out all your problems to a marble slab and invariably come around to a solution?

Southerners remember and recognize the birth dates and anniversaries of the dearly departed. We celebrate them, even if for a fleeting moment, as if they were still with us. In the case of those taken too soon, we imagine what they would be doing had they lived. For the elderly, we are thankful for the end of suffering, pain, and dementia and imagine their great reward found in a land of cloudless day.

We plan ahead for Decoration Day so that we can make our rounds to visit everyone. We surround ourselves with their belongings. Granny’s wedding ring. Pawpaw’s shotgun. A crocheted doily. A family Bible with notes scrawled in the margins. We remember our loved ones in the prime of their lives. Happy, healthy, carefree.

In the South, with its history of war and poverty, disaster and disease, death is just as sure as the fact that grits is always plural. We’ve learned to cope with and even embrace the inevitable with resignation, respect and, often, humor. Is there really any other choice?

I had seen pictures of my traveling companion as a young man. Blond and tanned. Wearing his military uniform. Holding his baby daughter. It was this person with whom I talked during that long car trip from Georgia, not the inanimate jar of dusty remains strapped into the passenger seat. Had he lived, he would have been my father-in-law, and I wanted to make a good impression.

I know it may seem odd, but you know you do it, too. It’s really perfectly natural to talk to the dead. At least to a Southerner.

Until they start talking back, that is.

Born and raised in Citronelle, Atkins now lives with her husband in Birmingham where she is the director of community engagement at WBHM Public Radio. A raconteur at heart, she shares her often funny and sometimes poignant stories about growing up and living in the South in her recent book, “They Call Me Orange Juice,” and at her blog audreyatkinswriter.com.