Have you ever wondered what a thunderstorm looks like from space? Take the word of one Mobilian who’s seen it for herself: “You see the lightning jumping out of the top of the clouds and racing all the way across the sky. It moves quickly, jumping and streaking. And the cloud formations as they’re moving around over deserts and Mobile Bay are just fascinating to watch.”

Capt. Kathryn “Kay” Hire, a retired U.S. Navy pilot, has traveled to space not once but twice, watching the Earth from a distance of 220 miles, a viewonly a handful have ever experienced. And that journey all began from a desk at Murphy High School.

Just before entering high school, Hire came across an article about the first women starting naval flight training in Pensacola. “I was just like, wow!” she reminisces with a chuckle. “And it wasn’t so much, ‘Wow, these women are breaking barriers!’ It was more like, ‘That’s really interesting. I’d be interested in doing that.’”

She explored her options for college with that job in the back of her mind. While interviewing for an ROTC scholarship, her interviewer asked if she’d applied to the U.S. Naval Academy. “To be honest, I’d never heard of the Academy at that point, so I had to answer, ‘What’s that?’” Hire admits with a laugh. She applied and received an appointment in 1977, just one year after the prestigious institution began accepting women. So, she packed her bags and traveled from Mobile Bay to Annapolis, Maryland. From there, she trained as a naval flight officer — just like those women in Pensacola who had sparked her fascination — and flew oceanographic research covering 25 countries on a P-3 Orion Aircraft for three years. In 1993, she became the first female assigned to a combat aircrew. Eventually transitioning from active to reserve duty, she returned to her alma mater, the U.S. Naval Academy, as an instructor in 2014.

Hire obtained her master’s degree in space systems in 1991 and worked as a space shuttle engineer for NASA when another fortuitous opportunity presented itself. She applied to the astronaut program and, in 1995, was welcomed into the exclusive group. Only two years later, she had an assignment: STS-90 (Space Transportation System). She and her crew trained for a year before stepping onto the space shuttle Columbia and blasting off to the International Space Station for two weeks.

“That was the first and only space mission that was 100 percent dedicated to life sciences, ” she explains about her 16-day maiden sojourn. “We had 26 primary experiments studying the brain and central nervous systems of humans, rats, mice, crickets, swordtail fish and oyster toad fish. If you counted all those up, it was actually a couple thousand — a lot of lives!”

Hire delves into the value of these space experiments as though she could talk on the subject for days without tiring. “Think of space as a new kind of lab.” She zealously describes the work she performed with some human cancer cells in the hopes of changing how we treat it.

“If you think about growing these things in a petri dish in a lab on the ground, the cells will grow in a layer, right? But take those into space, and they’re now in an environment where they’re not sensing gravity, so they’ll grow more three dimensional, a little bit bigger. Maybe the spaces between the connections are a little bigger. If we can study the growth, then we can potentially figure out a way to intervene and stop that growth.” Now imagine the exact opposite for the human renal cells she also studied: How could these principles encourage cell growth in human kidneys, which are often damaged by chemotherapy?

“The thing is, this is all about helping people on Earth. It’s not just about, ‘Hey, it’s cool to fly in space!’ We’re doing really important work in that lab.” 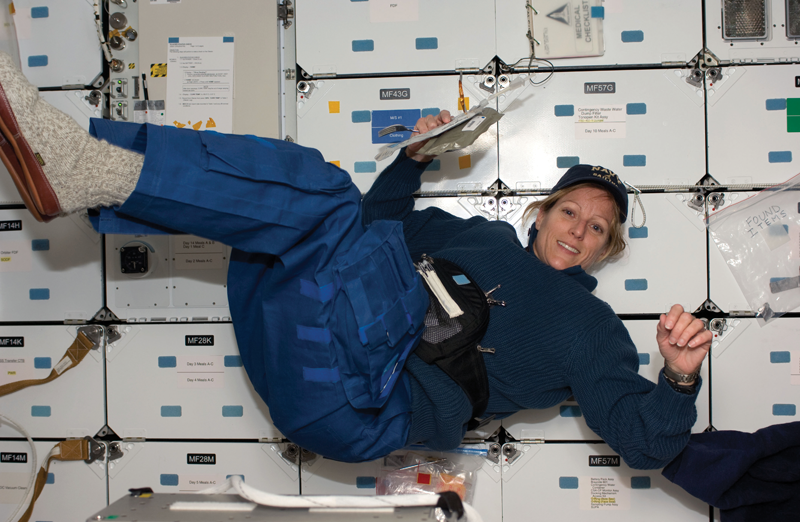 ABOVE On day two of her second mission, Hire floats in middeck with the space shuttle Endeavor in orbit of Earth.

In 2010, Hire ventured back to the final frontier on STS-130 with an extremely different task. She and her crew added on to the International Space Station, leaving her metaphorical fingerprint on the station. In a mere 14 days, the crew of Endeavor traveled to the station and installed two major additions. “It was rewarding because part of adding Node 3 (called Tranquility) provided a space for habitability things: equipment that processed the water, the toilets, the gym. Prior to Node 3, that had all been housed and used within the U.S. laboratory section, which left limited space for experiments, ” Hire explains.

Node 3 opened up more room for space scientists, but their second payload, the cupola (“Like a really big bay window”), has become a beloved section for anyone aboard the station. Because this is where you can view the Earth clearly while in orbit. “The cupola is, on its normal configuration, on the bottom facing toward Earth. Crew can float down there and take photos and videos of Earth views as the space station is flying by at 17, 500 miles per hour. If anybody has free time, that’s where they are! The view is just always changing and always breathtaking.”

For much of our conversation, Hire elaborates on her desire to push today’s students to excellence in whatever fields they desire. Hire speaks from a place of genuine care for these students who, even early on, face immense pressure to plan their lives without taking the time to discover how they could truly make the biggest impact. “Along the way, people get hung up on, ‘This is what I’m supposed to do.’ You have to find your groove, ” she says. “You need math and science, and you need some art to balance it out. Build a good foundation of solid academic performance with sports and other activities, too. So when an opportunity comes, you can raise your hand and say, ‘I can do that.’”

Hire refers to her 35-year career with the navy and NASA as a series of fortunate events. “I never had the intention to say, ‘I’m going to be the first woman to do this.’ I looked at things that were interesting to me and when I saw an opportunity become available, I asked myself, do I have the skills or background for that? Then I was able to raise my hand and throw my name in the hat.”

And she’s grateful for the trail-blazers that came before her — the women who fought to open doors for other women and have them judged by their merit, rather than their gender. Then there is Mobile’s other astronaut.

“I’m not Mobile’s first astronaut, ” Hire shares with reverence. “We had Major Clifton C. Williams from the Marine Corps. Unfortunately, we lost him before he had an opportunity to fly in space.” Williams was killed in 1967 when the plane he piloted experienced a mechanical failure on his way to visit his parents in Mobile.

In early August, Hire retired from the U.S. Navy after three and a half decades of service. Devoted though she was, she admits she never guessed as a young woman that she’d remain there for so long. “I was just talking with some of my coworkers. We’d graduated from the Naval Academy together, and we made the comment that if you’d asked us as midshipmen (what students are called at the Academy) if we would stay 20 or 30 years, we would have laughed until our sides hurt! You can’t predict that, but I’m thrilled that it worked out for me to come back to the Naval Academy. This is where I got my start — after Mobile, of course.” She is still employed by NASA.

Hire has spent much of her life outside of the Bay area, but her love for Mobile holds strong. Because no matter what state (or atmosphere) she lays her head, she says, “I’ll always be a Gulf Coast girl!”