Head down, arms forward, legs bent and ready to leap. The gun fires, and he springs into action, deftly diving off the block and into the pool. He sprints through the water, racing agile competitors to his right and left, all of them with their eyes on the prize.

Such is a scenario that Olympic swimmer Casey Converse experienced hundreds of times as he trained in Mobile, then California, before heading to Montreal in 1976 to compete for the ultimate prize in the Olympics.

“Alabama is big in football and baseball, pretty traditional sports. So to be a swimmer in the 1970s and to have any kind of aspirations for national and international swimming was not common, ” he shares. Though he didn’t win the gold, Converse’s prowess in the water earned him coaching spots at a handful of universities, including his current position at the Air Force Academy in Colorado Springs.

Getting His Feet Wet

Converse, like most local boys, grew up loving the water. “The best place to be in Mobile in the summertime is in the water or right next to it!” he says with a chuckle. As a youngster, he basically “lived in a swimsuit” as he rode his bike to the Mobile Country Club pool in the mornings then made the trek home at the end of the day. “I had sort of an idyllic beginning, ” he elaborates with a hint of nostalgia in his voice. “That was the fun part of swimming.”

By age 12, Converse honed his focus and practiced year-round, swimming summers at the Country Club and winters at the Chandler YMCA (this was before the establishment of CMSA, City of Mobile Swim Association, in 1979). He specialized in distance freestyle events. His coach, Harold Lanier, saw his potential at a young age and, more importantly, helped him maximize on it.

“If you have good stroke mechanics as a kid and a good feel for the water, as your strength grows, your ability to swim fast grows, ” Converse says. He credits Lanier with teaching him those mechanics as well as the work ethic to make it happen — a work ethic that Converse would incorporate into every facet of his life.

Besides stellar coaches, Converse believes he and his fellow swimmers came onto the scene at precisely the right time. “That era of swimming was revolutionary, ” he shares with a sense of awe. “It really launched modern swimming.” For women, it meant trading in heavy, skirted modesty swimsuits for the more hydrodynamic counterparts we see today. For all swimmers, that meant an introduction to wearing goggles and more efficient swimming techniques that helped them break records just about every time they hopped in a pool.

At age 18, as a member of the U.S. men’s swimming team, he was at the Olympic games, swimming furiously alongside other hopefuls. Unfortunately, his 12th place finish in the 400 freestyle event did not advance him to the finals of the Olympic Games. However, he never lost his love for the water. He went on to swim for the Crimson Tide at the University of Alabama, where he continued to shine. In 1977, he became the first person to swim the 1, 650-yard freestyle in under 15 minutes, setting an American record, and he also set an NCAA record for the 100-yard freestyle.

Coaching quickly became his dream job, though it’s not the one he was preparing for in college. “I was going to be an elementary school teacher, ” he reveals, “but I wasn’t very good at it. I had been coaching while finishing up college, and I really loved it. As the doors opened in that direction, I just went through them.”

After graduating, he took a coaching job at an Ohio swim club. From there, he went to New Mexico State University to coach. Three years later, when the Air Force Academy transitioned from military coaches to civilian coaches, Converse leapt at the chance to join their staff, and he’s been happily coaching the women there for nearly 30 years. And based on the fact that he has coached eight of his swimmers to the Olympic trials since he arrived at the Academy,  it appears that he hasn’t lost his touch. 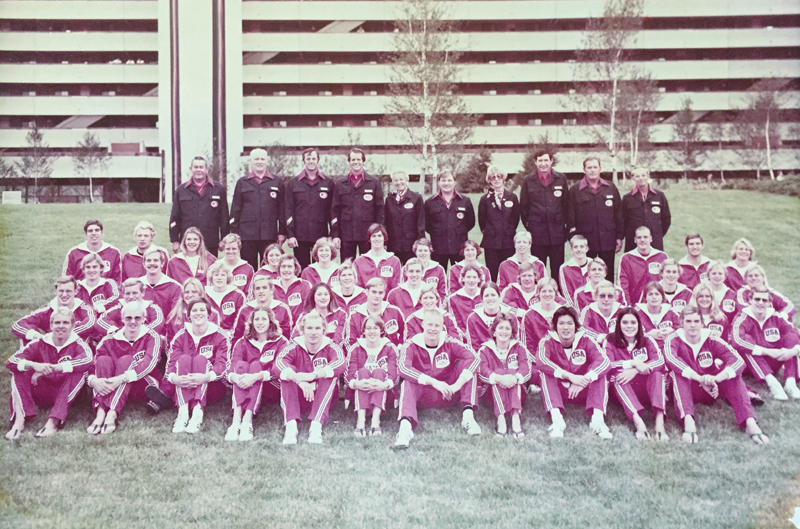 ABOVE In 1976, Casey Converse made it to the U.S. men’s Olympic swim team. Here, he is pictured with both the men’s and women’s teams in front of their dorms in the Olympic Village in Montreal. Converse is in the second row from the front and fourth from the left.

Into the Deep End

Converse’s achievements aren’t limited to the pool. He recently published a book, “Munich to Montreal, ” detailing the events of the 1976 Olympics swimming competition and the scandal that began to unfold thereafter.

In Montreal, the U.S. women’s swim team saw their chances at the gold dwindle away before their eyes. From presumed champions to underdogs, they struggled to keep pace with their East German competitors. Three decades later, the truth came to light: the East German authorities had doped their female swimmers without their consent to achieve national accolades at the 1976 Olympics.

“The East German swimmers knew — they could see the side effects — but their parents were kind of handcuffed because of the government, ” Converse explains stoically. “If you protested too much, you could just sort of be a nonentity. They were very heavy-handed and set on controlling the populace.”

As an 18-year-old at the games, Converse admits he was fairly oblivious to the events, even as other swimmers and coaches had suspicions. So, decades after the fact, why did he write about it? “It really nagged at me for a long time. I just kept waiting for the story to get out there somehow. I figured someone would grab ahold of this. Eventually, I thought, ‘It’s up to me, ’” says Converse.

In 2012, Converse decided to put pen to paper to tell the incredible story of frustration and ultimate triumph that had nagged him for decades. Through years of preparation and building record-breaking skill, these U.S. women — Converse’s teammates — had faced more challenges than they could have imagined in a slanted race. Which makes the games’ (and the book’s) finale even more astounding. (No spoilers here, but it is definitely a sports blockbuster-worthy climax.) So, when he visited the 2012 Olympic trials as a coach, Converse gathered many of the old teammates together for interviews, such as top U.S. swimmer at the time Shirley Babashoff, Wendy Boglio and coach Jim Montrello.

Two years later, USA Swimming, the national governing body for the sport, decided to create a documentary covering the very same topic. The result, “The Last Gold, ” premiered at the LA Film Festival in May of this year, one of the dozen films selected out of approximately 4, 000 entries to be screened. The film’s director has called “Munich to Montreal” the companion book that covers the same material from a different angle.

Converse says, “It seems that even today, women athletes have to struggle to get any kind of recognition. This is a great women’s sports story, and I wanted it to be preserved that way.”

Like any good coach, Converse cares tremendously about his team. Not just their swimming times, workout regimen or which records they break, but the people that they are and will become. “The core values of the Air Force Academy are integrity first, service before self and excellence in all we do. I hope they see where we support and model those three things.”

Converse was with the first woman cadet, Kim Davis, who qualified for the time trials in 2012. And this summer, he accompanied another, Genevieve Miller, to the trials for the 2016 games. Though she did not qualify for the team, his pride at her efforts is apparent.

Converse takes joy in offering his team members discipline and wisdom. It’s also his goal to serve as an example of good leadership, which is of particular importance considering these women will go on to serve in top spots in the armed forces. “In the four years that they’re here at the Academy, I see them grow so much. To be a part of that transition from 18-year-old kid to a 22-year-old adult, an officer in the Air Force, is really a privilege. And here at the Academy, where things are pretty tough, it’s a fun environment.”

He’s coached women exclusively for most of his career, which is part of why the story of the 1976 female Olympians felt somewhat personal for him and definitely worth sharing. “I’m really happy that a women’s athletic story is getting told in some big ways.”

Balancing his writing with coaching proved to be a challenge, but he came out of the experience absolutely golden. Though he plans to take some time off from writing, he mentions with a mysterious yet promising tone, “I have a couple of other things starting to nag at me. I’ll see how it goes. There may be some more stories out there.”

For more information about “Munich to Montreal” and Casey Converse, visit munichtomontreal.com. Purchase a copy on Amazon.