When Frye Gaillard was 16, on a trip to Birmingham, he was within a few feet of Dr. Martin Luther King Jr., who was being arrested. “I couldn’t get that image out of my mind. The dignity of Dr. King, the sadness in his eyes as he was being roughly hauled off to jail. I couldn’t escape the question, ‘What’s going on here?’”

That question became a catalyst for a lifetime of writing about civil rights.

Although Gaillard is among the South’s most accomplished and prolific authors — his latest is a memoir of the 1960s entitled “A Hard Rain” — in person, he is humble and gracious. With forebears who were antebellum planters in South Carolina, and a grandfather and father who were distinguished lawyers in Mobile, his courtly manner comes by tradition. But his genteel presence — a tall, eloquent professor and grandfather — belies a fierce determination to address society’s ills.

“For those of us who grew up with privilege, ” Gaillard tells me over lunch in downtown Mobile, “there’s a lot about social justice that we need to care about.”

Since his first book 40 years ago, Gaillard, 71, has borne out this conviction. “I’m fascinated by people who stand for justice and progress, ” he explains, “what Lincoln called ‘our better angels.’”

He’s shone light on those better angels — and our nation’s contrasting “dark side, ” as he calls it, which he fears is again resurgent — through an array of genres. His latest book  — which clocks in at 673 pages — is his 26th, adding to a rich collection including essays, memoirs and even two children’s book.

In 2004, after a career in North Carolina with the Charlotte Observer, Gaillard returned to Mobile with his wife Nancy, a career educator, and settled into a house on Fowl River. That year also marked the publication of his book “Cradle of Freedom, ” a heralded history of the civil rights movement in Alabama.

At age 60, he was named “Writer in Residence” at University of South Alabama — a role that has “reenergized him, ” he says. While at the university, he has written several books, including a soul-searching trip through the letters of ancestors who fought for the Confederacy. This “nimble parsing of memory and myth, ” wrote USA professor Steven Trout in the foreword to the resulting book, “Journey to the Wilderness, ” resulted in Gaillard’s discovering “that little … fits the Lost Cause version of history that he inherited, like family china, from his Southern elders.”

A documentary based on the book, directed by Mike Letcher, is scheduled to air this summer on Alabama Public Television.

Gaillard says that “Journey to the Wilderness, ” like “Cradle of Freedom” and his newest, “A Hard Rain, ” is “popular history, ” meant to engage the reader with the sweep of story and high drama, often with a personal viewpoint. “I want to write not only about what happened, ” he explains, “but how it felt.”

But for all his outpouring of print, Gaillard is more than an artist in the garret.

“Frye unselfishly takes the time to share his perspectives, abilities and dedication to improving our world with nearly everyone he meets, ” USA president Tony Waldrop tells me. “Through his writings, classroom discussions and public lectures, Frye inspires students and citizens alike with his authentic commitment to social justice issues and a personal knowledge that brings these historical topics to life.”

In this role of public intellectual, Gaillard finds himself crisscrossing the state and region, visiting schools, sitting on panels  and reflecting on topics from voting rights to the Vietnam War. He’s engaged in dialogues on religion, too, and its mandate, from his perspective, for social action.

Gaillard is guided, he says, by Jesus’s Sermon on the Mount, with its emphasis on empathy, compassion and service to others, and lines from the Book of Amos — “Let justice roll down like a river, and righteousness like a mighty stream.”

On April 4, 2018, the 50th anniversary of the assassination of Dr. King, Gaillard was asked to join the roster of speakers at Dexter Avenue Baptist Church. He reflected in his talk on the last three speeches King gave, the final one on April 3, 1968.

In the Montgomery sanctuary, he repeated King’s prophetic words from that Memphis speech: “I just want to do God’s will. And He’s allowed me to go up to the mountain. And I’ve looked over. And I’ve seen the Promised Land. I may not get there with you. But I want you to know tonight that we, as a people, will get to the Promised Land.”

“It was a singular honor, ” Gaillard says, “to speak in King’s church.” 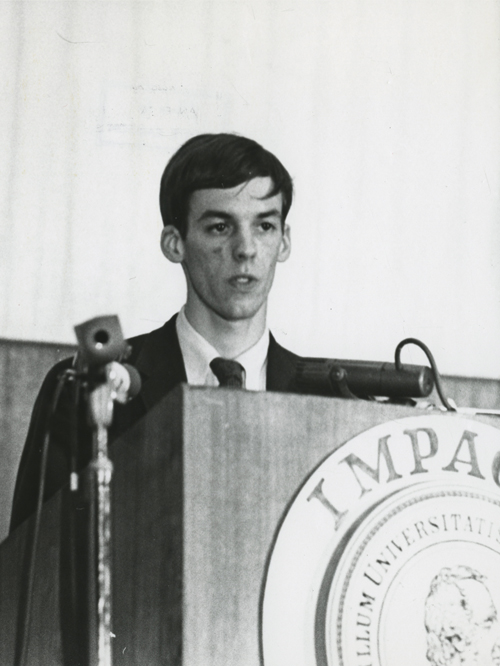 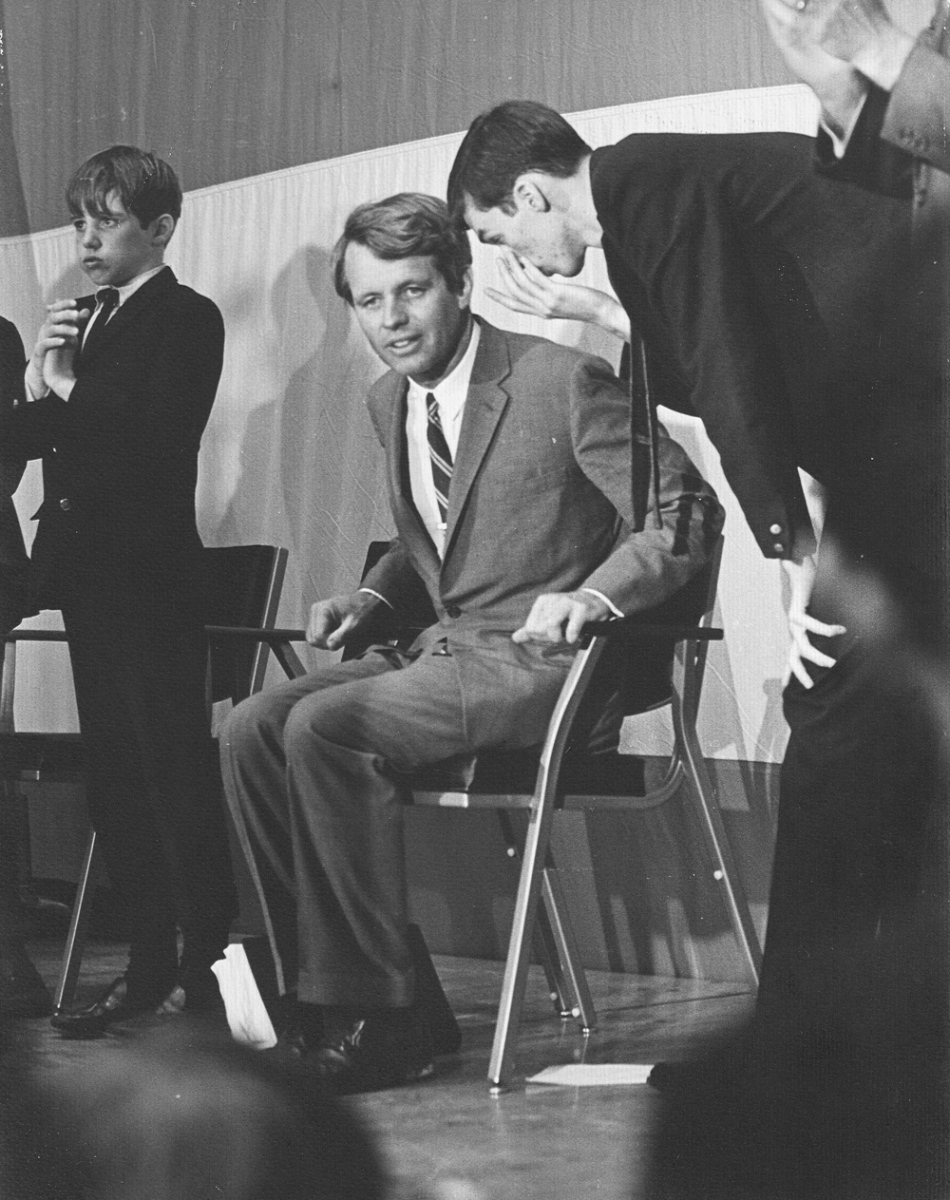 ABOVE In March 1968, a young Frye Gaillard introduced Robert F. Kennedy to Vanderbilt students, inspired by the chance to hear and interact personally with the political and civil rights legend.

Meeting Bobby Kennedy while Gaillard was a student at Vanderbilt was part of the inspiration for Gaillard to write “A Hard Rain: America in the 1960s, Our Decade of Hope, Possibility, and Innocence Lost.”

It was a period of rapid change and turmoil. The first black students were admitted to Vanderbilt during Gaillard’s freshman year, 1964. President John Kennedy had been assassinated the year before. The Vietnam War was raging.

As a college journalist who headed up the campus speakers’ program, Gaillard invited Bobby Kennedy to campus in spring 1968, introduced him and saw magic up close.

“I’ve never seen such joy, passion and urgency in a crowd, ” he recalls. He likens it to the experience of a Bruce Springsteen concert.

When Kennedy was driven to the campus, Gaillard was able to visit with his new hero as the two rode together in the back seat of the car.

The murder of Bobby Kennedy on June 5, 1968, not only devastated Gaillard — “it was overwhelming, ” he says — but left him with a scene that stays deep in his heart.

After shots were fired and Kennedy fell, Gaillard recounts, a 17-year-old busboy at the Ambassador Hotel, Juan Romero, an immigrant from Mexico, cradled Kennedy in his arms, “to protect his head from the cold concrete, ” as Romero said.

“That image, ” Gaillard says of the violence, tenderness and selflessness of that moment, “meant I have to write this book.”

A Child of the Sixties

As we visit, “A Hard Rain” is on the table between us — the title, from a song by Bob Dylan, is superimposed over a photo of young Frye, next to small portraits of John Kennedy, Malcolm X, Joan Baez, Dylan, Gloria Steinem, James Baldwin, Dr. King and Bobby Kennedy — a suggestion of the hundreds of figures from America’s tumultuous decade who are part of this monumental work.

While encyclopedic in its reach, it reads not like a textbook but an interweaving of stories. Often, Gaillard, as narrator, finds a way to make a personal connection to the sweep of national events. He writes, “Living in Mobile, Alabama, I didn’t know much about the sit-ins. Not at first. There were newspaper stories here and there and scattered grumblings among friends of my parents. But my contemporaries and I, all of us white and barely in our teens, had other things on our minds. First of all, there was rock ’n’ roll.”

The invention of the pill, NASA’s first space expeditions, nuclear bomb scares, gay rights, baseball, literature, soul music and the Supreme Court, as well as a cavalcade of other topics, arranged chronologically into 72 chapters, make “A Hard Rain” Gaillard’s “most ambitious book, ” as he acknowledges.

Praise for “A Hard Rain” has poured in, and while Gaillard welcomes it, he remains, true to character, self-effacing. “I don’t want to sound, or feel, high and mighty.”

He’s already working on new projects, neither money nor fame his goal at the end. What does he wish to accomplish as a writer, above all else?

“To leave behind a body of work that matters, ” he answers.

Roy Hoffman, who lives in Fairhope, has written for The New York Times, The Wall Street Journal and The Washington Post. Among his books are the essay collection, “Alabama Afternoons, ” and novels “Chicken Dreaming Corn” and “Come Landfall.” His first novel, “Almost Family, ” is being reissued fall 2018 in a 35th anniversary edition. On the web: royhoffmanwriter.com