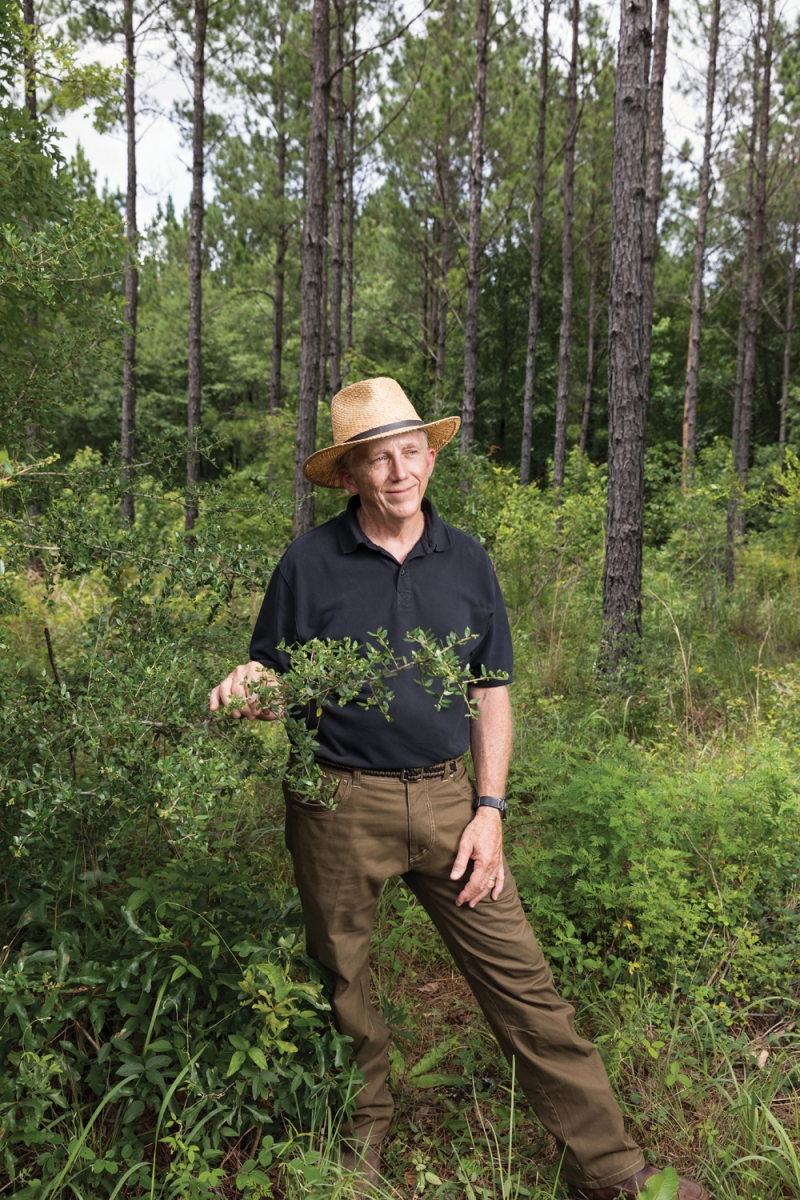 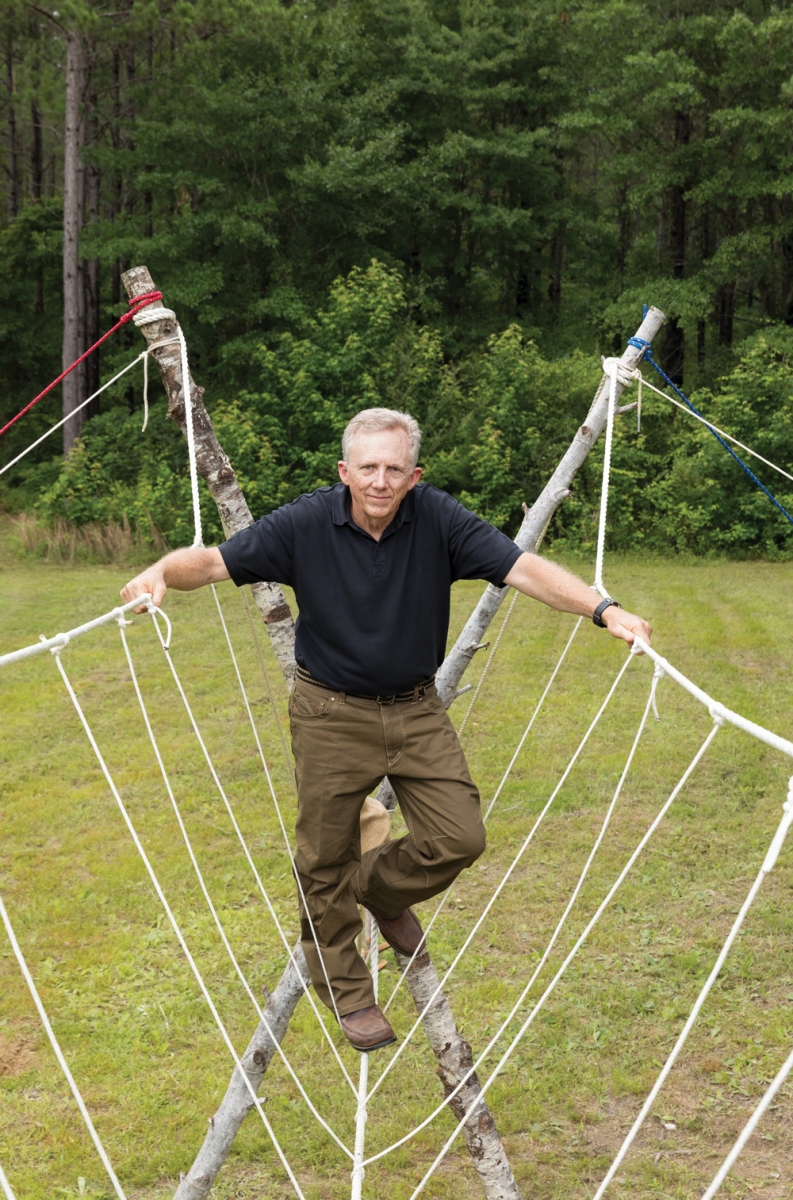 ABOVE RIGHT Yonge stands on the bridge he instructed the teen residents at Pathways Baldwin County to construct. Though the first attempt at the bridge fell short, he came back and helped the teens learn from the failure to create a fun, stable bridge they all had a blast building and crossing.

In mid-September 2004, Hurricane Ivan made landfall in Lower Alabama. With wind gusts of 120 miles per hour, the storm was the strongest that Baldwin County had experienced in nearly a century. Trees fell. Boats in port toppled and sank. Walls and wharves crumbled. And, in Fairhope, Thomas Hospital lost its electricity. Most of the staff and patients started to evacuate; the few who stayed behind locked the doors and hunkered down. Lynn Yonge, a physician on the Eastern Shore, waited Ivan out inside the hospital’s empty, echoing walls.

“As soon as the hurricane passed, those of us who stayed got the keys, opened up the ER and began taking care of chainsaw accidents and things like that, ” he remembers. “But we didn’t have power, we didn’t have other tools we’re used to.”

Situations such as this one are not uncommon. In a flash, Mother Nature can deny us things like electricity and easy access to medicine, ironically at a time when people most need them. When the going gets tough, doctors have to get creative, and that’s exactly what Yonge is teaching medical students to do.

All in a Day’s Work

Yonge has been taking in the outdoors for as long as he can remember. His family began camping when he was around 9 years old. He became an Eagle Scout at age 16. And around 2002, he stumbled across wilderness medicine, a discovery that shaped his entire career.

A soft-spoken assistant professor at the University of South Alabama, Yonge sits on the board of directors for the Wilderness Medical Society and was once a fellow at the Academy of Wilderness Medicine. After more than 100 hours of training, he became certified to teach wilderness medicine to others. His class for senior medical students focuses on how to help others in the event of a disaster, natural or man-made.

“If you’re going to a war-ravaged area or disaster area, ” he starts out, “you shouldn’t be a liability to the people you’re trying to help. Your backpack should be filled with the stuff you need to get to work.” One example? Water pressure. Normally, doctors have pressurized water to clean wounds. What do you do without it? “Get a zip-top bag, fill it with water, cut out a corner and you can use that to clean out a wound, ” Yonge shares matter-of-factly. “As part of training, I take an orange, cut it in half, grind it in the dirt, then I give a student a zip-top bag and tell him or her to clean the orange well enough to eat it.” 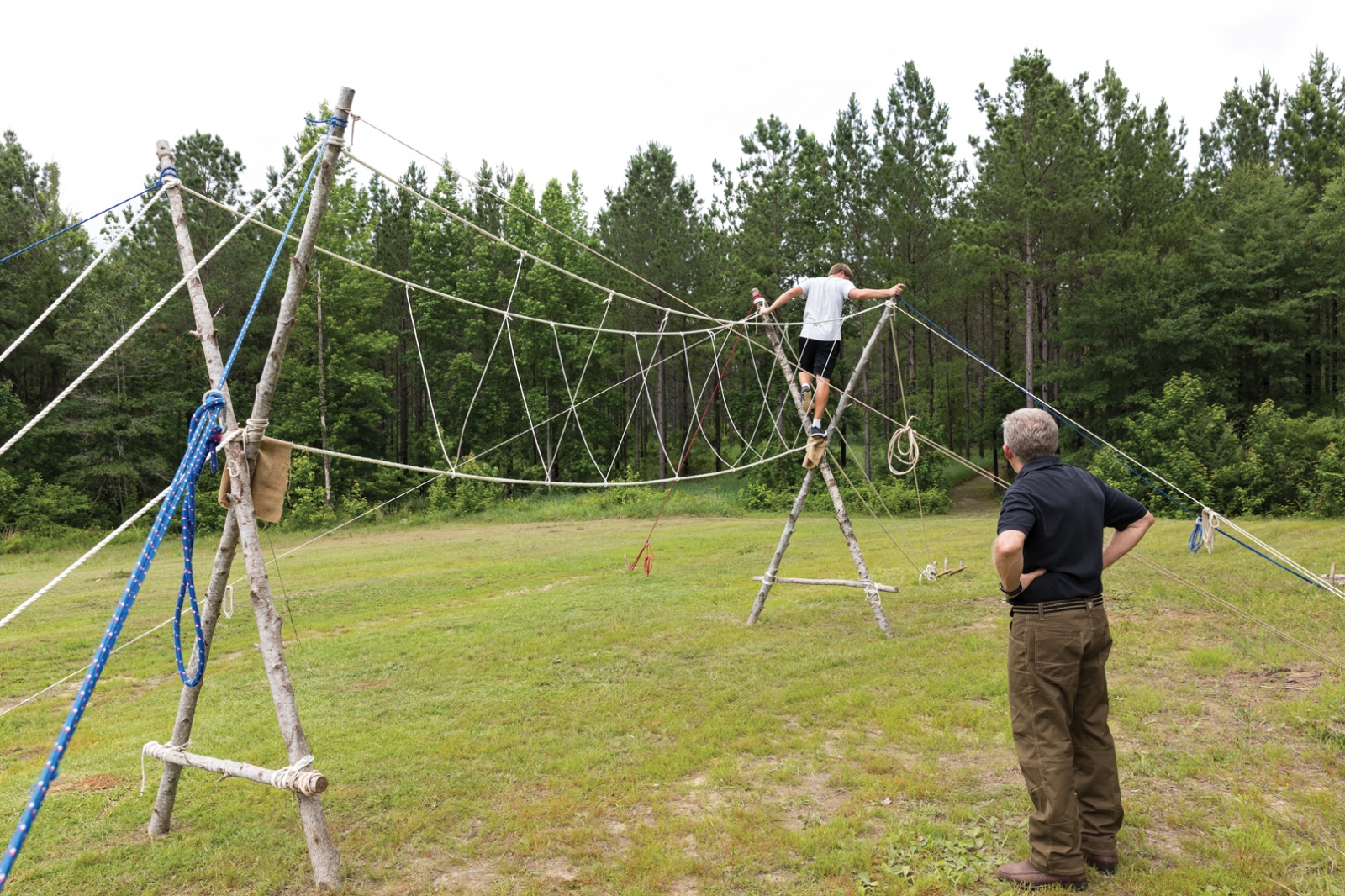 ABOVE Yonge teaches the residents at Pathways of Baldwin County outdoor and wilderness skills, including how to construct fascinating, gravity-defying contraptions. This week, his teens built a “monkey bridge” out of rope and branches. Even the stability pegs were whittled from branches by the residents themselves! After it was done, they clamored to see who could cross it the fastest.

Yonge is a teacher to more than just future doctors. He also mentors groups of at-risk teens through the Pathways of Baldwin County program. “It’s a great job for a doctor, ” he says with a chipper smile. “I get to spend the whole day outdoors, even when it’s raining. Then we get under a porch somewhere. We rarely go inside.”

Whether he’s helping the teens — boys and girls alike — sharpen an ax, build a fire or construct impressive bridges and towers, they’re learning more than just wilderness skills. He explains, “I try to use those skills to teach teens to be self-reliant. I use the outdoors as a classroom for life skills, such as perseverance. I’ll tell them, ‘It’s a hot day, but we still have to do our work.’”

Even when he’s not helping the youngsters overcome a fear of spiders or learn how to tie strong knots, just being outdoors is a kind of therapy all its own. Barriers that seem insurmountable in a classroom suddenly dissipate while strolling through the woods. As he explains it, “We’re all out there hot and sweaty, and that’s when someone will get in stride with me and tell me about his life or some struggle he’s having.” A camaraderie springs up, and Yonge feels he can really help.

We’re chatting in an open field right beside a “monkey bridge” built from tree branches and rope that the teens constructed the previous day. Even the pegs that anchor the entire contraption are whittled from smaller branches. As we talk, a group of boys who had been playing basketball nearby wander over, clamoring to try the bridge themselves. Lining up, they rib each other in good fun, laughing and chatting with Yonge, too — “Doc, ” as they call him.

“I bet I can beat your time!” one shouts, climbing up the rope. They count off, timing each other to see who makes it across the fastest, and “Doc” claps and laughs along with them.

Pride radiates from Yonge like heat off asphalt as pulls out his phone to show off photos of projects he’s guided them on: a 15-foot tower built from branches and rope, a pine straw baler (he pays the kids $4 per bale for clean pine straw), a chicken coop, the monkey bridge standing before us. As he describes the projects, he mentions his gratitude that he was able to build his career and schedule around working with these kids because it’s “one of my favorite things to do.” I ask him why. He’s ready with a heartfelt answer.

“If you step in, you can save a life in a different kind of way. It’s not as dramatic as heart surgery, but if you can change the direction that someone is going in, you may change the trajectory of that life. I find that to be a very hopeful line of work, ” he says. His eyebrows furrow as he adds, “Now, they’ll let you down sometimes because they’re kids — you don’t have the expectation that they’ll be perfect the first time. You just have to keep trying. It’s a calling for me. I’m willing to go the extra mile because they’re the kids who need the most.” 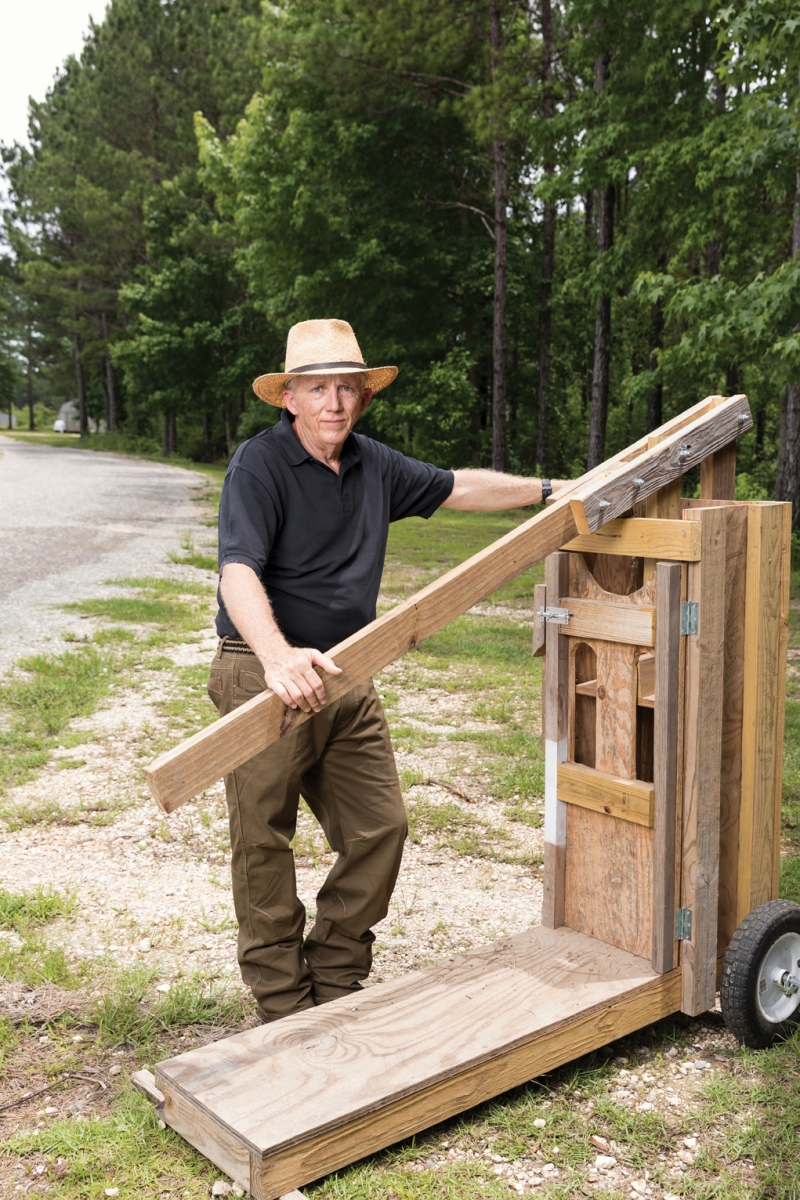 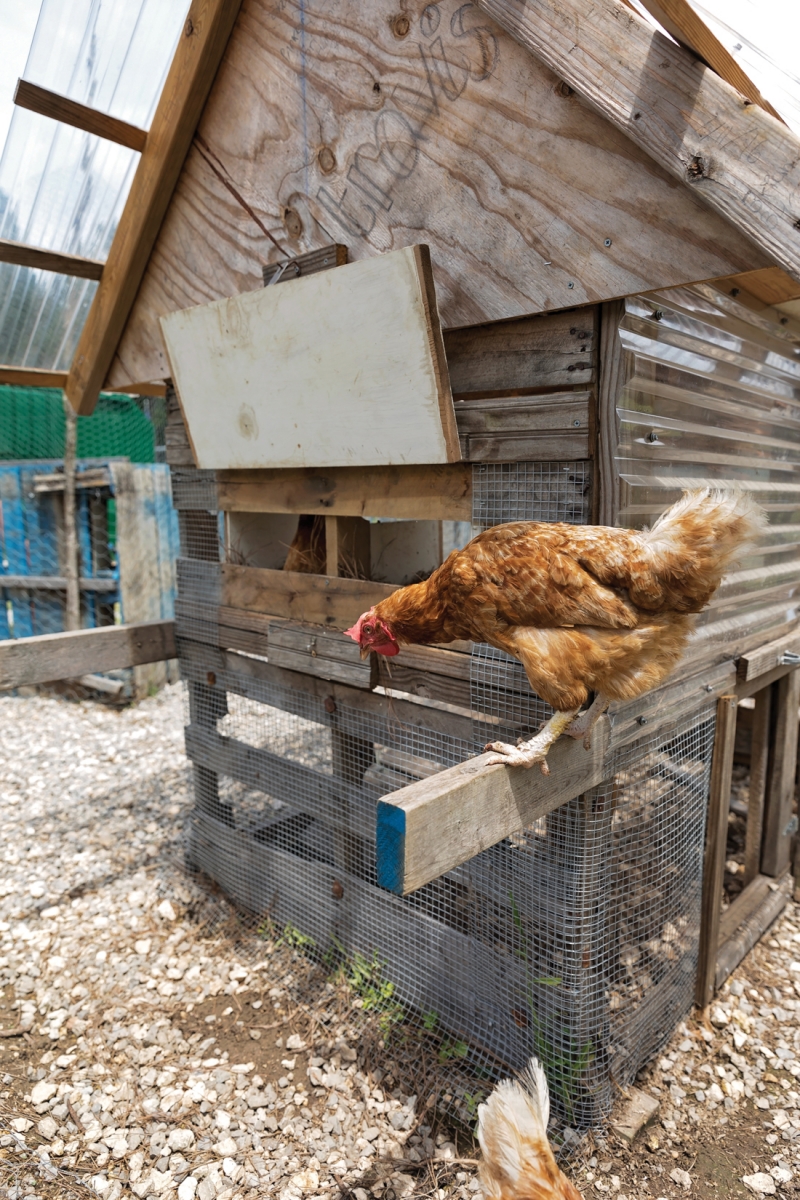 ABOVE LEFT Under Yonge’s guidance, the residents also built a pine straw baler, and Yonge even pays $4 a bale.

ABOVE RIGHT The residents also built a chicken coop and raise chickens themselves, alongside a vegetable garden. All of these projects help instill a sense of responsibility and pride in the residents, Yonge says.

Sometimes, a project has to fail before it can succeed. Watching the boys at Pathways cross the rope bridge one after the other, Yonge tells me the story of the first version of the bridge they attempted. The instructions they were following, an updated version of the Boy Scouts manual he used as a child, failed to specify the size of the whittled pegs needed to secure the bridge. Their pegs were too weak and, while testing out the bridge himself, the entire thing fell to the side.

“I landed on my feet, which I was pretty proud of, ” he assures me, “but the post hit me on the back and it broke a rib.” After he healed up, though, he went right back out and used the fall as a lesson to the residents there. “I just couldn’t let them see it end like that, ” he explains. “You have to persist.” The new bridge stands strong, as does Yonge.

Once a year, Yonge brings his medical students to Pathways for a day to work with the teens, the perfect melding of both sides of Yonge’s work. “I’m the luckiest guy in the world because I get to use the outdoors skills to teach life lessons to kids and to medical students, and it allows me to spend time outside. So I get something, they get something. It’s a good balance.”