Every chair is occupied. Cheerful, hectic chatter fills the wood-paneled room, and cloudy skies peek through the large front windows. A white-haired man with kind eyes and a quiet disposition takes to the podium. The room falls silent.

“My name is Phillip Fields. I am 67 years old, and I have leukemia, ” the USA College of Medicine professor declared to a group of adult cancer survivors in April. No frills, no drama. Just the facts.

The humble, reserved man who stands before the room seeks no pity for his condition. Instead, he empowers those around him to embrace the life they possess. “A passion is the fuel that powers our engines, ” Fields states. “It is our ‘why, ’ and it’s especially important during challenging times.”

Fields addresses the crowd at Camp Bluebird — a program of Providence Hospital that lends support to adult cancer patients and survivors — with a pervading sense of calmness as he relays his story. He began running marathons in the mid-1980s, completing an average of one marathon per year for the two and a half decades that followed. Despite the dozens of races he has completed, one in particular means more to him than any other: the Boston Marathon.

“It is so exciting that for me it doesn’t get old. Boston is the only marathon that you have to qualify for to run. I spent 11 years trying to reach the qualifying time, and I got in on the 100th anniversary race (in 1996), so that was special for me. All marathons are special because of the thrill of completing them, but the Boston is just incredible.” He can hardly contain his smile.

He qualified and ran it for the second time in 2004. In April 2015, he took on the Boston Marathon for the third time, this time as a charitable ambassador for the ALLY Foundation, which combats sexual violence with education and science. In just a few short months, Fields raised $10, 000 for the organization — double the amount they require of their representatives in about half the time allotted. “I reflected on that generosity while running this marathon. That certainly helped me through the four hills of Newton.”

It was while preparing for the Boston again in 2007 that Fields first noticed something was amiss. “I had just qualified at the First Light Marathon in Mobile. Three weeks later, I was struggling to reach three miles, ” Fields remembers. “Over the next six months, I underwent a range of tests. Everything came back normal. They finally just decided it was my age.”

Only at his annual checkup a few months later did the truth begin to come to light. Several more weeks filled with numerous tests finally pinpointed the problem: leukemia. The outlook was bleak; doctors predicted he had five to seven years to live. “There were probably a number of questions I should have asked, but all I could muster was, ‘Can I keep training?’”

The doctors advised him against continuing to train, citing health risks and the overwhelming fatigue the disease and treatment generate. Faced with a devastating discovery, Fields had a decision to make.

“I could train each day for the next marathon and continue my cross-country sightseeing, or I could sit in my comfortable lounge chair with my TV remote and wait for time to pass. I kept running.” 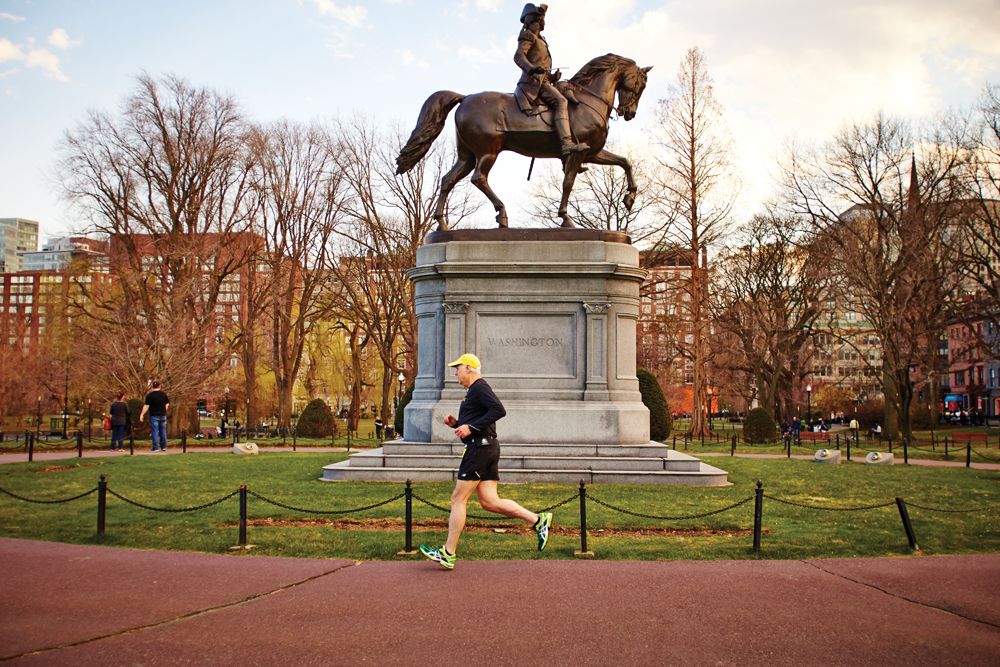 While he missed the Boston Marathon in 2007, he continued training for a year, until he could complete 15 miles without stopping. Emboldened by his progress, he registered for a marathon in Pensacola — his first since the diagnosis. By mile four of the race, however, he felt his body screaming for relief and almost called it quits at the halfway mark. “In my mind, I’m telling myself that if I quit now, if I don’t complete the marathon, I will never complete one again, ” Fields says, his voice steady as the crowd eagerly hangs on every word. “To quit would be to end my dream of running the Boston Marathon again.” Tempted by defeat, Fields pushed on.

Using every ounce of determination he possessed, Fields crossed the finish line in Pensacola. Though exhausted, Fields realized with amazement that he could persevere. He set a goal to run a marathon in every state and Washington, D.C., by the end of 2012: 51 marathons in 47 months.

“Someone asked me, ‘Why do you need to finish by the end of 2012? What’s the rush?’ That person couldn’t appreciate that the sand was rapidly escaping my hourglass.” Fields pauses. “I was two years into my seven. As my hourglass was purged of sand, I used this leukemia to my advantage.”

After six months of chemotherapy, in 2011 Fields learned his cancer was in remission. It has remained in remission ever since, a special blessing considering it occurs in only 40 percent of cases similar to his. Even with beginning chemotherapy in January 2011, Fields refused to succumb to his ailment and completed his goal in December 2012 with 52 marathons. Some months he raced three consecutive weeks and had to plan around chemo sessions — but he finished every mile.

Meeting his deadline did not come easily, though. Before the cancer, physical training reigned supreme; after, even four years into remission, mental determination proves most crucial. “Before the leukemia, I would hit the wall generally around mile 23 or 24. You can always push to the finish at that point. With the leukemia, I never know when it’s going to impact my running. I’ve hit the wall at four miles, at six miles and sometimes at 24. I’ve had some days where it’s so intense I absolutely cannot run.”

After he finishes his speech and the applause has ceased, dozens of survivors line up to share their own stories with Fields. He listens to them all, answering questions and partaking in just a moment of their journeys with them. “I don’t have to look very far to find someone whose running shoes are in worse shape than mine, ” Fields says after the room empties. “What good comes from suffering? You take it and go help someone else.”

He continued to run marathons after the 2012 deadline, of course, completing another 14 races (and counting) since then. Through all of this, Fields indeed extended his goals beyond personal fulfillment. Fields developed a website, runningwithleukemia.org, after meeting a young girl with the same disease. The site raises money for Nemours, which provides health care services to children. Individuals or groups can sponsor Fields on his races, and funds go directly to Nemours. Past sponsors include fellow faculty and USA College of Medicine classes that Fields has taught, going as far back as 2004.

“I always stress to my students that you can do the bare minimum that it takes to get by, but you want to be the best doctor you can possibly be. If they see how I push and achieve what I want to, I hope they will do the same.”

The site also details his running and medical history while taking visitors on a visual journey around the U.S. Breathtaking photos of wildlife and faraway marathon destinations create a timeline of his excursions, inviting viewers to travel alongside him as he races his way around the the world.

His current plans? Conquering Canada! With only Saskatchewan and New Brunswick left, Fields plans to finish the northern provinces by the end of the year. He also aims to complete 100 post-diagnosis races before his 70th birthday: that’s another 33 marathons in 30 months — and about 865 miles.

Despite however many miles lie ahead, the ones traversed in Boston will always stay with him. “I savored every moment of the journey through Boston this April. In the past, I focused more on my pace than what was going on in the background. But not this time.”

And on he runs.